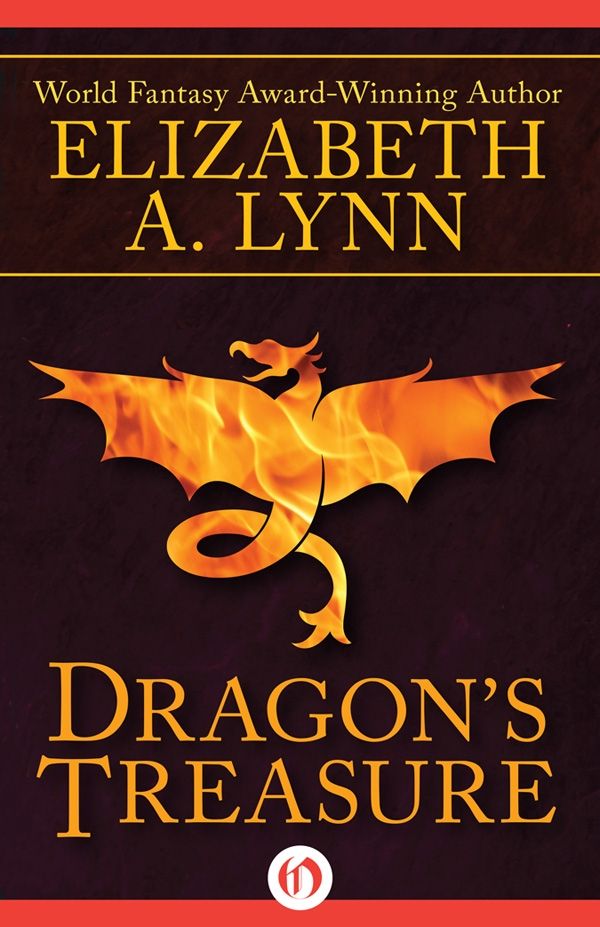 Dragon is a fearsome creature. It is born of the sun, and so incendiary is its nature that neither stone nor water nor air nor any other element can withstand the fire that lives in its blood. A young Dragon comes whole from the womb of its mother. Even as it is born, the mother dies, and the young one feeds on its flesh.

Dragon is so strong that not the most extensive space, nor the highest obstacle, can contain its flight. It may kill by claws, fangs, or fire. The significance of its color is as follows: azure for wisdom, white for patience, black for ferocity, silver for fidelity, gold for incorruptibility, red for sacrifice.

The span of Dragon's life is short, far shorter than the span of human lives.

—A. Panati:
An Uncommon Bestiary

An ice storm blew across the hills that night. It left the tree branches bowed and crystalline. All night the lovers heard them tinkling and snapping.

"It sounds like an army moving through the wood," the woman murmured sleepily.

"Not my army," the man said. "My men are quiet when they travel."

The woman laughed, and rubbed her face against his shoulder. Despite the freezing cold outside, the cottage was dry and warm. Quilts lay unheeded at the foot of the bed. Across its single room a pine-scented fire burned in the hearth, but the warmth came mostly from the man. He was clean-shaven, fair-skinned and golden-haired, and extraordinarily beautiful. Although he was young, scarcely twenty years of age, his face was an adult's, not a boy's: he was a man who could command armies, and did.

Beside his long, densely muscled frame, the woman appeared even slighter than she was. She was compact, with a narrow, heart-shaped face. Her rich dark curls were the color of new-turned earth. She trailed her fingers along his chest.

"Wake up," she whispered.

He snaked his arm up from the bed and pulled her on top of him.

After lovemaking they lay side by side. The pale March light slid through the cracks in the window shutter. The man stirred. "I should go." The fire woke beneath his blue gaze. A candle leaped to life in its sconce. He reached for his clothes. The woman twitched the soft silk shirt from his fingers and twined it teasingly around her shoulders.

Grinning, she shrugged into it. It fell below her knees.

In response, she went quickly to the door of the tiny cottage, unbarred it, and walked barefoot into the winter dawn. He followed her.

She fled, laughing and shivering, around the rear of the hut. He caught her. He scooped her into his arms. His body was warm. She butted him fiercely in the chest.

"It's yours." He carted her inside the cottage and dumped her on the bed. She pulled a quilt around her like a shawl and sat cross-legged.

"How are the boys?" she asked.

"They are well. Kaji wants a sword, so he can come with me to fight the Isojai." For four years now bands of Isojai had come across the border into Issho, looting and burning. Pohja Leminin had sent his couriers riding through Ryoka, to call the lords together with their armies. The Black Dragon had led his men to war, and brought them back triumphant.

"Changelings grow more swiftly than other children," he said. "And dragon-children develop especially swiftly. I was a man at twelve."

"And Tenjiro? Does he also want a sword?"

A shadow crossed Kojiro Atani's face. "No. He is not so vigorous as his brother."

She had never seen his sons. She pictured them—flame-haired imps, the image of their father—in Dragon Keep, chasing through corridors and down stairways into the fragrant, seething kitchen where Jon Duurni, the castle cook, was king. She knew those corridors well. She had been born within the Keep. Her mother, Wina, had been maid to Atalaya Atani, the Crimson Dragon, ruler of Dragon Keep, this man's mother, and her father had served in the garrison.

Kojiro Atani had been her lover for over two years. After his wife died he had stayed away for a few months, but then he had returned, hungry for her. She had not been a virgin. He did not care. She was older than he was. It did not trouble him. He wanted her because she matched his lust, and because she was not afraid of him. Hana Diamori, who had died birthing his sons, had feared him to the point of terror. His soldiers feared him, too. They had good reason. She knew what punishments he meted out. She had seen the broken bodies hanging on the castle walls. Outside Talvela, her father had told her, he had ordered a deserter flayed. Earlier that winter his men had brought him a man accused of raping his own daughter, a child of twelve. The lord had ordered that he be stripped, tied to stakes, and left to die in the snow.

He could also be extraordinarily generous. Four years before, on a battlefield outside Ruitsa, in Issho, Reo Unamira had flung himself between a charging Isojai and his unhorsed liege. For that loyalty Kojiro had given him land and gold, enough to build a house, and to hire other people to serve him. He talked now as if he were a lord himself.

"What news from the border?" she asked. "Will the raiders return?"

"Not now. It's winter. No one makes war in winter."

"Do you think they'll come again?"

He shrugged. "If they do, we'll kill them again." He reached for his boots. "Where's your father?" he asked.

"Gone to Sorvino. He left yesterday. He has a woman there."

"Her name's Lena. She's a widow. She's cousin to the lord of the city."

Resting his big hands on his knees, he said, "You know your father has been after me to marry you."

She arched her back, and moved her body in the silken shirt. "I like it when you come to me."

"Are you so certain of me?"

"Are you bored with me? Ah, well. I suppose I shall have to find another lover."

Kojiro Atani's big hands flexed like claws. "You do and I'll kill you both," he growled.

She laughed, and bit his ear.

She walked into the snow to say farewell to him. He climbed the hill to the ridgetop, and Changed. Night draped the hill an instant, and he rose gleaming from it, immense and terrible, his ebony wings soft as cloud, his great arched neck crested with scarlet.

She watched him fly toward the Keep. Her eyes stung briefly with tears. She scrubbed them away. Tears were useless. She returned to the cottage. Sitting on the bed, she smoothed the shirt over her delicate, rounded belly with her palms.

It was too soon for the babe inside to move, but she knew it was there. She had felt her body changing. She had not meant to have a child. She had taken fennel, but the herb did not always work, especially when used against the dragon folk.

Her father did not know, yet, that she was pregnant. He would know soon enough, of course. There was no way to hide it. He would want to know the father's name. She had no intention of telling him. He might guess, of course, but there would be nothing he could do if she refused to tell him, except beat her, and she did not care about that. She had made the arrangements months ago. She was going to Sorvino. Lena had invited her to stay with her.
I will introduce you to Marion,
the woman had said.
His wife's left him; run off with some doctor, I heard. He needs consoling. You would captivate him, I know.

Marion diSorvino was older than she was, closer to forty than thirty, Lena had said. He had given his wife two children, both girls, but she had taken them with her when she left him, and he had, not surprisingly, disowned them both. She had never met a man she could not dazzle. Pregnant or not, she was certain she could make him want her.

Kojiro would be angry when he learned that she had left his domain, but he would not come after her: his dignity would not allow it. He would forget her, and find another lover. Karadur Atani, the little flame-haired imp who would one day rule this land, would never know his half brother. It was necessary. Cruel as the dragon-kindred could be to their subjects, they were lethal to one another. She was of Ippa; she knew the stories. Lyr the dragon-king had killed his wife. The sons of Lyr had killed each other. Atalaya Atani, the Crimson Dragon, had disappeared in the middle of a thunderstorm, and it was said (very softly) by some in the domain that she and Kojiro had quarreled, and in the heat of that dispute the dragon-lord had killed his mother. Iva did not believe that, but knowing Kojiro Atani's temper, she understood how it was that the whispered tale persisted.

Even the small sons of Kojiro Atani had been touched by the dragon curse. Tenjiro, the youngest, had come from the womb bleeding from the claws of Karadur, his brother. Those same claws had torn Hana Diamori Atani inside. She had bled to death.

It would not happen to her. The baby growing in her womb was not a dragon-child. She was sure of it. When first she realized she was pregnant she had considered pennyroyal, but the thought only lasted a moment. She wanted this baby.

She folded the quilts, and laid them away in the chest. She fastened her knife about her waist. It was a good knife, sharp and well balanced. It had come to her from her grandmother, her mother's mother. She put sand on the fire. She took her staff from its place beside the door. The sun had risen: the peaks of the snowy mountain were alight with flame. The day was warming. She turned her back to the cottage, knowing that she would not come there again, and walked up the treacherous slope of the hill toward the ridgetop, and home.

In the house on Coll's Ridge, the outlaws were arguing again.

Wakeful in her upstairs chamber, Maia Unamira diSorvino sat silent in the moonlight. The Hunter's Moon, full and diamond-bright, blazed over the dark tree-covered hills. The men in the hall below were drunken and joyful. They had ridden out at sunset, her brother at their head. They had returned hours later, clamoring as if they had conquered a kingdom.

The noise rose to a crescendo. Fenris, motionless in her place beside the door, swiveled her fine pale ears back as if the shouting hurt. Morga lifted her dark narrow head and gazed at her mistress.

Someone whooped. "I win!" a man roared. She thought it was Nils. "Pay me, you luckless devils!" Suddenly the shouting ceased. Treion had tired of the noise at last. The yelling did not resume. Maia stretched her arms above her head. Her muscles ached.