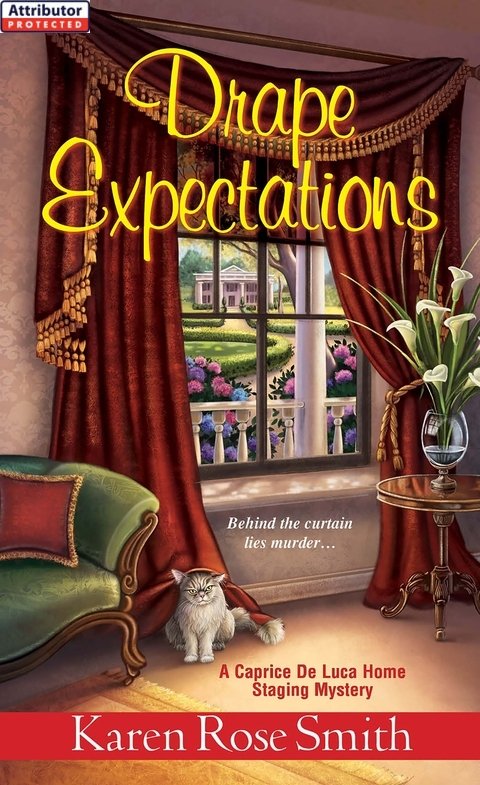 LUNCH . . . WITH A SIDE OF MURDER
They were digging more deeply into their Thai food when Caprice's cell phone played.
“I'd better check this,” she said to Roz. “Juan is at the house we're going to be staging and he might have run into a problem.”
But when she glanced at the screen, she saw Ace's face. Uh oh, just what was she going to say to him? She swiped the screen and put the phone to her ear. “Hi, Ace. What's up?”
“Caprice . . .” Ace's voice sounded strained and very strange. “I'm at Alanna's house,” he continued as if there was something wrong with that.
“Does Alanna need something?”
“No, sheâ” There was silence . . . absolute silence.
“Ace? What's going on?”
“Alanna's here, Caprice, but the thing isâshe's not breathing. Her eyes are wide open. She has no pulse. I think she was strangled!”
Books by Karen Rose Smith
Â
Â
STAGED TO DEATH
Â
DEADLY DÃCOR
Â
GILT BY ASSOCIATION
Â
DRAPE EXPECTATIONS
Â
Â
Published by Kensington Publishing Corporation
Drape Expectations
Karen Rose Smith

Because You Are Mine Part III: Because You Haunt Me by Beth Kery
Kyle's Modern Montana Bride (The New Montana Brides Book 6) by Susan Leigh Carlton
Class Of Desire (Contemporary Romance) by Wilson, Linda
Progress (Progress #1) by Amalie Silver
Fly Me to the Moon by Alyson Noel
Please by Darbyshire, Peter
Black Sheep by Tabatha Vargo
The Lich by Adventure Time
Short Century by David Burr Gerrard
The Cypress Trap: A Suspense Thriller by JC Gatlin