Read Dreaming of the Bones Online

Dreaming of the Bones 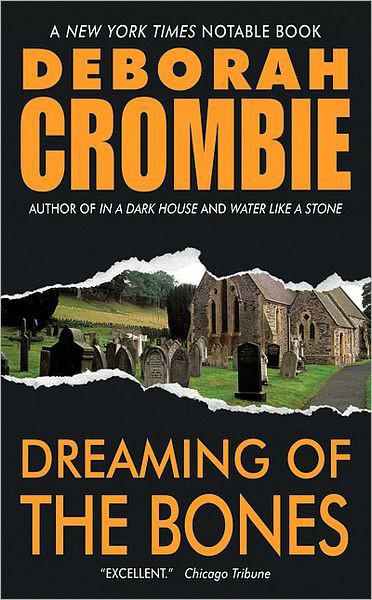 ALSO BY DEBORAH CROMBIE
:
All Shall Be Well
A Share in Death
Leave the Grave Green
Mourn Not Your Dead

Grateful acknowledgment is made to Carolyn Heilbrun and Ballantine Books for permission to reprint from the following previously published material:

S
CRIBNER
and design are trademarks of Simon & Schuster Inc.

This book is for T
ERRY
,
with gratitude for her voice,
among many other things

Thanks are due: Dr. Mary Archer, for her gracious hospitality in inviting me to visit her home, The Old Vicarage, Grantchester, and for allowing me to see her Rupert Brooke archives (complete with ghost stories); to Jane Williams, personal assistant to Dr. Archer, and to Mary Ann Marks, for their kindness in showing me around The Old Vicarage; to Dr. Karen Ross, M.D., of the Dallas County Medical Examiner’s Office, for her help with poisons and toxicology; to Betty Petkovsek, R.Ph., for her pharmaceutical advice; to Diane Sullivan, RN, BSN, for her help with other medical matters; to Paul Styles, retired Chief Inspector, Cambridgeshire Constabulary, for help with police procedures; to Terry Mayeux, Barbara Shapiro, and Carol Chase, for their reading of the manuscript; to the members of the EOTNWG, for the same; and to my husband, Rick Wilson, for his patient and continuing technical support.

D
REAMING
OF
THE
B
ONES

Where Beauty and Beauty meet

All naked, fair to fair,

And scattering bright the air,

With soft and drunken laughter;

Veiling all that may befall

R
UPERT
B
ROOKE
,
from “Beauty and Beauty”

The post slid through the letter box, cascading onto the tile floor of the entry hall with a sound like the wind rustling through bamboo. Lydia Brooke heard the sound from the breakfast room, where she sat with her hands wrapped round her teacup. With her morning tea long gone cold, she lingered, unable to choose between the small actions that would decide the direction of her day
.

Through the French doors at the far end of the room, she could see chaffinches pecking at the ground beneath the yellow blaze of forsythia, and in her mind she tried to put the picture into words. It was habit, almost as automatic as breathing, this search for pattern, meter, cadence, but today it eluded her. Closing her eyes, she tilted her face up towards the weak March sun slanting through the windows set high in the vaulted room
.

She and Morgan had used his small inheritance to add this combination kitchen/dining area to the Victorian terraced house. It jutted into the back garden, all glass and clean lines and pale wood, a monument to failed hopes. The plans they’d had to modernize the rest of the house had somehow never materialized. The plumbing still leaked, the pink-and-white-striped wallpaper peeled delicately from the walls in the entry hall, the cracks in the plasterwork spread like aging veins, the radiator hissed and rumbled like some subterranean beast. Lydia had grown used to the defects, had come to find an almost perverse sort of comfort in them. It meant she was coping, getting on with things, and that was, after all, what was expected of one, even when the day stretching ahead seemed an eternity
.

She pushed away her cold cup and rose, tightening the belt of her dressing gown around her slight body as she padded barefoot towards the front of the house. The tile felt gritty beneath her feet and she curled her toes as she knelt to gather the post. One envelope outweighed the rest, and the serviceable brown paper bore her solicitor’s return address. She dropped the other letters in the basket on the hall table and ran her thumb carefully under the envelope’s seal as she walked towards the back of the house
.

Freed from its wrapping, the thick sheaf of papers unfolded in her hands and the words leapt out at her:
IN THE MATTER OF THE MARRIAGE OF LYDIA LOVELACE BROOKE ASHBY AND MORGAN GABRIEL ASHBY
… She reached the bottom of the stairs and stopped as her brain picked out words from among the legalese.
FINAL DECREE … PETITION OF DIVORCE GRANTED THIS DAY
… The pages slipped from her numb fingers, and it seemed to her that they drifted downwards, cradled on the air like feathers
.

She had known it would come, had even thought herself prepared. Now she saw her hollow bravado with a sudden sickening clarity—her shell of acceptance had been fragile as the skin of algae on a pond
.

After a long moment she began to climb the stairs slowly, her calves and thighs aching with the burden of each step. When she reached the first floor, she held on to the wall like an unsteady drunk as she made her way to the bathroom
.

Shivering, shallow-breathed, she closed and locked the door. The motions required a deliberate concentration; her hands still felt oddly disconnected from her body. The bath taps next; she adjusted the temperature with the same care. Tepid—she’d read somewhere that the water should be tepid—and salts, yes, of course, she added the bath salts, now the water would be warm and saline, satin as blood
.

Satisfied, she stood, and the deep blue silk of the dressing gown puddled at her feet. She stepped in and sank into the water, Aphrodite returning from whence she came, razor in hand
.

Victoria McClellan lifted her hands from the keyboard, took a breath, and shook herself What in hell had just happened to her? She was a biographer, for Christ’s sake, not a novelist, and she’d never experienced anything like this, certainly never written anything like this. She had felt the water slide against her skin, had known the seductive terror of the razor.

She shivered. It was all absolute rubbish, of course. The whole passage would have to go. It was full of supposition, conjecture, and the loss of objectivity that was fatal to a good biography. Swiftly, she blocked the text, then hesitated with her finger poised over the delete key. And yet… maybe the more rational light of morning would reveal something salvageable. Rubbing her stinging eyes, she tried to focus on the clock above her desk. Almost midnight. The central heating in her drafty Cambridgeshire cottage had shut off almost an hour ago and she suddenly realized she was achingly cold. She flexed her stiff fingers and looked about her, seeking reassurance in familiarity.

The small room overflowed with the flotsam of Lydia Brooke’s life, and Vic, tidy by nature, sometimes felt powerless before the onslaught of paper—letters, journals, photographs, manuscript pages, and her own index cards—all of which defied organization. But biography was an unavoidably messy job, and Brooke had seemed a biographer’s dream, tailor-made to advance Vic’s position in the English Faculty. A poet whose brilliance was surpassed only by the havoc of a personal life strewn with difficult relationships and frequent suicide attempts, Brooke survived the late-sixties episode in the bath for more than twenty years. Then, having completed her finest work, she died quietly from an overdose of heart medication.

The fact that Brooke had died just five years before allowed Vic access to Lydia’s friends and colleagues as well as her papers. And while Vic had expected to be fascinated, she hadn’t been prepared for Lydia to come alive. She’d seen Lydia’s house—left to Morgan Ashby, the former husband, who’d leased it to a university don with two small children. Littered with Legos and hobbyhorses, it had seemed to Vic to retain some indefinable imprint of Lydia’s
personality—yet even that odd phenomenon provided no explanation for what had begun to seem perilously close to possession.

Lydia Lovelace Brooke Ashby
… Vic repeated the names in her mind, then added her own with an ironic smile.
Victoria Potts Kincaid McClellan
. Not as lyrical as Lydia’s, but if you left off the Potts it had a bit of elegance. She hadn’t thought much about her own divorce in the past few years—but perhaps her recent marital difficulties had caused her to identify so strongly with Lydia’s pain.
Recent marital difficulties, bloody hell
, she thought with a sudden flash of anger. Couldn’t she be honest even with herself? She’d been left, abandoned, just as Lydia had been left by Morgan Ashby, but at least Lydia had known where Morgan was—and Lydia hadn’t a child to consider, she added as she heard the creak of Kit’s bedroom door.

“Mum?” he called softly from the top of the stairs. Since Ian’s disappearance, Kit had begun checking on her, as if afraid she might vanish, too. And he’d been having nightmares. She’d heard him whimper in his sleep, but when she questioned him about it he’d merely shaken his head in stoic pride.

“Be up in a tic. Go back to sleep, love.” The old house groaned, responding to his footsteps, then seemed to settle itself to sleep again. With a sigh Vic turned back to the computer and pulled her hair from her face. If she didn’t stop she wouldn’t be able to get up for her early tutorial, but she couldn’t seem to let go of that last image of Lydia. Something was nagging at her, something that didn’t quite fit, and then with a feeling of quiet surprise she realized what it was, and what she must do about it.

Now. Tonight. Before she lost her nerve.

Pulling a London telephone book from the shelf above her desk, she looked up the number and wrote it down, deliberately, conscious of breathing in and out through her nose, conscious of her heart beating. She picked up the phone and dialed.

How to Make Her LET GO & GIVE IN: The No-Bullshit Guide to Great Sex by Stan Findus
03 - Evolution by Greg Cox - (ebook by Undead)
All the Broken Pieces by Cindi Madsen
Pizza Is the Best Breakfast by Allison Gutknecht
Portland Noir by Kevin Sampsell
Captain Future 22 - Children of the Sun (May 1950) by Edmond Hamilton
The Heart Remembers by Irene Hannon
Caribbean Heat by Sky Robinson
Fire Below by Yates, Dornford
A Simple Truth by Ball, Albert