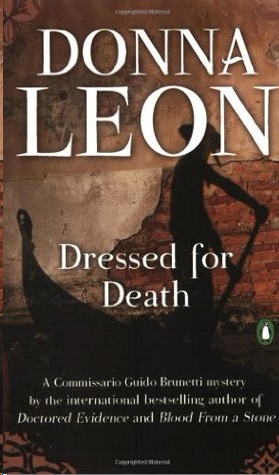 Deceived
by my death

Deprived
of every hope and counsel

Tears
of pain flow from her eyes.

The
shoe was red, the red of London phone booths, New York fire engines, although
these were not images that came to the man who first saw the shoe. He thought
of the red of the Ferrari Testarossa on the calendar in the butchers’ showers,
the one with the naked blonde draped across it, seeming to make fevered love to
the left headlight. He saw the shoe lying drunkenly on its side, its toe barely
touching the edge of one of the pools of oil that lay like a spotted curse upon
the land beyond the abattoir. He saw it there and, of course, he also thought
of blood.

Somehow, years before, permission
had been given to put the slaughterhouse there, long before Marghera had
blossomed, though that is perhaps an inopportune choice of verb, into one of
the leading industrial centres of Italy, before the petroleum refineries and
the chemical plants had spread themselves across the acres of swampy land that
lay on the other side of the
laguna
from Venice, pearl of the Adriatic.
The cement building lay, low and feral, within the enclosure of a high mesh
fence. Had the fence been built in the early days, when sheep and cattle could
still be herded down dusty roads towards the building? Was its original purpose
to keep them from escaping before they were led, pushed, beaten up the ramp
towards their fate? The animals arrived in trucks now, trucks which backed
directly to the high-sided ramps, and so there was no chance that they could
escape. And surely no one would want to come near that building; hence the
fence was hardly necessary to keep them away. Perhaps because of this, the long
gaps in it went unmended, and stray dogs, drawn by the stench of what went on
inside, sometimes came through the fence at night and howled with longing for
what they knew was there.

The fields around the
slaughterhouse stood empty; as if obeying a taboo as deep as blood itself, the
factories stood far off from the low cement building. The buildings maintained
their distance, but their ooze and their runoff and those deadly fluids that
were piped into the ground knew nothing of taboo and seeped each year closer to
the slaughterhouse. Black slime bubbled up around the stems of marsh grass, and
a peacock-bright sheen of oil floated on the surface of the puddles that never
disappeared, however dry the season. Nature had been poisoned here, outside,
yet it was the work that went on inside that filled people with horror.

The shoe, the red shoe, lay on
its side about a hundred metres to the rear of the slaughterhouse, just outside
the fence, just to the left of a large clump of tall seagrass that seemed to
thrive on the poisons that percolated around its roots. At eleven-thirty on a
hot Monday morning in August, a thickset man in a blood-soaked leather apron
flung back the metal door at the rear of the slaughterhouse and emerged into
the pounding sun. From behind him swept waves of heat, stench, and howls. The
sun made it difficult to feel that it was cooler here, but at least the stench
of offal was less foul, and the sounds came from the hum of traffic, a
kilometre away, as the tourists poured into Venice for Ferragosto, not from the
shrieks and squeals that filled the air behind him.

He wiped a bloody hand on his
apron, stooping to find a dry spot down by the hem, then reached into his shirt
pocket and pulled out a package of Nazionale. With a plastic lighter, he lit
the cigarette and pulled at it greedily, glad of the smell and acrid taste of
the cheap tobacco. A deep-throated howl came from the door behind him, pushing
him away from the building, over towards the fence and the shade that was to be
found under the stunted leaves of an acacia that had managed to grow to a height
of four metres.

Standing there, he turned his
back on the building and looked out across the forest of smokestacks and
industrial chimneys that swept off towards Mestre. Flames spurted up from some
of them; grey, greenish clouds spilled out of others. A light breeze, too weak
to be felt on his skin, brought the clouds back towards him. He pulled at his
cigarette and looked down at his feet, always careful, here in the fields,
where he stepped. He looked down and saw the shoe, lying on its side beyond the
fence.

It was made out of some sort of
cloth, that shoe, not out of leather. Silk? Satin? Bettino Cola didn’t know
that sort of thing, but he did know that his wife had a pair made out of the
same sort of stuff, and she had spent more than a hundred thousand lire on
them. He’d have to kill fifty sheep or twenty calves to earn that much money,
yet she’d spend it on a pair of shoes, wear them once, then stuff them in the
back of the closet and never look at them again.

Nothing else in the blasted
landscape deserved his attention, so he studied the shoe, pulling at his
cigarette. He moved to the left and looked at it from another angle. Though it
lay close to a large pool of oil, it appeared to rest on a patch of dry land.
Cola took another step to the left, one that drew him out into the full
violence of the sun, and studied the area around the shoe, looking for its
mate. There, under the clump of grass, he saw an oblong shape that seemed to be
the sole of the other one, it too lying on one side.

He dropped his cigarette and
crushed it into the soft earth with his toe, walked down the fence a few
metres, then bent low and crept through a large hole, careful of the jagged,
rusty barbs of metal that encircled him. Straightening up, he walked back
towards the shoe, now a pair of them and perhaps salvageable because of that.

‘Roba di puttana
,’ he muttered under his breath,
seeing the heel on the first shoe, taller than the pack of cigarettes in his
pocket: only a whore would wear such things. He reached down and picked up the
first shoe, careful to keep from touching the outside. As he had hoped, it was
clean, had not fallen into the oily puddle. He took a few steps to the right,
reached down and wrapped two fingers around the heel of its mate, but it
appeared to be caught on a tuft of grass. He lowered himself to one knee,
careful to see where he knelt, and gave the shoe a sharp tug. It came loose,
but when Bettino Cola saw that what he had pulled it loose from was a human
foot, he leaped back from the bush and dropped the first shoe into the black
puddle from which it had survived the night.

The
police arrived on the scene twenty minutes later, two blue and white sedans
from the Squadra Mobile of Mestre. By then, the field at the back of the
slaughterhouse was filled with men from inside the building, brought out into
the sun by curiosity about this different kind of slaughter. Cola had run
drunkenly back inside as soon as he saw the foot and the leg to which it was
attached and gone into the foreman’s office to tell him there was a dead woman
in the field beyond the fence.

Cola was a good worker, a serious
man, and so the foreman believed him and called the police immediately without
going outside himself to check and see that Cola was telling the truth. But
others had seen Cola come into the building and came to ask what it was, what
had he seen? The foreman snarled at them to get back to work: the refrigerated
trucks were waiting at the loading docks, and they didn’t have time to stand around
all day and gabble about some whore who got her throat cut.

He didn’t mean this literally, of
course, for Cola had told him only about the shoe and the foot, but the fields
between the factories were well-known territory to the men who worked in the factories
- and to the women who worked in those fields. If she’d got herself killed
there, then she was probably one of those painted wrecks who spent the late
afternoon standing at the side of the road that led from the industrial zone
back into Mestre. Quitting time, time to go home, but why not a quick stop at
the side of the road and a short walk back to a blanket spread beside a clump
of grass? It was quick, they expected nothing of you except ten thousand lire,
and they were, more and more often now, blondes come in from Eastern Europe, so
poor that they couldn’t make you use anything, not like the Italian girls on
Via Cappuccina, and since when did a whore tell a man what to do or where to
put it? She probably did that, got pushy, and the man had pushed back. Plenty
more of them and plenty more coming across the border every month.

The police cars pulled up and a
uniformed officer got out of each. They walked towards the front of the
building, but the foreman reached them before they got to the door. Behind him
stood Cola, feeling important to be the centre of all this attention, but still
faintly sick from the sight of that foot.

‘Is it you who called?’ the first
policeman asked. His face was round, glistening with sweat, and he stared at
the foreman from behind dark glasses.

‘Yes,’ the foreman answered. ‘There’s
a dead woman in the field behind the building.’

‘No,’ the foreman answered,
stepping aside and motioning Cola to step forward. ‘He did.’

After a nod from the first one,
the policeman from the second car pulled a blue notebook out of his jacket pocket,
flipped it open, uncapped his pen, and stood with the pen poised over the page.

‘Your name?’ asked the first
policeman, the dark focus of his glance now directed at the butcher.

‘What’s the use of asking his
address?’ interrupted the foreman. ‘There’s a dead woman out there.’

The first officer turned away
from Cola and tilted his head down a little, just enough to allow him to peer
at the foreman over the tops of his sun-glasses. ‘She’s not going anywhere.’
Then, turning back to Cola, he repeated, ‘Address?’

‘How long have you worked here?’
he asked, nodding at the building that stood behind Cola.