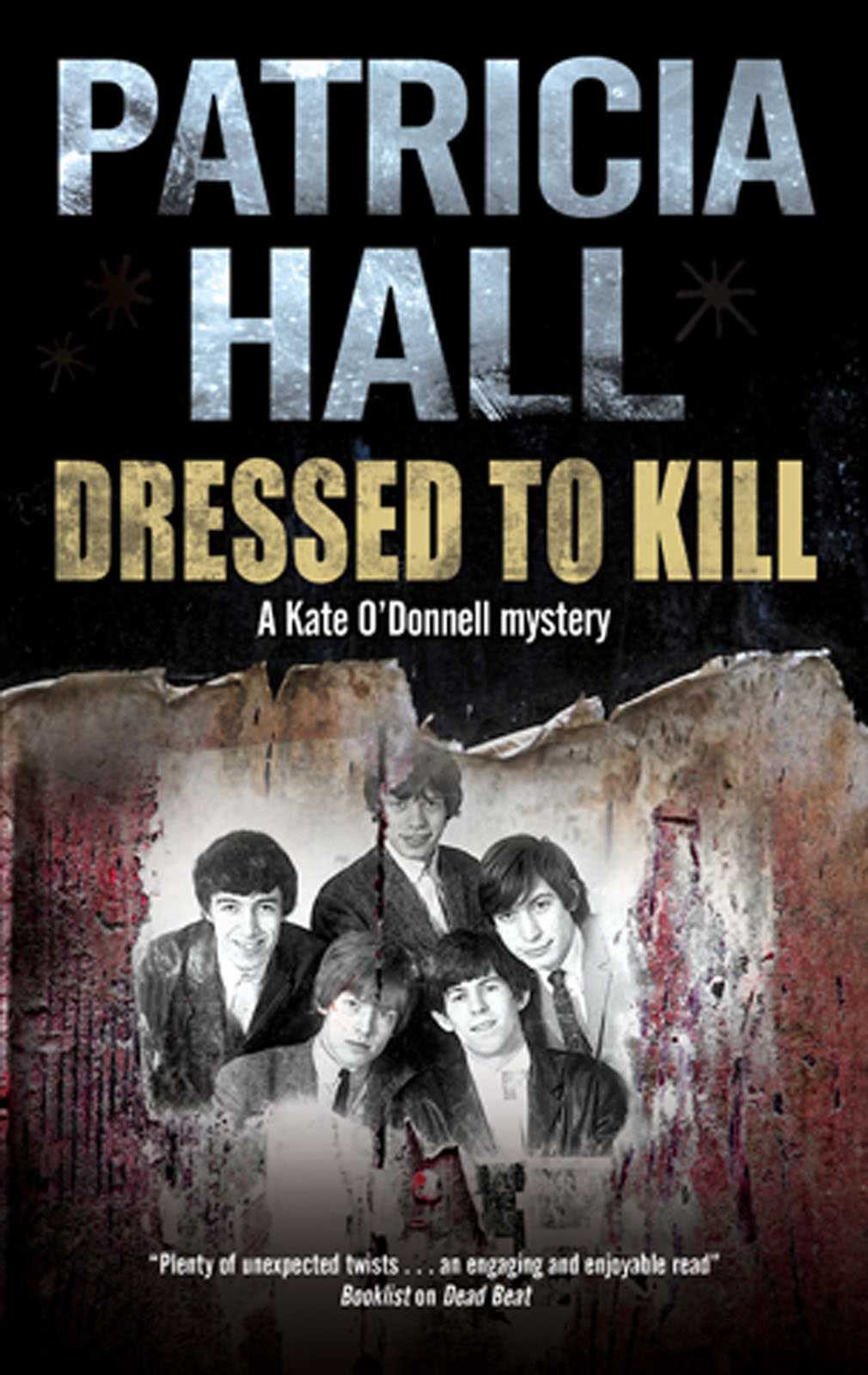 A Selection of Recent Titles by Patricia Hall

A Selection of Recent Titles by Patricia Hall

The Ackroyd and Thackeray Series

SINS OF THE FATHERS

DEATH IN A FAR COUNTRY

The right of Patricia Hall to be identified as the author of this work has been asserted in accordance with the Copyright, Designs & Patents Act 1988.

K
ate O’Donnell stood open-mouthed in a corner of Andrei Lubin’s studio, where work had been brought to a standstill by the arrival of a small woman sporting a very short skirt, very long boots and a very unpredictable temper. She had marched into the room ten minutes earlier, red hair flying, and speaking loudly in a language that Kate assumed was Russian. She had barely paused for breath since and the three young models who had been gyrating in short skirts of their own in front of a virulent puce backdrop had been left standing listlessly like marionettes unable to move unless someone pulled the strings.

Kate glanced at Ricky Smart who, as usual, was standing rather closer to her than she appreciated, and raised an eyebrow. Although she was determined to give him no encouragement, she could not resist a question.

‘Who’s this? Andrei’s wife?’ she whispered.

Smart sneered slightly, his sharp foxy face full of the contempt with which he generally seemed to face the world. ‘Andrei doesn’t go in for wives,’ he said. ‘Tatiana’s his cousin who seems to think she’s gone from refugee to aristo in three generations by marrying some dozy lord with a crumbling pile in the home counties somewhere. But she’s not satisfied with that and is trying to set herself up as a dress designer. Claims she has all these contacts in Paris but still thinks Andrei should help her out by providing her glossy fashion pictures on the cheap.’

‘I’ve never known Andrei do anything for nothing, darling,’ Smart said. ‘I expect your boss has paid a heavy price to have you here looking on. Or maybe Andrei has something else in mind.’ This time he gave her an open leer and ran a clammy hand thoughtfully down her arm. She pulled away sharply just as Andrei Lubin turned his back on his cousin, causing her to curse in English in an accent that Kate thought came straight from the East End, although as a born-and-bred Scouser it was difficult for her to be sure.

‘Get lost, will you, la,’ she said to Smart in her strongest Liverpool brogue, wiping a hand down her arm where Smart had touched her and moving away from him. Evidently their manoeuvring caught the attention of the redhead across the room who marched in their direction as soon as she took on board the camera Kate was carrying. She cast an unappreciative eye over Kate’s outfit, a blue cotton shirt and medium-length grey wool skirt worn with sheepskin-lined boots. Kate flushed slightly. She had lost most of her wardrobe in a fire and was gradually trying to piece it together again. She knew only too well that she couldn’t compete with this tiny woman in the latest styles whose every inch, from her short glossy hair curling round her sharp cheekbones to the tips of her patent boots, seemed groomed to perfection.

‘Who are you?’ Tatiana demanded as she crossed the littered space between them, a minefield of cast-aside clothing, coat hangers, sandwich wrappers and empty beer bottles.

‘I could ask you the same,’ Kate came back sharply. Andrei and Ricky were enough of pains to deal with without someone from outside the studio she was temporarily attached to exhibiting the same peremptory tendencies. The intense young woman’s eyes flashed for a moment before she offered a placatory smile. Kate had not been happy when Ken Fellows suggested this assignment as a preliminary to launching his agency in general, and Kate in particular, into some fashion photography, and she was getting less enthusiastic by the day. She knew little of fashion and cared less. Another temperamental Russian on the scene might be too much, she thought.

‘Tatiana Broughton-Clarke,’ the redhead said. ‘Princess by rights, but no one wants to know about Russian princesses any more, so Lady will do. My husband’s only a Lord but it’s better than plain Mr, I suppose. So who are you? Do you take pictures with that machine?’ She gestured at Kate’s precious Voigtlander camera, which had survived the fire by being hung around her neck as she escaped, and was one of the items that had persuaded a sceptical Ken Fellows to take on his first female photographer; something, Kate thought, he sometimes still regretted.

‘I have been known to take pictures,’ Kate admitted cautiously, having learned by now, during her few exciting months in London, that pictures taken out of turn were sometimes more likely to threaten than reward. ‘Ricky says you’re Andrei’s cousin. I’m supposed to be here to learn how to take fashion shots but I’m more confused than enlightened so far.’

‘You’ve only been here five minutes,’ Smart responded snappily. ‘And you should know better than to smoke in here,’ he threw at Tatiana who had pulled out a packet of Balkan Sobranie and made to offer one to Kate. ‘If there’s one thing Andrei is strict about it’s that. If we singe the client’s merchandise, we’re sunk.’ Kate vividly recalled the acrid smoke after an arson attack on the Ken Fellows Agency where she was officially employed, and shuddered, while memories of the night she and her flatmates had narrowly escaped a conflagration from their top-floor home in Notting Hill she seldom dared recall. It was as close as she had ever come to death and the possibility of repeating the experience in one of the fire traps lurking in Soho’s old buildings horrified her.

‘Come outside, darlink,’ Tatiana said, closing the packet of cigarettes and putting an arm round Kate in a totally unexpected embrace. ‘Let’s have a little chat. I’ll buy you a coffee if you like.’ Kate glanced at Andrei who had turned his attention back to his models and was urging them into ever more athletic poses as he pirouetted around them with his camera. Kate shrugged. Lubin had offered her nothing that could be called serious tuition since she had arrived early at his studio – at his insistence – three days ago, only to wait two hours until he turned up to announce that there would be no shooting that day as his main model was ill.

‘I’d love a coffee,’ Kate said. ‘The stuff Ricky brews up here is horrible. And what the secretary makes is not much better.’ She was conscious of Ricky Smart watching their departure with a crooked grin and wondered what he was thinking.

Tatiana led the way down the flight of dusty stairs leading from the rooftop rooms – which had been converted into studio space – and darkrooms and out of a red painted door into a narrow alleyway running between high brick walls and then into Berwick Street, where the market stalls were attracting a Soho clientele bearing little relationship to the pleasure-seekers who poured into the narrow streets of the area later in the day. These were serious shoppers seeking out fruit and veg and groceries from all over Europe that were not readily available in the suburbs.

‘Coffee we can get here,’ Tatiana said, leading the way into a narrow Italian cafe where a large woman in a white overall presided over the hissing coffee machine. She sat down at a very small table pushed against the side wall of the narrow room, and pulled out her cigarettes again. She offered Kate one of the unusual dark-coloured cigarettes, and, when she declined, lit one herself, blowing an aromatic smoke ring in Kate’s direction.

‘So a coffee then?’ Tatiana asked. ‘This is much better than the rubbish they call coffee in the coffee bars. This is the real thing. Try an espresso. As a Russian – well, part Russian if I’m being honest but a bit of exotic goes down well with the clients – I suppose I should be looking for tea in a samovar, but I have to say I’ve been converted to coffee since I came to London. I was brought up in Paris, you know.’ She ordered and the Italian woman in charge eventually brought them two tiny cups of a dark brew that Kate stared at in astonishment.

‘It’s very strong but very good,’ Tatiana said, her accent switching now to standard English instead of either East End or Russian, though whether either was genuine Kate doubted. Even she knew that the Russian connection for an alleged princess must be way back in time. ‘You may need to put some sugar in it,’ Tatiana advised. Kate took a suspicious sip, stirred a large spoonful of sugar into the cup, tried again and nodded.

‘I see what you mean,’ she said. ‘So I’ve learned about something at last through Andrei’s studio.’

‘You’re supposed to be learning something from my cousin?’ Tatiana asked, not hiding her scepticism. ‘In bed maybe?’

Kate flushed slightly. ‘Nothing like that,’ she said. ‘I work for a picture agency and they want to take on some fashion work. My boss arranged for me to shadow Andrei for a couple of weeks. To be honest I don’t know much about fashion except that skirts are getting shorter and boots longer.’ She glanced at Tatiana’s crossed legs, which revealed what seemed like acres of thigh between boot top and skirt hem and grinned. ‘Maybe it’s you I should be taking lessons from. Andrei’s offered me some time tomorrow evening, after work. I’m not too sure about that.’

‘I might be more reliable than Andrei,’ Tatiana said. ‘And with less of an ulterior motive. He only sees women in two ways: modelling clothes or in bed without any on at all. Don’t say you weren’t warned.’

‘What about as a photographer? Is he any good?’ Kate asked.

‘If you want the honest truth, he’s still stuck in the 1950s. He’s much happier snapping debs in white dresses and society mamas in pastel suits and long gloves than he is learning about the cutting edge of the rag trade. That’s how he’s earned a crust for years. But now he’s realized that David Bailey is flying high with all those skinny girls posing against scruffy street scenes, so he’s trying to catch up. But Andrei doesn’t really know how to get it right. And he won’t listen to me. It’s Ricky who holds that place together.’

The Rings of Tantalus by Edmund Cooper
The Walls of Byzantium by James Heneage
Battle of the Network Zombies by Mark Henry
Lady Folbroke's Delicious Deception by Christine Merrill
Freya by Anthony Quinn
Woodsburner by John Pipkin
Drowning In The Dark: #4 The Veil Series by Pippa DaCosta
Be Mine by Kris Calvert
The One You Fear by Pilkington, Paul
Beyond the Pale: A Thin Veil Novella (The Thin Veil Book 3) by McIsaac, Jodi