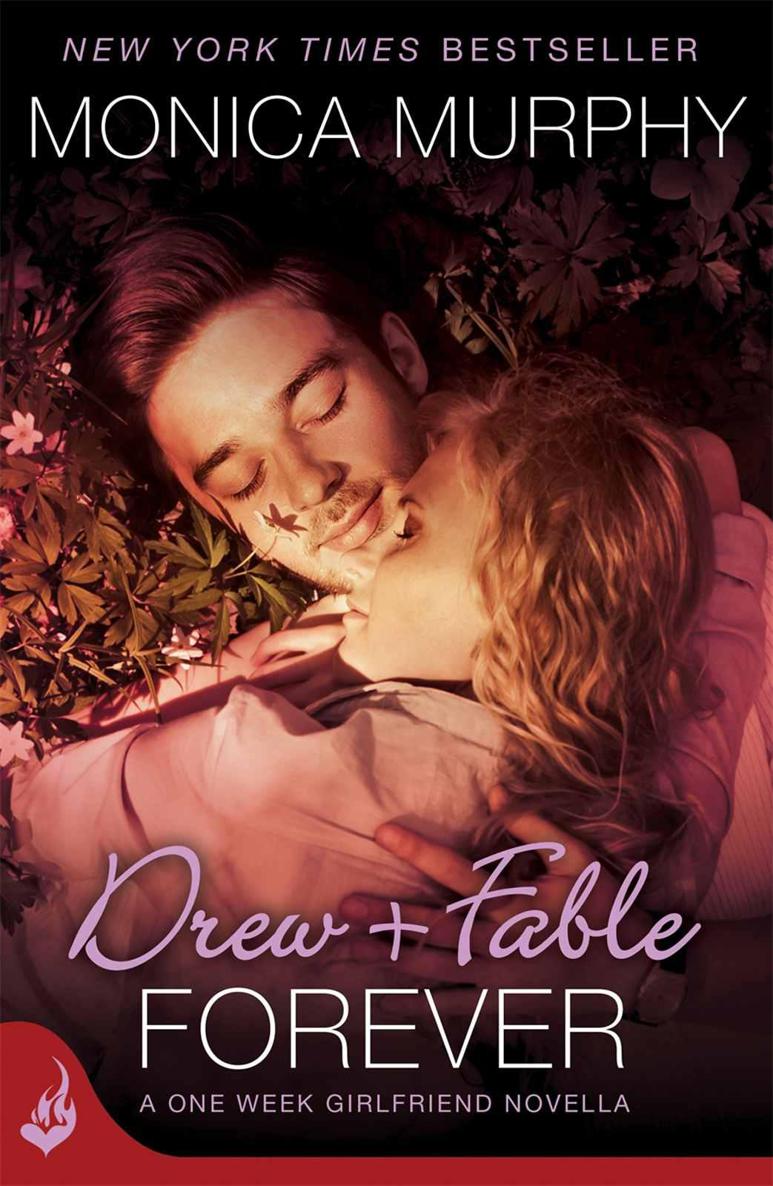 The right of Monica Murphy to be identified as the Author of the Work has been asserted by her in accordance with the Copyright, Designs and Patents Act 1988.

Published by arrangement with Bantam Books,

an imprint of The Random House Publishing Group,

a division of Random House LLC.

First published in this Ebook edition in 2014

An imprint of HEADLINE PUBLISHING GROUP

It all began in
ONE WEEK GIRLFRIEND

Find out more about Headline Eternal

New York Times
and
USA Today
bestselling author Monica Murphy is a native Californian who lives in the foothills below Yosemite. A wife and mother of three, she writes new adult contemporary romance and is the author of the One Week Girlfriend series.

‘Monica Murphy succeeds in making a steamy romance between two characters with amazing chemistry and she turns a work of fiction into something so much more. It is a real, tangible, and beautiful thing’
The Life of Fiction

‘Full of secrets and heartache this is so much more than just a story of love, more like a journey of two lost hearts’ Lisa Jayne,
Goodreads

‘A sweet and sexy read with a dash of angst. It will hook you from page one!’
Under the Covers

‘The author had me hooked within the opening pages . . . All I have to say is pick up the book and be prepared for the roller coaster you are about to get on . . . You will not want to miss this book and this author’
Shh Moms Reading

‘An amazing read! . . . [I] can’t wait to continue the emotional journey of Drew and Fable’
A Bookish Escape

Fantasy.
How I ended up with NFL player Drew Callahan, the guy every woman wants, is beyond my wildest dreams. All I know is that once he chose me as his one and only, I sure wasn’t looking back. I had past wounds and he showed patience and concern – even taking responsibility for my messed-up kid brother. Now, once again, he’s found a way to blow my mind: an exotic wedding and honeymoon miles and miles away from home. What else could a girl ever ask for?

Reality.
Now the honeymoon’s over. Drew’s football schedule takes him on the road constantly, while I need to stay put and look after my brother until he finishes high school – because God knows our sorry excuse for a mother won’t. I know Drew loves me with all his heart, and I’ll always be over the moon about him. This just isn’t how I imagined our life as newlyweds … dealing with the distance, missing him all the time. But we’ve gone through hard times before. We can get through this, too, right? We’re Drew and Fable, together forever. At least I hope so …

Once in awhile, in the middle of an ordinary life, love gives us a fairytale

I glance up from my phone to find Drew standing in front of me, his gaze locked on my face. Exhaustion lines his beautiful blue eyes and his dark hair is in complete disarray, the way it usually is after hours of football practice. There’s a light sheen of sweat on his forehead, and is that … blood at the corner of his mouth?

I’m sitting on the couch, texting Owen and asking where he’s at, but the little jerk is giving me wishy-washy answers. Not that he’s so little anymore, what with the way he towers over me. He’ll be a junior in high school this upcoming school year and he’s spending most of his summer either working, at football practice, or with Wade.

Causing all sorts of trouble, I’m sure.

I didn’t even hear the front door open or close. I’d left it unlocked. We’re staying at a rental in a gated community that’s part of an ultra-swank neighborhood not too far from the stadium, but still. So not good. If Drew realized I hadn’t heard him enter the house, he’d probably be mad. He’s so overprotective of me it’s ridiculous.

In fact, he’s pretty damn sexy right now, glowering at me, waiting for an answer. He must’ve just finished practice—he’s all dirty and sweaty, a combination of adrenaline and frustration pouring off him. It vibrates through me, fueling my constant hunger for him to an even higher level, stealing my breath as I continue staring at him. As he continues to stare at me.

“Why are you bleeding?” I ask, because I gotta know. I hate how he’s brutalized out on the football field sometimes. As the quarterback, he doesn’t take extreme hits like other players. But at this moment he’s got blood on his beautiful face and I don’t like it.

He waves a hand, dismissing my question. Something’s wrong and I wish I knew what. But as usual, he’s not blurting everything out. Not telling me his secrets. His worries. His desires. He likes to hold these things close to his chest. Still.

But I don’t mind prying them out of him. I’m patient. I’m in love.

Soon, I will be Fable Callahan. I’ve earned the freaking privilege to call myself that, too. It’s not easy being with Drew. Yet I wouldn’t trade my life with anyone.

I try a different tactic since he’s not answering my question. “We
are
getting married,” I say slowly, trying to calm my riotous heart. When Drew’s all worked up like this, it … arouses me, more often than not. And I don’t think he’s in the mood for anything like that at the moment. “I even have the engagement ring to prove it.” I raise my trembling hand and hold it out to him.

He shakes his head, frustration making his mouth tight. “I don’t want to wait any longer, Fable. We’re running out of time.”

“Running out of time?” I repeat with a frown. “What are you talking about?”

Drew goes down on his knees, his chest brushing against my legs, his upper body obliterating my vision until all I can see and hear and smell is him. The scent of fresh-cut grass and sunshine clings to him, as well as the familiar scent of his soap and sweat. His nose looks sunburned. There are new lines around his eyes from crinkling them against the sun and at this very moment, I find him so unbearably handsome, even with blood at the corner of his mouth, I know without a doubt I’ll agree to whatever he’s trying to convince me to do. It’s just that easy.

And I’m just that simple.

“Training’s almost finished and preseason is going to start soon. After that, the regular season kicks off and I’ll be busy.
Beyond
busy. Practice, home games, going out of town, all that bullshit for months.
Months,
Fable, when you’re going to end up staying back at home with Owen and making sure he’s going to school, you know? And I’m not against that; we already agreed to the plan.” He pauses, his mouth settling in a hard, firm line for a brief moment before he continues. “So when are we going to fit in getting married between all that?”