Read Drink for the Thirst to Come Online

Drink for the Thirst to Come 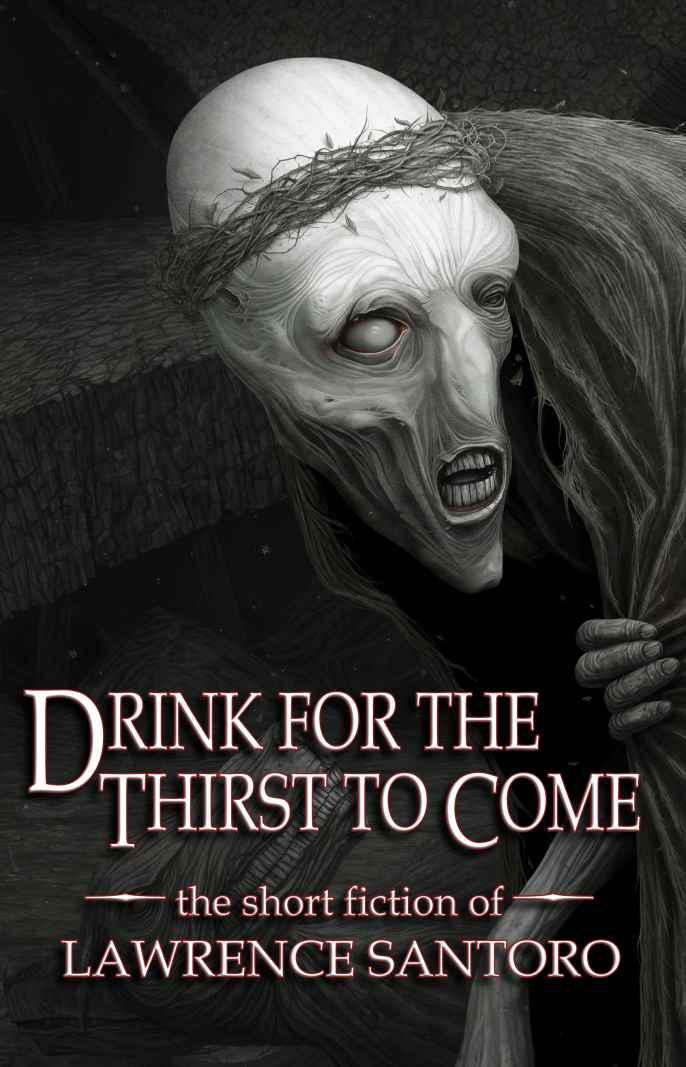 the short fiction of

No part of this e-book may be used or reproduced in any manner whatsoever without written permission, except in the case of brief quotations embodied in critical articles or reviews.

This e-book is a work of fiction. All characters and events portrayed in it are fictitious, except where specific historical events are mentioned or cited in context. Any resemblance to real people or events is coincidental.

“At Angels Sixteen” was first published in A DARK AND DEADLY VALLEY, Silverthought Press.

“A Very Bad Day” was in TALES FROM THE PET SHOP,

“Then, Just a Dream” appeared in STARSHIPSOFA STORIES, Vol. 2.

“So Many Tiny Mouths” was published in Feral Fiction.

“Cordwell’s Book” first appeared in TALES FROM THE RED LION,

IN A DAINTY PLACE

LITTLE GIRL DOWN THE WAY

RAT TIME IN THE HALL OF PAIN

THEN, JUST A DREAM

SO MANY TINY MOUTHS

JEREMY TAKES HIS TEXT FROM THE LIVES OF THE SPIDERS

THE LAST SCOOT AT SKIDOO’S TAP

Five of the fourteen stories in this collection have been printed elsewhere. Two were made to-order for anthologies that never came about. That happens. Three were podcast. Two were submitted and rejected. That happens too. The rest were written then put aside. I do that. The earliest piece in the book is “Rat Time in the Hall of Pain.” It sounds like a title from a writer just setting forth, doesn’t it? It is.

Because I always want to know where things come from, I’ve done short post-mortems on all the pieces in the collection. That can be tricky. I once told a guy who’d sent me a complimentary note that the story he’d liked was based on a real event. He was disappointed. “I thought you made it up,” was the crux of it.

As with almost everything I’ve written, I hope you’ll read these stories aloud. They were written that way, me typing and talking (and getting ‘looks’ from people in cafés, on trains, wherever). So read them to a friend or to yourself. I’d like their voices to be yours.

…summer day and mild, mild weather, a day like no other, a day of sun and warmth, of swimming, friends and beer, a day of just-up corn stolen from the field above the quarry, cobs wrapped in mud, roasted in fire-ash, butter rubbed into the char till it dripped down the fingers.

Later, black clouds rolled across the green-forever. A thunder-anvil filled the world above with miles-high darkness and the smell of how a penny tasted. Late day rain cleared the midsummer heat and brought a chill before the night, a crash-down bang, beauty and wonder, a wonder at the fury of it all, a bombardment, personal, from God in heaven to Chris Harp from out Haul Road, Dolph Station, Texas. As they clamored up the slope, down-rushing mud washed the earth from beneath their feet and hands and they all slid back to the shelf above the water below. Trapped and laughing. At the next down flash and bang, the girls, Lord bless them, Sally Wayne, Jaycee Dogton, Sarah Gonzales, Winnie Border, wriggled, squealing, beneath the blankets. Trapped! So what the hell? Chris dove into the water. Height of the storm, lightning strikes and thunder coming flash/bam and down he dives.

He cleaved deep water, down to where the world was cold and green and the thunder pressed his whole body with terrible immediacy. Little fishies in a mass, shuddered, turned round by regiments.

The guys, Tex Acre, Billy Madeira, Marty Mundt, dove in after. Let them follow, let them not. This was for him, his perfect day, all a game, not for forever. Forever? Hell, forever was inside him, Chris Harp. He carried forever in his every grunt and drip.

Later, with no expectation, Jaycee Dogton was under the blanket with him, in his space and he in her, in her good and sweet, long and quiet so not to be heard, and wholly without preparation. And ah, the smell of sweat and wool and them.

Later, when they hit the diner, the day begins to bleed away. They still roll with joy. When they order, a dozen voices call; as they wait, they rock the eyes of the Sunday folk who turn Methodist stares upon them. Sure they’re the center of attention. And, as this is a dream of perfection,
he
was the center of that center. They bit old Eulie’s ass, they surely did, but even she smiles as she takes their orders, brings the grub. Had to love them, Chris Harp and friends, Lords of the Earth, holders of forever!

By the window, Chris watches night seep from the trees that fence the joint. Texas night shines the rainslick macadam in the lot. Their pickup kicks back orange glitter from sodium lights.

And as always on the road, walking from nowhere, going who knew where, barefoot, white hair flying ahead, shirt, open, flapping, ragged jeans gray with dust, there comes Walkin’ Will, the Old Guy. Grandpa’d told of Will from down in ’34, told of Walkin’ Will who walked the land preaching judgment at the end of times, who shouts out scripture and who takes offered rides on truck or wagon, then somewhere, nowhere, cries, “God says,
walk
here!” and out he leaps to walk wherever, down a road, into the fields… Now here he comes, same one, same as always. Looking back at those left behind he calls, “You! Drink, you! Drink for the thirst to come!”

Chris watches. Beneath the table, Jaycee Dogton takes his hand. Day has bled to memories, beer and thunder, chill water, butter, corn, and her. And with that memory, his final convulsion and the tingle as he flows from himself into Jaycee and into the world, the perfect day becomes one more dirty morning and night is gone with the dream.

And there lay Chris Harp: dirty little man of more than middle years, and those years hidden unto his own-damnself, he waked into a dark and ugly morning, as always. He breathed stench. Everywhere, the reek of mold and ash, of long-drowned fire and rust, of rotted teeth and unwashed pit and crotch, his and hundreds more. One bunk above, the One-eyed Kid from Nowhere still cut wood with the rest of the rink.

For seconds Chris held the dream. When he shoved it away, time it was to rise, shinny down the bunks and be.

Johnny’s Icehouse flop was cold. He shivered into shirt and pants, wrapped the static chain around his waist, thin metal, fine and supple as yarn, let it curl in his pocket with his breathing silks. His jacket was balled beneath the blanket. Leather, fur trimmed, it had come all the way on the Walk. In the pocket, his cell. He stroked dead plastic, touched the numbers of home.

He shook his boots over the edge, wagged his socks and threads.
Let floormen worry about stray critters
, he thought. Slipped into his socks.
The Old Guy’s socks!
“Remember me,” the Old Guy said
(A couple months ago, was that all?),
said before he gave his all to the Vendateria. The socks were warm, a little stiff. Chris wiggled his toes. No holes. Good tubes, tight wove, thick.

New they was.
By some miracle, bag-new. Survivors of The Day, the socks—a miracle of all the days between The Day and the Old Guy’s finding of them—found in plastic, three pairs full.

“Chicago’s gone but my socks survive. Found outta that mess below the collapsed ceiling, mixed they was with skates, pucks, and bust-up junk from Gunzo’s pro shop at Johnnie’s. In the blastshadow the place was. I believe Sears’s’ Tower saved them socks!” The Old Guy pressed his socks into Chris’s hands. “Remember me. My name,” he said.

Chris kept the socks close.
Thank you Sears Roebuck and all things in between. Thank you, Old Guy. Never was no good with names. Sorry.
Socks were pure
worth
. Chris had his own worth, too. He still ate thistle, but was that/close to the Boss table.
That/close.
He’d get there. Can’s bottom, maybe, but something
from
the can at least, a little fat, a bit of…

Fuck you Harp,
Chris told himself,
there’s
this
day to do.
And the next and so it would go until he heard, “Chris Harp. Rise.”
Then
he’d move on up (“…to that de-luxe apartment in the sky-y-y!”
What the hell was that from? What? Cripes, so much gone
). If he didn’t rise to the Boss table, well hell, tumbleweed sprout—called
thistle
in Texas—stayed in him, stayed down anyway, gave him juice to run on. Not everyone was that lucky.

Chris smacked the slats above him. The Kid’s snores gurgled before turning to tears.
What the hell? The Kid? What’s his name? Worth plain nothing and that was fact.
Chris wondered why the Boss…

No.
Shut down that Goddamn plink.
He did not wonder
why-the-Boss
anything.

Down the pole went Chris, by the Mex, past Fireman Bill and the Drooler. He hit floor where tucked last night’s TV Johnny, snoozing still. A celebrity and still on the floors.
Lost: the series premiere
this Johnny’d been last night. Maybe Chris’d be TV John tonight. He was a tolerable
Simpsons
but no one—
not a one!—
was
My Name Is Earl
like Christian Harp. Now that was one ace shitload of worth.

Gray light shafted through the roof thirty feet above. It lay busted on snoring lumps that quivered and farted across the floor of the rink. Time to move. There’d be shadow today. The Long Season
was
ending, Boss had said. So there it was. Sky
is
clearing, five-year Winter verging on Spring.

Then earth returns, bears fruit and…

…and enough of that!

In the lobby, more light knifed through the curving wall and ceiling. For a second he watched the beams crawl. They licked floor, folded over trophy cases, caught the once-glassed pictures of men on ice. One hell of a spot must have been the Icehouse lobby back in the day before The Day.

Fuckit
. He skittered, crunching glass and beams of dirty light that cut through pulver-dust. It was a spooked out place—though none spoke of spooks or living dead. “
Ain’t no living dead,”
Boss had said. Still, sometimes, late, dragging back from a worth-hunt—be it folly or for the Boss—Chris felt shivers in the neckhair. Just wall crackles or creeping skitters among shards and busted brick, sure-sure. But when shadows flickered in tallow flame, yeah, he scooted, ahead of thoughts of Walkin’ Will barefooting the busted earth.
Them nights
, Chris shinnied to his bunk, wriggled down beneath his blanket like a girl and let the snoring ease him…

The tin sheet over the doorway thundered as he wiggled into morning. Light cut through the stumps of buildings, Wetward. And there! His shadow, a sun-shade falling through the dust. It dragged westward from his feet, toward the Outskirts and long-gone ’burbs. He felt like dancing his shadow. He did not. And there was the gong, the always and forever
bong-bong, bong-bong,
distant, tolling out of the Wet. One day he’d like to…

Teetoncey and Ben O'Neal by Theodore Taylor
Children of Evolution (The Gateway Series Book 2) by Minton, Toby
Harp's Song by Shine, Cassie
The Life of the World to Come by Kage Baker
Beastly Desires by Winter, Nikki
Dark, Dangerous, Delicious - Control by Cassandre Dayne
The Bride Test by Hoang, Helen
Dreaming of the Wolf by Terry Spear
Hunted (The Tinder Chronicles) by Land, Alexa
The Sultan's Virgin Bride: A story of lust, loyalty and passionate resentment. by Clare Connelly