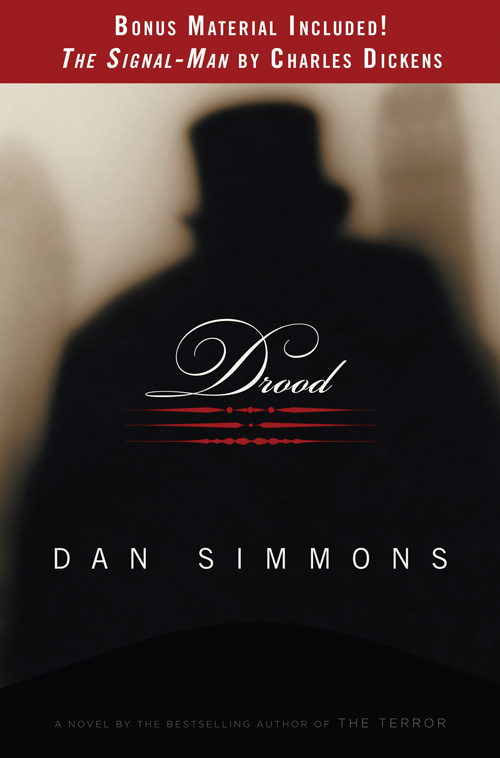 Little, Brown and Company is a division of Hachette Book Group, Inc.

The Little, Brown name and logo are trademarks of Hachette Book Group, Inc.

also by
D
AN
S
IMMONS

The Fall of Hyperion

Children of the Night

The Rise of Endymion

Some demon whispered — ‘Wilkie! Have a mission.’ ”

M
y name is Wilkie Collins, and my guess, since I plan to delay the publication of this document for at least a century and a quarter beyond the date of my demise, is that you do not recognise my name. Some say that I am a gambling man and those that say so are correct, so my wager with you, Dear Reader, would be that you have neither read nor heard of any of my books or plays. Perhaps you British or American peoples a hundred and twenty-five or so years in my future do not speak English at all. Perhaps you dress like Hottentots, live in gas-lighted caves, travel around in balloons, and communicate by telegraphed thoughts unhindered by any spoken or written language.

Even so, I would wager my current fortune, such as it is, and all future royalties from my plays and novels, such as they may be, on the fact that you
do
remember the name and books and plays and invented characters of my friend and former collaborator, a certain Charles Dickens.

So this true story shall be about my friend (or at least about the man who was once my friend) Charles Dickens and about the Staplehurst accident that took away his peace of mind, his health, and, some might whisper, his sanity. This true story will be about Charles Dickens’s final five years and about his growing obsession during that time with a man—if man he was—named Drood, as well as with murder, death, corpses, crypts, mesmerism, opium, ghosts, and the streets and alleys of that black-biled lower bowel of London that the writer always called “my Babylon” or “the Great Oven.” In this manuscript (which, as I have explained—for legal reasons as well as for reasons of honour—I intend to seal away from all eyes for more than one hundred years after his death and my own), I shall answer the question which perhaps no one else alive in our time knew to ask—“Did the famous and loveable and honourable Charles Dickens plot to murder an innocent person and dissolve away his flesh in a pit of caustic lime and secretly inter what was left of him, mere bones and a skull, in the crypt of an ancient cathedral that was an important part of Dickens’s own childhood? And did Dickens then scheme to scatter the poor victim’s spectacles, rings, stickpins, shirt studs, and pocket watch in the River Thames? And if so, or even if Dickens only
dreamed
he did these things, what part did a very real phantom named Drood have in the onset of such madness?”

T
HE DATE OF
D
ICKENS’S DISASTER
was 9 June, 1865. The locomotive carrying his success, peace of mind, sanity, manuscript, and mistress was—quite literally—heading for a breach in the rails and a terrible fall.

I do not know if you Dear Readers living so many years hence still record or remember history (perhaps you have renounced Herodotus and Thucydides and dwell perpetually in the Year Zero), but if any sense of history remains in your time, you must know well the important events of the year we called Anno Domini 1865. Some events, such as the end of the fraternal conflagration in the United States, were considered of some drama and considerable interest by many in England, although not by Charles Dickens. Despite his great interest in America—having travelled there already and written books about it, not altogether flattering books one must add, and after having struggled so fiercely to receive some recompense for the piracy of his works in that copyright-flaunting chaos of former colonies—Dickens had little interest in a war between some distant North and more-distant South. But in 1865, the year of his Staplehurst disaster, Charles Dickens had reason to be very satisfied indeed with his own personal history.

He was the most popular novelist in England, perhaps in the world. Many people in England and America considered my friend to be—outside of Shakespeare and perhaps Chaucer and Keats—the greatest writer who had ever lived.

Of course, I knew this to be nonsense, but popularity, as they say (or as I have said), breeds more popularity. I had seen Charles Dickens stuck in a rural, doorless privy with his trousers down around his ankles, bleating like a lost sheep for some paper to wipe his arse, and you will have to forgive me if that image remains more true to me than “the greatest writer who ever lived.”

But on this June day in 1865, Dickens had many reasons to be smug.

Seven years earlier, the writer had separated from his wife, Catherine, who obviously had offended him in their twenty-two years of marriage by uncomplainingly bearing him ten children and suffering several miscarriages, all the while generally putting up with his every complaint and catering to his every whim. This endeared his wife to him to the point that in 1857, during a walking trip we were taking in the countryside during which we had sampled several bottles of local wine, Dickens chose to describe his beloved Catherine to me as “Very dear to me, Wilkie, very dear. But, on the whole, more bovine than entrancing, more ponderous than feminine… an alchemist’s dull brew of vague-mindedness, constant incompetence, shuffling sluggishness, and self-indulgent idleness, a thick gruel stirred only by the paddle of her frequent self-pity.”

I doubt if my friend remembered telling me this, but I have not forgotten.

Actually, it was a complaint that did Catherine in, domestically speaking. It seems (actually, it does not “seem” at all—I was there when he purchased the blasted thing) that Dickens had bought the actress Ellen Ternan an expensive bracelet after our production of
The Frozen Deep,
and the idiot jeweller had delivered the thing to the Dickenses’ home in London, Tavistock House, not to Miss Ternan’s flat. As a result of this mis-delivery, Catherine had given forth several weeks’ worth of bovine mewlings, refusing to believe that it was merely her husband’s token offering of innocent esteem to the actress who had done such a wonderful (actually, I would say barely competent) job as the hero’s beloved, Clara Burnham, in our… no,
my
… play about unrequited love in the Arctic.

It is true, as Dickens continued to explain to his deeply hurt wife in 1858, that the author had the habit of showering generous gifts on his fellow players and participants in his various amateur theatricals. After
The Frozen Deep
he had already distributed bracelets and pendants, a watch, and one set of three shirt studs in blue enamel to others in the production.

But, then, he wasn’t in love with these others. And he
was
in love with young Ellen Ternan. I knew that. Catherine Dickens knew that. No one can be sure if Charles Dickens knew that. The man was such a convincing fictionalist, not to mention one of the most self-righteous fellows ever to have trod the Earth, that I doubt if he ever confronted and acknowledged his own deeper motivations, except when they were as pure as springwater.

In this case, it was Dickens who flew into a rage, shouting and roaring at the soon-cowed Catherine—I apologise for any inadvertent bovine connotation there—that his wife’s accusations were a slur on the pure and luminously perfect person of Ellen Ternan. Dickens’s emotional, romantic, and, dare I say it,
erotic
fantasies always revolved around sanctified, chivalric devotion to some hypothetical young and innocent goddess whose purity was eternally beyond reproach. But Dickens may have forgotten that the hapless and now domestically doomed Catherine had watched
Uncle John,
the farce that we had put on (it was the tradition in our century, you see, always to present a farce along with a serious drama) after
The Frozen Deep.
In
Uncle John,
Dickens (age forty-six) played the elderly gentleman and Ellen Ternan (eighteen) played his ward. Naturally, Uncle John falls madly in love with the girl less than half his age. Catherine must have also known that while I had written the bulk of the drama,
The Frozen Deep,
about the search for the lost Franklin Expedition, it was her husband who had written and cast the romantic farce,
after he had met Ellen Ternan.

Not only does Uncle John fall in love with the young girl he should be protecting, but he showers her with, and I quote from the play’s stage directions, “wonderful presents—a pearl necklace, diamond ear-rings.”

So it is little wonder that when the expensive bracelet, meant for Ellen, showed up at Tavistock House, Catherine, between pregnancies, roused herself from her vague-minded shuffling sluggishness and bellowed like a milk cow with a Welsh dairyman’s prod between her withers.

Dickens responded as any guilty husband would. But only if that husband happened to be the most popular writer in all of England and the English-speaking world and perhaps the greatest writer who ever lived.

First, he insisted that Catherine make a social call on Ellen Ternan and Ellen’s mother, showing everyone that there could be no hint of suspicion or jealousy on his wife’s part. In essence, Dickens was demanding that his wife publicly apologise to his mistress—or at least to the woman he would soon choose to
be
his mistress when he worked up the courage to make the arrangements. Weeping, miserable, Catherine did as she was bid. She humiliated herself by making a social call on Ellen and Mrs Ternan.

It was not enough to assuage Dickens’s fury. He cast the mother of his ten children out.

He sent Charley, his eldest son, to live with Catherine. He kept the rest of the children to live with him at Tavistock House and eventually at Gad’s Hill Place. (It was always my observation that Dickens enjoyed his children until they began to think and act for themselves in any way… in other words, when they ceased behaving like Little Nell or Paul Dombey or one of his other fictional constructs… and then he quickly grew very bored with them.)

Kissed by Fire by Shéa MacLeod
Imperial Assassin by Mark Robson
Bodyguards by Kallysten
Heart of the Woolf (Woolf Series) by Andersen, Kai
CHASED (A Standalone Billionaire Romance Novel) by Kristina Weaver
The Chukchi Bible by Yuri Rytkheu
Demise of the Living by Iain McKinnon
Death Will Help You Leave Him by Zelvin, Elizabeth
The Lawman's Legacy (Love Inspired Suspense) by McCoy, Shirlee
French Connection Vol. 3 by M. S. Parker