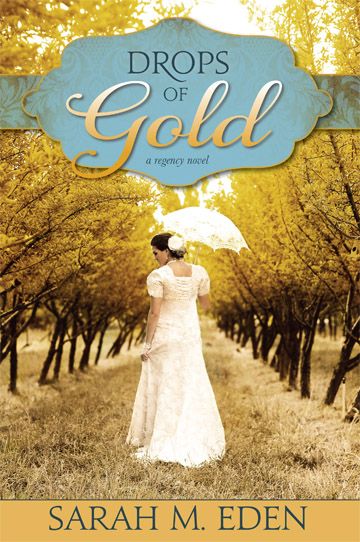 This is a work of fiction. The characters, names, incidents, places, and dialogue are either products of the author’s imagination, and are not to be construed as real, or are used fictitiously.

for every dance recital, every set built, every

badminton game—for believing in me

I absolutely love delving deep into research, immersing myself in the study of a time period and a way of life. Occasionally I come across a source of information so invaluable I can only sit back in grateful awe. In formulating this story, I discovered two such works and feel the need to recognize them here:

The astoundingly great information and commentary in these two books added an authenticity to this story I could not have claimed otherwise and have already sparked ideas for many stories yet to come.

“But which way is Farland Meadows?” Marion shouted into the biting wind. She hadn’t anticipated being left on an empty public road.

The coachman pointed directly behind her before cracking his whip over the heads of his team, sending the mismatched beasts into a frenzied run. The mail coach rattled and swayed at the abnormal speed.

“Typical,” she muttered to no one in particular. Being abandoned in a part of the country she’d never set foot in fit perfectly with the unpredictable nature of her life lately.

Two days earlier she’d been hired sight-unseen, based on nothing more than a single recommendation, to fill a position for which she knew she was completely unqualified. She swallowed back a lump of guilt. She not only hadn’t earned that recommendation, but she had also written it herself under an entirely fictitious name—though, she thought with pride, she’d done remarkably well disguising her handwriting. If her current occupation proved unsuccessful, she could seek her fortune as a forger.

Forging was probably wrong, she reflected, especially the references she’d created for herself. That lie was not nearly as white as she would have liked. Lamentable.
But starvation is also lamentable
, she reminded herself. A clear conscience was a poor substitute for a full belly.

Watching the hasty retreat of the mail coach and its two passengers, Marion could do little but review the journey and determine what to do next. Since she’d changed mail coaches at Southwell, Marion’s fellow passengers had been a middle-aged spinster of the working class and the woman’s nearly blind father of exceedingly advanced years. They’d struck up an easy conversation, something Marion had feared for months would never happen again. She’d resigned herself to a myriad of depressing fates. If her imagination hadn’t had a tendency toward the absurd, she might very well have submitted to an interminable bout of blue-devils.

“’Ave you family in Collingham, child?” the woman in the mail coach had asked.

Marion had reminded herself that age could be a relative thing. At nineteen, she was hardly a child. But compared to the octogenarian seated beside the woman, Marion was an infant.

“No,” Marion had replied, keeping her eyes on her folded hands and, with some difficulty, her voice low and submissive. “I’ve found a position.”

“Don’t sound like a servant,” the older man had observed gruffly.

Ah, furuncle!
She’d need to practice more. She had repeated her words silently, trying out a few different inflections.

“Don’t
look
much like one either,” the woman had added. “Though I s’pose ye can’t ’elp yer looks.”

A few miles of blessed silence had followed, in which Marion had tried to devise ways to make herself look more like a servant, although she wasn’t sure what particular features screamed “servant” and why she seemed so entirely without them. Perhaps red hair was frowned upon for a member of a household staff. A generous amount of walnut rinse might darken it. Marion had pictured her reflection in her mind. A
very
generous amount would be needed—even when caked in dirt, carrots were orange.

Maybe she should frown. Were frowns more servant-like than smiles? Perhaps a pout would help. She’d have to think on it and see if she could find a mirror to practice in front of.

“An upper servant?” the male traveler had then asked, his overly loud voice making Marion wonder if his hearing was failing as well.

“Most likely.” His daughter had shown not a hint of confusion, though Marion hadn’t the slightest idea what the two were discussing. “She’s too young to be a governess.”

“I
am
a governess,” she’d responded with a smile after realizing they were talking about her.

The woman had seemed shocked for a minute then had slowly nodded her perfectly round head in approval. “There are several large estates not far from Collingham. Lampton Park. Finnley Grange. Sarvol House. Carter Manor . . .”

Marion had smiled. None of these apparently grand estates even sounded close to the paradise for which she was destined.

It sounded straight from a fairy tale. She’d amassed a wide collection of fanciful mental images of what the picturesque estate must look like. It would be lined with stately trees, she was certain. Rolling hills. Meadows, of course. It would be positively overrun with meadows filled with flowers and bright grass. Perhaps a stream trickled through one end of it. Farland Meadows would be perfect. It simply had to be.

“And where are you ’eaded to?” her curious companion had requested.

With a broad smile, Marion had said the name that had been at the forefront of her mind the past two days. “Farland Meadows.”

Even before she’d finished the idyllic words, her companions’ faces had fallen.

“You’ve been ’ired up to the Meadows?” the woman had asked, her voice a tense whisper.

“’Ave you nowhere else to go, child?”

Marion had shaken her head.

The woman had sighed almost mournfully. Neither she nor her father had spoken again.

Nightfall had been imminent, and if Marion hadn’t missed her mark, so was a snowstorm, when the coach had come to an abrupt and unexpected halt. The door had opened, and the coachman had motioned Marion to step out.

“The Meadows ain’t no place for ye, child,” the woman had whispered fervently as Marion had climbed down.

Wind whipped furiously around her skirts and had threatened to pluck her well-worn bonnet from her head. The coachman had handed Marion her handleless valise.

“Good luck to ye,” he’d muttered and climbed back onto the coach.

“This can’t be Collingham,” she’d called out, looking around at the uninhabited copses of trees and empty, open fields around her. A low wall separated the road from the land surrounding it, but there was no other indication of civilization nearby. Collingham, she understood, was a small but relatively busy town.

“Less of a walk for ye,” the coachman had answered, settling himself onto the driver’s bench.

When she had called out for direction to her new place of employment, the strength of the wind had made his reply impossible to hear. But he’d pointed.

And now the coach was but a little silhouette against the increasingly dark horizon.

“Typical,” she muttered again, shaking her head. If she weren’t so cold, the situation might have been amusing. She could easily have been the heroine in some ridiculous gothic novel. All she lacked was a handsome rescuer to come riding up on his noble horse to sweep her off the ground.

Marion looked up and down the road. Empty. “Typical.” She laughed at herself.

What am I waiting for
? Marion demanded of herself. She spun around to face the direction the coachman had pointed and began walking, holding her small valise to her to block the wind, which bit and gnawed at her face.

The stinging cold rid her of any weariness her long days of travel had created. Thoughts of Farland Meadows warmed her. Such a peaceful name. It would be a wonderful place, she felt certain. Beautiful grounds. Warm, loving family with an angelic child.

The Meadows ain’t no place for ye.
The woman’s words wouldn’t leave Marion’s mind. She was wrong, Marion insisted. Absolutely wrong. The Meadows would be perfect. How could a position that was so obviously a direct answer to her most fervent prayers be anything but heaven-sent?

With her customary smile determinedly on her face once more, Marion began walking again. Now that she thought back on it, the driver had been uneasy when she’d told him her destination. Three people in one day concerned for her at the very mention of Farland Meadows? Curious, to be sure.

Marion shook her head and dismissed the incidents as an odd coincidence. In a matter of minutes, she reached a set of open iron gates leading into a thick stand of trees cut through by a carriage path.
Farland Meadows?
she wondered. The gatehouse not far distant was visible despite the setting sun, but no lights glimmered inside. Four knocks went unheeded.

Cold seeped through her skirts and threadbare coat. Marion glanced down the carriage path that cut through the bare-branched trees then glanced back up at the road. There was no way of knowing if this was, indeed, Farland Meadows.

“I could at least ask for directions.” Marion was an old hand at talking to herself, something that had always made her mother laugh and her father shake his head.

With a shrug, she followed the carriage path. The grounds of the still-unnamed estate felt undeniably peaceful. Marion rounded a corner on the path and, mouth hanging open, stopped in her tracks. The red light of sunset reflected off the facade of a perfectly wonderful home, well-kept and obviously cared for, with just enough wear to give it character. She couldn’t have been more pleased with the house if she’d designed it herself.

Marion smiled. This had to be Farland Meadows. It absolutely
had
to be
.
She took a deep breath of pine-scented air, the cold nibbling at her features. She hugged her handleless valise to her and smiled up at the home straight out of one of her dreams.

Too happy to merely walk, Marion ran and even twirled once or twice as she circled around to the back of the house. The life of a governess wouldn’t have been her first choice, but taking a look at the picturesque setting, Marion knew she couldn’t have hoped for a better outcome.

She stopped in front of the servants’ entrance, bonnet hanging limply around her neck. Marion had no desire to arrive for her new position with her flame-red hair flying about in complete disarray. She tapped her bonnet back in place and tucked as many of her loose locks inside it as she could manage without a mirror or a single hairpin. That would simply have to do. Marion knocked hard at the door and waited.

After several minutes, the door opened. A girl of no more than fourteen stood just beyond and gave her a questioning glance.

“Is this Farland Meadows?” Marion never had been able to dampen her natural enthusiasm. She didn’t imagine she sounded much like a servant.

Marion felt like hugging the girl. She managed to restrain herself. “I am Mary Wood.” Marion had already decided Mary was a more appropriate name for one in her situation. “The new governess.”

“Governess? We didn’t hire a governess.”

She closed the door, leaving Marion in stunned silence on the doorstep.

Layton Jonquil stood in the midst of his six brothers. They’d already honored an hour’s worth of requests from their extremely enthusiastic mother. Layton didn’t feel particularly in the mood for caroling—and hadn’t for years, in all honesty. But this was Mater. Layton would do anything for his mother.