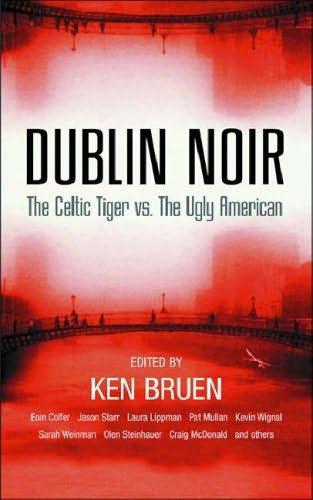 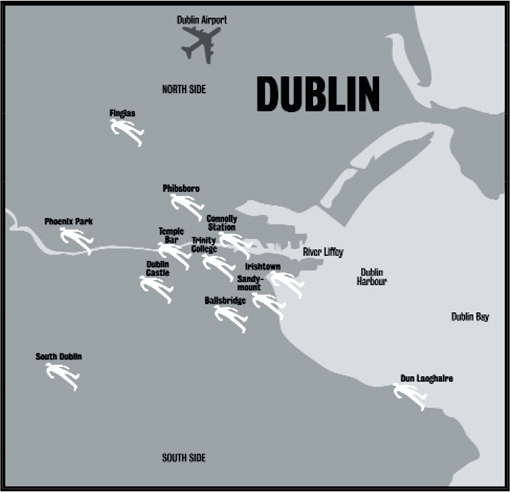 B
rooklyn Noir
was a huge success, set a bunch of authors to write about one place, simple and highly effective.

At first, it was straightforward—Dublin authors to write on their city … Then we turned the concept on its head, as you do in noir. The Irish are fascinated by how we appear to the world, so let’s have a look, we thought, at how this city appears from the outside. In addition to a couple of us locals, let’s take a cross section of the very best of today’s crime writers from America, as well as Britain, Europe, and Canada—the successful ones, the new blood, and those between. We knew we’d get a lot of Yeats and Ulysses, but what else … ?

The challenge we posed to the authors we invited to join this collection was simple: Show us
your
Dublin, and show it noir.

Tourists booking holidays in Ireland inevitably do Dublin first and seem to always end up in Temple Bar, our very own Times Square—replete with the squalor, the drugs, the homeless, and the wandering psychos. Two years ago, Pat Boran, the legendary director of the Dublin Arts Festival, invited me to do a reading in Temple Bar. During my gig, a woman up and died. It added to my already noir rep and has certainly given me pause about returning there. Temple Bar, naturally, features in many of the stories, and the authors certainly capture the noir element. The Tourist Board, not fond of me in the best of times, has responded with a bounty on my head. I take that, I think, as flattery.

Ireland’s alleged surging economy—the “Celtic Tiger”— has thrust Dublin onto the world stage, though here the city’s not exactly seen through rose-tinted glasses. Black Irish humor shines in all the stories, as if instinctively the writers knew: You want it Dublin, then you want it funny as sin, dark as the smile on Joyce’s face when he found he was on the index of banned books. To be Irish is to dance on the Titanic; laughter is indeed the best revenge, it’s our way of evening the score.

You won’t find many leprechauns or bodhrans here—and not one
top o’ the mornin’.
“The Quiet Man” has gone dark, and with a vengeance. If nothing else, this collection will kill stone-dead the Irish caricature of shite talk and blarney. In the days of Brit occupation, to be outside Dublin was to be outside the pale. This collection is so far from that parameter, you can’t even see the boundary.

Like Irish logic at its most convoluted, this volume offers up a story that moves from Budapest to Dublin written by a Texan. In another, Ray Banks, from Manchester, England, presents a vision of Dublin as fierce as any Celt’s. One of the collection’s tastiest moments comes when Peter Spiegelman’s femme fatale tells his protagonist, “Yer pretty feckin’ Irish for a New York Jew, Jimmy—you’ll fit right in in Dublin.” The one guarantee from every story in this book is a skewed perspective on this most volatile of locales.

We set John Rickards, an impossibly young writer, loose in Dublin—a British mindset carried in an American style—to see what would happen. James O. Born, a Miami homicide detective, gives us a
radical
(to put it mildly) take on the Irish tourist industry. Laura Lippman and Sarah Weinman masterfully bust up our sketchy designs on an all-guy lineup.

And how could we do this without the culchie take? … So we have the Galway view on Dublin, always going to be contentious. If nothing else, we knew it would make Nora Barnacle smile.

The dictum,
Only connect,
was brought home to me in Las Vegas. James Crumley, renowned mystery writer, asked, “Wouldn’t it be something to connect all these different countries, have them united in crime?”

Dublin, locus of so many literary legends, seemed a fine place to connect some dots. Enjoy.

Part One
The Inside Job
Taking on Pj
By Eoin Colfer

“He sent PJ,” said Little Mike, pulling his head in the apartment window.

Those were the three words.

Those five weren’t great either.

“Shit,” swore Christy. “One bloody can of Fanta. One can.”

Little Mike shrugged. After the high wind, his black hair looked drawn on with a crayon. “It’s the principle with Warren. Steal a little, steal a lot. He don’t care, Christy.”

Christy chewed on a nail. “I was waitin’ and I was thirsty and the fridge was right there. Hummin’. So one bloody can.”

Little Mike tried to flatten his hair. “He does that. It’s like a test. Leave you waiting in his shop, surround you with product, see if you can keep your paws off. Go against your nature. Did you ever hear the story about the fox and the scorpion?”

Christy threw whatever was handy at Little Mike. “Fuck off with your scorpion. The whole world knows that story. Every time the shit hits the fan, some fucking wise man trots out the fox and the bloody scorpion. I am up to here with those two, honest to Jaysus.”

Mike rubbed his crown, where the Fanta can had clipped him. “I was only sayin’,” he said, sulky now.

Christy folded immediately. He had enough enemies, and one of them was on his way up the eight flights.

“Sorry, brother,” he said, knuckling the spot where the can struck. “I’ve a bad case of the freaks. This fucker is an animal. Did you hear what he did to Father Hillary?”

Christy shuddered. “Jesus Christ. You know how big those things are? Some of ’em have studs too.”

“Hillary was a nice old eejit. I mean, what did he do?”

“Wouldn’t split the Sunday take, I heard. Sixty-forty, Warren says. Hillary says go to hell, so PJ did the job with the candle.” Christy was pacing now. “A priest. A bloody priest. What will he do to me?”

“That, and do you like the car’s new bulletproof windows? I mean, they look the very fucking same. What’s to like about them?”

Little Mike cleared his throat. “To get back to PJ. Please God, he’ll stay clear of your mickey. Some of these enforcers are a bit quare, you know. They do stuff to you. I’ve heard stories about PJ. Worse than the Paschal candle.”

Christy sank into the sofa, wiping his mouth over and over. “Maybe if I explain …”

“I’ll tell him. I was there to turn over the bag money. I was just waiting for Mister Warren, and I forgot where I was. Thought I was in a normal shop. Just robbed the can like I generally would. So here’s the euro, no harm done.”

Little Mike hadn’t the strength to laugh. “I hope you lie better than you tell the truth. Jesus, that was shite. He’ll ride the both of us with the leg of the table if you tell him that. I think we better just go.”

Christy had always been the brains of the duo. “Go where? We’re on the top bloody floor. The lift’s knackered. So unless there’s a helio-bloody-copter on the roof, the only way is down.”

Out in the hall, the banisters clanged and vibrated. PJ was battering a tattoo. Jungle drums. Every door in the block would be locked before the rattle faded.

“We’re shagged,” breathed Christy, the mascara running down his cheeks.

“That makeup looks fuckin’ stupid now,” said Little Mike. “You look like a bloody panda or something.”

Christy found a nugget of pride somewhere. “This is cool, right. Yer man from Manic Street Preachers wears this, and yer man from Busted.”

“Mebbe. But they don’t go streaking it by bawling all over their faces, do they?”

Christy’s panda eyes squinted. “Well, PJ is coming up the stairs with God knows what under his coat. Any rock star you care to mention would shit himself.”

Christy could actually hear footsteps on the stairs. Slow and deliberate. PJ was giving him time to jump out the window.
Focus,
he told himself.
Think about what’s actually happening.

“Shut up, Little Mike. I need to think about what’s actu- ally happening, not Bon Scott.”

“That was always your trouble,” said Mike with a few sage nods. “Drifting off. Remember when Miss Doyle asked you Colombia’s main export and you said forty-eight? Sure, that was the day before.”

A soft idea began firming up in Christy’s head. “What if we took PJ on?”

“Coffee,” said Mike. “Any eejit knows that. But it wasn’t that you were stupid, you just never nev …” He stuttered to a halt. “Who? Take what on? Do what?”

Christy jumped to his feet, grabbing his friend by the shoulders, trying to keep the idea going. “Look, PJ’s coming in that door any second. He’s going to break a few bones, and probably do a few deviant things in the riding department. You’re not walking out either. You know what he’s like.”

A tear appeared in the corner of Mike’s eye. “You and yer fuckin’ Fanta.”

Little Mike realized that his friend was actually serious. “Two of us? Father Hillary had God Almighty helping out, and look where it got him.”

“I know. But we’re a team. For years, since primary. Batman and Robin.”

Christy was shocked. “He did not, did he? Jesus, I didn’t hear about that.”

“Yeah. It was a big shock. The Joker kilt him.”

“That fuckin’ Joker. I didn’t see that coming.”

Christy shook Batman out of his head, trying to focus.

Little Mike had two legitimate questions. “Distract him with what? And hit him with bloody what?”

Christy looked around. There wasn’t much left in the flat other than the bare essentials. A sofa, fridge, widescreen TV, and PlayStation 2.

He ripped the foam on the sofa arm and yanked out a bit of a plank.

“This for the hitting.”

“A nail. Are you de-looo-sional, Christy? Two letters for ye.” Little Mike cupped his hands around his mouth. “Pee Jay. We’re fucked. We take the breaks and hope there’s no freaky stuff.”

Christy wouldn’t hear it. “No. He comes in this door here, right?”

“So he comes in, and you distract him. Then I fucking whack him straight between the eyes, with the nail. And we’re off on the ferry to England. Or down into the deep country. Waterford or something. I heard they got jungles down there, brother. Local natives that will get up on ye for fifty cent. Like fuckin’ Mexico.”

Little Mike was sucked in by his friend’s enthusiasm. “And just how am I supposed to distract him?”

“You know how,” said Christy meaningfully, nodding in a respectful and non-homosexual way at Little Mike’s bollock area.

“The big lad has to come out,” said Christy. “It’s the only extraordinary thing in the flat. It’s all we have.”

Little Mike’s dick was legendary in the flats, in the entire north side. This was mainly due to the fact that Mike himself had spray-painted every hoarding in Dublin with the legend,
Little Mike has thirteen inches.
Followed by his mobile number. Morning, noon, and night he was on that phone.

“PJ is bad enough without taunting him. If I have the lad out, it’s just rubbing his nose in it. He’ll have to cut the big fella off.”

Christy had it all figured out. “No. He comes in, expecting two fellas to either have a go, or be shitting themselves in the corner. What he doesn’t expect is Mister Thirteen Inches eyeballing him. So for one second, he’s off his stride, then I whack him in the face.”