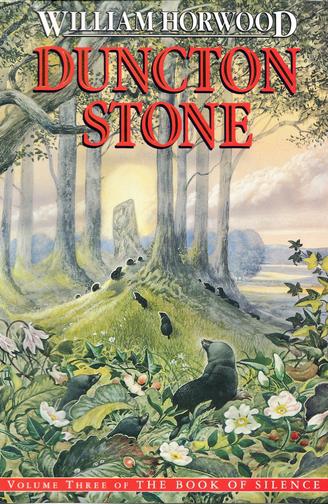 Under the cruel leadership of Quail, the sectarian Newborns have taken control of many key systems of Moledom, including Duncton Wood.

But the loyal followers of the Stone have not given up. In Duncton Wood itself the library aide Pumpkin has bravely led some followers into the mysterious Ancient System; and in fabled Uffington, Fieldfare inspires resistance to the Newborns. Even in dread Wildenhope, headquarters of the Newborn leadership, the deposed Elder Senior Brother Thripp strives to undermine Quail’s position and right the wrongs he originally inspired.

Meanwhile, followers await news of Privet, female scholar and scribemole, and of her quest for the lost Book of Silence. Any hope of their final survival and victory may depend on her. But now she has disappeared, and no mole can tell what sacrifices she must make to find the lost Book, and whether she will have the strength and faith to bring it back to its rightful place beneath the Duncton Stone.

THE BOOK OF SILENCE

THE BOOK OF SILENCE

be identified as the author of this work

Printed and Bound in Great Britain by

All rights reserved. No part of this publication may be

reproduced, stored in a retrieval system, or transmitted,

in any form or by any means, electronic, mechanical,

photocopying, recording or otherwise, without the prior

permission of the publishers.

Moles who appeared in
Duncton Rising,

Volume Two of
The Book of Silence

WARNING
:
If you have not read
Duncton Tales
or
Duncton Rising
you are advised against reading the character descriptions below as some of the plot of the previous books is given away.

A
RUM
Loyal helper to Thripp.

B
ARRE
Newborn Senior Brother Inquisitor sent by Quail and Thripp to help cleanse Duncton Wood’s Library. Killed in the Chamber of Roots.

B
ODEN
One of Thripp’s most loyal helpers.

B
RIMMEL
Female and smallest of Privet’s pups by her Brother Confessor. Died young.

C
HATER
A journeymole and mate of Fieldfare. Killed at Caer Caradoc.

C
LUNIAC
Son of Elynor and a doughty follower who helps Pumpkin.

C
OBBETT
Librarian at Beechenhill who sets Privet on her quest for the Book of Silence.

D
RUBBINS
Elder of Duncton Wood and close friend of Stour. Killed by the Brother Inquisitors.

F
ETTER
Senior Brother Inquisitor sent with Barre and Law to cleanse the library of Duncton Wood. Intelligent and cruel.

F
IELDFARE
Middle-aged Duncton female who befriends Privet. Mate to Chater from whom she is separated on her journey to Seven Barrows where she helps lead a group of rebels.

G
REAR
Aggressive last leader of the Ratcher moles. Son of Red Ratcher and therefore one of Rooster’s brothers. Rooster kills him at Crowden.

H
AMBLE
Crowden warrior and puphood friend of Privet and later colleague of Rooster on his campaign against Newborns to the east of moledom.

H
OBSLEY
Elderly follower who escapes into a coppice named after him north of Caer Caradoc. Privet and several others stay with him.

L
OOSESTRIFE
One of Privet’s female pups by her Brother Confessor.

M
ADOC
Newborn female (known as Sister Hope) from Bowdler who becomes follower when she is befriended by Privet.

M
APLE
Duncton warrior who accompanies Privet and Whillan to Caer Caradoc. Set to lead the followers against the Newborns.