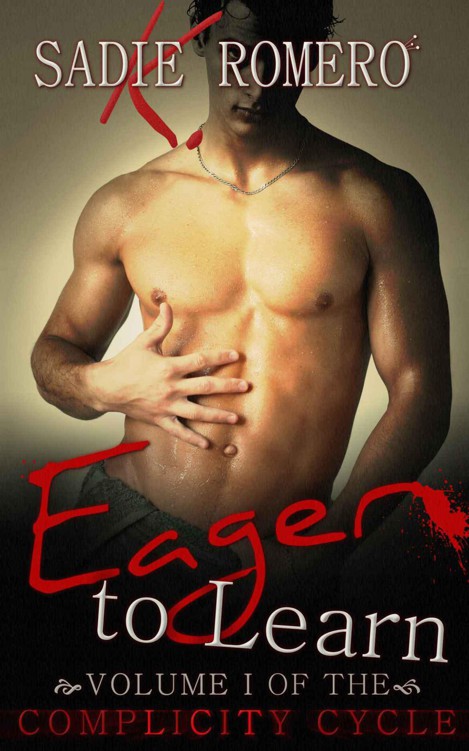 Volume One
of the
Complicity Cycle

All r
ights reserved. No part of this document may be reproduced in any form without express, written consent from the author.

A product of
S.K.R.
Publishing

Who may have been perfect

~An Invocation of Ogoun

I
was late for chemistry the first day of my sophomore year because I forgot the room number. I’ve always been forgetful.

I
could remember that the professor’s name was Dr. Gia-something-or-the-other, and I knew it was on the first floor, but the actual number eluded me completely.

As I wandered Choppin Hall
like an idiot, other students filtered into their classes and the hallway became lonely corridor through which I alone continued to stalk, frustrated and cursing at myself, my sneakers squeaking on the polished tile.

I pulled out my phone—
which was a couple of updates behind and running like a digital slug—and tapped the web browser. I logged into the university website and waited for the screen to change. The university’s servers, of course, were located thousands of miles off-campus. In a glacier. Made of molasses. So I stood there, getting increasingly more-late and wishing I had just written my schedule down.

I knew myself better than this.
Why would I leave anything to memory?

Finally, my course listings materialized, and I realized I
wasn’t even on the right floor. The room number was 336.

Two flights of stairs later, I found myself wandering the third floor of Choppin, which looked almost identical to the first floor.
Now I knew the number, but the room didn’t exist.

337 was a computer lab, and a goth kid with
green-tipped hair leaned away from his computer and looked out at me. “What’s that?” he said.

“
I’m supposed to be in room 336, but apparently it doesn’t exist,” I said, laughing a little at myself.

I stared at him for a moment, processing this madness.
“What?” I said. “My professor is—” I glanced down at my phone, “Dr. Giacomo.”

“
Yeah, sorry,” said Goth Kid. “I was just messing with ya.” He pointed past me at the opposite side of the hall—a doorway I had ignored because it said “Choppin Main Lecture 3” on a brassy plate. Printed just beneath that, invisible to my panicked and quickly-scanning eyes, was the number 336.

“
Thanks,” I said over my shoulder. I rushed to the door and pushed it open.

I tripped as I entered and caught the door for support, slamming it hard against the interior wall.

Three hundred heads turned to face me, and three hundred pairs of eyes bored straight through me.

I froze, the force of all that sudden attention slamming all thought from my brain.

The room was huge and full of students and silent.

The prof
essor stood behind a podium. The array of giant screens behind him all displayed a Word document of the course syllabus. Prominent among the bullet points for expected behavior was the bold topic, “Better
Never
than Late—I’d rather you not show up at all than disrupt my class.”

The professor waited, staring with the rest of the students as I leaned against the door. He was a distinguished older man with steel-gray hair and hard, pale eyes. Even at this distance, I could see he was muscled and tall, exhibiting none of the hunched softness that usually hallmarked aging men.

“
Well,” he said, his voice like something made of oak, larger than life through his jacket-pinned microphone, “are you enjoying the attention?”

“
I’d like to continue, if that’s all right with you,” said Dr. Giacomo.

The class ruffled with subdued laughter, and my face burned.

I let the door close and slunk into an empty seat near the back.

“
As I was saying,” said Dr. Giacomo, “it’s paramount in a class of this size and difficulty to stay focused and ordered. If you oversleep or feel like being disruptive some morning, I’d rather you not come at all. I honestly don’t care if you miss class. I’m not your daddy, and I’m not your mommy. Don’t send me emails about why you didn’t come, because frankly I didn’t notice and I don’t care. If you show up, show up quietly and on time.” His eyes lingered on me pointedly.

I slumped deeper in my chair as a few more glances flickered my way
.

“
I will say that this is a very rigorous course. While you’re free to play hooky, doing so will be to your detriment. I don’t waste time in here, so you will need to attend to pass the class. However, you’re all adults, and you all have agency over your own affairs.”

He continued going over the syllabus in detail, laying out the expectations of the coursework and policies regarding cheating and the weighted balance of grades and so on.
When he finished, he assigned pages to read in our textbooks, gave us a problem set to work, and dismissed class early.

Everyone crowded toward the back, but I pushed through them, moving
to the front.

Dr. Giacomo was talking to his teaching assistant, a scarecrow grad student with oversized glasses.

I waited for them to finish speaking before I approached. I pulled a printed form out of my binder.

“
Dr. Giacomo?” I said, hoping I was pronouncing it right.

“
Yes?” he said, turning the cool burn of those hard blue eyes on me.

I was standing on the classroom floor, and
he stood on a raised platform and leaned against his podium. He towered over me.

“
If you were paying attention,” Giacomo interrupted, “you would understand that I don’t care. Although, in the future, you should take care with first impressions. You’re setting a bad precedent.”

He waved me off and turned back to his teaching assistant.

He looked back at me with a raised eyebrow.

“I didn’t just come to apologize.” I held out the printed form, and he took it. “I have a condition that may affect my performance in this class,” I said. “I have to ask you to sign this, acknowledging that accommodations can be made for my disability, if necessary.” It was a canned little speech that I’d gotten pretty good at delivering. I felt my confidence lift just a bit off the ground as I rolled through the familiar words.

“‘
Caitlyn Seager,’” Giacomo read. He regarded me with some hint of new interest.

“
Everyone calls me Lynn,” I said.

Giacomo folded the paper and slipped it into his leather shoulder bag.
“I’m afraid I have a meeting and don’t have time to give to this matter attention just now. Could you come see me during my office hours this afternoon to discuss any arrangements?”

“
Good,” he said. “My office location is in the syllabus. In case you forget that too.”

I left Choppin Hall and stepped out into the soup of late-summer Louisiana heat.
Though I sometimes found this heat oppressive, it felt good that day because it lined up with the embarrassed smolder in my face and chest. I equalized with the weather, taking it in and becoming a part of it.

I walked across campus,
and a light gleam of sweat glazed me immediately.

The trees and grass of the quad were almost painfully green, their brightness thrown in sharp contrast against the first-week-of-college purple worn by practically all the incoming freshmen, proud to be new LSU students.

The campus had two hearts. The first was the quad, which everyone passed through on their way to wherever they were going. It was an open place to bump into everyone you knew and make on-the-spot lunch plans. On a given day, you pretty much just had to show up and you’d meet someone to eat with.

The second heart was the Union, which housed the LSU bookstore and a slew of restaurants.
Campus organizations set up booths and sold knickknacks or posters or asked for donations or recruited new members in a kind of shady free-zone between the Union and the parade grounds. Sometimes, fire-and-brimstone street preachers showed up to decry the evils of college life and tell us we were all going to hell.

I lingered in the quad, hoping to bump into someone I could eat with.
I set my backpack against a stone bench and rested under the leafy shade of an overarching live oak.

In the middle of one of the triangular patches of grass, white-masked theater students acted out some avant-garde performance piece.
They stood like statues for a moment before snapping silently to a new position at the indication of a silver-masked puppet-master, who walked smoothly through them. He wore a black sweater that must have been intolerably hot.

I noted that there were
so
many reasons not to be a theater major.

I saw Jeffery step out of Stubbs
, and I waved at him.

“
Jeffery,” I called, cupping my hands to my mouth.

He grinned and started toward me.

Jeffery was the late-blooming all-star. He had absolutely none of the athleticism that made for high school golden boys, but he had charm and ambition, and unlike all the football players who peaked senior year of high school, Jeffery was just getting started. And he knew it, the cocky bastard.

He was a double-major in Business and English. Business because he planned on being filthy rich.
English because he loved reading poetry. He played the piano with (exclaimed his music professor) a large and heavy soul. He had a stand-up comedy routine that he performed on Open-Mic Night at Northgate Tavern, and a comedy club manager from New Orleans had told him he had the gift. He was the gem of the debate team. He was on the Dean’s list, was in the honors program, looked like a movie star, and rock climbed on the weekends.

People who didn’t know him
hated
him. Nobody likes the idea of somebody who’s good at
everything
.

We
’d been dating for the last two years.

Jeffery
came over and sat down next to me, his eyes narrowed and teeth white in a sun grin. He kissed me. A big, long, everybody-look-at-us kiss.

“
What you up to, kid?” he asked, tucking a strand of hair behind my left ear in a way that had become a kind of signature.

“
Are you DTF?” I asked, which in our in-lingo could mean one of two things. Here I meant: “Down to Food?”

Jeffery shrugged.
“I could eat. Let’s stay away from the Union, though.”

“
News crew or something over there.”

“
Oh,” I said, suddenly cold in spite of the heat.

“
Right,” he said. “They’re interviewing people and stuff. I don’t think they’d, like, recognize you or anything, but they might. So… Secret Subway?”

Behind the library and tucked under Foster Hall lay a Subway sandwich shop so unadvertised and out-of-the-way that most people didn
’t even know it existed. We walked there holding hands because we were just sickeningly adorable like that.

“
You planning on joining any clubs this year,” Jeffery asked between bites of his chicken teriyaki on wheat.

“
Come on,” he said. “You’ve got to do something extra-curricular.”

“
Yeah, but you’re missing out on a lot of cool stuff. I mean, your world can boil down to just a few people pretty quickly if you’re only doing the academic stuff.”

“
The academic stuff is what I need to focus on,” I said. I was eating a broccoli and cheese soup which I regretted ordering. It was too hot for soup, and this subway’s seating was outdoor-only in a little concrete pit that baked like a pizza oven. The little umbrellas over the tables weren’t doing much.