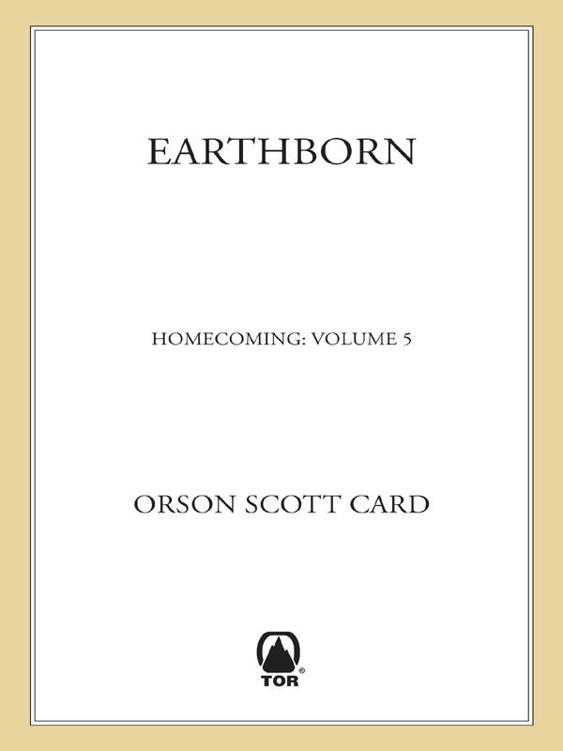 “Card’s protagonists confront their moral quandaries with a brutal and compassionate honesty in this stand-alone conclusion to a galaxy-spanning series.”

“As this novel opens, the only one of the original voyagers still alive is aboard an orbiting starship. On Earth, numerous factions have arisen and become divided because of disagreements about forms of government and the rights of the ‘skypeople’ and ‘diggers.’ All, however, are still seeking the Keeper of Earth. This complex situation, abetted by Card’s superior characterization, offers more than enough conflict and questing to keep the yarn moving. The grand saga of human evolution is a demanding category of SF and fantasy, but Card has met its demands.”

This is a work of fiction. All the characters and events portrayed in this book are fictitious, and any resemblance to real people or incidents is purely coincidental.

To Jerry and Gail Argetsinger:
Before the pageant, before the costumes,
Before we were cast in the roles we play today,
You taught me how to create a lasting love.

CHARACTERS
Note on the Conventions of Naming

Among the Nafari humans, it is the custom for persons of distinction to add titles of honor to their names, as honorifics. Formally, the honorific is put at the beginning of the name, so that on state occasions the king of Darakemba is Ak-Moti; but most commonly the honorific is added at the end: thus, Motiak. Some honorifics are altered in order to combine with the name, and some names to combine with the honorific. Thus when Jamim was heir, he was Ha-Jamim or Jamimha, the normal pattern; but as king he was Ka-Jamim or Jamimka (compared with Nuak/Ak-Nu and Motiak/Ak-Moti); and as former king he is spoken of as Ba-Jamim or Jamimba (compared with Nuab/Ab-Nu and Motiab/Ab-Moti).

The honorifics for men that show up in this book are: Ak/Ka, which means “reigning king”; Ha/Akh, “heir”; Ab/Ba, “former king”; Ush, “mighty warrior”; Dis, “beloved son”; Og/Go, “high priest”;
Ro/Or, “wise teacher”; Di/Id, “traitor.” The honorifics for women that show up in this book are: Dwa, “mother of the heir” (whether she is living or dead); Gu/Ug, “most-honored wife of king”; Ya, “great compassionate woman.”

In addition, the syllable
da
is used as an all-purpose term of endearment, and is inserted at the end of a usually shortened name, but before any added honorifics. Thus Chebeya, in private, calls her husband “Kmadaro,” which is (A)kma + da (endearment) + ro (honorific meaning “great teacher”), and Akmaro calls her “Bedaya,” which is (Che)be + da (endearment) + ya (honorific meaning “great compassionate woman”).

It is also worth pointing out that there are several terms for the different intelligent species. The sky people, earth people, and middle people can also be called angels, diggers, and humans, respectively. The former three terms suggest formality, dignity, and equivalency among the species. However, the latter three terms are merely informal, not necessarily pejorative, and members of all three species readily use both the formal and informal terms for themselves.

Dudagu, or Gu-Duda—Motiak’s present wife, mother of his youngest son

Motiab, or Ab-Moti—Jamimba’s father, who led the
Nafari out of the land of Nafai to unite them with the people of Darakemba, forming the core of the empire

Pabulog, or Og-Pabul—former high priest of King Nuak, and now a particularly vicious leader among the Elemaki, with an army at his disposal

Zenifab, or Ab-Zeni—the founding king of the Zenifi, for whom the tribe is named; their fundamental belief is that humans should not live with angels or diggers, and they tried to re-establish a pure-human colony in their ancestral homeland of Nafai after the Nafari merged with the Darakembi

Nuak, or Ak-Nu; also Nuab, or Ab-Nu—Zenifab’s son
and recent king of the Zenifi; in speaking of the time when he reigned, “Nuak” is used; in referring to later times, he is called “Nuab”; there is always some confusion for a while in changing over from one honorific to another