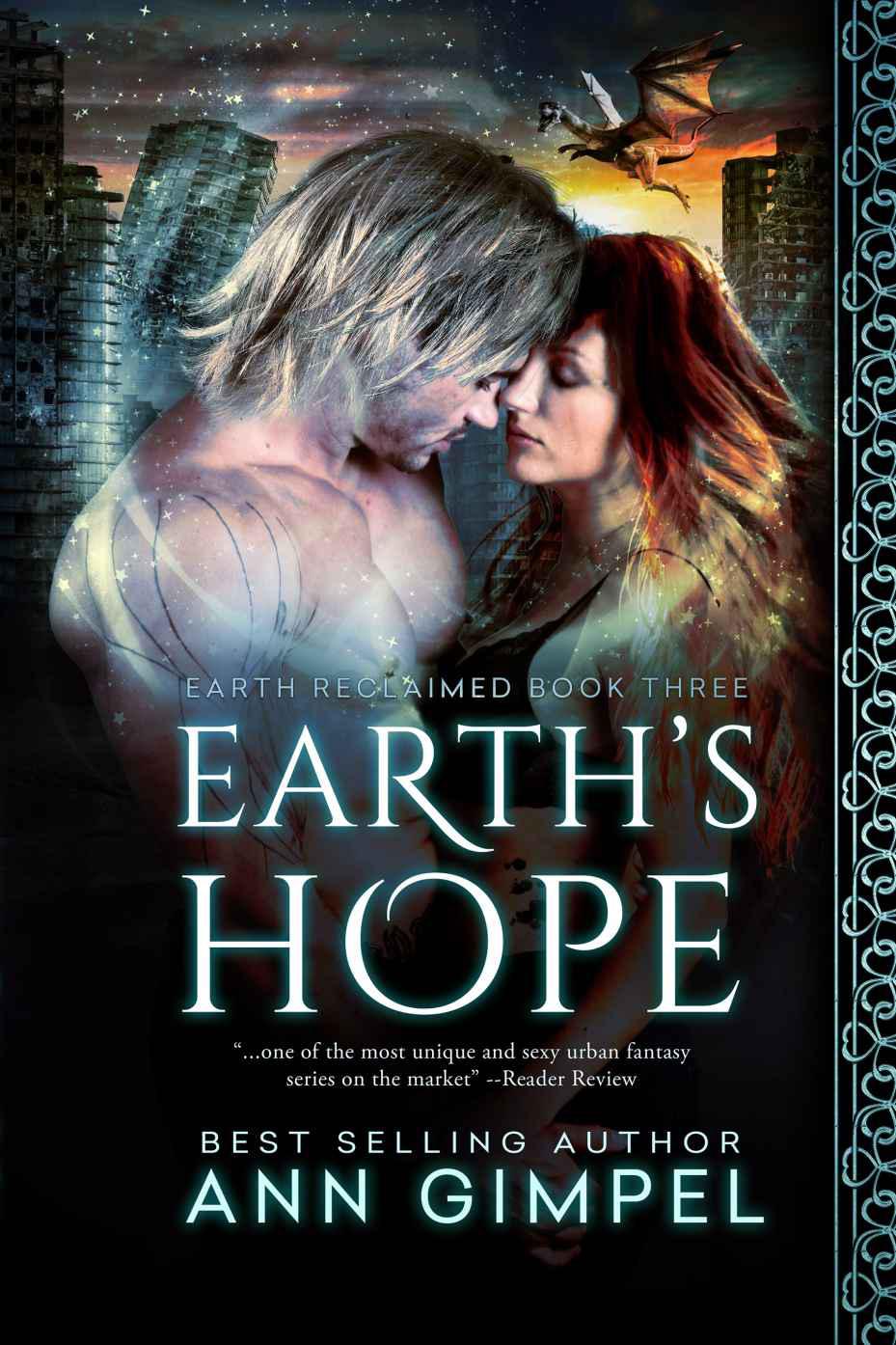 Names, characters, and incidents depicted in this book are products of the author’s imagination, or are used fictitiously. Any resemblance to actual events, locales, organizations, or people living or dead, is entirely coincidental and beyond the intent of the author.

No part of this book may be reproduced or shared by any electronic or mechanical means, including but not limited to printing, file sharing, e-mail, or web posting without written permission from the author.

Power so old, deep, and chilling it hurts to think about it will overrun Earth if nothing changes. Targeted, furious, and fighting back, Aislinn runs wide open, gathering allies and putting her life on the line.

Aislinn Lenear has traveled a long road since the dark gods invaded Earth better than three years ago. After seeing her father slaughtered in front of her, and her mother sink into madness, Aislinn built strong walls around her heart. First her bond wolf, and then Fionn MacCumhaill, changed all that, but she and Fionn are far from home free.

Four of the six dark gods are still sowing destruction, and they’ve joined forces with Lemurians, a desperate lot, running just ahead of the tide of their own mortality. In a bold move, they try to coopt a group of young dragons, and very nearly succeed. Dewi, the Celtic dragon god, and Nidhogg, the Norse dragon god, banish their brood to the dragons’ home world, but they refuse to stay put.

In a fast-paced, tension-riddled closure to this dystopian, urban fantasy series, Earth's Hope sweeps from Ireland to the Greek Islands to the Pacific Northwest to borderworlds where the dark gods live. Fionn’s and Aislinn’s relationship is strained to the breaking point as they struggle to work together without tearing one another to bits. Fionn is used to being obeyed without question, but Aislinn won’t dance to his tune. If they can find their way, there may be hope for a ravaged Earth.

Reviewer Praise for Earlier Books in the Series:

Have you ever picked up a book by a new to you author and been transported to another world? That is what happens when you start reading Earth's Requiem by Ann Gimpel. You are transported into her world of our earth, a post apocalyptic earth, but ours none the less. Holli Greer

I was hooked from the first chapter. This story is interwoven with mythology, history, magic, love, friendship and survival. Each layer is interlocked so seamlessly and you can't tell where one starts or ends. The characters are colorful, the friendships deep and the story grabs hold of you and does not let you go. Niki Driscoll

This story was amazing. Gimpel really knows her world building. We are thrust into this new world and you feel like you are there. It was very easy to get lost in this book. Offbeat Vagabond

The world of magic and mythology comes to life, the prophecies so fascinating it’s easy to lose onself in Ann’s stories and forget everything in the real world. Definitely a hit right out of the park. InD’Tale Magazine

I fell in love with these characters and their world in the first book Earth's Requiem and more so in Earth's Blood!!! The characters and world is so detailed that you feel as though you are there and for me that means it is an amazing book! Cupcakes and Books

Top notch read!! Do yourself a favor a pick this book up! Fury8 Bibliophile

Book 2 is just as fantastic as the first! Please note to read Earth's Requiem (book 1) first as it would answer many things and keep you better connected to the wonderful world that has been created. Just as the first book this one grabs you from the start and pulls you into a wonderfully created world with a tension filled plot, beautiful descriptions and easy to love characters. Book Bliss Blog

This book, and the two preceding it are dedicated to my patient husband. It's not easy being married to an author, but he puts up with my endless hours at the computer and reads my first drafts--at least most of the time.

Dewi’s blood-red wings cut through cold, blustery air. Day edged into evening, and the western horizon would soon be awash in the muted tones of a winter sunset. The dragon traveled without thought, following Nidhogg’s dark bulk as he flew in front of her. For a time, she’d kept pace with her mate, the Norse dragon god, but the sight of their dead child cradled in his forearms smote her, and she’d dropped back to where the dark gods’ treachery didn’t smack her dead in the heart. Perrikus and Tokhots had kidnapped two of her younglings. One was safe, but the other had bitten Tokhots and succumbed to his poisoned blood.

Fire burst from Nidhogg’s mouth, followed by steam. His grief was shifting to anger. Too bad hers couldn’t do the same. Dewi rotated her head atop her sinuous stalk of a neck. Today she felt every single one of her better than two thousand-year life span, and her mistakes haunted her. Life had been simpler before mankind developed a fondness for machinery and electronics. Back then, everyone still believed in magic and treated her with the reverence that was her due as the Celtic dragon god, but the world had changed. Humans no longer jumped when Celtic gods—like her—snapped their fingers.

Smoke burbled past her double rows of teeth. Not that the electronic age was a problem anymore. The dark gods had joined forces with Lemurians, alien beings from the lost continent of Mu, and stripped the planet of all human life they couldn’t turn to their advantage. They’d done a damned thorough job of it too.

Dewi was falling behind, so she flew faster. Not fast enough to pull in front of Nidhogg, though. It was pathetic, not dragonlike at all, but Dewi clung to sanity by a thread. If she didn’t watch it, despair would get the better of her, and she’d set the countryside below on fire.

“What are you doing, woman?” Nidhogg trumpeted.

Dewi’s eyes snapped open and she looked around. Lost in her thoughts, she’d veered off course to the east. “Sorry,” she called and flew faster until she drew alongside the coal black dragon who’d been her mate for millennia. He turned whirling green eyes awash in pain her way. Dewi shook her head and said firmly, “This is my fault. I should’ve—”

“Stop.” He narrowed his eyes. “We can’t go back. You think I don’t feel guilty for what happened to our child?” More fire streamed from his nostrils. “I was so spellbound to have you by my side again, I deluded myself into believing nothing wicked would befall us. How could it? Hadn’t we paid enough?” Bitterness underscored his words.

“Hush, love.” Shaken out of her own sorrow by Nidhogg’s distress, she sent healing magic across the air between them.

“We will find time for talk,” he said, “but now I need your help crossing the barrier into our borderworld.”

“Of course.” Dewi wove magic around them, strengthening the air currents beneath their wings. She’d been overjoyed and astonished when Nidhogg breathed life into dragon eggs she’d turned into a shrine. Between delight at being reunited with Nidhogg after his centuries of imprisonment, and the sudden reality of eight baby dragons, she hadn’t fully settled into motherhood. The small dragons were so endearing—and unexpected—she’d coddled them, denying them nothing.

In hindsight, she should have been more vigilant. While her back was turned, the dark gods had filched two of her precious brood from beneath her nose, with help from the Lemurians. Thank the goddess Fionn and the MacLochlainn had stepped in and saved one of her purloined children. They’d tried to save them both, but had been too late. Aislinn—the MacLochlainn—might be headstrong, but she was courageous and loyal. Dewi hadn’t thanked her enough, something she’d remedy just as soon as they returned to Fionn’s manor house in Inishowen.

Dewi peered through the gathering gloom of the dying day. She couldn’t see across the barrier quite yet, but she knew what lay beyond it. Dragons had been forged in a fiery world. Long ago, most dragons raised their young there, but she and Nidhogg—and the eight younglings he’d resurrected from their egg casings—were the last of their kind. New eggs percolated in her belly, but it would be weeks before they’d be ready to incubate, and a year beyond that before they hatched.

“I said I was sorry.” Steam curled from her mouth. “This isn’t easy. I want to be back in Inishowen with our other younglings.”

“You think I don’t?” More smoke followed his words. “Would you have us pile one sin atop another? We must honor our lost child by bringing her home.”

Dewi didn’t answer. Each of them was so mired in grief it was a miracle they were able to be civil. She pushed more power into her spell. They were close to the magical barricade separating Earth from the dragons’ homeland. The air darkened and developed an iridescent glow. Power tinged with an electrical jolt zinged off her wingtips; the air smelled singed with a hint of ozone. “I haven’t been here since we lived in the Old Country,” she murmured.

“That long?” At least the funereal quality had left his voice. “Why?”

The anger that had eluded Dewi earlier slammed into her like a runaway train. Fire boiled from her belly and erupted through her mouth. “Because,” she snarled, “there were hundreds of years when I was convinced I was the only dragon left alive. Why would I want to return to our world—unless I planned to die?”

“You gambled when you tried to free me that first time.” Nidhogg’s tone was soothing, gentle. “In your place, I would have done the same.”

“I may have gambled, but I lost,” she moaned. “I tried my damnedest to liberate you from the dark gods, but I wasn’t strong enough, and I abandoned my clutch of eggs when I went after you. It was a hell of a choice. You or our children. In the end, I lost both.” She shook herself from nose to tail tip, and scarlet scales rained from her hide.

“I love you for trying to save me.” He turned his head and gazed at her. “You did rescue me. It just took a few hundred years longer than you’d hoped.” He hesitated through a couple wing beats. “I’ve never been so happy to leave anywhere as I was to escape that wretched borderworld Perrikus calls home. Ruler of power and energy, my ass. Petty despot, more like. He only kept me alive to siphon my magic, so he could keep his pathetic excuse for a world from withering. That idiot D’Chel didn’t help matters. He’d stop by my prison and gloat until I wanted to smash his face in and shove those perfect teeth of his down his throat.”

“How did you know dragon’s fire would reanimate our eggs?” she asked. “If I’d known it was that simple, I’d have done it long ago.”

“I didn’t. Not for certain. I’m much older than you, Dewi.” He blew a gentle tongue of flame her way. “It’s entirely possible I’m the oldest living creature on Earth. I hold bits and pieces of things, images that float in my mind. We had nothing to lose.”

Dewi thought about the shrine she’d made of her clutch when she returned without Nidhogg after her first rescue effort. She’d mourned so deeply, the eggs were surrounded by mounds of precious gemstones from her tears. “I suppose you’re right,” she murmured and stopped. No reason to admit she’d also kept the eggs as a reminder of her own fallibility.