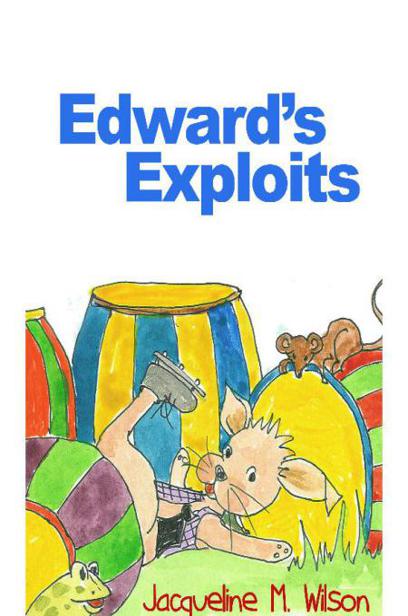 Digital Edition converted and distributed in 2011 by

The author has asserted her moral rights

This book is sold subject to the condition that no part of this book is to be reproduced, in any shape or form, or, by way of trade, stored in a retrieval system or transmitted in any form or by any means, electronic, mechanical, photocopying, recording, be lent, re-sold, hired out or otherwise circulated in any form of binding or cover other than that in which it is published and without a similar condition, including this condition being imposed on the subsequent purchaser, without prior permission of the copyright holder.

Edward was packing his suitcase, he had put in his best shorts and hat

Eric the fox was going to feed his goldfish, so he left the key under the mat

He made some jam sandwiches and took his train guide

Edward was off on holiday, off to the seaside.

The other passengers were getting fed up with him, so he thought of a game to play

He counted all the brown cows he could see, now this really was fun

The game didn’t last long, it was getting boring, he’d counted a hundred and one!

His auntie had been waiting for his train to arrive

She was cuddling him so tightly Edward felt his legs go weak!

About when Edward was young, how he and his brother had made a raft

Their adventure was cut short, the raft sank and the water was up to their knees!

At last they arrived at aunt Kate’s house, Edward went to find his uncle Ted

Edward helped his uncle paint until his tummy started to rumble

Just at that point aunt Kate came out and said “who’s for apple crumble?”

Not only was there apple crumble but scones, chocolate cake and home made bread

Edward had never seen so much food, his eyes nearly popped out his head!

He ate as much as he possibly could, then he ate a little bit more!

He would really have to stop now, his tummy was getting very sore

He went outside and played in the sand, with his bucket and spade

And built the biggest and best sandcastle he had ever made

Then went walking across the rocks and looked in the old caves.

Edward loved to explore, but the caves were dark and he was a bit wary

What if he should meet a spider that was big, black and hairy!

He found the shell of a dead crab and put that in his pail as well.

It was getting dark and getting late, it was nearly time for bed

He saw the light in the distance, what a welcoming sight

He said goodnight to his aunt and uncle and went out like a light.

Having adventures in the caves, he wasn’t worried about spiders any more

He would pretend to be a famous explorer, a pirate or sometimes a buccaneer

Who would always be the hero of the story and never show fear.

But when he dug up a dead crab, or bones of a fish some of them ran a mile!

He had been there seven days which he found hard to believe.

As he waited to board the train, his aunt and uncle said goodbye

“We have enjoyed having you, please come back next year.”

Night Terrors by Dennis Palumbo
The Feathery by Bill Flynn
A Rag-mannered Rogue by Hayley A. Solomon
Tessa in Love by Kate Le Vann
Appleby's Answer by Michael Innes
Proof of Intent by William J. Coughlin
Hell Without You by Ranae Rose
The Convulsion Factory by Brian Hodge
We Wish to Inform You that Tomorrow We Will Be Killed with Our Families by Philip Gourevitch
Notorious in Nice by Jianne Carlo