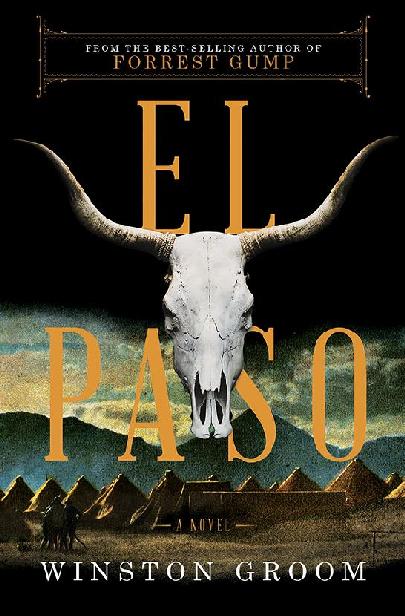 Three decades after the first publication of
Forrest Gump
, Winston Groom returns to fiction with this sweeping American epic.

Long fascinated with the Mexican Revolution and the vicious border wars of the early twentieth century, best-selling author Winston Groom brings to life a much-forgotten period of history in this episodic saga set in six parts. Pitting the legendary Pancho Villa against “the Colonel,” a thrill-seeking Bostonian railroad tycoon whose fading fortune is tied up in a colossal ranch in Chihuahua,
El Paso
opens during a time of dramatic upheaval in Mexico—its government being squeezed on one end by Villa’s revolutionaries and on the other by “filthy” American capitalists.

Content to observe the war from aboard his dazzling yacht, the
Ajax
, the Colonel is suddenly pulled into this drama when his famous Valle del Sol ranch is raided for nearly “two million and a half dollars in beef on the hoof.” Oblivious to the realities of war and hoping to salvage his losses, the Colonel whisks his family down to Mexico where they make a disturbing discovery: it was Villa who not only stole the cattle but also murdered their beloved ranch manager. Even worse, Villa’s henchmen abduct the Colonel’s grandchildren in another daring raid only days later.

Frantic, the aging patriarch and his adopted son race to El Paso, hoping to gather a group of cowboys brave enough to hunt down the generalissimo on his own turf. As the desperate Yankees quickly learn once they return to Chihuahua, their deep pockets and political clout mean next to nothing in a crumbling nation rife with communist sympathizers. After weeks of searching and with no trace of Villa, the Colonel fears all is lost—that is, until a twist of fate unites his party with that of Johnny Ollas, an aspiring matador whose wife has also been kidnapped by the marauding revolutionaries. Bloodied and battered, the two factions unite, galloping off on an extraordinary manhunt through some of the most inhospitable terrain on earth: the vast and snake-ridden Sierra Madre.

The novel explodes into an epic as an extraordinary cast of characters from both history and imagination begin to emerge, all vying to get their hands on the ever-elusive Villa. But no matter what prize each player ultimately seeks, no one is left unscathed in this sprawling story of heroism, injustice, and love. Replete with shootouts, daring escapes, and an unforgettable bullfight,
El Paso
brings to life a crucial moment in history and, in the process, becomes an indelible portrait of the American Southwest in the final days of the wild frontier.

“[Groom] combines military savvy with storytelling skill for a satisfying saga pitting an American railroad tycoon against Mexican revolutionary Pancho Villa…An engaging epic that could be headed for the bestseller lists and then the big screen. This is the big one that fans have been waiting for, and they’ll grab it up like they would a delicious box of chocolates.” (Michele Leber - Booklist (starred review))

“Groom’s expansive, rich novel is set in the harsh deserts and mountains of northern Mexico during the 1916 Mexican revolution, with sharply drawn fictional characters in a bloody mix with Gen. Pancho Villa and a cast of true-life personalities. . . . Battles, a tense prisoner exchange, and clever ransom negotiations round out this historically vivid and marvelously complex tale.” (Publishers Weekly)

“Dark and daring,
El Paso
does for the West what Gump did for the South ― it takes a tumultuous, crucial time in American history and feeds it to us in ways acute and unforgettable.” (Laura Taylor - Oxford Exchange)

Winston Groom is the author of twenty previous books, including Forrest Gump, Conversations with the Enemy (Pulitzer Prize finalist), Shiloh 1862, and The Generals. He served in Vietnam with the Fourth Infantry Division and lives in Point Clear, Alabama. 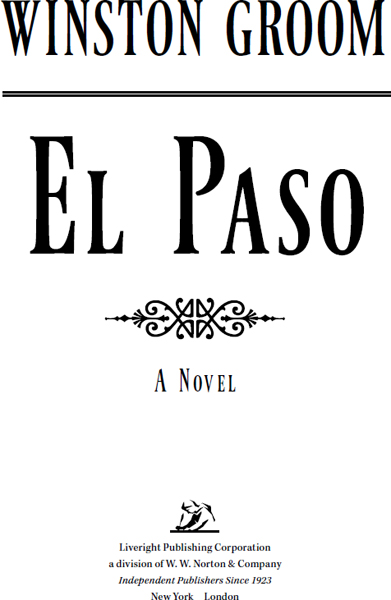 To the memory of Edwin D. “Eddie” Morgan

fine friend, and raconteur of this expansive tale.

When you were seven you would come into my office and ask what I was doing—I was writing your book
, Patriotic Fire,
a tale of pirates, soldiers, Indians, heroes, and scoundrels at the Battle of New Orleans in 1815.

When you were twelve I wrote another story for you
, Kearny’s March,
about the Mexican War of 1848—about explorers, mountain men, Indians, presidents—and always the heroes and the scoundrels
.

It’s ever the same—in history, novels, life, and in this book for you—those heroes and those scoundrels provide the grace and disrepute that makes our species, above all animals, at once interesting, and unique.

N
ovels don’t usually need forewords but in this case it seems useful that the reader know the background of the events depicted herein.

Beginning in the late nineteenth century the Mexican government—in eternal social and financial turmoil—started selling off vast tracts of land in its desolate northern provinces on the notion that wealthy American entrepreneurs would exploit the land by building infrastructure that the government in Mexico City could not afford. Accordingly, the Guggenheims began to develop large mining operations in Northern Mexico, Harrimans built railroads, Morgans, Hearsts, and Whitneys developed enormous livestock ranches, and so on, employing thousands of Mexican citizens until, inevitably, the revolution moved northward.

The gist of this story—the kidnapping of children by the legendary revolutionary general Pancho Villa, and the manhunt through the Sierra Madre—was suggested to me by a dear friend, the late Edwin “Eddie” Morgan, of the New York Morgans, whose grandfather owned an immense cattle ranch in Chihuahua, Mexico, that in 1916 was attacked by Villa’s army and later confiscated by the Mexican government during the revolution. Eddie regaled friends with stories of his grandfather and entourage riding in his private railcar from New York down to Chihuahua, the purchase of the bear in Nashville, and the great cattle drive to El Paso. Pancho Villa actually strung up Morgan’s ranch manager and had him sabered to death—the same manager who, when once asked by a large Chicago meat packer if he could supply thirty thousand head of cattle, wired back: “Which color?”

Those were strange and romantic times for the new century, with the Great War raging in Europe and the Mexican Civil War threatening to spill over into the United States. Colorful American characters, from the journalist-socialist John Reed to the misanthropic satirist Ambrose Bierce, soon found themselves tangled up in the thing, for better or for worse, and although this is not a “historical novel,” I couldn’t resist throwing them into the story. Serious students of the period will find that I have tampered with the evidence from time to time to present the more interesting tale, which—as I am also a writer of history—I usually try never to do. But in this case, as a novelist, I think I can get away with it.

O
ften, when he was anxious or depressed, Arthur Shaughnessy would stand behind his large desk in the First Vice President & General Manager’s Office of the New England & Pacific Railroad Company’s operations headquarters in Chicago, looking through the plate-glass window at the rail yards. From his vantage point three stories above, endless miles of rail track led into and out of the yards as far as the eye could see. Abutting the coal piles—each its own mountain of black with a towering metal crane and shuttle jutting out from the top—were hundreds of outdated and rusting boxcars, flatcars, passenger cars, and locomotives parked on sidings, waiting for the scrap heap. But closer, the scene was more animated. Engines of all types were arriving and departing; hauling freight, passengers, and in some cases other engines—yard locomotives pulling or pushing a big sixteen-sprocket beast to the roundhouse or repair sheds.

The trains came from all points of America: up though New Orleans and the South with cotton, fruit, and the spoils of the Caribbean; down from Wisconsin and Michigan with dairy and wheat; from the Pacific with lumber, the Southwest with livestock for the packing houses, the Midwest and Great Plains with corn and grain, coal from Kentucky and West Virginia; from Pennsylvania, steel; from the Rockies with metal ore for the smelters; and from the Atlantic Coast, finished goods—clothing, furniture, glassware . . .

And some not-so-finished goods: great unwashed hordes of emigrants from Europe.

Chicago in 1916 was the hub of everything that moved by rail across America.

ARTHUR SHAUGHNESSY STOOD AT THE WINDOW
with a telegram in his hand. He’d already read it, and merely let it dangle by his side as he surveyed the scene below, where scores of men moved in every direction.

They came in motor trucks and mule-drawn wagons, handcarts, man-carts, and on one platform a gang of black men unloaded green bunches of bananas by hand from a freight car just in from the Gulf Coast.

Somehow, all the activity had the effect of taking him away from his troubles, which were many.

Since the window was closed, Arthur could barely hear the cacophony rising toward him, a din that screamed up day and night: the blaring of whistles, the roar of engines letting off steam, the hissing blasts from air breaks, the clanging of bells, the rumble of the locomotives, the creaking of railcars. And awash in it all was the shouting of flagmen, switchmen, oilers, brakemen, firemen, signalmen, porters, conductors, and the cursing and yelling and chanting of the freight gangs and yardmen of all stripes—many of them were on the payroll that Arthur was somehow supposed to meet by the end of the week.