Read Eland and Jeanne (Tales of the Shareem) Online

Eland and Jeanne (Tales of the Shareem) 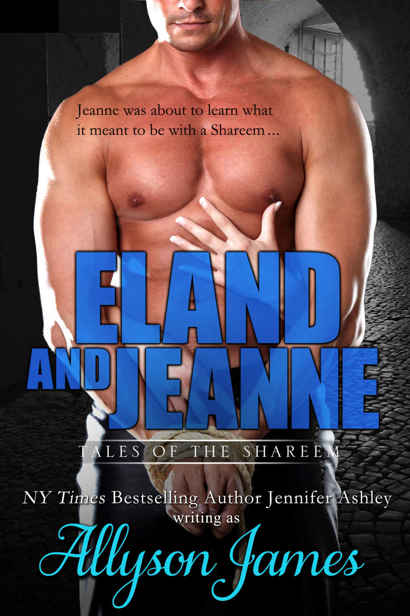 Is banging on my door in the middle of the effing night?

Jeanne mumbled threats at whoever had the gall to wake her before her early shift as she stomped to the front entrance of her tiny apartment. She thumbed open the door, letting in the intensely hot air of a Bor Nargan night.

No one was there.

Jeanne took a step outside—carefully, in this neighborhood—and looked about. She saw shadows of the grimy buildings and deeper shadow between them, the street unnervingly quiet.

“Sable?” she asked in a soft voice. “Is that you?” Sable was a wild lad of about nine years, who liked to talk with Jeanne when he wasn’t running away from his dad. His dad kept all hours as a dockworker, and Sable went where he pleased when he pleased.

No answer. A shiver went down Jeanne’s spine.

But what thief would bother making Jeanne open the door? She wasn’t exactly a highborn woman, with a flat up on the hill full of paintings and jewelry. She worked at the docks, earned decent pay, lived in a drab part of Pas City, and spent her weekends at Judith’s bar.

Still, the silence unnerved her.

Jeanne slipped back inside the flat, closed the door, and locked it.

Her anger surged. “All right, Sable, that’s not funny.”

Jeanne slammed open the door again. A man stumbled straight into the apartment, running into her and shoving her back inside.

He was a big man, wearing next to nothing, taking her down with him as he fell. Jeanne drew a breath to shout for help, but he clapped his large hand over her mouth.

His voice was broken. Bor Narga was a desert world, and people died quickly without hydration. When the sandstorms blew through, it was law that you shared your shelter and water with anyone who needed it. But there was no sandstorm tonight.

The man seized her by her wrists. “Water.
Please
.”

“You have to let me up first,” Jeanne said, her own voice cracking.

He blinked at her with those bizarre eyes. His skin was hot, hotter than anyone’s should be, Jeanne could feel through her thin nightshirt.

He slowly unfolded himself from her, taking away his weight and warmth, then reached down and pulled Jeanne up with him.

Strength. Jeanne’s bare feet came off the ground and hit the floor’s matting again when the man released her. She stepped back, heart thumping, and finally got a good look at him.

She’d never seen anyone like him before. He was huge, powerful, and unclothed except for a dirt-creased piece of cloth around his waist. On this planet of blasting heat, nobody walked around with that much skin exposed.

He stood a good foot and a half taller than Jeanne, and his body was sleek, tight, and tanned by the sun. Light-colored hair had been chopped short against his head, and a black chain made of some flexible metal encircled his right biceps.

Jeanne sucked in a breath. Despite the grime, he was a beautiful creature, most likely from off-world, though she had no idea from which planet. As a dockworker, Jeanne saw males and females of many different species, but she’d never encountered one like him.

“Who the hell are you?” she asked.

The man braced himself against the nearest wall, his biceps bulging under the black chain. He wet his lips and tried to speak, but only a dry croak emerged from his throat.

Water. Right. Jeanne hurried into her small kitchen and brought back a dripping container.

He took it without thanks, put the cup to his lips, and gulped down its contents in two seconds flat. He held out the cup, the look in his eyes so desperate that Jeanne went back into the kitchen and got him a refill.

He drank the second a little more slowly, closing his amazingly blue eyes while he savored the liquid. His throat moved with his swallow, and water dripped from his fingers.

He made a soft sound, like a man experiencing great pleasure. For some reason, the sound made Jeanne’s body tight.

She cleared her throat nervously. “I asked, who are you?”

He opened his eyes and fixed her with his blue stare before wiping his mouth and handing her the empty container. Every movement was sensual, though not in a practiced manner, as though he didn’t know how to move any other way.

His voice, rough with thirst, had an undertone of velvet, as sensual as his body. The tone was compelling, making Jeanne want him to say more so that she could listen. Wouldn’t matter what he said, as long as kept on in that delicious voice.

“I’m Jeanne,” she said. “What are you doing wandering the streets dying of thirst? You’re not Bor Nargan, are you?”

Bor Nargan males tended to be slender and on the small side. They also wouldn’t be foolish enough to walk around with no water or a breath mask. When sandstorms came through, those caught outdoors without breath masks died. As simple as that.

To her surprise Eland laughed, a grating, dry-throated laugh. “I
am
Bor Nargan, sweetheart. More Bor Nargan than anyone here will ever be.”

Jeanne blinked, her fear receding in the face of curiosity. “What the hell does that mean?”

Eland’s lips were still wet with the water, making them red and inviting. He drew his gaze down her body in a slow study, resting it on her breasts, which tightened behind her sleep shirt. The blue part of his eyes got wider.

A droplet of sweat rolled down Jeanne’s spine. She had a sudden vision of herself yanking up her shirt and letting him look his fill.

Why on earth did she want to do that? She wasn’t demonstrative, and though she had an interest in learning about sex and sensual pleasures, she didn’t throw herself at men she’d just met, especially not ones who pushed her into her own house and demanded water.

She jammed her arms over her chest. “If you’re from Bor Narga, why were you out on the street like
that
? You’ll fry as soon as the sun comes up, and possibly be arrested. And why don’t you have water or a breath mask with you? Were you in an accident? Do you need a medic?”

Eland listened to each question without changing expression, studying her with continued intensity.

Jeanne tightened her arms, her heart beating faster in trepidation. “Or I could call a patroller.”

Instantly, Eland’s eyes grew less blue, becoming almost icy gray. He grabbed Jeanne by the shoulders and pushed her up against the nearest wall.

“No. Don’t.
Please
.” His grip was strong, holding her in place, but at the same time not hurting her. “I’ll give you anything you want. A night of pleasure you’ll never forget—I can show you pleasure you didn’t even know existed. But please,
please,
don’t call the patrollers.”

This large, intensely strong man was begging. Afraid. Sick with fear. The terror in his eyes was similar to the terror in Sable’s when bullies followed him home and tried to kick the shit out of him.

And what did he mean he could show her pleasure she didn’t know existed?

“I won’t,” Jeanne said, gentling her voice. “As long as you tell me who you are, and why you’re afraid of patrollers.”

“I can’t.” Eland’s breath caught. He released her but didn’t back away. “But you won’t regret it, I promise.”

His voice might be rasping, but he looked at her in a way that made Jeanne warm all over.

She was also very aware of his body close to hers. Her thin sleep shirt hung to mid-thigh, letting her feel the heat of his bare leg as it brushed her.

Jeanne wanted for some reason to slide her hands to her breasts, to tease her nipples through the thin fabric of her sleep shirt. She’d step away from him and let him watch her tugging her nipples, showing him how tight they were. The temptation was so strong she deliberately folded her arms, digging her fingers into her flesh.

“Do it,” Eland said. His voice had gone soft. “Play with them for me.”

Jeanne swallowed, her face heating. He couldn’t know what she’d been thinking. Could he?

“Why not? You’ll enjoy it, sweetheart. I’ll make sure of it.”

Jeanne shook her head, though it was difficult. “Nope. This is
my
house, and I only play with what I want to, when
I
want to.”

The blue eyes fixed on her in a way that made her start shaking again. Jeanne never shook—she was strong, competent. This man made her feel small, almost delicate, like a desired object. Beautiful. Sexual.

She unfolded her arms, the fabric of her shirt scraping against her now-sensitive breasts. “I have a shower in there.” She pointed past him at her bathroom door. “You can clean yourself up before you go.”

Instead of obeying, Eland reached out and touched her hair. That was all, the slightest touch, but electric warmth shot through her, like an arc from a welding torch.

Jeanne felt as weak as a newborn desert cat. A smile tugged the corners of Eland’s mouth, and Jeanne’s heart pounded. She wanted to kiss that mouth, lick those lips, taste the water that lingered on them.

He lowered his hand and backed away, turning toward the bathroom and slapping the control to open the door. He entered the tiny room, pulling off his loincloth as he went.

The view of Eland from behind stuck Jeanne’s tongue to the roof of her mouth. His ass was smooth, firm, and sun-bronzed, finishing off a line of back that spoke of tight strength.

A year ago, Jeanne had succumbed to temptation with an off-world pilot and got her first taste of fondling. No full sex, just touching and exploring. It was a secret, naughty memory she had discussed only with her friend Judith, and relived when she got lonely.

Jeanne had discovered that Judith was the only person on Bor Narga who didn’t mind talking about sex.
Wanted
to talk about sex. Had actually
had
sex.

When Jeanne had learned of Judith’s sexual experimentation, she’d wheedled the stories out of the woman. It was through Judith that Jeanne had met up with the off-world pilot to try things out.

The pilot’s attributes were nothing compared to Eland’s. Eland was a big man, but he moved with ease. Nothing about him was disproportionate or awkward, as though he’d been expertly sculpted.

Eland glanced back at her, sending her a warm smile when he caught her gaze.

“Come in and watch,” he offered in his dark voice, and then the automatic door slid shut, cutting off the beautiful sight.

Eland closed his eyes as the warm water washed over his body. He’d have preferred a sterilizer, but a fugitive had to take what he could get.

He was lucky that the woman had let him ease his thirst without calling the patrollers. The only explanation for her hospitality and continued generosity was that she must not realize what he was.

The DNAmo facility had been invaded by patrollers and shut down only two days ago. When the researchers had started bailing, word had rocketed among the Shareem that the Ministry of Non-Human Life Forms was poised to take control, though they hadn’t made the news public yet.

Crystal Venom by Steve Wheeler
Indigo Sky by Ingis, Gail
Banana Hammock by Jack Kilborn
VANCE by Hawkes, Leila
Sex Slave at Sea by Aphrodite Hunt
Seven by Claire Kent
Escape From Hell by Larry Niven
Seduction on the CEO's Terms by Charlene Sands
I Can Get It for You Wholesale by Jerome Weidman
Wordscapist: The Myth (The Way of the Word Book 1) by Arpan Panicker