I waited until there was a lull in Jake’s howls, then tipped his head up with the knifepoint and gazed into his eyes. They’d lost all hint of their red, fiery magic. Now, his brown irises were wide and glossy with panic, fear, pain.

“You ever come to my restaurant and fuck with me or my customers again, and I’ll carve you up like a Thanksgiving turkey.”

I slashed down with the knife, breaking the skin on his beefy neck. Jake yelped at the sting and clawed at the slight wound with his sausage-thick fingers. I slapped his hand away and nicked him again. The smell of warm, coppery blood filled my nose. Something else that hadn’t bothered me in a long, long time.

“Every time you move, I’m going to cut you again. Deeper and deeper. Nod your head if you understand.”

Hatred flared in his gaze, taking the edge off the pain and panic, but he nodded.

I clipped his temple with the knife hilt. Jake’s head snapped to one side and fell onto the floor. Unconscious. Just like his friend Lance.

I stood up, wiped my fingerprints off the knife, and dropped the weapon on the floor. The half-giant didn’t stir. Then, I got to my feet and headed for the girl, still crouched underneath the table.

She shrank back against the legs of a chair at my approach, like she wanted to melt into the metal. Her pulse fluttered like a mad butterfly against her temple. I put my friendliest, most trustworthy, charming, southern smile on my face and crouched down until I was eye-level with her.

“Come on, sweetheart,” I said, holding out my hand. “It’s over. Those men aren’t going to hurt you now.”

Her chocolate eyes darted to Jake lying on the floor. Her gaze flicked back to me, and she chewed her lip, her teeth white against her toffee skin.

“Cassidy!” the other woman called out since Sophia still wasn’t letting her go. “Are you all right?”

Her friend’s voice penetrated Cassidy’s fearful daze. She sighed and nodded her head. The girl reached out, and I grabbed her trembling hand. Cassidy’s fingers felt like thin, fragile icicles against the thick scar embedded in my palm. I tugged the girl to her feet. She eyed me with understandable caution, so I kept my movements slow and small, not wanting to startle her.

Sophia let go of the other woman, and I stepped back. Eva rushed forward and caught her friend in a tight hug. Cassidy wrapped her arms around the other women, and the two of them rocked back and forth in the middle of the restaurant.

I walked over to Sophia, who was watching the two women with a flat expression on her pale face.

“Friendship. Ain’t it a beautiful thing?” I quipped.

But the corner of the Goth dwarf’s lips turned up into a tiny smile.

The two girls hugged a minute longer before Eva pulled a cell phone out of her jeans.

“You call the cops,” Eva told her friend. “I need to let Owen know I’m okay. You know how he is. He’ll freak when he finds out about this.”

Cassidy nodded her head in sympathetic agreement and pulled her own phone out of her jeans. The two women started dialing numbers, instead of asking me, the restaurant owner, to do it for them. Not surprising. If you wanted the cops, you called them yourself. You certainly didn’t depend on the kindness of strangers to do it. Not in Ashland.

I frowned. Cops. Just what I needed. Some of Ashland’s finest getting an eyeful of me, the former assassin, a Goth dwarf who liked to dispose of dead bodies in her spare time, and the two guys we’d so easily dispatched. Not the kind of attention I wanted to draw to myself, even if I was retired now. Nothing I could do about it now, though.

Sophia went back to the stove to check on her baked beans. Eva spoke in a low voice to someone on her phone. Cassidy finished her 911 call and sank into the nearest chair.

The girl stared at Jake on the floor, then her brown eyes flicked to the bloody knife. Her lower lip quivered, her eyes grew glossy, and her hands trembled. Trying to hold back the tears. Something else I’d had to do, once upon a time.

I walked over to the counter and picked up a glass cake plate filled with the black forest cookies I’d baked this morning.

“Here.” I took the top off and held the plate out to her. “Have a cookie. They’ve got plenty of sugar and butter and chocolate in them. They’ll help with the shakes.”

Cassidy gave me a wan smile, took one of the chocolate treats, and bit into the concoction. The bittersweet chocolate melted in her mouth, and her eyes brightened with pleasure instead of worry.

Eva finished her call and sat down next to her friend. Her hands didn’t tremble as she snapped her phone shut, and she looked at Jake with a thoughtful expression. The only sign anything had happened to Eva was a red welt on her cheek, where her face had smacked into the floor. The girl had a level head on her shoulders and a firm grip on her emotions. But that didn’t mean she wouldn’t crash later.

Eva took a cookie, broke it in two, and stuffed half of it into her mouth. Not shy, either.

I also plucked one of the chocolate treats off the stack. Not because I had shaky nerves, but because they were damn good cookies. After a month of trying, I’d finally perfected the recipe.

I looked at the two unconscious men on the floor. Lance lay spread-eagle next to one of the booths where Sophia had dropped him. Blood continued to drip from the cuts on Jake’s throat and temple, staining the floor a rusty brown.

I grabbed another cookie off the plate and watched him bleed. 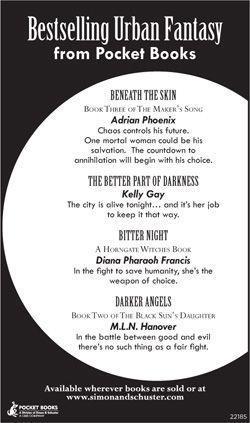 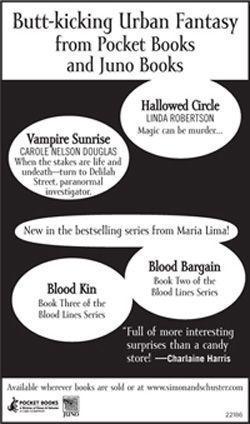 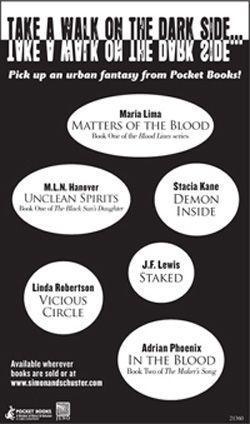 Edith’s Diary by Patricia Highsmith
Villain School by Stephanie S. Sanders
No Time to Die by Kira Peikoff
Promote Yourself by Dan Schawbel
Church of Chains by Sean O'Kane
Marked by Moonlight by Sharie Kohler
Deep Water by Nicola Cameron
Snow Bound: The Complete Story by Julia P. Lynde
Bayonets Along the Border by John Wilcox
In the Belly of Jonah by Brannan, Sandra