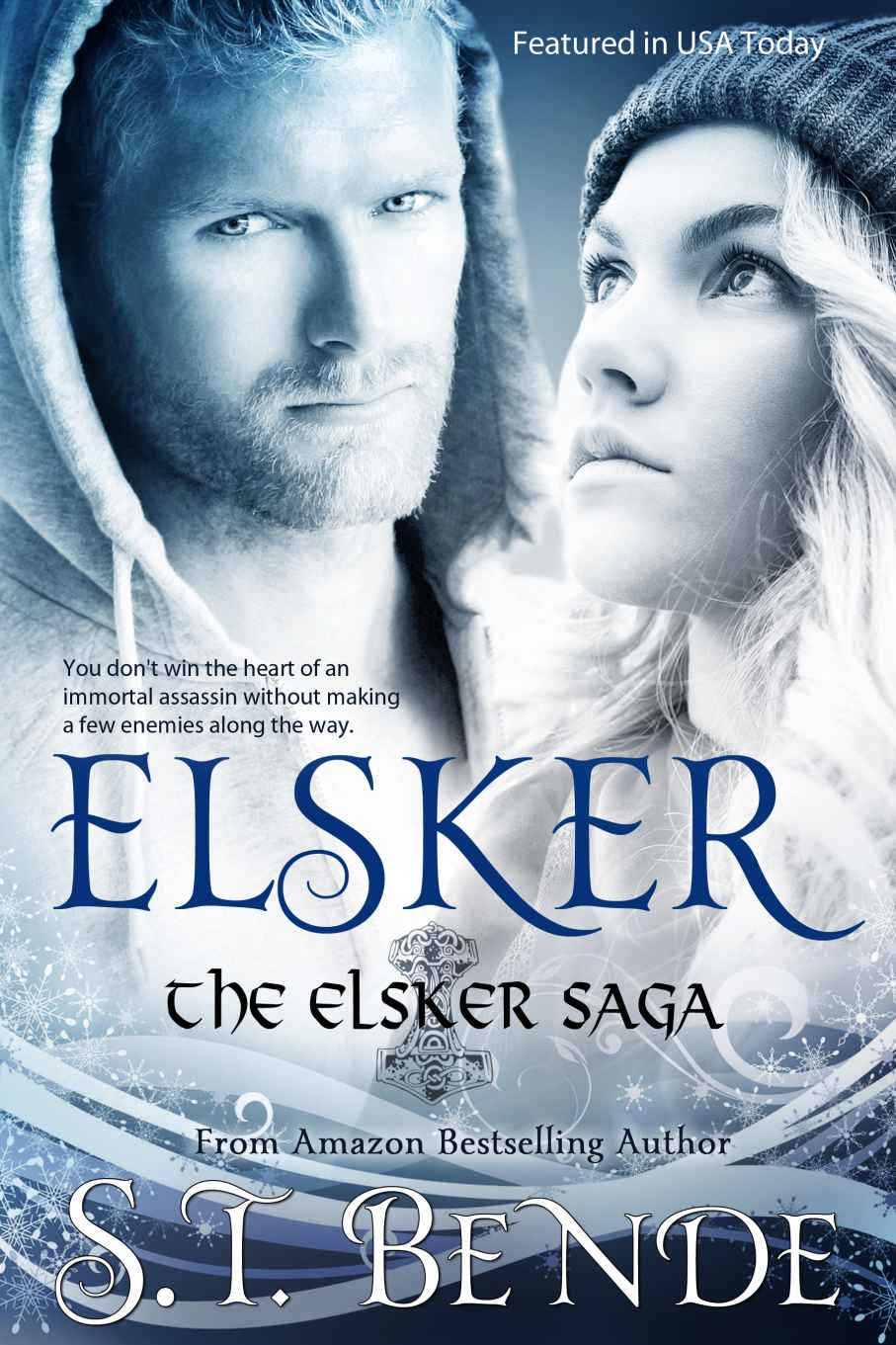 This book or any portion thereof may not be reproduced or transmitted in any form by any means, electronic or mechanical, including photocopying, recording, or by any information storage system without the express written permission of the author except for the use of brief quotations in a book review.

The Prophecy of Ragnarok

Kristia Tostenson prefers Earl Grey to Grey Goose and book clubs to nightclubs, but when she transfers from her one-stoplight town to Cardiff University in Wales she falls in love with Ull Myhr. Her new boyfriend isn’t exactly what she was expecting. He’s an honest-to-goodness Norse God — an immortal assassin fated to die at Ragnarok, the battle destined to destroy Asgard and Earth. Kristia’s crazy visions are the only thing that can save their realms.

To my three boys –

I wished for you upon a star, and all my dreams came true.

An enormous thank you to my handsome husband – for choosing me, and being my perfect teammate.
Jeg elsker deg.

Mange takk
to our amazing boys, the greatest blessings we could have hoped for. Your unconditional love inspires me daily.

To my remarkable teachers, Dr. Carnicke and Olaug – thank you for sharing your lessons and your names.

Much appreciation to the talented Jacqueline Gardner. We both know this story would never have left my computer without your encouragement. To my dear friend, Stacey Nash, for championing our gods even on their darkest days. To Gary Rubin, for your kind feedback on my very rough drafts. And to my lovely editor, Eden Plantz, who shaped my words with such finesse, and went out of her way to see Ull come to life. Again.
Takk.

Huge gratitude to Team Elsker, for keeping me laughing with your appreciation of #ChurchWaffles, #UllInATightSweater, and all things Gunnar. None of this would have happened without the readers, writers and bloggers who make up the best street team in all the realms. Y’all rock.

And eternal gratitude to MorMorMa, for making me a part of your family and introducing me to Norsk Waffles.
Tusen takk.

The Prophecy of Ragnarok

With the death of Balder, the powers of darkness will burst from their tethers. Jotunheim shall crack open; a terrible frost shall suffocate all things good. The great beast will attack, the wicked ship sail, and the light of Asgard will dim evermore. Fire shall consume the earth and Darkness shall swallow the sky. No one, God or Mortal, can survive the travesty of Ragnarok.

-Prophecy of The Norns

I MOVED FASTER THAN
a salmon down a chute in bear season. It was my only option. If the giant wolf biting at my heels didn’t kill me, then the tree-trunk of a snake twining between my feet was going to finish the job. I pumped my legs harder, exerting every modicum of strength I had left, and in the process, I stepped on the snake’s head. It hissed, a guttural reverberation bouncing around the darkness. I pushed harder. My chest burned, but I’d managed to put a little space between my attackers and me. The wolf growled angrily, but I didn’t look back. I couldn’t spare the movement.

Since it was pitch black, I couldn’t see what I was running towards, and I certainly didn’t see the fissures beginning to form in the dirt beneath my Nikes. My size six sneaker slid into one and I could hear the crack of my ankle breaking before I hit the damp earth. The chasm was getting bigger and soon my whole leg slipped through. My fingernails clung to the soil as it separated from itself, and I felt the chill creep over the ground as the terrible frost settled like a blanket onto everything it could reach. I started to shake – it would be death by freezing, then. But I knew chilled human wouldn’t be the worst thing the wolf and snake had eaten that day
.

“Earth to Kristia! Hello? Are you even listening?” I rubbed my eyes and focused on the frowning face of my best friend since kindergarten. A sprightly brunette, Ardis was everything I wasn’t – adventurous, perky, self-confident. And at the moment, highly irritated.

“Sorry.” I shook off the remnants of last night’s bad dream. Ardis Behrman didn’t often grace our hometown of Nehalem, Oregon. Three hundred residents and a solitary stoplight didn’t hold much excitement for a girl studying acting at NYU. I treasured any conversation we had that didn’t require text or Skype.

“Vision?” She cocked her head.

“The weird one about the animals hunting you down?” Ardis wrinkled her nose.

“That’s the one.” My favorite grandmother’s dark stories from the North were never far from my subconscious. I never understood how any woman in her right mind could lovingly recount the end of the mythological Norse world to an eight-year-old girl. Mormor always had a wicked sense of humor, so I liked to think her intentions were good. Or maybe she suffered from a touch of the crazy. The fact that, at eighteen, I still had vivid nightmares about Ragnarok; well, that spoke more about my own sensitivities than anything else. They were just stories.

“So.” Ardis rested her hands on the table. The metallic blue sparkles on her nails caught the light of the coffee shop where we’d had countless heart-to-hearts. “What’s new in Nehalem?”

I stopped just short of rolling my eyes. “Good one Ardis.” Nothing changed around here but the weather, and even that was freakishly consistent.

“And the University of the Pacific Northwest?”

“You do realize you’re the only member of our graduating class who doesn’t go there, right? The only one who isn’t going to end up married to someone they’ve known since kindergarten. And spend eternity working in the boring log mill or tourist traps.” It would be the latter for me. My parents’ antique shop was popular with the summer crowd and I was expected to begin fulltime work when I graduated. Not exactly the stuff of dreams.

“If you’re that bored, don’t just sit around waiting for something to happen to you – go out and grab it.”

“It’s not that easy,” I mumbled. Ardis was one of those people to whom good things came naturally. She didn’t understand that life didn’t just fall into place for the rest of us.

I glanced up as our waitress set two steaming mugs on our table with a little too much force. I raised my eyebrows. “Is everything all right today, Susan?” My voice strained with the effort of false nicety. In our twelve years of school together, Susan had always treated me like a social pariah. Clearly nothing had changed since graduation. I may not have been well bred, but I
was
well raised. I pasted on my best fake smile, though after enduring a lifetime of whispers and stares I had a very low tolerance for rudeness. It was my absolute pet peeve.

I held Susan’s glare with my own pleasant look until she scurried back to the kitchen, obviously uncomfortable. Well, I was used to that.

“Sorry, what were you saying? You don’t think it’s easy to change your life? You only think that because you’ve never tried.” Ardis sipped impatiently at her latte, the unofficial beverage of our rain-drenched town. “Look, Kristia, you’re my best friend and I think you rock. But is sitting around Nehalem for the rest of your life really going to make you happy? Really?” Score one, Behrman.

The minute she said it I was transported from the rainy-small-town coffee shop to a dreary house on the edge of Nehalem.

Rain fell outside the thin windows, and the air was damp with the faint scent of mildew. A cleaning caddy sat at my feet – judging from the smell of the bleach, I must have just scrubbed the toilets – and I sorted laundry while the television droned in the background. When the boredom consumed me, I crossed to a coffee table where I idly fingered my one indulgence in an otherwise uneventful life: my subscription to Travel Magazine. The cover boasted an Irish castle sitting in a brilliant green field of clovers
.

My heart tugged – in my vision I was thirty years old, and I’d never even been on an airplane. I forced myself back to the coffee shop, where Ardis was watching me closely.

“Absolutely nothing.” I shook my head. I was resolute. My life was not going to turn out that way. It was one vision that could never come true. I drew a breath. I was eighteen years old. Time to choose the path I wanted my life to take. There was a whole world out there – what was keeping me from living in it? From living, period? “I have three years of college left. I’m not spending it here. Not anymore.”

“Awesome,” Ardis nodded her approval. “So what are you gonna do?”

“I’m…” I was at a loss. I hadn’t thought that far ahead. “Well…” Then it came to me. “Got it! UPN has study abroad. The deadline isn’t for another two weeks. I’ll spend sophomore year somewhere totally different – somewhere people don’t know anything about me.”

“Bravo.” Ardis clapped loudly, to Susan’s chagrin. She glared at us from behind the counter. “So where do you want to go?”

I had to think. Now that I’d made the decision to leave the country, where should I go? I thought about the book on my nightstand – a Jane Austen classic. Those ladies seemed to be enjoying themselves, in their own angsty way. They certainly had a good time romping through the English Countryside. There was my answer. Once I’d made up my mind, I pictured something altogether different.

I was on a big, fancy jet, flying towards Europe. A flight attendant handed me a coke with a lemon wedge, and I stared out the window at the endless, green meadows passing beneath. The businessman to my left read the
Wall Street Journal,
and the one across the aisle buried his nose in the
London Times.

Oh, crimeney. What had I gotten into now?

“So where are you going?” Like always, Ardis glossed right over my little mind trip. Bless her heart.

“England. No, Wales.” A few miles closer to home might make it seem a little less scary. I dropped my head in my hands. Darned hallucinations. I hadn’t had one in months, and I’d just had two in as many minutes. It was with no small amount of pleasure that I took the visions back.

The three hundred townsfolk of Nehalem whispered about my “handicap” when they thought I wasn’t listening – actually, it was a mental problem. It was generally accepted that I was two trees short of a forest. Thanks to some glitch in my brain, I saw random flashes of the future against my will. I’d been in two minor car accidents, failed four midterm exams, and had to avoid competitive sports entirely, all because I saw stuff at lousy times. This wouldn’t have been so much of a disability if I could have seen the winning lotto numbers, or even just the location of the radar-cops who hid along the 101. But to date, my premonitions had yielded zero useful tidbits. I saw the mundane, ranging from my mom doing a load of laundry to Ardis painting her toes fire-engine red. I was the world’s most useless psychic.