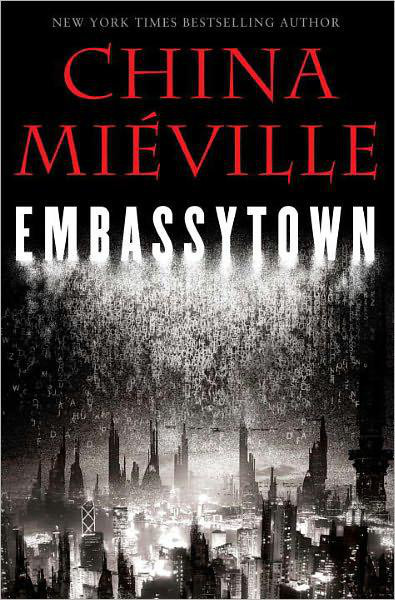 “The word must communicate
something
(other than itself)”

“On Language as Such and on the Language of Man”

T
HE CHILDREN
of the embassy all saw the boat land. Their teachers and shiftparents had had them painting it for days. One wall of the room had been given over to their ideas. It’s been centuries since any voidcraft vented fire, as they imagined this one doing, but it’s a tradition to represent them with such trails. When I was young, I painted ships the same way.

I looked at the pictures and the man beside me leaned in too. “Look,” I said. “See? That’s you.” A face at the boat’s window. The man smiled. He gripped a pretend wheel like the simply rendered figure.

“You have to excuse us,” I said, nodding at the decorations. “We’re a bit parochial.”

“No, no,” the pilot said. I was older than him, dressed up and dropping slang to tell him stories. He enjoyed me flustering him. “Anyway,” he said, “that’s not . . . It is amazing though. Coming here. To the edge. With Lord knows what’s beyond.” He looked into the Arrival Ball.

T
HERE WERE
other parties: seasonals, comings-out, graduations and yearsends, the three Christmases of December; but the Arrival Ball was always the most important. Dictated by the vagaries of trade winds, it was irregular and rare. It had been years since the last.

Diplomacy Hall was crowded. Mingling with the embassy staff were security, teachers and physicians, local artists. There were delegates from isolated outsider communities, hermit-farmers. There were very few newcomers from the out, in clothes the locals would soon emulate. The crew was due to leave the next day or the one after; Arrival Balls always came at the end of a visit, as if celebrating an arrival and a departure at once.

A string septet played. One of the members was my friend Gharda, who saw me and frowned an apology for the unsubtle jig she was halfway through. Young men and women were dancing. They were licensed embarrassments to their bosses and elders, who would themselves, to their younger colleagues’ delight, sometimes sway or turn a humorously stilted pirouette.

By the temporary display of children’s illustrations were Diplomacy Hall’s permanent hangings: oils and gouaches, flat and trid photographs of staff, Ambassadors and attachés; even of Hosts. They tracked the city’s history. Creepers reached the height of the panelling to a deco cornice, spread into a thicket canopy. The wood was designed to sustain them. Their leaves were disturbed by thumb-sized vespcams hunting for images to transmit.

A security man I’d been friends with years before waved a brief greeting with his prosthesis. He was silhouetted in a window metres high and wide, which overlooked the city and Lilypad Hill. Behind that slope was the boat, loaded with cargo. Beyond kilometres of roofs, past rotating church-beacons, were the power stations. They had been made uneasy by the landing, and were still skittish, days later. I could see them stamping.

“That’s you,” I said, pointing them out to the steersman. “That’s your fault.” He laughed but he was only half-looking. He was distracted by pretty much everything. This was his first descent.

I thought I recognised a lieutenant from a previous party. On his last arrival, years before, it had been a mild autumn in the embassy. He’d walked with me through the leaves of the high-floor gardens and stared into the city, where it had not been autumn, nor any other season he could have known.

I walked through smoke from salvers of stimulant resin and said goodbyes. A few outlanders who’d finished commissions were leaving, and with them a tiny number of locals who’d requested, and been granted, egress.

“Darling, are you weepy?” said Kayliegh. I wasn’t. “I’ll see you tomorrow, and maybe even the day after. And you can . . .” But she knew that communication would be so difficult it would end. We hugged until she, at least, was a little teary, and laughing too, saying, “You of all people, you must know why I’m off,” and I was saying, “I know, you cow, I’m so jealous!”

I could see her thinking,
You chose
, and it was true. I’d been going to leave, until half a year before, until the last miab had descended, with the shocking news of what, who, was on the way. Even then I’d told myself I’d stick to my plan, head into the out when the next relief came. But it was no real revelation to me when at last the yawl had crossed the sky and left it howling, and I’d realised I was going to stay. Scile, my husband, had probably suspected before I did that I would.

“When will they be here?” asked the pilot. He meant the Hosts.

“Soon,” I said, having no idea. It wasn’t the Hosts I wanted to see.

Ambassadors had arrived. People came close to them but they didn’t get jostled. There was always space around them, a moat of respect. Outside, rain hit the windows. I’d been able to ascertain nothing of what had been going on behind doors from any of my friends, any usual sources. Only the top bureaucrats and their advisors had met our most important, controversial newcomers, and I was hardly among them.

The city Hosts would come before long, and the last of the new arrivals. The captain and the rest of the ship’s crew; the attachés; the consuls and researchers; perhaps a few late immigrants; and the point of all this, the impossible new Ambassador.

W
HEN WE WERE YOUNG
in Embassytown, we played a game with coins and coin-sized crescent offcuts from a workshop. We always did so in the same place, by a particular house, beyond the rialto in a steep-sloping backstreet of tenements, where advertisements turned in colours under the ivy. We played in the smothered light of those old screens, by a wall we christened for the tokens we played with. I remember spinning a heavy two-sou piece on its edge and chanting as it went,
turnabout, incline, pig-snout, sunshine
, until it wobbled and fell. The face that showed and the word I’d reached when the motion stopped would combine to specify some reward or forfeit.

I see myself clearly in wet spring and in summer, with a deuce in my hand, arguing over interpretations with other girls and with boys. We would never have played elsewhere, though that house, about which and about the inhabitant of which there were stories, could make us uneasy.

Like all children we mapped our hometown carefully, urgently and idiosyncratically. In the market we were less interested in the stalls than in a high cubby left by lost bricks in a wall, which we always failed to reach. I disliked the enormous rock that marked the town’s edge, which had been split and set again with mortar (for a purpose I did not yet know), and the library, the crenellations and armature of which felt unsafe to me. We all loved the college for the smooth plastone of its courtyard, on which tops and hovering toys travelled for metres.

We were a hectic little tribe and constables would frequently challenge us, but we need only say, “It’s alright sir, madam, we have to just . . .” and keep on. We would come fast down the steep and crowded grid of streets, past the houseless automa of Embassytown, with animals running among us or by us on low roofs, and while we might pause to climb trees and vines, we always eventually reached the interstice.

At this edge of town the angles and piazzas of our home alleys were interrupted by at first a few uncanny geometries of Hosts’ buildings; then more and more, until our own were all replaced. Of course we would try to enter the Host city, where the streets changed their looks, and brick, cement or plasm walls surrendered to other more lively materials. I was sincere in these attempts but comforted that I knew I’d fail.

We’d compete, daring each other to go as far as we could, marking our limits. “We’re being chased by wolves, and we have to run,” or “Whoever goes furthest’s vizier,” we said. I was the third-best southgoer in my gang. In our usual spot, there was a Hostnest in fine alien colours tethered by creaking ropes of muscle to a stockade, that in some affectation the Hosts had fashioned like one of our wicker fences. I’d creep up on it while my friends whistled from the crossroads.

See images of me as a child and there’s no surprise: my face then was just my face now not-yet-finished, the same suspicious mouth-pinch or smile, the same squint of effort that sometimes got me laughed at later, and then as now I was rangy and restless. I’d hold my breath and go forward on a lungful through where the airs mixed—past what was not quite a hard border but was still remarkably abrupt, a gaseous transition, breezes sculpted with nanotech particle-machines and consummate atmosphere artistry—to write
Avice
on the white wood. Once on a whim of bravado I patted the nest’s flesh anchor where it interwove the slats. It felt as taut as a gourd. I ran back, gasping, to my friends.

“You touched it.” They said that with admiration. I stared at my hand. We would head north to where aeoli blew, and compare our achievements.

A
QUIET
, well-dressed man lived in the house where we played with coins. He was a source of local disquiet. Sometimes he came out while we were gathered. He would regard us and purse his lips in what might have been greeting or disapproval, before he turned and walked.

We thought we understood what he was. We were wrong, of course, but we’d picked up whatever we had from around the place and considered him broken and his presence inappropriate. “Hey,” I said more than once to my friends, when he emerged, pointing at him behind his back, “hey.” We would follow when we were brave, as he walked alleys of hedgerow toward the river or a market, or in the direction of the archive ruins or the Embassy. Twice I think one of us jeered nervously. Passersby instantly hushed us.

“Have some respect,” an altoysterman told us firmly. He put down his basket of shellfish and aimed a quick cuff at Yohn, who had shouted. The vendor watched the old man’s back. I remember suddenly knowing, though I didn’t have the words to express it, that not all his anger was directed at us, that those tutting in our faces were disapproving, at least in part, of the man.

The Black Sheep's Return by Elizabeth Beacon
Zombies! (Episode 7): Conflicts of Interest by Ivan Turner
Venomous
The Ecliptic by Benjamin Wood
Put Me In a Skirt and Hurt Me: The Strictly Lesbian Adventures of Mistress Sophia by Bryce, A.L.
Unbroken: A World War II Story of Survival, Resilience and Redemption by Laura Hillenbrand
Saving Ever After (Ever After #4) by Stephanie Hoffman McManus
Quicker Than the Eye by Ray Bradbury
Sun Wolf 1 - The Ladies Of Mandrigyn by Hambly, Barbara
Blood Ocean by Weston Ochse