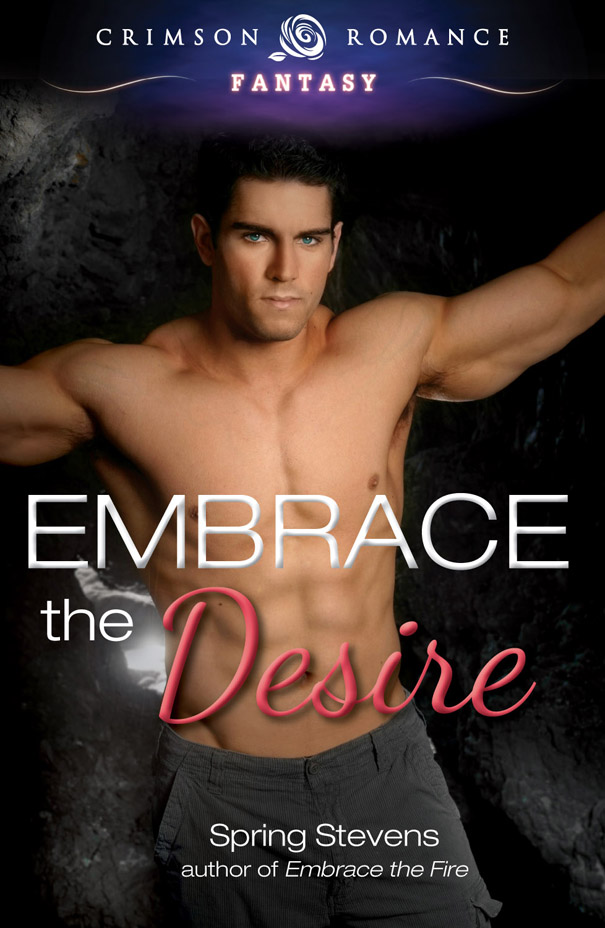 Lying in a bed of white silk and fur, Payne jerked hard on the chains anchoring him to the bed. The crippling pain that he endured still lingered in his muscles and deep within his bones. “Damn you to fucking hell! I will never break.”

He could survive pain; pain was something he was very accustomed to.

He was a Destroyer! He was a fighting, killing machine, damn it!

And he was chained like a dog, a beast! Expected and commanded to be subservient!

Flat on his back, straining against the enchanted chains, and with nothing else to do, he gave in to the thoughts running through his mind. Gyth, Lord of the Heavens and master of the Destroyers, leaned more toward torture and control than simple persuasion. No doubt, that was reason enough for the god to have enlisted Payne into his little army of immortal warriors whose chief purpose was to defeat his bitter enemy Damon, Lord of the Underworld.

A virulent laugh echoed around him. Gyth threw the Destroyers to the proverbial wolves, not caring who survived as long as the enemy did not. Yeah, the enemyâGyth's enemies.

In reality, the Destroyers were just a tool, Gyth's fighting force against the Underworld's offspring, even though they had been led to believe that the sole reason for their existence was to protect the One Race, the descendants of the gods that lived on earth. Yeah, right. The age-old battle between the Heavens and the Underworld, or in truth, the battle between Gyth and Damon, which in turn had wrought the rise of the Destroyers, otherwise known as Gyth's lapdogs.

Damon! The Serpent Lord of the Underworld,
a.k.a
. dear old dad.

The name ripped through Payne like shards of steel and ice. The day would come when that bastard would have to stand toe to toe with him and it was a day Payne would wait a hundred thousand lifetimes for. After he almost died when his mother-dearest and those foul-breathed witches practically flayed him alive just to make points with that scum, Damon, all he wanted to do was to cut everything of Damon's out of his soul and have his revenge. Afterwards, he had been adopted by humans and had determined to hone his fighting skills. The only thing that kept him sane was his lust for revenge. So, when Gyth came to him and offered a means to that end, he didn't refuse.

Now, almost two thousand years later, the plan was still the same as ever. Damon would die by his hands.

Burning rage festered in his black eyes. Every Destroyer had his reasons for accepting Gyth's offer to become one of his lapdogs and Payne sure as hell had his.

The name was a whisper on his tongue, an endless torment in his cold heart.

Her image surfaced in his mind transporting him back to a time when he had lovedâthe only time in his existence he had known such a thing. The only time he thought he was loved in return. He had memorized every detail of her faceâher long black silky hair, large dark innocent eyes, and the creamiest olive skin. She was perfection with a beauty that defied the natural world.

She had been the only good thing in his entire world.

Until he realized the truth.

The soft rustle of silk brought Payne's attention back to the predicament at hand. Gyth stood in front of the bed, his eerie topaz eyes clearly expressing his agitation. Like Payne really cared! After all, what could the bastard in white do to him that had not already been done countless times before?

His sarcastic laugh brought fury to Gyth's face. “Have you changed your mind Destroyer?”

“No,” Payne grunted softly. He wouldn't be so easily broken.

“You'll take the female known as Chanta Timbers through her Burning,” Gyth ordered with a haunting laugh. “She'll need a strong Destroyer to assist her transformation to the One Race.”

A female's face, one he knew, appeared in Payne's mind. Her skin was fair, her hair blonde, and her eyes the color of steel. His heart skipped a beat as her lips stretched into a blinding smile. She was light in the darkness, goodness personified. She was the exact opposite of Bastilla.

Topaz eyes met Payne's. “You'll do as I command.”

The order tugged at every ounce of Payne's willpower.

As a Destroyer, he had to follow Gyth's commands, and never disobey, like a dog on a leash, trained and obedient. But Payne was ever the disobedient one, so why mess with success?

With heavily dripping defiance, he replied, “I won't take her through the Burning! I enlisted in this shit-fest against Damon for one purpose and only one, so screw you!”

“Hmm, well so be it Payne.” Gyth's eyes swirled, turned white. “You shall endure the tortures of The Algea once again until your mind has changed.”

Chanta Timbers' face appeared again in his mind, her large eyes full of excitement and wonder as she read from a book in her lap. She was beautiful, enchanting, and full of vitality. And he cursed under his breath. Her face had plagued his dreams for eight years. Shutting his black eyes and forcing her image from his mind, a growl ripped from his chest in anger.

“Get out of my head!” Payne roared. “I won't take her through the Burning!”

With a flick of his wrist, a mammoth of a male god dressed in black leather appeared beside Gyth holding a set of manacles. “You summoned me my lord?”

“What are we waiting for?” Payne laughed as his feet were manacled. “Can't wait to see the bastards again!”

The leather bound brainless slave of Akhos, the spirit of pain, grinned. Through his razor sharp yellow teeth, he gurgled. “The Algea await your return. They so enjoy the company your body and mind provide.”

“I want him completely broken this time, spare no mercy, spare no pain. He is to be completely obedient.” Gyth frowned as he looked down at Payne. “You'll do as I command or you'll suffer the consequences again and again. Learn from your mistakes Destroyer or I shall put you down myself.”

“What's stopping you?” Payne spit out. “Two thousand years and I have yet to face Damon as you swore I would! Hold up your end of the bargain and I'll uphold mine!”

“The bargain was set, the deal between you and me was written in stone. One day, after you have served your purpose in my war against the evil of the Underworld, you'll have your heart's desire.”

“Two thousand years! How much longer do you expect me to wait?” Payne jerked on the chains again.

Gyth paused, his pristine white robes swirling round his feet as his eyes swirled and glowed white. “Time will lead you to the path that you must walk. Your destiny is before you Payne, choose very carefully when you face the crossroads ahead.”

A scream ripped through Payne's soul as the enchanted chains dug into his flesh. His back arched, the pain twisting inside his muscles, winding a path to every nerve ending in his body.

Refusing to break, he stared straight into Gyth's eyes with venom dripping from his lips. “I only walk one path and it will lead me to vengeance!”

Payne reappeared suspended over a bed of wooden stakes. If he fell, he wouldn't die. He would be in a lot of pain but he could handle that. A laugh escaped his lips. All this for a woman going through the Burning. It was ridiculous.

Chanta's face came to his thoughts again. She had one of those faces that you never forgot, and he hadn't forgotten He didn't have to rack his brain when it came to her. He remembered. Eight years ago, he met her. Gyth had ordered a new sanctuary to be built in Kentucky and Payne had been placed there as a precautionary measure to ensure none of Damon's minions attacked. They hadn't, and Payne had gotten really bored, really fast.

He ran into her on a clear night. She was sitting under a green apple tree staring at the stars. As the memory resurfaced, the details of that night were crystal clear.

Wondering if she was a member of the One Race, he made his way to her. First, something rumbled from deep inside of him that sent goose bumps along his flesh. Second, every feral instinct he had sprang to life. And before he came to his senses, one word bounced around his thoughts:
Mine
.

To announce his arrival, he stepped on a dead branch. She jumped to her feet, her face a mixture of surprise and fear. It wasn't the reaction he had hoped for, but it was for the best.

“Who are you?” She stepped back looking around. “No one is supposed to be out here this time of night.”

He nodded, gave her a look he surmised would make her shake in herâ-he looked downâbare feet. “Are you from the sanctuary?”

Her mistrust pierced him for reasons he didn't understand. “Who are you?” she demanded.

She was wearing red and pink plaid pajamas, barefoot, and her blonde hair was braided. And she was pretty, too pretty to be on the outskirts of the shroud. She would make an easy target, an easy kill.

“You're the Destroyer Gyth has protecting us?” She attempted a half smile.

“Yes.” He stepped closer, and could smell her lemon and honeysuckle scent. “Why are you out here? Gyth ordered everyone to stay on sanctuary grounds.”

She looked up. “Watching the stars. And I'm not everyone. I play by my own rules.”

“Well, you just haul your star-gazing ass back to the sanctuary, okay?”

She squared her shoulders, bracing her hands on her hips, her eyes narrowing. “Don't talk down to me. Get off your high horse and stop trying to order me around.”

Pictures of Houses with Water Damage: Stories by Hemmingson, Michael
Heart of Darkness by Lauren Dane
House on Fire by William H. Foege
Missing May by Cynthia Rylant
Master of Bella Terra by Christina Hollis
Death of a Policeman by M. C. Beaton
Tea Leafing: A Novel by Macdonald, Weezie
Expect the Sunrise by Warren, Susan May
What Color Is Your Parachute? by Richard N. Bolles
No Light by Costello, Michael