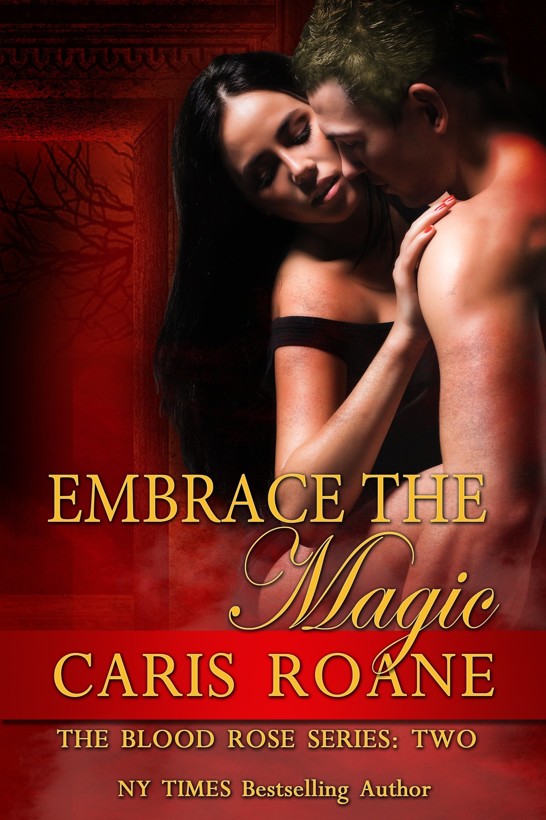 All rights reserved. No part of this eBook may be reproduced in whole or in part, scanned, photocopied, recorded, distributed in any printed or electronic form, or reproduced in any manner whatsoever, or by any information storage and retrieval system now known or hereafter invented, without express written permission of the publisher, except in the case of brief quotations embodied in critical articles and reviews.

This is a work of fiction. Names, characters, places, and incidents are products of the author's imagination or are used fictitiously. Any resemblance to actual events, locales, or persons living or dead is entirely coincidental.

EMBRACE THE MAGIC
is the second installment of my paranormal romance series, called the Blood Rose series, based on the question: what would happen if only one woman could satisfy the blood-starvation needs of a powerful master vampire? From there, I built a world called the Nine Realms, linked to earth through ‘realm access points’, attached to various North American cities, in this case, Shreveport, Louisiana.

A master vampire rules each of the realms and
EMBRACE THE MAGIC
follows the path of Mastyr Ethan as he meets his blood rose, in the form of Samantha Favreau, a woman who has no idea she’s half-fae, half-human.

I’ve enjoyed exploring and expanding the world of the Nine Realms, and in
EMBRACE THE MAGIC
I also asked the question: can guilt make it impossible for an individual to embrace love? Both Samantha and Ethan have reasons to feel guilty, but can they move beyond the past and reach for the future?

I hope you enjoy
EMBRACE THE MAGIC
, the sequel to
EMBRACE THE DARK
, which picks up three months after events that brought so much happiness to Mastyr Gerrod and Abigail. You’ll meet Vojalie and Davido again and of course, their new baby, Bernice! Enjoy!

To learn more about Caris Roane and to sign up for her newsletter go to
http://www.carisroane.com/

Mastyr Vampire Ethan stared down into Sweet Gorge where two of his Guardsmen hauled up a body on a sling carried between them. They flew side by side, matching their movements by long practice. The night air, though usually fresh in early April, carried a rancid edge, something he’d connected with this area for a long time.

But he’d lost another of his Guard here at Sweet Gorge, killed sometime this past week, but located by a search patrol just a half hour ago. And this was the fourth murder in a month.

Something was on the wind.

“Invictus?” Finn scratched behind his right ear. He was Ethan’s second-in-command, his long red hair a beacon in any situation.

Using both hands, Ethan shoved his own unruly hair away from his face. Sweat dripped from his forehead. The temp wasn’t too warm in Bergisson Realm this time of year, but when his blood-starvation reached difficult levels, he’d often perspire like he’d been battling for hours. “What the hell was Paul doing patrolling in this area?”

Ethan didn’t know Paul well, but he felt responsible for him, as he did for all his Guard. He’d built his force to three hundred strong, but Paul, as a new recruit, wasn’t well-known to many of the Guardsmen.

“He didn’t have orders to go out here, not with three other Guardsmen dead in the past few months along the eastern border.” Ethan let his gaze move from one end of the gorge to the other, then along the monolith to the east. A familiar heavy guilt clawed at his chest. This part of his realm was off-limits having been the place of a massacre forty years earlier.

“Maybe his body was dumped.”

There was a connection between Sweet Gorge and the Invictus. He just didn’t know what it was.

Sweet Gorge used to be a place of great beauty and had once been a modest resort, a place his family had been to a lot in its prime. Fae leadership had also met here often.

Now his mother, father and sister were gone, lost in the attack, along with many loved ones, over two hundred realm killed all at one time.

Afterward, the stream had dried up, the source cursed by a powerful fae of unknown ancestry. No one had seen the fae female or the deed, only that the stream was blocked and no amount of power had ever released it. A wall of crystals resided there and none of the fae he knew would go near it.

Besides, there was always the stench to warn realm-folk away, of something not right, very ancient, and deadly.

He glanced over the wooded ridgeline along the north ridge. A breeze picked up sending sharp pine scents through the air.

But something else struck his nostrils, the scent of dark fae magic, as though it waited there. His muscles flexed involuntarily along the insides of his arms. Yet in all these decades not a single fae of power, in any of the Nine Realms, had been able to figure out where all that power was coming from, not even Vojalie, the most powerful fae he knew.

He reset his long hair with the traditional woven clasp. He’d been flying through his realm for the past three hours, hunting the red wind of the Invictus, a sign that preceded an attack. He hadn’t found anything yet, but the night was young.

He’d used up a lot of precious energy, however, and he needed to feed again, the bane of his station as a true mastyr vampire. All the mastyrs he knew experienced desperate levels of blood-need and lately, for no reason he could figure out, his starvation had worsened.

His mouth filled with saliva as he drew his cell from the pocket of his battle leathers. He sent a quick text to one of his
doneuses
and wasn’t surprised at all when he got a message back to stop in for a quick tap. Bless the dozen women who serviced him.

Damn, he hurt, deep in his gut. He shifted away from Finn and took deep breaths as a couple of hard spasms pulled on his empty stomach once more.

As the two Guardsmen, levitating with the sling and the body between them, topped the ridge, Ethan stepped aside to give them room. Pines lined both sides of the gorge, trees like the ones in nearby Shreveport, Louisiana, the access point between his plane and the human world.

His realm had seen hard times for the past forty years and for all that time, he’d felt the weight of his realm on his shoulders, pressing down hard, just as it did on all the mastyrs, those nine vampires in charge of about a millions souls each.

Finn’s phone rang. He listened for a few seconds, then brushed sweat off his forehead with the back of his sleeve. “Shit. Well, that dumb-fuck’s been warned.”

Ethan stared at him. “Tom again?”

Finn put his phone away. “Yep. He’s at Club Prave.”

“Are you fucking kidding me?” Ethan knew exactly what Tom had been up to: Violating one of Ethan’s strict laws about how humans and realm-folk interact at a human-based event.

“No. I want to this time. That asshole has been warned long enough and now I’m locking him up.”

“Ethan, you’ve got better things to do than to police the human bars.”

“Not this time. Tom Brignall hides behind his cozy relationship with Ry. Time he learned who’s mastyr around here.”

“Then why the hell is he testing my laws and my authority?”

But Finn’s smile was crooked as he said, “Because he’s a vampire?”

At that, Ethan almost smiled as well. But the truth was harsher. Tom had a loyalty to Ry, and had caused dozens of problems in recent years because of it.

But Ethan’s other problem surfaced again, as his blood-starvation cramped him up again. He breathed through the pain wondering what the hell was going on with him. He’d never been quite this desperate where his blood-needs were concerned. And now, because of Tom’s breaking of the non-tapping law at human clubs, he wouldn’t have time to stop by his donor. But he’d make this quick, afterward get his blood craving slaked, or at least moved from critical to just slightly desperate, then jump back in the field.

He left orders for the Paul’s body to be taken to the morgue along with word that he’d check in to learn cause of death.

Before any of the men could so much as exchange a glance, or to complain again that he regularly took too much on his own shoulders, he headed south to Shreveport, levitating and flying quickly just a foot or so above the ground. He might have heard Finn grunting his frustration as he took off and he half-suspected Finn would find some excuse to follow in his wake.

Gerrod, the Mastyr of Merhaine Realm, had tried to warn Ethan that he needed to listen to his men more, to trust them more, but he was used to doing things his own way and his way was working just fine. So far, he’d kept the Invictus in check in Bergisson, and to-date, he had one of the lowest occurrence rates in all the Nine Realms.

Of course, reducing lost lives to a
tolerable statistic,
grated his nerves. There shouldn’t be any Invictus left to battle, but from the time the fighting pairs had come into existence several hundred years ago, there had simply been no way, at least not yet, for his world to get rid of them permanently. Some force resided behind the Invictus, maybe the same magic that had blocked the stream at Sweet Gorge. Mastyr Gerrod believed a vampire, known to the Invictus as the Great Mastyr, and bonded with a powerful ancient fae, was experimenting with the wraith-fighting-pairs, intent on some unknown long-term goal for the future of the Nine Realms.

But where either of these entities had come from, if they even existed, Ethan didn’t know, nor did any of the other realm rulers. Maybe this ancient fae had dammed up the waterfall and the stream, maybe she hadn’t.

He just had a terrible feeling that if he loosened his hold even a little, his Realm would see losses like never before.

Club Prave gave Samantha Favreau the creeps. From the time she’d arrived two hour ago, one vampire after another had leered at her, asking her to dance, especially the slow-dances.

She’d refused, of course, since in her opinion, vampires were just above slugs in terms of real earthly value.

But that was the point. They weren’t human. They were from a different plane entirely, one somehow attached to earth.

From the time the world of the Nine Realms had made itself known to the citizenry of mortal earth, and started opening up these border clubs, more and more humans had become acquainted with what were called generally
realm-folk.

She wouldn’t be here at all, but her sociology professor had suggested using the club as a basis for one of her papers this year. He’d also upped the stakes by giving double points for studying, then writing about any aspect of the realm-world so long as the research included at least three interviews with any of the species of Bergisson Realm.