Read Emil and the Detectives Online

Emil and the Detectives 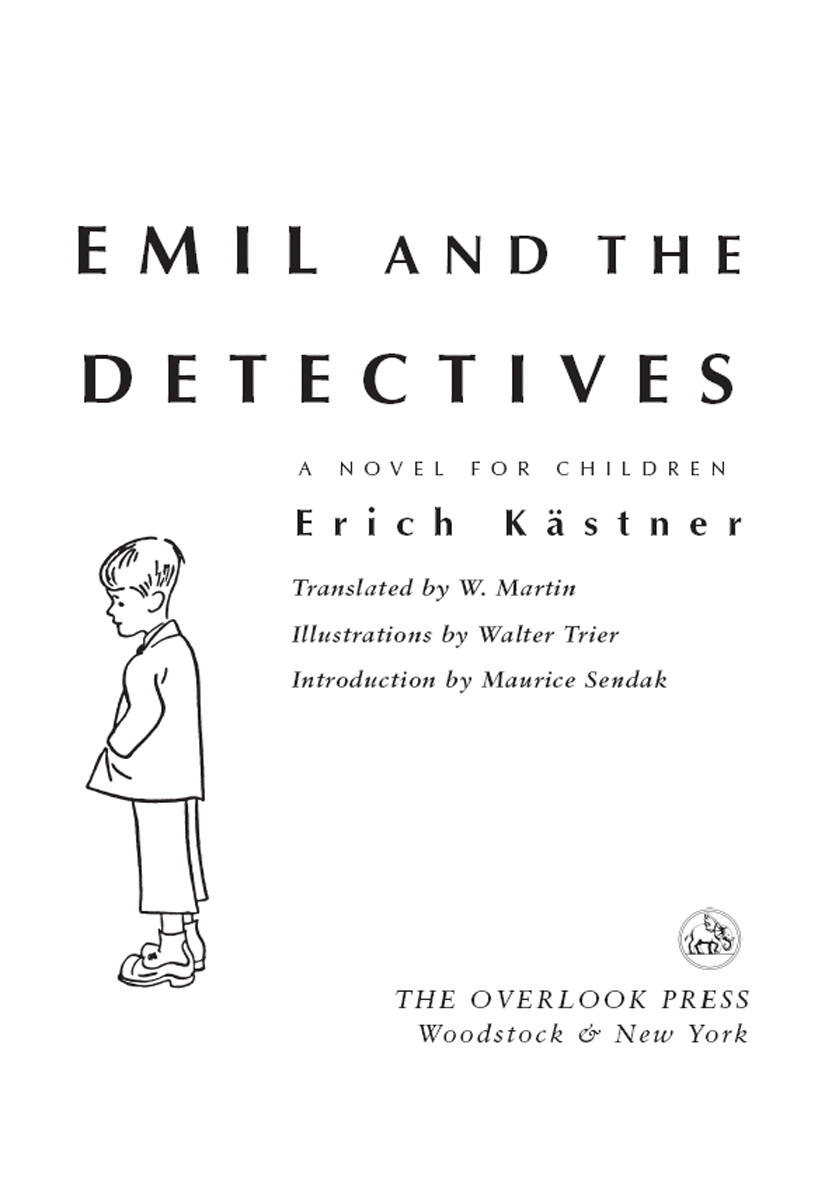 EMIL AND THE DETECTIVES 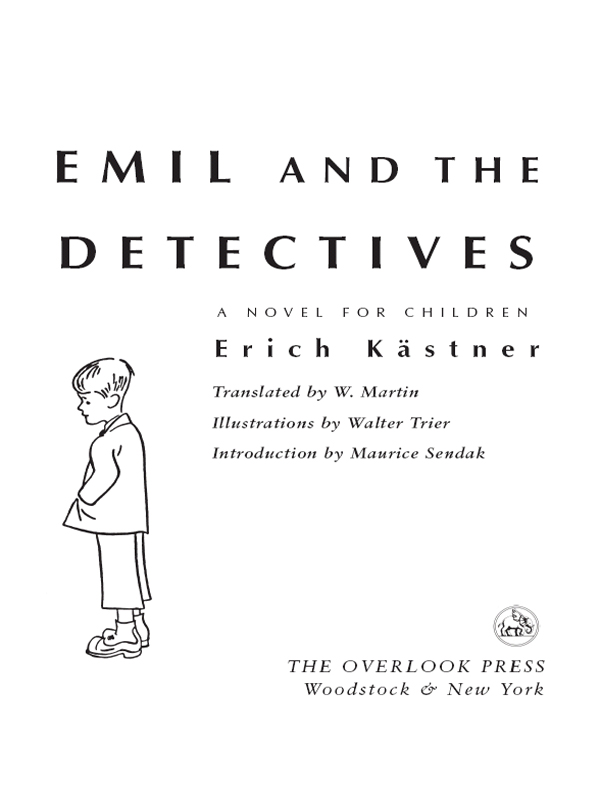 This edition was first published in the United States in 2007 by
The Overlook Press, Peter Mayer Publishers, Inc.
Woodstock & New York

Cataloging-in-Publication Datais available from the Library of Congress

F
IRST OF
A
LL
: EMIL HIMSELF

S
ECOND OF
A
LL
: MRS.TABLETOE THE HAIRDRESSER, EMIL'S MOM

T
HIRD OF
A
LL
: A PRETTY FANCY TRAIN COMPARTMENT

F
OURTH OF
A
LL
: THE MAN IN THE BOWLER HAT

F
IFTH OF
A
LL
: PONY THE HAT, EMIL'S COUSIN

S
IXTH OF
A
LL
: THE HOTEL ON NOLLENDORF SQUARE

S
EVENTH OF
A
LL
: THE BOY WITH THE BICYCLE HORN

E
IGHTH OF
A
LL
: THE BANK BRANCH OFFICE

T
ENTH OF
A
LL
: THE CASE ROOM OF A MAJOR NEWS PAPER

CHAPTER THREE
:
T
HE
T
RIP TO
B
ERLIN
C
AN
B
EGIN

CHAPTER EIGHTEEN
:
I
S
T
HERE A
M
ORAL TO THE
S
TORY
?

E
MIL IS A WONDER
â
WAS
A WONDER WHEN
I
FIRSTMADEHIS
acquaintance several years after he was published in America. I was about ten at the time. I don't remember other books from that period of my life, except, for special reasons,
Mickey Mouse in Pygmy Land
and
The Prince and the Pauper.
But the very title
Emil and the Detectives
conjures up for me a grab bag of delicious memories: the thrill of Emil's adventures; the vivid sense of the city of Berlin, where most of the action takes place; the story's real danger and playful comedy and total lack of condescension. This wasn't “a boy's book” spoiled by a mincing writer endearing himself to a bunch of little quibblers. I've never forgotten that imagined smell of Berlin, or the city kids who help Emil out with his very serious problem, or the fascinating people, even eccentric people! Emil's cousin, Pony, forever on her bicycle, is still my favorite character.

Emil and the Detectives
was first published in Germany in 1929; an American edition followed the next year. I probably met up with Emil in 1938 and it was love at first sight. Erich KÃ¤stner's madcap mystery, with its intriguing title, had been presented to me by my sister, who was hopelessly hooked on books and wanted me and my brother to be equally addicted. This book was a golden object, only for me, my book. Since it had been chosen by my sister, it had to be something very worth reading, something different and new.

By 1938 the dread of war and all things German filled my family's life with despair. “On November 10, 1938,” as KÃ¤stner himself recorded, “gangs of men wearing black breeches, riding boots, and civilian jackets smashed Jewish store windows with iron rods.” This happened in Berlin,
Emil
's city, and is infamously memorialized as Crystal Night. Before that terrible event, in 1933, all of KÃ¤stner's books (except for
Emil
!!) were burned in a large square next to the Berlin opera house, the square crowded with approving onlookers. KÃ¤stner was there.

How could I read
Emil and the Detectives
without a heavy sense of guilt? But the book had, and still has, the opposite effect of making me feel part of Emil's little gang of boys, all of them out to help Emil find his stolen money. Here we see steadfastness, the loyalty of small children working together and achieving success by simply believing in each other. Here is the essence of boyhood, with all its endearing human quirkiness.

Emil
is a little masterpiece. It shows us the heroic nature of children, how they can stick together and accomplish wonders without the help of the inept grownups. What a marvelous gift! Read it and you will be happy.

It is very funny, too.

EMIL AND THE DETECTIVES
Â

F
IRST OF
A
LL

This is, first things being first, Emil himself. In his navyblue Sunday suit. He doesn't like wearing it, and only puts it on when he has to. Blue suits get stained so easily. And then Emil's mother dampens the clothes brush, clamps her son between her knees, and brushes him down, all the while scolding him, “Emil, Emil! You know perfectly well I can't afford to get you another suit.” And once again he remembersâtoo lateâhow she works all day to put food on the table and so he can go to school. 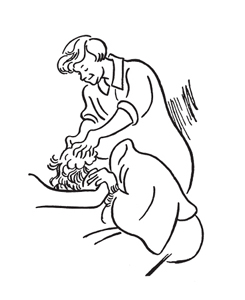 S
ECOND OF
A
LL

When Emil was five years old, his father, Mr. Tabletoe, the master plumber, passed away. Since then, Mrs. Tabletoe cuts hair. And gives perms. And washes the hair of the neighborhood housewives and salesclerks. Besides that, she has to cook, keep the house clean, and take care of all the laundry all by herself. She loves Emil more than anything, and she's glad she can work and make money. Sometimes she sings funny songs. Sometimes she gets sick, and then Emil makes fried eggs sunnyside-up for her. That's something he's good at. He can cook hamburger, too. With softened bread and onion. 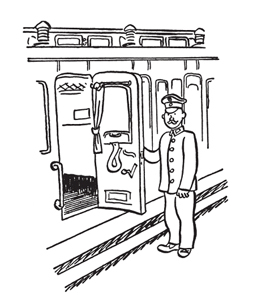 Undying Destiny by Jessica Lee
Goblins and Ghosties by Maggie Pearson
The Story of My Teeth by Valeria Luiselli
Aunt Dimity's Death by Nancy Atherton
The Bee Charmer (Sweet Treat Series Book 2) by Jamallah Bergman
Download My Love by Eva Lefoy
A Touch of Autumn by Hunter, Evie
Blind Salvage by Shannon Mayer
Under the Bridge by Michael Harmon
Wild Submission by Roxy Sloane