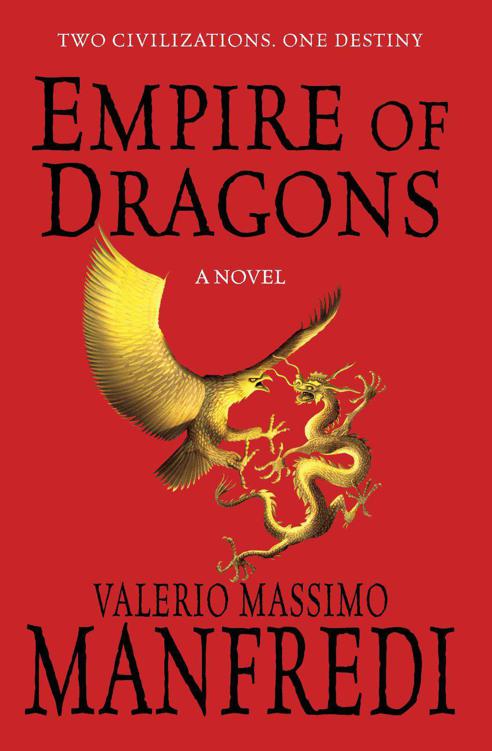 Translated from the Italian by Christine Feddersen-Manfredi

T
HE RAYS OF THE DAWNING SUN
bathed the peaks of the Taurus mountains. The snowy pinnacles took on a rosy hue and glittered like gems over the shadowy valley. The mantle of light spread slowly over the ridges and slopes of the great mountain chain, awakening the forests from their slumber.

The falcon was first to soar up to hail the sun, and his shrill cry echoed amid the rocky cliffs and crags, and down the steep sides of the ravine through which the foaming Korsotes flowed, swollen by the melting snows.

Shapur I of Persia, the King of Kings, of Persians and non-Persians, the lord of the four corners of the earth, was startled by that cry and raised his eyes to behold the wheeling flight of the prince of heights, then turned to the splendidly outfitted Arab thoroughbred his squire had just brought to him. A servant knelt so the king could plant a foot on his bended knee and vault into the saddle. Two more servants held out Shapur’s bow and golden-sheathed scimitar, and a standard-bearer took position at his side with the royal ensign: a long flag of red silk bearing the image of Ahura Mazda in gold.

His officers awaited him at the centre of the camp, armed to the hilt, astride horses mantled with precious caparisons, their breasts protected by steel plates. Ardavasd, the supreme commander, greeted him with a deep bow, as did all the others. At a gesture from the king, he touched his horse’s belly with his heels and set off. All the other officers fanned out to the right and left of Shapur and together they began to descend the hill.

The sun’s light had poured into the valley and touched upon the towers of Edessa, perched high on the barren upland, swept by the winds of the desert.

T
HE LONG
, persistent crowing of a cock greeted the rising sun.

In the courtyard of his house, Marcus Metellus Aquila, legate of the Second Augusta Legion, was already dressed and wearing his armour.

A native of southern Italy, Metellus’s bones and muscles had been toughened by long service on all the frontiers of the empire. Years of shouting out orders on the battlefield had made his voice deep and husky and blunted his manner of speaking. His high cheekbones, strong jaw and straight nose gave away his aristocratic lineage, but the simple, unrefined cut of his hair and beard, never completely tamed by a razor, revealed the austerity of a soldier inured to toil and trouble. The amber colour of his eyes and the rapacious intensity of his expression on the eve of a battle made him known to all the divisions south of the Taurus simply as ‘Commander Aquila’, evoking the proud eagle that his surname signified.

He was just hooking his
gladius
to his belt: obsolete as a weapon, but a legacy from his ancestors that he refused to hang on the wall and replace with a regulation sword. He even kept another hooked to the saddle of his horse, and was famous for saying that with the two of them, he could take out the longest blade.

‘A cock’s crow in a besieged city is a good sign,’ he mused as an attendant fitted the red cloak which denoted his rank around his shoulders. ‘If he’s survived the hunger we’ve suffered around here, we’ll survive as well.’ Metellus approached the shrine of his
lares
and left an offering to the shades of his ancestors, a little one, but even more precious in a period of such penury – a handful of spelt flour – then he prepared to leave.

His wife’s voice stopped him: ‘Marcus.’

‘Clelia. What are you doing up so early?’

‘You were going to leave without saying goodbye?’

‘I didn’t want to wake you. You had such a restless night.’

‘I’m worried. Is it true that the emperor wants to meet with the Persian?’

Marcus Metellus broke into a smile. ‘It’s incredible how women always seem to know the news we try to keep most secret.’

Clelia had to smile as well. ‘The emperor has a wife, who has ladies-in-waiting, who have friends . . .’

‘He says that peace is well worth risking his life for.’

‘What about you? Can’t you do anything to dissuade him?’

‘I’ll speak up if he asks for my opinion, and in that case I’ll try to make him change his mind. But once he’s decided, my place is at his side.’

‘Maybe he’s just hoping to gain time. Gallienus is in Antioch. In a few days of forced marches he could be here with four legions and lift the siege.’ He lifted her chin and saw that her eyes were full of tears. ‘Clelia . . . crying as you say goodbye to your husband brings bad luck, you know.’

Clelia tried to dry her eyes. At that very instant they heard the patter of little feet rushing down the stairs and a voice call out, ‘Father! Father!’

‘Titus! What are you doing here? Go right back to bed!’

‘You promised that you’d take me with you to the
palaestra
today.’

Metellus knelt and looked his little boy in the eye. ‘The emperor has called me. He’s the father of us all, my son, and when he calls we must run to his side. Go back to bed now and try to sleep.’

The child’s expression was suddenly serious. ‘You’ll go away with the emperor and leave me alone.’

Metellus frowned. ‘What are you saying? I’ll be back, you can be sure of it. I promise I’ll be back before nightfall. And you know that a Roman always keeps his word.’ He gave his tearful wife a kiss and left the house.

Outside in the street, waiting on either side of the door, were his two adjutants, centurions Aelius Quadratus and Sergius Balbus. The first was Italian, from Privernum. The second Spanish, from Saragoza. Both of their faces were scored by time and the many battles fought in every corner of the empire: rocky faces with thick eyebrows and bristly beards. Quadratus wore his hair very short and was balding at the temples; he was tall and heavily built. Balbus was shorter and darker-skinned, but his eyes were blue and his crushed nose gave away his passion for boxing.

Metellus put on his helmet, tied the laces under his chin, gave them a look and said, ‘Let’s go.’

They walked down the silent, still-deserted streets of the city with a steady step, each absorbed in his own thoughts, each with a heavy heart.

The cock’s crow resounded again and sunlight flooded the street, making the basalt slabs sparkle and lengthening the men’s shadows all the way back to the walls of the houses behind them.

At a crossroads they met another small group of officers, who had obviously been summoned by the emperor as well.

‘
Salve
, Marcus Metellus,’ he was greeted in return.

They continued together to the forum and then walked across to command headquarters. From there they could see the sentry walk up on the battlements. It was time for the changing of the guard: cadenced steps, the metallic clanging of javelins against shields. Salutes given, curt orders barked out.

‘The last guards are going off duty,’ observed Metellus.

‘For today,’ Domitius corrected him.

‘For today,’ amended Metellus, remembering how superstitious his friend could be.

They reached the entrance to the headquarters, where they were met by Cassius Silva, commander of the fortress, messmate and companion-in-arms of many years’ standing of Gallienus, the emperor’s son.

The praetorians on duty presented arms as the three legates passed and accompanied them inside. The centurions and other officers remained outside.

E
MPEROR
L
ICINIUS
V
ALERIAN
greeted them personally. He was fully armed and got straight to the point. ‘I wish to tell you that I’ve decided to go to the meeting with Shapur. Last night, a squad of about fifty of our men was dispatched to the right bank of the Korsotes in no man’s land. A garrison of Persian horsemen is posted on the other side of the river to guard the territory where the meeting is to take place.

‘As you can see, nothing has been left to chance. Our plenipotentiaries have already established the points of negotiation in order to simplify matters.

‘Shapur seems willing to discuss ending his siege on Edessa, despite the city’s importance as a geographical and commercial nexus between Anatolia and Syria. In exchange he wants a general agreement that redefines the relationship between our two empires and establishes lasting peace. He may ask us to give up some territory in Adiabene and Commagene, without precluding anything. He is open to negotiation. The terms seem good, and I’m ready to go.’

Lucius Domitius Aurelian had been frowning from the start and squeezing the hilt of his sword. He was a formidable soldier: having fought in numerous campaigns, he had killed nearly nine hundred enemies with his own hand, carving a notch into the shaft of his javelin each time. He was so quick at unsheathing his sword that he had earned the name
manus ad ferrum
among his men: ‘Sword-in-Hand’. He asked to speak. ‘I’ve heard that your son Gallienus is in Antioch, and could be here with four legions in five days’ time. Why run this risk now?’

‘Because we have enough food for two,’ retorted Silva.

‘We can ration supplies and make them last. A little hunger never killed anybody.’

‘It’s not just a question of food,’ replied the emperor. ‘We can’t be certain that Gallienus will arrive, or that it will take him only five days. Our informers tell us that there are Persian cavalry units all along the road from Antioch charged with interrupting our lines of communication and cutting off supplies. No. I will go to meet Shapur. To learn his intentions, if nothing else. If we can lay the foundations of a lasting agreement, all the better. But even if I succeed merely in gaining time and avoiding a large-scale attack while we wait for Gallienus to get here, that will be an achievement on its own. And the fact that it was Shapur who requested the meeting bodes well in any case.’

He turned to Metellus. ‘Have you nothing to say, Marcus Metellus? What is your opinion?’

Valerian looked at him more in surprise than concern. ‘Why?’

‘I’ve taken every precaution. We’re meeting on neutral ground, on open terrain. Fifty escorts on both sides, already in place. Nothing can happen. I’m going, I’ve already decided. And I don’t want Shapur to think that the emperor of the Romans is afraid of him.’

He strode out, followed by the other officers.

Metellus fell into step beside him. ‘Then I’m going with you, Caesar.’

‘No,’ replied the emperor. ‘It’s better that you remain here.’ He leaned close enough to speak into his ear. ‘I want to be sure I’ll find the gate open when I come back.’

‘Leave Lucius Domitius. He’s the most loyal man I know, he enjoys great popularity among the ranks and he’s found himself in such situations before. I’ll be more useful to you out there.’

THE BILLIONAIRE'S BABY (A Secret Baby Romance) by Mia Carson
An Anthropologist on Mars (1995) by Oliver Sacks
Scenes From Early Life by Philip Hensher
That Day the Rabbi Left Town by Harry Kemelman
The Spirit of ST Louis by Charles A. Lindbergh
A Bookmarked Death by Judi Culbertson
The Secrets of Ice Cream Success by AD Hartley
The Spell Book Of Listen Taylor by Jaclyn Moriarty
Tahoe Blues by Lane, Aubree
Breaking Through the Waves by E. L. Todd, Kris Kendall