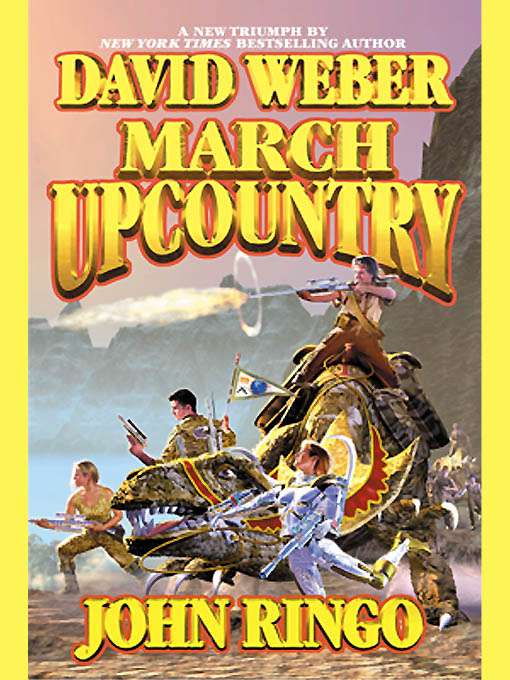 This book is dedicated to our mothers.

To Alice Louise Godard Weber,
who put up with me, taught me,
edited me, believed in me,
and encouraged me to believe I could
be a writer . . .
despite all evidence to the contrary.
I love you. There. I said it.
To Jane M. Ringo,
for dragging me to places I didn't want to go
and trying to make me eat stuff that would
turn a monkey's stomach.
Thanks Mom.
You were right.

More than Honor
Worlds of Honor
Changer of Worlds

Path of the Fury

Oath of Swords
The War God's Own

A Hymn Before Battle
Gust Front
When the Devil Dances

Prince Roger maintained his habitual, slightly bored smile as he padded through the door, then stopped and glanced around the room as he shot the cuffs of his shirt and adjusted his cravat. Both were made from Diablo spider-silk, the softest and sleekest material in the galaxy. Since it was protected by giant, acid-spitting spiders, it was also the most expensive.

For his part, Amos Stephens paid as little attention as possible to the young fop he had so grandly announced. The child was a disgrace to the honorable name of his mother's family. The cravat was bad enough, and the brightly patterned brocade jacket, more appropriate for a bordello than a meeting with the Empress of Man, was worse. But the hair! Stephens had served twenty years in Her Majesty's Navy before entering the Palace Service Corps. The only difference between his years in the Navy and his years in the Palace was the way his close-cropped curls had shifted from midnight black to silver. The mere sight of the butt-length golden hair of the farcical dandy Empress Alexandra's younger son had become always drove the old butler absolutely mad.

The Empress' office was remarkably small and spare, with a broad desk no larger than that of a middle-level manager in any of the star-spanning corporations of Earth. The appointments were simple but elegant; the chairs sensible, but elaborately hand-crafted and covered in exquisite hand-stitching. Most of the pictures were old master originals. The one exception was the most famous. "The Empress in Waiting" was a painting from life of Miranda MacClintock during the "Dagger Years," and the artist, Trachsler, had captured his subject perfectly. Her eyes were open and smiling, showing the world the image of an ingenuous Terran subject. A loyal upholder of the Dagger Lords. In other words, a filthy collaborator. But if you stared at the painting long enough, a chill crept over your skin and the eyes slowly changed. To the eyes of a predator.

Roger spared the painting one bare glance, then looked away. All of the MacClintocks lived under the shadow of the old biddy, long dead though she was. As the merest—and least satisfactory—slip of that lineage, he had all the shadows he could stand.

Unlike her flamboyant son, Empress Alexandra wore a blue suit of such understated elegance that it must have cost as much as a small starship. Now she leaned back in her float chair and propped her cheek on her hand, wondering for the hundredth time if this was the right decision. But there were a thousand other decisions awaiting her, all of them vital, and she'd spent all the time she intended to on this one.

"Mother," Roger said insouciantly, with a micrometric bow, and glanced at his brother in the flanking chair. "To what do I owe the honor of being summoned into two such august presences?" he continued with a slight, knowing smirk.

John MacClintock gave his younger brother a thin smile and a nod. The galaxy-renowned diplomat was dressed in a conservative suit of blue worsted, with a practical damask handkerchief poking out of one sleeve. For all that he looked like a doltish banker, his poker face and sleepy eyes hid a mind as insightful as any in the known worlds. And despite the developing paunch of middle-age, he could have become a professional golfer . . . if the job of Heir Apparent had allowed the time for it.

The Empress leaned forward abruptly and fixed her youngest with a laser stare. "Roger, We are sending you off-planet on a 'show the flag' mission."

"The planet Leviathan is celebrating Net-Hauling in two months—"

"Oh, my God, Mother!" Roger's exclamation cut the Empress of Man off in mid-sentence. "You must be joking!"

"We are not joking, Roger," Alexandra said severely. "Leviathan's primary export may be grumbly oil, but that doesn't change the fact that it's a focal planet in the Sagittarius sector. And there hasn't been a family representative for Net-Hauling in two decades."
Since I repudiated your father
, she didn't bother to add.

"But, Mother! The smell!" the prince protested, shaking his head to toss an errant strand of hair out of his eyes. He knew he was whining and hated it, but the alternative was smelling grumbly oil for at least several weeks on the planet. And even after he escaped Leviathan, it would take several more weeks for Kostas to get the smell out of his clothes. The oil made a remarkable musk base; in fact, it was in the cologne he was wearing at the moment. But in its raw form, it was the most noxious stuff in the galaxy.

"We don't care about the smell, Roger," snapped the Empress, "and neither should you! You will show the flag for the dynasty, and you will show Our subjects that We care enough about their reaffirmation of alliance to the Empire to send one of Our children. Is that understood?"

The young prince drew himself up to his full hundred ninety-five centimeters and gathered the shreds of his dignity.

Alexandra's steely gaze held him for a few moments more, and then she waggled her fingers in the direction of the door.

Prince Roger gave another micrometric bow, turned his back quite deliberately, and stalked out of the room.

"You could have handled that better, Mother," John said quietly, after the door had closed on the angry young man.

"Yes, I could have." She sighed, steepling her fingers under her chin. "And I should have, damn it. But he looks too much like his father!"

"But he
isn't
his father, Mother," John said quietly. "Unless you create his father in him. Or drive him into New Madrid's camp."

"Try to teach me to suck eggs, why don't you?" she snapped, then inhaled deeply and shook her head. "I'm sorry, John. You're right. You're always right." She smiled ruefully at her older son. "I'm just not good at personal, am I?"

"You were fine with Alex and me," John replied. "But Roger's carrying a lot of loads. It might be time to cut him some slack."

"There isn't any slack to cut! Not now!"

"There's some. More than he's gotten in the last several years, anyway. Alex and I always knew you loved us," he pointed out quietly. "Roger's never been absolutely sure."

"Undo some of the damage?" John's voice was level, his mild eyes unchallenging, open and calm. But then, he looked that way in the face of war.

"Explain," she said sharply. "Tell him the whole story. From the horse's mouth. Maybe if I explain it to him it will make more sense." She paused, and her face hardened. "And if he still is in New Madrid's camp, well, we'll just have to deal with that as it comes."

"But until then?" John met her half-angry, half-saddened gaze levelly.

"Until then we stay the course. And get him as far out of the line of fire as possible."

And as far from power as possible, as well, she thought.

Well, at least he's an athlete.
Watching the prince drift out of the free-fall and flip to a lithe touchdown on the padded landing area, Company Sergeant Major Eva Kosutic had to admit that she'd seen experienced spacers handle the maneuver worse.
Now if he'd only grow a spine.

First Platoon of Bravo Company, Bronze Battalion, The Empress' Own Regiment, was drawn up at attention in serried ranks on the forward side of the shuttle boat bay. The platoon's turnout was better than the Fleet's, which was only to be expected. The Bronze Battalion might be the "lowest" in the hierarchy of The Empress' Own, but they were still among the most elite bodyguards in the known universe. And that meant both the deadliest
and
the best looking.

It was Eva Kosutic's job to make sure of that. The thirty-minute Guard Mount had been, as always, precise and painstaking. Every centimeter of the uniform, equipment, and toilette of the individual Marines had been minutely inspected. In the five months she'd been Sergeant Major of Bravo Company, Captain Pahner had never found a single fault after she'd checked over the troops. And he never would, if Eva Kosutic had anything to say about it.

Admittedly, there were very few "gigs" for her to find. Before winning assignment to "The Regiment" all candidates went through an exhausting washout course. The five-week Regimental In-Processing, or RIP, was designed to remove the wannabes and combined all the worst aspects of commando training with intense inspections of uniform and equipment. Any Marine found wanting—and most were—was sent back to his unit with no hard feelings. It was understood that "The Regiment" accepted only the best of the best of the best.

Once a recruit survived RIP, of course, he found another hierarchy to deal with. Almost all of the recent "Rippers" were assigned to Bronze Battalion, where they had the inexpressible joy of guarding an overbred pansy who'd rather spit on them than give them the time of day. Most of them suspected that it was just another test. If they stayed hardcore and professional for eighteen months, they could either take a promotion to stay in Bronze or else vie for a position in Steel Battalion and protect Princess Alexandra.

Personally, Eva Kosutic was counting down. One hundred and fifty-three days and a wake-up, she thought, as the prince stepped off the landing mat.

The last notes of the Imperial Anthem died, and the ship's captain stepped forward and saluted.

"Your Royal Highness, Captain Vil Krasnitsky, at your service! Might I say what an honor it is to have you with us on the
Charles DeGlopper
!"

The prince gave the ship's captain a languid one-handed wave, and turned to look around the boat bay. The petite brunette who'd trailed him out of the tube stepped forward and around him with an almost unnoticeable flare of her nostrils and took the captain's hand.

The Voices of Heaven by Frederik Pohl
Wild Hunts by Rhea Regale
The Red Queen by Meg Xuemei X
New Title 3 by Poeltl, Michael
By Summer's End (Christian Fiction) by Naramore, Rosemarie
The Light at the End by John Skipp, Craig Spector
The Playboy's Baby: A BWWM Pregnancy Romance by Blue, Tasha
Take a Thief by Mercedes Lackey
Hidden Bodies by Caroline Kepnes
About This Life: Journeys on the Threshold of Memory by Barry Lopez