Read Empire of the Sikhs Online

Empire of the Sikhs 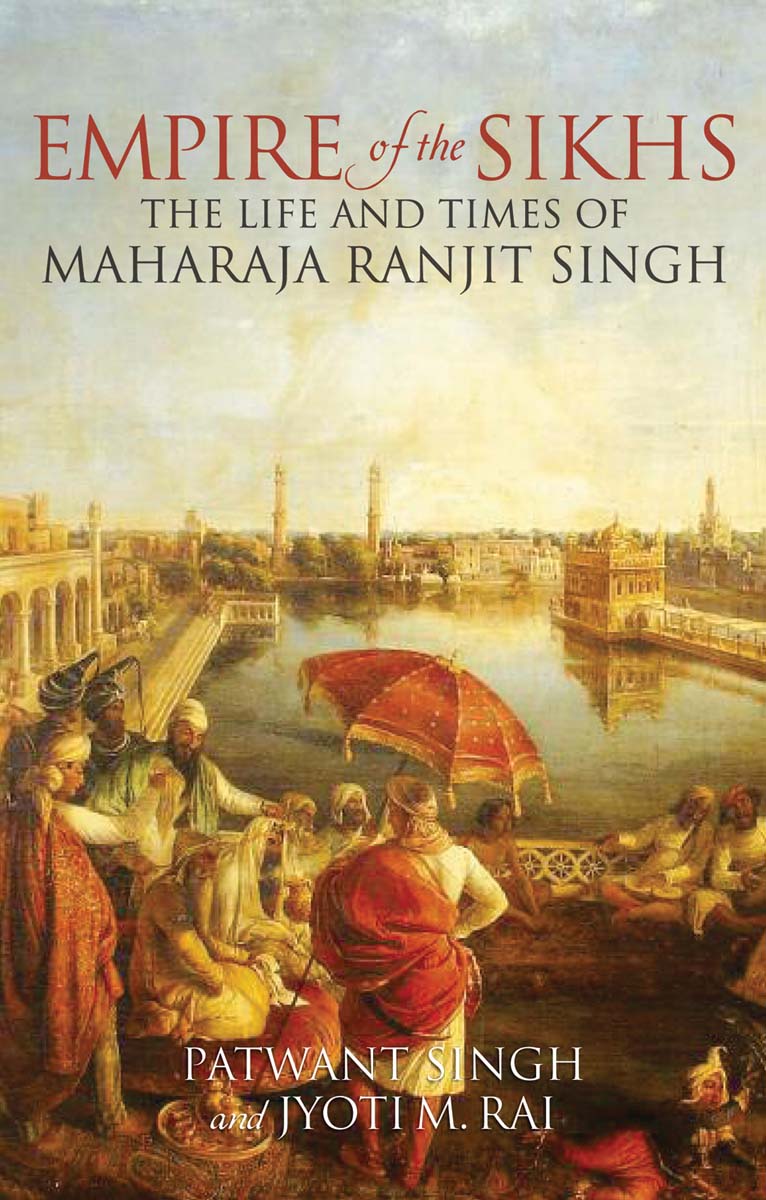 âEmpire of the Sikhs
tells a fascinating story of humanity in an age of inhumanity.'

âThis book breaks through the barrier between the Sikh world and beyond.'

R
ANJIT SINGH
(1780-1839)
HAS BEEN LARGELY WRITTEN OUT
of accounts of India's past by British historians. Yet he was one of the most powerful and charismatic figures in Indian history. He unified the warring chiefdoms of the Punjab into an extraordinary northern empire stretching to the borders of Kabul and Tibet, built up a formidable army, kept the British in check to the south of his realm, and closed the Khyber Pass through which plunderers had for centuries poured into India. His rule provided the north with a political and cultural landscape more integrated and relaxed than any to be found elsewhere in the subcontinent before or since.

His consummate humanity was unique among empire-builders. He gave employment to defeated foes, honoured faiths other than his own, and included Hindus and Muslims among his ministers. He was a colourful character. Inspired by the principles of peaceful coexistence uniquely articulated by the Sikh Gurus and firm in upholding the rights of others, he was unabashed in exercising his own. His court was renowned for its splendour; he had around twenty wives, kept a regiment of âAmazons' and possessed a stable of thousands of horses. On ceremonial occasions he would wear the Koh-i-noor.

The authors of this first full-length biography in English make use of a variety of eyewitness accounts, from reports by Maratha spies at the Lahore Durbar to British parliamentary papers and travel accounts. The story ends with the controversial Anglo-Sikh Wars following Ranjit's death, which saw the fall of his empire in the hands of successors whose internecine conflict was exploited by the British.

The 300th anniversary of the consecration of the Sikh holy scriptures with which the publication of this book coincides is a fitting moment for a long overdue appraisal of a figure who contributed so much to Sikh history and made Amritsar's Golden Temple one of the greatest religious pilgrimage sites in the world.

PATWANT SINGH was born in Delhi in 1925. On leaving school he worked in the family construction firm, which helped build Lutyens' New Delhi in the 1930s. In 1957 he founded the influential magazine
Design,
devoted to architecture and wider aesthetic concerns, which he published and edited in Bombay and later New Delhi for thirty-two years. He is well known both in and outside India for his books and articles on India, international affairs and the environment. His books include
India and the Future of Asia
(Knopf; Faber and Faber, 1967),
The Struggle for Power in Asia
(Hutchinson, 1971; French edition
Le Jeu des Puissances,
AndrÃ© GÃ©rard-Marabout, 1974);
The Golden Temple
(Time Books International, 1989),
Gurdwaras in India and around the World
(Himalayan Books, 1992),
Of Dreams and Demons: An Indian Memoir
(Duckworth, 1994; Kodansha America, 2005),
Garland Around my Neck: The Story of Puran Singh of Pingalwara
(UBSPD, 2001),
The Sikhs
(John Murray; Knopf; Random House, 1999),
The World According to Washington
(UGI Perspectives, 2004; Common Courage Press, 2005), and
The Second Partition: Fault-Lines in India's Democracy
(Hay House, 2007). His articles have appeared in the
New York Times,
the Toronto
Globe and Mail,
the London
Independent
and a number of leading Indian newspapers.

JYOTI M. RAI, from a distinguished Maratha family, was educated in London and New Delhi. She is married to a Sikh. From 1980 to 2000 she lived and worked in New York, becoming a numismatist of international reputation. On the American Numismatic Society's Standing Committee for Central and South Asian Coins for many years, she assessed, catalogued and researched their collection and was instrumental in making the Sikh collection one of the world's finest. She has also built up an important personal collection of Sikh coins, with related rare books and historical documents. She has published a number of papers in Indian journals and the journal of the Oriental Numismatic Society, UK. She is Vice-President of the Delhi Coin Society. 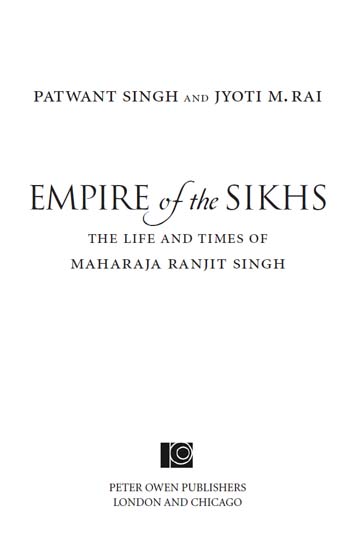 For Pritam Singh Chahil, an extraordinarily gifted scholar and exemplar of Sikh values, Champa, his lifelong inspiration, and Satjiv, a cherished friend

1 The Legacy That Made the Sikhs Proud

2 Drumbeat of a School Drop-out

3 Emergence of the Sikh Kingdom

6 Patron of the Arts and Minter Extraordinary

8 The Decadent and Deceitful

9 Twilight of an Empire

The Gurus and the Harmandir Sahib or Golden Temple (woodcuts,
c.
1870)

Mirror and gold-trimmed work in the Harmandir Sahib

Ranjit Singh on horseback against the city of Lahore (woodcut,
c.
1870; detail)

Diamonds worn by him as an armlet

Bridging the River Chenab
(oil on canvas by Charles Hardinge)

Governor-General Viscount Hardinge, His Two Sons and Colonel Wood on the Battlefield of Ferozeshahr
(oil on canvas by Sir Francis Grant)

Maharaja Dalip Singh (engraving after a photograph by O.G. Rajlander)

Silver rupee, the first coin minted by the
misls
in Lahore

Silver rupee struck in Lahore in 1801

Coin minted by Hari Singh Nalwa, governor of Kashmir, in 1822

Nanakshahi minted at Amritsar shortly before the British annexation of Punjab

The Harmandir Sahib today; detail of inlay work in marble in the Temple )

The Sikh Heartland in the Seventeenth and Eighteenth Centuries

The Territories in the Kingdom of Maaja Ranjit Singh

The Sikh Empire in 1839, with Cis-Sutlej Towns

The Dismantling of the Sikh Empire in the 1840s

More often than not, to undertake to write a book is far easier than actually to write it. But it is rare so thoroughly to enjoy a task after reluctantly agreeing to do it that an unexpected sense of loss sets in as the work nears its end, and all the vital, valorous, colourful, conspiring, violent and wilful persons whom we encountered in it every day are no longer around. So we cannot thank our friend enough who wishes to remain nameless but who compelled us to write this book. The very idea of writing about a larger-than-life figure like Ranjit Singh was in fact a challenging and alluring prospect that was difficult to turn down. So, in the end, although it took time to finish the biography of this very exceptional man, it was more than worth it.

Our understanding of his true genius was made possible by knowledgeable men and women and those many friends who generously shared their insights with us. Some, alas, are no more, and the one among them who stood out for his intellect and impressive scholarship was Lieutenant General Joginder (Jogi) Singh Dhillon. Ranjit Singh's life and times were one of Jogi's fields of interest, and he had the ability to cut incisively through accounts of him that were hyperbolic, churlish, inaccurate, or which failed to gauge his real worth. His analysis was stimulating, instructive and inspiring, because of his endorsement â as an outstanding soldier himself â of Ranjit Singh's military genius. Jogi also had a knack for analysing and exposing the extent to which the colonial
powers would go to achieve their imperial goals. Their misdeeds come through with startling clarity in the later stages of this book. The East India Company's subversive strategies against the Sikh empire after Ranjit Singh's death were base beyond belief; especially since few colonial powers in their heyday have so persistently proclaimed their own virtues as the British have. Nobody could dismantle their specious and deceptive arguments as convincingly as Jogi could. It was his conviction that nations conspire at events and no level is too low to stoop to for achieving their ends, no lie too outrageous if it serves the larger national interest. As George Bernard Shaw said: âYou will never find an Englishman in the wrong.'

Growing New Plants by Jennifer Colby
The Fire Artist by Whitney, Daisy
Lady Lavender by Lynna Banning
What's Important Is Feeling: Stories by Wilson, Adam
Vivian In Red by Kristina Riggle
Soul Sucker by Pearce, Kate
Jack Pierce - The Man Behind the Monsters by Essman, Scott
The Handmaid and the Carpenter by Elizabeth Berg
She's Asking for It! by Eve Kingsley
The Shallows by Nicholas Carr