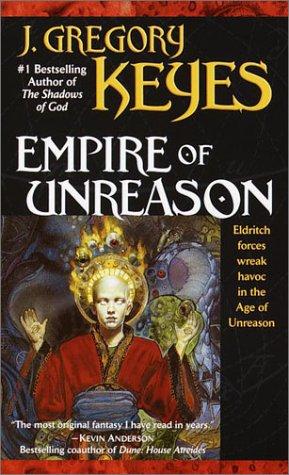 Book Three of
The Age of Unreason

Sale of this book without a front cover may be unauthorized. If this book is coverless, it may have been reported to the publisher as “unsold or destroyed”

and neither the author nor the publisher may have received payment for it.

This book contains an excerpt from the forthcoming hardcover edition of
The
Shadows of God
by J. Gregory Keyes. This excerpt has been specially set for this edition only and may not reflect the final content of the hardcover edition.

Published by The Ballantine Publishing Group

Excerpt from
The Shadows of God
by J. Gregory Keyes copyright © 2001 by J.

Conventions. Published in the United States by The Ballantine Publishing Group, a division of Random House, Inc., New York, and simultaneously in Canada by Random House of Canada Limited, Toronto.“

Del Rey is a registered trademark and the Del Rey colophon is a trademark of Random House, Inc.

1. A Matter of Gravity

2. A Question of China

Belated credits to Bob Kobres for his pointers on how to destroy London with an asteroid. Thanks to Steve Saffel, who had to jump on this boat in midstream, and in a pretty swift current. My appreciation to Kris Boldis, Ken Carleton, Professor Nell Keyes, and Nancy Landrum for reading. Thanks to Duane Wilkins of University Books in Seattle and Mary-Elizabeth Hart of Mysterious Galaxy in San Diego, not just for their dedication to science fiction and fantasy, but for their friendship. Finally, my thanks to Heather Ramsey, Tony Selto, Bill Nary, and everyone else at Salle Auriol Seattle for bruising my body but lightening my spirits.

His body closed like a fist, each muscle trying to tear free of bone. He snarled through his teeth, watched the angel with slitted eyes.

“You can still change your mind,” the angel said reasonably, “and obey me.” It EMPIRE OF UNREASON

raised its feathery wings. Its face, as always, was a mask of light.

Peter tasted blood in his mouth, but he managed to get the words out as he wanted, clear and measured. “I am Peter Alexeyevich! I am the tsar of Russia.

You cannot command me.”

“You are not. You are a betrayer and a liar.”

You were happy to tell
them
I was an angel.”

Peter scooted against the cabin wall and dug his hands into the deep pockets of his coat. His face, which often slipped his control, spasmed terribly. “What do you want?” he demanded. “What do you devils really want?”

“Only the one thing I asked. Have I ever asked for anything else? Any reward for my services?”

“It isn’t one thing. It’s everything. I
know
you now.”

“I doubt that. But, very well, if you insist on dying.”

Peter pulled something from his pocket—a small cube with a circular depression in the top. It was humming, a single clear note.

The angel paused. “What is that?”

“Something a friend gave me. A wise friend, as it turns out.” He placed a sphere the size of a musket ball in the depression, and a shriek cut through the fabric of the universe. Peter felt it in his bones. The angel felt it, too, and dripped fire into Peter’s veins, even as a wind came that tore it apart, each feather dissolving into a line of smoke.

The death of the angel did not stop the pain. A wave of agony crested over Peter’s head and dragged him under; and suddenly he had no weight at all, as if he were falling from a height with no end.

Red Shoes jerked awake to find himself already on his feet. He swayed there for a moment, trying to remember where he was, but the otherworld sight was still wrapped around him, making the trees, the earth he stood on, the stars themselves too strange to recognize.

He found his pipe and a pinch of Ancient Tobacco and lit it from an ember that had strayed from the remains of the fire. The warm, musky smoke strengthened the breath in him and curled from his nose. Gradually the world came clear.

He was Red Shoes, war prophet and miracle maker of the Choctaw people, and he stood on an earthen mound in the Natchez country, near the Great Water Road. The mound’s top was as broad as a village, and around it lay swamp, the underworld kissing the earth from beneath.

A soft cough came behind him, and he turned to regard Skin Eater.

Skin Eater was a Natchez man, a descendant of the Sun, his dark skin mottled with even darker tattoos, blurred by the eighty winters of his life.

“I felt it,” Skin Eater murmured. “Do you know what it was?”

“No,” Red Shoes admitted. “Something important, something strong. My shadowchildren died bringing it to me.”

“Yes. Since the strange news from the West began, I have sent my children out to watch. Now they have seen something.”

“I know. But my shadowchildren tell me no more than that. If only I knew
where
in the West…” Red Shoes trailed off, thinking.

Skin Eater reflected for a moment as he lit his own pipe. “You are more powerful than ever I was,” he said, “perhaps the strongest there has ever been.

But your people are younger than mine—there are things the Natchez remember that the Choctaw do not.”

“I acknowledge that, great-uncle.” It was a title of respect, only. He was not related to the old man.

Skin Eater swept his arms around. “This place is an image of the world—do you see? The deeps of the beginning times below and around us, the earth raised up with a face for each direction. The flat top here is the whole surface of the middle world. Like those paintings on paper the French use.”

“You mean a map? But maps have things marked on them. Rivers, mountains, towns—”

“But if a town should move, will it move on a French map? Not unless they draw another map, yes? Here, however, you have only to know how to look.

Here, the world can always be seen true.”

Red Shoes frowned slightly as the implications of the old man’s words sunk in.

He took another puff of his pipe, and began chanting, walking in widening circles upon the top of the mound, giving smoke to the directions. His feet sank back into the world of spirit, of dream.

As he walked, the appearance of the mound changed. Below his feet, plains, mountains, and forests appeared and vanished, as if, indeed, he walked on an enormous and incredibly detailed map. Excited now, he strode west, looking for what he had seen. He crossed the Great Water Road, which the English called Mississippi. He towered above thinning trees, and then there were no trees at all, only grass. There, at last, he found an obscure place he could not see, a patch of nothing on the image of the world. This was the thing, the place where his shadowchildren had heard the scream, felt the strange power.

“Did you find it?” Skin Eater asked.

“What ‘r’ y‘ two talking about when a man is trying’t’ sleep?” A voice grumbled from nearby. Red Shoes turned to regard a big, broad-faced, knob-nosed Englishman, sitting up in his blankets.

“Mornin‘?” The Englishman glared around at the darkness. “Mornin’ has
sunlight,
damn y’r In’yun soul.” He looked around again, this time more worriedly. “What’s got y‘ hup? Ghosts and ghoulies?”

“Something like that. How set were you on seeing New Paris?”

“Not anymore. I have to go someplace else.”

“Well,” Red Shoes began slowly, “now there is the problem…”

For it’s well known that bodies act one upon another by the attractions of
gravity, magnetism, and electricity; and these instances shew the tenor and
course of Nature, and make it not improbable but that there may be more
attractive forces than these.

A Matter of Gravity

Benjamin Franklin felt awfully pleased with himself as he rose from the polished oak table to face his audience. The meeting room in the upper story of the Egyptian Coffeehouse was suffused with milky sunlight that poured through high, wide windows, blending with arabesques of pipe smoke and ephemeral vapors from a dozen bowls of coffee. He felt as if he were addressing a Dutch painting—one he himself had commissioned.

He paused at a small bench, and made as if to pluck at the cloth that covered the squarish object that lay upon it; but instead, repressing a devilish grin, he turned toward the assembly and cleared his throat. Coffee bowls clinked and settled as ten men and two women regarded him expectantly. He summoned up his best orator’s voice.

“The opening questions of the Junto having been asked and answered, I now propose a modest demonstration. But first a query, my ladies and my gentlemen—and my otherwise— what is the most pressing problem of our day?”

“Get on with it, Mr. Franklin!” Shandy Tupman piped, in his reedy voice, shaking his fist in mock threat. “Han’t no schoolroom, this!”

Franklin arched his brows. “And how would you know what the inside of a schoolhouse looked like, Mr. Tupman?”

That drew a few snickers.

“Allow Mr. Franklin his glory, Mr. Tupman,” a beetle-browed fellow named Dawkins said. “It’s little enough of it he has, as it is.”

A contagious chuckle passed around the room at that, and Franklin kept his smile small: he was not the least well-known man in the British Commonwealth of America.

“Very gracious,” Franklin said. “And to my question?”

“My dear,” Franklin said, peering down his nose at her. “There’s no cure for that sort of man but a sensible wife.”

“Some cures take a lifetime to work, it seems,” she said back sweetly,

“especially when the patient is so deeply infected.”

Franklin smiled. “Well, it may be. But one good husband is worth two good wives.”

“And how do you reckon that, husband?” she said.

“Why, my dear Lenka, the scarcer something is, the greater its value.”

He waited for the laughter to die, then put on a more somber face. “Now. In all seriousness.”