Read Encyclopedia Brown and the Case of the Secret UFOs Online

Encyclopedia Brown and the Case of the Secret UFOs (2 page) 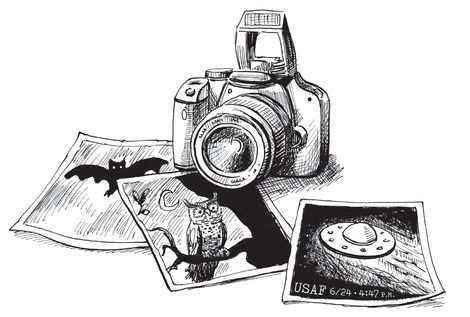 In the summer, Encyclopedia ran his own detective agency out of the family's garage. The Brown Detective Agency was well known throughout the town. Every morning, Encyclopedia Brown hung out his sign right after breakfast:

It usually didn't take long for a new client to appear.
This time it was Flash Borden who came running up. Flash was in fifth grade, like Encyclopedia. His real name was Gordon. He had left Gordon Borden behind in kindergarten. Flash, he had decided, suited him better.
He wasn't called Flash because he could run fast. The name had stuck to him because he was a big fan of flash photography. He liked to take pictures at night. Flash had the best collection of bat and owl photographs in Idaville. He was known for his patience and for not being afraid of the dark.
Flash stopped to catch his breath. “I d-don't have much time,” he gasped.
“Why not?” asked Encyclopedia. “Is someone chasing you?”
“No, no, not that.”
“Then what's wrong?” Encyclopedia asked. Flash took a deep breath. “I just don't want to be late. Bugs Meany is selling pictures of unidentified flying objects, and I want to buy one.”
Encyclopedia frowned. Bugs Meany was the leader of the gang of older boys, the Tigers. They should have been called the Shepherds. They were always trying to pull the wool over someone's eyes.
Encyclopedia spent a whole lot of his time stopping their attempts to take advantage of the kids of the neighborhood.
“Are you sure the pictures are real?” said Encyclopedia.
“No, I'm not,” Flash admitted. “Frankly, I'd give anything to be able to take a picture of a UFO myself. I don't even know how to look for a UFO. Having one of those pictures will be the next best thing.”
He plunked a quarter down on the empty gasoline can that Encyclopedia used as a counter. “I have to be careful not to buy a fake. Bugs's pictures are pretty expensive. That's why I want you to come with me.”
“Fair enough,” said Encyclopedia. “Let's go see if those pictures will fly.”
They found Bugs Meany outside the Tiger clubhouse, an empty toolshed behind Mr. Sweeny's Auto Body Shop. He had set up his pictures on a small table.
There were several shots of a flat round object sailing high in the air. The shots had been taken from different angles, though they all showed the same spaceshipâif that's what it was.
“Step right up,” said Bugs. “Buy yourself a genuine photograph of an unidentified flying object. Are aliens spying on us from outer space? Should we be worried or welcoming? You be the judge.”
Several kids were looking at the pictures.
“The spaceship is kind of blurry,” said one kid.
“Of course it is,” said Bugs. “Those aliens were not just standing around saying âCheese!' They were probably on a secret mission, traveling at hypersonic speed.”
“Hypersonic?” said another kid. “I've heard of supersonic, but what's hypersonic?”
“It's something we don't have,” Bugs explained. “I mean, the aliens have to be able to get here from some other planet, right? They can't do that using the kind of speed we have here on earth.”
He paused for effect. “They need something faster. That's what hypersonic is. Considering how fast their ships go, we're lucky to have any images of them at all.”
“I guess that makes sense,” said the first kid. “But how do we know these spaceships are real? They don't seem to have any weapons or antennas sticking out.”
“Of course not,” said Bugs. “That would not be aerodynamic. All those things are pulled in when they're not in use. The aliens don't want a bumpy ride while traveling millions of miles through space. I don't blame you for being suspicious.”
Bugs cleared his throat. “That's why we only got pictures that are clearly stamped USAF in the lower left corner. That stands for the United States Air Force. Now, it's one thing to accuse me of faking a picture. Man, oh, man, it would be unpatriotic to accuse the United States Air Force of doing that.”
Two of the Tigers stood up straight and saluted into space.
“No, no,” said the first kid. “I am patriotic! I was just asking to make sure.”
Bugs nodded. “Of course you were. Okay, who wants to collect a piece of history? Ten dollars apiece, that's all I'm asking.”
The kids moved forward for a closer look.
The Tiger leader was wound up, talking a mile a minute.
“Note that the picture even has the date and time it was taken: June twenty-fourth at 4:47 P.M.,” he declared. “You can't get more precise than that.”
Flash held up one of the pictures. The spaceship itself was a little blurry, but the date and time were perfectly clear.
“That proves it, right?” Flash whispered to Encyclopedia. “The pictures are just what Bugs says they are.”
Encyclopedia took a look for himself. “If any aliens were checking us out,” he said, “they weren't doing it from this spacecraft. This picture is a fake.”
Bugs looked shocked. “Are you accusing the United States Air Force of something underhanded?”
“Actually,” said Encyclopedia, “I'm doing just the opposite.”
Â
WHAT DID ENCYCLOPEDIA MEAN?
Â
Â
Â
Â
Â
Â
Â
(Turn to page 76 for the solution to “The Case of the Secret UFOs.”)
The Case of the Scrambled Eggs 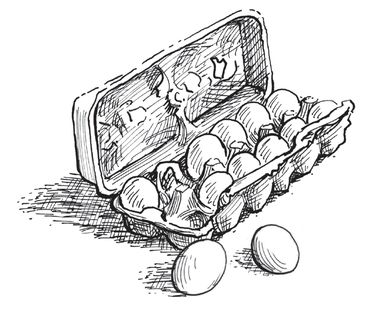 Bugs hated Encyclopedia. His plans to cheat the children of the neighborhood were always blocked by the boy detective.
Bugs dreamed of getting even. A good poke on the nose was worth trying. That is, until he thought of Sally Kimball.
Sally was Encyclopedia's junior partner in the Brown Detective Agency. She was also the best athlete in the fifth grade.
Bugs didn't care about any of that.
What he did care about was Sally's punching power. He felt it for the first time when she had defended a boy Bugs was bullying. She jabbed with a left to the nose, followed by a right to the belly.
Bugs made a crash landing in the grass. “Send in the cavalry,” he groaned.
Afterward he insisted she had caught him cold. He didn't have time to warm up.
“You have to watch out for Bugs,” Sally often reminded Encyclopedia.
“He's not happy about you, either,” Encyclopedia said.
A few minutes later, who should show up at the garage but Bugs himself. He was carefully carrying a carton of eggs. Sally immediately jumped to her feet.
“Now, now,” said Bugs, “there's no need to get excited. I came here to get some help.”
“You did?” said Sally.
“Really?” said Encyclopedia.
Bugs nodded. He took out a quarter and slapped it down on the gasoline can. “There! You see? It's official.”
“Tell me more,” said Encyclopedia.
“I want you to guard these eggs for me this morning,” Bugs said. “At one o'clock, meet me at the corner of Main and Elm Streets.”
“That's it?” said Encyclopedia.
“Yup,” Bugs said. “If you think you can handle it.”
“Why hire Encyclopedia?” asked Sally. “Why not use one of your Tigers? You're all in the same gang. Don't you trust them?”
“Of course I trust them,” said Bugs. “But they're all busy doing their homework or helping little old ladies across the street. I thought anybody with a problem was welcome here.”
“May I see the eggs?” asked Encyclopedia.
“Be my guest,” said Bugs. He opened the carton, which was filled with eggs. “Take a look.”
Encyclopedia took a look. The eggs seemed perfectly ordinary. He picked one up. It felt perfectly ordinary, too.
“I know what you're thinking,” said Bugs. “What's so special about these eggs? I'll tell you. It's personal, very personal. You don't need to know anything else to do the job. Will you help me or not?”
“Sure, Bugs,” said Encyclopedia. “You can depend on me.”
Bugs smiled broadly. “Great. I'll see you later. Remember, one o'clock. Don't be late.”
And off he went.
“I'll bet there's something rotten about these eggs,” said Sally.
Encyclopedia shrugged. “Maybe Bugs is trying to turn over a new leaf.”
Sally was not convinced. “If Bugs turned over a new leaf, I'm sure it would be blank.”
Encyclopedia kept an eye on the time. At 12:45, he left the garage. Sally remained behind in case any new clients came by.
It was hard for Encyclopedia to believe there were any egg thieves hot on his trail. Still he stayed alert just in case. As far as he could tell, though, no one paid any attention to him.
At one o'clock sharp, Encyclopedia showed up at the corner of Main and Elm, as he had promised.
Bugs was coming toward him, crossing the street with a policeman.
“There he is, officer!” cried Bugs.
“Yes, I see,” said the policeman.
“Just like I told you,” Bugs went on. “See that carton of eggs? I was suspicious when I saw him carrying it. He didn't have a whole bag of groceries or anything. Only the eggs. I followed him to see what he was up to. What did I see? He threw two of the eggs at the windows of a house.”
“I did?” said Encyclopedia.
“Uh-huh,” said Bugs.
“Why would I do that?” questioned Encyclopedia.
Bugs laughed. “Why would you do it? That's easy. You're trying to create business for yourself. Somebody wants to know why eggs are being thrown at their windows. So they come to you to figure it out. Bingo! You've got yourself a new case. Of course, you can't point the finger at yourself. You'll have to frame some innocent bystander.”