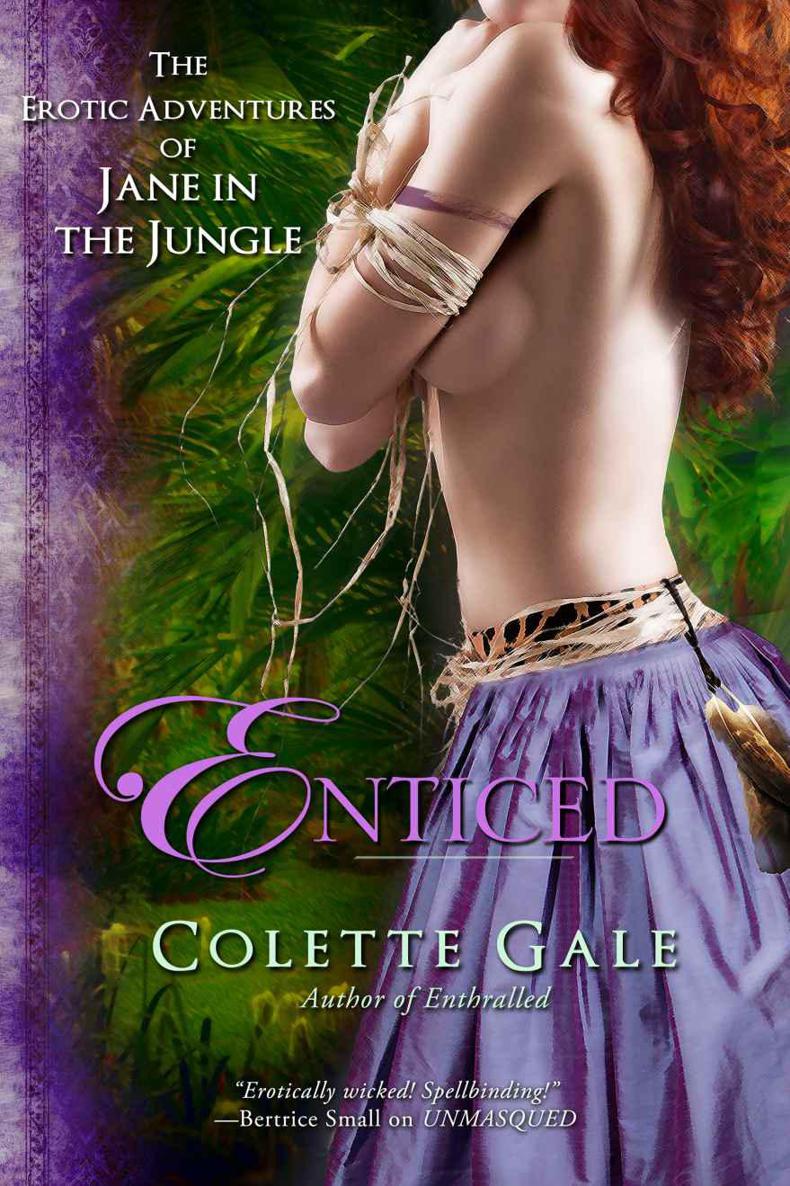 Welcome to the fourth volume of Miss Jane Clemons’s adventures in the jungles of Africa.

If you have already read the first three volumes, you need not continue with this introductory epistle, and can move directly to the first chapter. For those who have not enjoyed
Entwined, Entangled
or
Enthralled
, please feel free to read on below.

During the late 19
th
century, the British indulged in much exploration of Africa, searching not only for gold and gemstones, but also for knowledge of this fascinating Dark Continent.

Professor Everett Clemons, the famous lepidopterist, and his daughter Jane were two of the most famous British citizens to embark on these travels, and although Jane published a book of her drawings and notations about the butterflies her father studied during these trips, there remained little information about her own thoughts and adventures—until now.

For, not long ago, I was fortunate enough to come upon an old trunk filled with Professor Clemons’s journals and butterfly specimens, and there, within, I also found the treasure of Miss Jane Clemons’s personal (and highly intimate) journals. They detail her experiences in the jungle—being captured by natives, being abandoned by her fiancé Jonathan—as well as her passionate relationship with the wild man of the jungle known as Zaren.

Incidentally, after careful analysis and research, I have come to believe the jungle man Zaren—whom Jane eventually brought back to London for a time and who was quite well received by Society—was the inspiration for Edgar Rice Burroughs’s well-known Tarzan character (a thesis, unfortunately, that is sharply denied by descendants of Mr. Burroughs).

I leave the reader to his or her own conclusions regarding this theory.

Because there were so many volumes of Jane’s journals, I have chosen to publish a series of short segments over time in order to make them publicly available as quickly and efficiently as possible.

I do hope you’ll indulge my decision to follow the popular form of literature from this era and publish Jane’s journals as a serialized collection. Not only does this enable me to be more efficient in releasing sections of her work (for it is quite an arduous task to pore over the very intimate and detailed descriptions of her experiences), but it also allows you the reader to experience the story in segments rather than in one overwhelming gulp.

I must also warn you: I have kept with the tradition of the times, ending each serialized episode on a cliffhanger.

The previous volume ended with Zaren helping Jane to escape from a small village of natives who believed she was a Fertility and Sex Goddess. The man known only as Cold Eyes was the leader of the tribe, and he agreed to take Jane (for her so-called powers) in exchange for giving her worthless fiancé Jonathan the map to a diamond mine. We don’t expect to see or hear from Jonathan again, for the map led to a mad lioness’s den…and we heard the feline roar as she attacked the encroacher.

As Jane and Zaren swing from tree to tree in their escape from Cold Eyes and his companions, something happens to Zaren and they begin to tumble down through the trees…

I hope you find Jane’s adventures enlightening, exciting, and titillating as we follow her further adventures as a young woman in the Madagascar jungle.

Jane felt Zaren jolt
with a low grunt. She looked down to see an arrow protruding from the side of his torso. Before she could react, he jerked again sharply and then they were falling through the air.

She stifled a scream, clinging to him while grasping wildly for a vine, a branch—anything that might slow their descent. Her fingers closed over one of the thick ropes, but she could not manage the weight of their fall. The vine slid through her grip, burning and rough, and then they were tumbling once more.

Zaren grunted and gasped, then moved suddenly as he snagged a vine at the last minute. Their descent slowed as his muscles bulged against her…then something gave away and they were in free-fall again. But the ground was closer now, and all at once they thudded into it in a tangle of limbs and loose leaves, his arms curled protectively around her. Jane landed on top of him, and felt him go still.

“Zaren,” she gasped. Though the breath was knocked out of her, Jane scrambled off him in a swirl of flower-bedecked hair. “Zaren,” she cried again when he didn’t move. The sound of voices and thrashing through the jungle was much too close.

The arrow had snapped in half during their fall—probably causing his second jolt as it tore up through his skin—and blood oozed from its jagged wound. He was panting, and she noticed a second arrow in his leg as he shifted and his eyes fluttered open. He’d protected her from the worst of the fall, twisting at the last minute to take the brunt of the impact after slowing their tumble as much as he could.

“Jane,” he said, reaching for her even as one hand went to touch the broken arrow still in his side. His blue eyes were fierce despite the tremor in his fingers. He pulled to his feet more slowly than she would have liked, and the crashing sounds and voices were too close. He tensed, like a cobra ready to strike. “You run. Go!”

“No,” she said, tugging at his solid arm, trying to pull him into the jungle with her. But even stunned and injured, he was as immovable as a boulder. “Not without you.”

“No. I will fight them.” His eyes blazed with the fury of a wild animal, and for a moment even Jane was afraid of him. “I will stop them.”

“You’re hurt. They’re coming! Zaren, please!” Why wouldn’t he listen? She saw his heaving breaths, the blood leaking stubbornly from the two injuries, the gingerly way he moved. He wouldn’t last two minutes if they attacked him.

“Not hurt!” As if to prove this, he yanked the arrow from his leg. Blood spurted from the wound, and before Jane could stop him, he pulled the other one from his side—this time with a roar of pain and outrage. “You go!”

But it was too late. Their pursuers burst into view, spears and arrows at the ready, and all at once they were surrounded.

Cold Eyes stumbled into the clearing behind them, brandishing the biggest spear of all. He was panting, and his eyes were bright with fury. He snapped something to his tribal companions, and two of them lunged forward with their sharp blades.

Jane dodged in front of Zaren, spreading her arms wide, knowing they wouldn’t dare hurt their “goddess.” Zaren growled in her ear and tried to yank her away, but she ducked out of reach and stomped on his foot as hard as she could.

“No,” she hissed back up at him. “
No
.” Perhaps there was something in her eyes, for he didn’t attempt to move her again—though he clamped a solid arm around her waist from behind as if to be prepared to do so if necessary.

“Let us go,” Jane said boldly to Cold Eyes. “You’ve had your pleasure, taken it all from me, and there is nothing left—”

“We aren’t finished with you, goddess. There is still much more to come.” His eyes glittered darkly and he stepped closer to her as his men eased back.

Zaren’s arm tightened around her waist. He growled, low and threatening, sounding so much like a feral cat that some of the villagers glanced uneasily up into the trees.

Cold Eyes looked at him closely for the first time, and his eyes flared in surprise. A little, ugly smile twitched his lips. “You. The wild man who was raised by wolves. I have heard of you.”

Zaren’s only reply was a sneer, with a different deep, guttural sound. The threat and his antipathy couldn’t be more evident.

“So he doesn’t speak? Nevertheless, I cannot let you go, goddess. You won’t make it far. This man is weak and bleeding. His injuries will attract the animals and you won’t last the night. He might not last at all.”

“He knows how to protect himself,” Jane replied. But she felt Zaren sway against her, and the blood that had been flowing from his side now seeped all over her torso, wet and warm. More blood had pooled on the ground, spattering her leg and foot. Was he even leaning on her now, ever so slightly?

Her heart thudded harder, and uncertainty weakened her resolve. He was badly injured. He needed treatment and care. And if his blood would attract predators…

Cold Eyes seemed to recognize her concern. “Your savior interrupted our ceremony. We must finish it, or they will be sorely disappointed.” He gestured to his spear-toting companions. “I do not wish to face their wrath should I allow their goddess to go free.”

At that moment, Jane realized Cold Eyes had only tentative control over his people. One false move and they would rebel—likely violently. No wonder he had grasped at the opportunity to present to them a fertility goddess. It was his only hope of retaining leadership over the unhappy, desperate villagers.

He and she both knew that her presence would make no difference in the procreation aspects of these people. But Cold Eyes didn’t care. He, like every other man, wanted power and control. He was greedy. Just like Jonathan had been.

Jane narrowed her eyes thoughtfully. “I will go willingly with you and will…submit…to whatever you require of me, short of bodily injury.
If
,” she added, holding up her hand to forestall his triumphant speech, “you allow me to administer to him, and to tend to his wounds. Provide me anything I require to make him well, and you may do what you will to me. If you do not—or if he dies,” she said, stepping closer to him while holding his gaze, goddesslike, with her own, “I will show your people that you have brought my wrath upon them…and an angered goddess must have a sacrifice in order to appease her fury. I shall make certain to make my choice of sacrifice known. If you agree to my terms, you must bow to me. Now.”

Cold Eyes recoiled as if he’d been struck, and black fury burned in his gaze. But he kept his lips in that flat, cool smile and bowed deeply to Jane.

All at once, there was a shift in the place, and bows and spears descended along with their owners as the rest of the men made their obeisance to Jane.

Yet Cold Eyes was on his feet almost instantly, giving sharp orders to his men.

Zaren started as they moved toward him, his arm tightening around Jane’s waist. He bared his teeth like a ferocious beast and she felt the unyielding shift of his muscles against her.

“We will go with them,” she said, turning to look up at him. “I will see to your injuries.”

“No.” The sound was little more than a growl.

She pulled away—that in itself was a testament to the disturbing fact that he was becoming weaker. “Zaren, we must go with them. You cannot bleed all over the jungle.” She smiled, forcing her expression into something light and unconcerned.