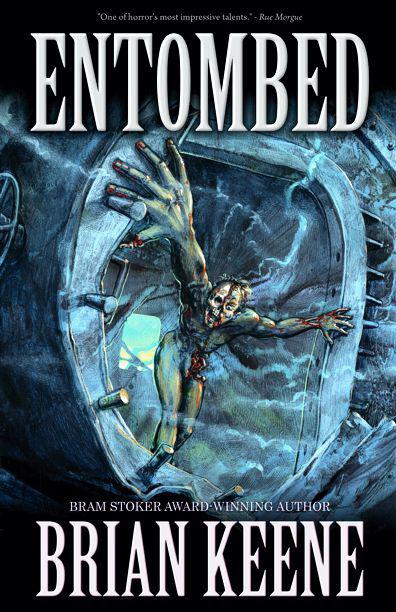 This time around, my thanks and sincere appreciation go to everyone at Deadite Press, Tony and Kim at Camelot Books, Mark Sylva, Tod Clark, and my sons. Special thanks to Andy Deane, Bella Morte, and Metropolis Records for their kind permission to use the lyrics of “The End of the End”. Please give them your support.

This one is for Sultan White and Wrath James White,

with the hopes of many more zombie Christmases to come.

This novel takes place in the same “reality” as my novel Dead Sea, however, since it is not a direct sequel, knowledge of one isn’t required to enjoy the other. Also, although many of the locations in this novel are based on real places, I have taken certain fictional liberties with them. I’ve also fictionalized other locations based upon a variety of their real-life counterparts. So if you live in any of them, don’t look for your favorite luxury hotel or impregnable nuclear war bunker. You won’t like what’s lurking there now.

I was sitting in the movie room, watching an episode of
Aqua Teen Hunger Force
for the twentieth time and talking to the disembodied head of Dwight D. Eisenhower, when the rest of the group decided that we should all start eating each other.

Pickings were slim for my viewing pleasure. The bunker’s media collection consisted of a season of Reba McEntire’s old sitcom, an episode of
The Wiggles
, a couple of Will Ferrell movies, the re-mastered and updated first
Star Wars
trilogy, a season of
Aqua Teen Hunger Force
, a season of
American Idol
, and a documentary about deer hunting. I avoided watching
Reba
because seeing Joanna Garcia, the actress who played Reba McEntire’s daughter, made me horny, and that was a totally unhelpful feeling to have when one is sixty feet under the ground and recently divorced. Ditto
The Wiggles
(say what you will, but some of their dancers were totally fucking hot). Watching the deer hunting documentary made me think about how much I missed deer bologna and venison steaks, and that made me hungry—which was an even less helpful feeling down here in the bunker than being horny. I’d watched
Star Wars
a few times since we came down here, but it still pissed me off that in this updated version of the film, Han Solo no longer shot Greedo first. And as for Will Ferrell? Fuck him. I never liked Will Ferrell’s movies—he was about as funny as cancer. And I’d thought that
American Idol
sucked even before the world ended, and saw no reason to start watching it now. Besides, it didn’t matter who won, since they were probably all dead now.

That left
Aqua Teen Hunger Force
, which was okay with me, although sometimes I wished that someone would have left some
Metalocalypse
DVDs down here, too. Sometimes I wondered if the guys who’d created those shows were still alive somewhere, maybe sequestered in a bunker like I was and still making shows in the hopes that someone might see them some day.

I had the lights turned off. The media room was lit only by the glow from the huge flat-screen television that occupied most of the wall at the front of the room. I was sitting in the left hand side of the front row, right next to Eisenhower’s head. The chairs weren’t very comfortable. They hurt my butt if I sat in them too long, and they squeaked every time I moved around. Before Hamelin’s Revenge turned the world to shit, the chairs had only been used by visitors to the bunker—tourists who sat in them once a day to watch a seven-minute documentary on the facility’s history. Dwight D. Eisenhower was a big part of that history, which was why his head was in the movie room, too. That was also why the movie room had been updated to play DVDs rather than the old reel-to-reel movies. It was easier for me and my fellow tour guides to press play on a DVD player than to fool around with actual film canisters. I thought Eisenhower would have approved.

Eisenhower didn’t say much. He couldn’t. He was a bronze bust, and bronze busts don’t talk. But that was okay with me. He didn’t have to say anything. He was a good listener, and a good listener was what I needed—especially since most of the other people down here were slowly turning bat-shit crazy. There was more than one Eisenhower in the room. Framed pictures of him hung on the walls, along with photographs of the hotel sitting above the bunker, and a few snapshots of the facility from when it was still under construction—old black and white images of the Army Corps of Engineers swarming over the site with bulldozers and dump trucks and cranes.

Swarming, just like the dead rats that swarmed out of the sewers in New York City. That was how this whole thing started—Hamelin’s Revenge. New York seems so far away, especially here in the mountains of West Virginia. But it must be true what they say—that New York City is the center of the world, because what started there swept across the rest of the planet in less than a month’s time. I still get chills when I imagine what it must have been like. It happened during the evening rush hour. Zombie rats crawled out of the sewer and began attacking pedestrians. Being dead, they moved much slower than a living rat would, but that didn’t matter. The city was so choked with traffic that their pickings were easy. The sidewalks and streets and bus stops and subway platforms were gridlocked, packed with commuters. People tried to get away but there was nowhere to go. The rats fed. Many people were bitten to death, the flesh stripped from their faces and hands, their stomachs chewed open so that their attackers could get to the good stuff inside. Many more victims were trampled to death as their fellow New Yorkers fled.

The breaking news dominated television and the internet that night. At first, MSNBC called it a riot, and both CNN and FOX speculated that it had been a possible terrorist attack. Soon, they confirmed that it had been rats—dead rats. As impossible as that sounded, eyewitness accounts confirmed that the rats were indeed dead when they began their attack. Pundits scoffed at this, and the authorities refused to comment, but soon enough, the live footage proved this to be true, as unlikely as it seemed. The coverage was fluid and the situation on the ground grew more chaotic with each passing hour. FOX had footage from inside a hospital. The emergency room was filled with wounded New Yorkers. Those who had suffered bites got sick very quickly. A short time later, they died. And after they died, they came back, just like the rats.

Before that first night was through, the media already had a name for it—Hamelin’s Revenge, the return of the rats the pied piper was hired to get rid of. It didn’t seem to matter that Hamelin was the name of the town, rather than the piper himself. I don’t know. I used to wonder sometimes if the media had names and graphics on standby, just waiting to use them when all hell broke loose. It certainly seemed that way that night. There was Wolf Blitzer on TV, with a big graphic of a pied piper dressed like the Grim Reaper standing behind him and the words ‘Hamelin’s Revenge’ superimposed over the character. Dead people and dead rats attacked the living, and then those who’d been infected joined their ranks. The media referred to the dead as cannibals, but then, during a 2am news conference, the White House Press Secretary used the word that was on everyone’s mind.

By dawn the next morning, the National Guard had locked everything down. New York City was officially quarantined. They blockaded the bridges and tunnels and rail tracks. The Guardsmen were given the order to fire on anyone trying to escape the city, and some of them actually did. They gunned down civilians in cold blood. Then some of the other soldiers refused the order to shoot civilians and turned on their comrades instead. Soon enough, the troops were fighting each other—and fighting the civilians who shot back, as well. While dissent broke out in the military ranks, Hamelin’s Revenge broke out of the city. It showed up in Newark, then Trenton, and then Philadelphia. By the end of the second day, it had spread to Buffalo, Baltimore, Washington D.C. and over the border into parts of Canada. The President declared martial law nationwide, even in those areas where the disease hadn’t shown up yet. The army was mobilized. But by then, it was too late. You could shoot a zombie but you couldn’t shoot the disease that caused it to get up and walk around in the first place. All it took was one bite, one drop of blood, pus from an open sore or cut—any exposure to infected bodily fluid—and you became one of them. People that died normal deaths, from illness or accidents or murder, stayed dead, but those who came into direct contact with the disease and managed to get infected—they became zombies. At first, the disease only infected humans, rats and mice. By the second week, however, it had jumped species and started showing up in dogs, cats, cattle, bears, coyotes, goats, sheep, monkeys and other animals. Some creatures, like pigs and birds, seemed to be immune, but most weren’t so lucky. Even weirder, some species that had seemed immune at first, like squirrels and deer, became infected later on. In truth, I’d never understood why the disease didn’t impact squirrels right away. After all, squirrels are just rats with bushy tails. All I know is that if the disease ever does begin to infect birds, humanity is fucked.

Once the disease began jumping from species to species, it became unstoppable. America, South America and Canada fell first, followed by Europe, Asia, Africa and then Australia. After that, we lost what little satellite television coverage remained. The last thing any of us saw, as far as I know, was footage of zombies shuffling through the streets of Mumbai.

Of course, the zombies weren’t the only threat. There were roving gangs of looters, criminals, extremists and military and law enforcement personnel who’d decided to watch out for themselves, rather than the rest of us. The new law was the law of the gun. Bad enough you had to worry about getting eaten by a dead friend or family member—you also had to worry about getting robbed or raped or murdered by some crazy, antisocial fuckwit taking advantage of the chaos and thriving in the new world disorder.

Not that the powers-that-be had to worry about any of that. Washington D.C. was evacuated early on. They sent President Tyler, the Vice-President, the Cabinet, the Pentagon big-wigs, and all of the House and Senate members and their staff and family to secure underground bunkers in Pennsylvania, Virginia, Maryland and Colorado. Bunkers just like this one, except more modern. I have to wonder if they’re in any better shape than we are. Probably. I doubt our leaders are sitting around watching
Aqua Teen Hunger Force
and voting on whether or not to resort to cannibalism. At least, not yet.