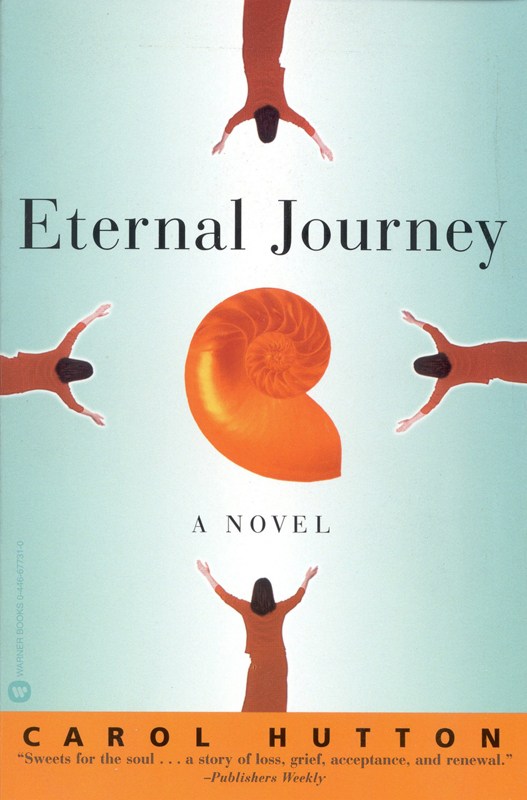 This book is a work of fiction. Names, characters, places, and incidents are the
product of the author’s imagination or are used fictitiously. Any resemblance
to actual events, locales, or persons, living or dead, is coincidental.

All rights reserved. No part of this book may be reproduced in any form by any electronic or mechanical means, including information
storage or retrieval systems, without permission in writing from the publisher, except by a reviewer who may quote brief passages
in a review.

A hardcover edition of this book was published in 2000 by Warner Books.

In loving memory of my mother, Charlotte, the true storyteller in our family. Through her stories, my mother taught me about
life and loss with the insight of a psychologist, the guidance of a teacher, and the wisdom of a mystic. Her gift for finding
meaning in seemingly meaningless pain and disappointment continues to amaze and humble me.

Like any effort of this nature,
Eternal Journey
represents the work of many people. Of all those who supported me to this point, I am most grateful to my agent, Janell Walden
Agyeman, and my editor at Warner Books, Diana Baroni. Thanks also to Roz Alfaro-LeFevere, Patti Cleary, Susanna Barciella,
Harriet Forman, Sharon Geltner Schwartz, Dorothy Powell, Vanessa Reynolds, and Mary Lynn Swartz, for their assistance, support,
and encouragement during the early stages of this undertaking.

Heartfelt thanks to my lifelong friends Regina Pakradooni, Cecilia West, Janet Colesberry, Barbara Meyers, and Bonnie Eyler;
and to my sister, Barbara Quigley, whose friendship and love were the inspiration for the story.

Special thanks to my colleague, mentor, and friend, Edie Stark, consummate grief counselor and death educator, who enlightened
me over twenty years ago to the realization that death is not to be feared.

I am most indebted, however, to those who are no longer here. When penning the story I felt the spirit of my dear friends
who have died. The pain of their passing and the insight that came with their loss somehow make
Eternal Journey
much more than fiction.

There is no coming to consciousness without pain.

T
he wind stung Anna’s tear-stained face and mouth, causing her lips to crack. Placing the single peach rose on the coffin,
she could taste blood as she bit down hard to ward off tears. Her breath was coming in small, painful gasps now, and panic
began to set in. She forced herself to watch as Beth was lowered into the cold, hard ground. Chest constricted, hoping to
find something or someone else to focus on, her eyes rested on Tom. He looked so old, and so tired.

For a brief moment she thought she might be okay. As she turned toward the car, the sobbing began. The tears streamed down
her face and her cries became audible. She felt as if she might vomit. “Beth, Beth,” she repeated to herself. “This isn’t
happening.” The grief was choking her heart; her chest was so tight she could hardly breathe. She put her face in her hands
and wept uncontrollably. A disembodied hand took hers, guiding her to the back seat of the limousine. This was all she would
remember from the funeral. Despite the many times Anna went over it in her head in the weeks following, she could not remember
anything else from that day.

And so her best friend, Beth, was laid to rest. Funny, smart, loyal, pretty, kind, and unassuming Beth. Two years earlier,
she had called Anna on a Sunday morning to find out about alternative treatments for advanced breast cancer. For Anna, that
was the beginning. The beginning of this unrelenting pain and anguish, the beginning of what felt like the end.

Beth O’Neill, Anna thought, was the better half of the duo who had suffered through twelve years of nuns and catechism, rosaries
and incense. Beth and Anna had shared a childhood, survived adolescence, and sailed through college and graduate school together.
They were playmates turned soul mates.

They grew even closer during their adult years, despite shifting priorities of husband and children, careers and success.
They’d joke about how they would be reunited in old age, rocking on the porch of the retirement home, boring the young attendants
with stories of their youth.

Cancer had changed everything once again.

It was unbelievable, but Beth was the third of Anna’s friends to die. Anna had become obsessed over cure rates and cancer
statistics. Three friends in three years, all gone. But numbers and life-expectancy statistics meant nothing anymore. Cruel
chance did. The scientific, analytical side of Anna, which served her so well as a psychologist, insisted that all three friends
should have lived. They
should
have been among the 90 to 95 percent in the “cure” category. But they weren’t.

Another side of Anna, the more private side, could not—could never—get over the tragedy of these lives cut short. She berated
their fates. Her friends should have been among the survivors, enjoying many more years of life, according to the “experts.”
Instead, they were sent to early graves.

The first time she experienced losing a friend it was hard, and the second even more so, but it was Beth’s death that shook
Anna to her core. Beth had been very special. She and Anna had a connection that defied explanation. It just wasn’t fair that
she had to die. Why should Beth be the one to suffer and leave this world?

At first Anna was too tired to be in touch with her feelings, but soon she became angry. Her heart ached for her friend Tom,
Beth’s husband of twenty years. It didn’t seem possible that he was now alone. Anna kept picturing his lost and tired eyes
staring at her as the coffin was lowered into the earth. She worried about how Beth’s daughters would cope. Anna felt inadequate
and weak as she reached out to them. Once alone, however, Anna began to feel the depth of her own loss. Her heart was heavy
with sadness that struck like a clap of thunder and remained like a cloud blocking the light of day. Her best friend’s death
created a cavern of emptiness in her soul. This black hole of loss and grief frightened her. She felt lost and unfocused,
no longer whole. Anna was adrift in a tumultuous sea of pain.

Anna’s mother used to say that bad things always happened in threes. Yet somehow, knowing that these three deaths, this trilogy
of pain, might mark the end of bad times did not make Anna feel any better. In fact, she felt worse. Much worse.

T
hree weeks later, the small plane lifted off the runway at La Guardia Airport like a kite caught in a powerful gust of wind.
Anna usually dreaded these short commuter flights, but this time she hadn’t even given it a thought. As the plane began its
ascent, Anna became hypnotized by the sight of her own reflection in the window. She watched as the features of her face gradually
blended into the white backdrop of floating clouds.

Mesmerized by the stark emptiness of the cloud screen that formed before her, Anna’s eyes locked like a laser on the vision
that appeared. She sat transfixed as a replay of Beth’s last days and her funeral appeared in the skies. Anna recalled how
Beth had agonized to accept her losses, how she had struggled to embrace her fate. Somehow from the depths of her own solitude
and pain, Beth had managed to give strength and energy to all around her. As Anna sat gazing into the heavens and remembering
her friend, she wondered why she had been spared, why she was the one left.

The little plane sputtered abruptly, then jolted as the engine thrust in its effort to reach cruising altitude. Despite the
turbulence, noise, and violent vibrations, Anna was mindful only of her loss and its injustice. As the small plane climbed
higher and found smoother air, the vision before her eyes melted into a vast emptiness, causing her very being to relax. She
felt transported in time.

At first Anna thought it was the pilot trying to make himself heard over the whine of the propellers. But like clouds that
pull apart in the sky, the sounds became clearer and very distinct. Anna heard a calm and gentle voice at the funeral, softly
reading the words Beth had written in her final days:

Thank you, my loving husband, my beautiful daughters, my devoted friends, for giving me such a blessed life. I have tried
to leave some part of me for each and all of you. Recently I have been reflecting on my life, and I have realized that if
I had the chance to go back in time and alter the course of my existence, I wouldn’t change anything. I have lived a happy
life and I have lived it to the fullest. As odd as it sounds, this cancer has brought me to an awareness that perhaps I would
not have acquired without it. And it is with this knowledge that I say my legacy for each of you is to remember to live in
the moment….

As Beth’s words faded from her consciousness, Anna realized she was looking down, through tears, on the island’s distinguishing
aerial landmark, Oyster Pond. It wasn’t long before Anna, like the small plane, once again touched the ground. As the plane
rolled down the runway, Anna stared at the rickety, weather-beaten terminal, her mind numb. She would have sat there all afternoon,
transfixed upon the small, faded wooden building, if not for the gentle tap on her shoulder. “It’s time to go,” she heard
over her shoulder. With a slight shudder, she came out of her reverie, made a feeble attempt to smile at the man, and gathered
her things.