Evenings at the Argentine Club 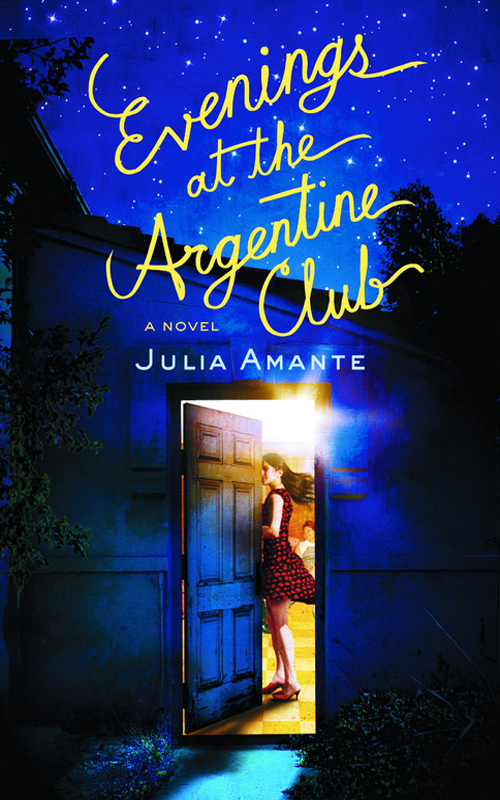 Evenings at the Argentine Club

“A big, beautiful novel of love, family, and the close-knit community they inhabit. By turns touching, funny, tragic, and triumphant, it’s the story of an endearing group of people in search of their own American dream.”

“Julia Amante has created an enchanting community to fall into, true-to-life characters to fall in love with, and a rich story that will fall directly onto readers’ keeper shelves. Amante’s tale is tantalizing tango for the imagination.”

—Lynda Sandoval, award-winning author of
Unsettling
and
Who’s Your Daddy?

I dedicate this book to both my parents.

My mother, who has always been the anchor of my life, encouraging me to dream while being “realistic.” She has also been the one who has taught me to love my country—the United States of America. She chooses to never notice our country’s faults, only the opportunities it offers us; and she stands firm that there has never been and never will be a nation as great as ours.

My father, who was the dreamer. The one who always risked everything for the chance to reach the stars. He taught me that there are worse things than failing, namely never trying. Although he never said the words, his actions shouted loud and clear that there was no point in living if you didn’t go all out. He was also the man who taught me to love my roots passionately. To learn about my culture and to know that it will always be part of who I am.

Mom, Dad, I owe you both so much. Thank you. This book is for you.

I usually have a laundry list of people whom I want to acknowledge and thank. My family is always up there. They know that I love them and am grateful for every minute of my life that they have to share with my characters.

So this time I want to focus my appreciation on two special people, because this book would not exist without them.

The first is my agent, Kevan, who came on in the middle of this project and went beyond her job requirements to see this book in print. Kevan, thank you! I hope this is only the beginning of the work we create together.

And second, my editor, Selina, whom I dreamed of working with from the first time I heard her speak on a panel years ago. Every author reaches a point in her career where she needs to grow and stretch. Selina has provided me with this challenge and opportunity, supporting me every step of the way. And the result of our joint effort is this book. Thank you for helping me make my work the best it could be. You’re a fabulous editor.

T
o every Argentine immigrant, July 9 is a day that brings back memories of family celebrations centered around food, wine, and heart-pounding renditions of the national anthem playing on every radio and TV across the nation. July 9 is Independence Day. A day of freedom and liberty and new beginnings. But to those Argentines living in America, it’s also a day to admit with a fair amount of guilt that they chose to give up their old life for the intangible, unexplainable dream of… something better.

Victoria Torres couldn’t say she understood what it felt like to leave behind everything one had ever known for something new. Leave parents, siblings, friends, an entire way of life, to live among strangers who spoke differently than you did and believed in values that were foreign compared to those you grew up with. To do something of that magnitude took a sort of internal strength that she lacked. When she thought of immigrants and their decisions to leave their homes, she figured either life had to be so bleak in their own countries or their dreams had to be so immense that they were willing to risk everything just for the hope of a little magic—a chance to change destiny.

Victoria admired that kind of courage. So much so that she tried to be sensitive to what her parents went through every Argentine Independence Day, even if the melodrama appeared to go over the top. She’d learned after twenty-eight years of living with them to accept their ritual of lament followed by an evening of celebration.

The lament period had occurred this morning, with phone calls home and personal stories both her father, Victor, and her mother, Jaqueline, felt compelled to share with her yet again over breakfast.

“July is cold, not like here,” her mother had shared. “We wore our best sweaters, and after the family barbecues we went dancing until the early hours of the morning.”

“Don’t forget the marches down Avenida de Mayo,” her father added. “Remember the freezing year that it snowed? The first time since 1918! What was it, 1974?”

Victoria drank her earthy café con leche and listened, not because she hadn’t heard the stories a million times but because it made them so happy to reminisce. Argentine immigrants, in her view, were fanatical, proud people who would be forever tied to a country they would never return to again. Her father had once described that the way he felt about his country was the same as what a man feels for a woman he once loved and never got over. Tragic.

But the morning trip down memory lane didn’t last long. Mostly because although July 9 might be an important date in Argentina, here in America it was just another workday, at least for her family, who owned a popular restaurant in downtown Burbank. And Sunday was the busiest day of all at La Parrilla.

The family traditions were put on hold until the evening, when they would attend the celebrations at the Argentine Club.

The Argentine Club itself was a piece of Argentina transplanted to American soil. A nondescript building in Burbank, California, that was the center of her community and a part of Victoria’s life since the day she was born. It occupied so much of her life, and that of her parents, that she considered it a second home.

And since much of the preparations for the July 9 celebration fell on her shoulders, she urged her father out of the house so they could get to work at the family restaurant early. The sooner she could get her job done at the restaurant, the earlier she could head to the Argentine Club before the other members arrived.

Once at work, Victor set aside all thoughts of Argentine Independence Day and focused on the restaurant. They had a quick meeting to start the day, reviewing reservations or any special event going on. Victoria placed all the food orders, except liquor. She handled the planning of private party events. And she took care of the physical appearance of La Parrilla. Things her mother used to do, which had eventually been passed on to her with the idea of training her to one day assume complete control of the business.

Victor studied the meat requirements for the weekend. “Mirá,” he said, handing her a sheet of paper. “Call the supplier and tell him to deliver a shipment of short ribs, Italian sausage, flank steak, and sweet chard to the Argentine Club, as well as the usual shipment to the grill.”

The grill served a staggering amount of well-seasoned beef every night. Every day Victoria put in a fresh order. She scribbled the extra amount he suggested on her notepad, “I’ve got it.”

“Last year they delivered a double order to the restaurant. Nothing to the club.”

“I remember.” She lowered the pad and smiled at her father. “I’ve got everything under control.” She placed a hand on her father’s shoulder and dropped a kiss on his cheek. “Don’t worry.”

Victor nodded. Never one to show emotion, that was sufficient to tell her he’d lay off. “What time are you getting to the club?”

Victoria loaded her notepad in her bag already full with books, her PalmPilot, iPod, and an assortment of colored pens. “Early enough to help with the setup but late enough to avoid listening to the well-meaning nagging from every mom and grandma at the club about my weight and lack of love life.” Painful as it was to admit, she was a good fifty pounds overweight, and it collected mainly in the midsection and hips of her five foot five frame. In order to minimize the obvious, she shopped in the plus-size section of Nordstrom, choosing elegant wide-leg jeans, solid dark colors, tops that all hung loosely past her hips. But the truth was, she wasn’t fooling anyone. Least of all men. Hence, her lack of love life.

“Hmm,” he said. “I don’t know why you don’t tell them all to mind their own business.” As they were exiting the back office,
a shipment of wine came in and the bartender interrupted to ask Victor to sign for it. “I’ll be right there,” he said without
breaking his stride into the already bustling restaurant, where waiters worked rapidly, preparing for the lunch crowd.

The popularity of the restaurant had taken some time to grow into what it was today. Victoria’s father had opened it when
she was about ten years old. She still remembered the day Victor had come home with the idea and shared it with her mother.
Excited, they drove to the building he wanted to purchase in downtown Burbank. They’d looked through the filmy windows of
the closed-down diner as a light drizzle fell on their heads. But no one noticed the weather. She and her sister ran up and
down the sidewalk, happy because their parents smiled and spoke a mile a minute in Spanish about the possibilities.

Today, the restaurant was so much a part of the community, she couldn’t imagine driving down San Fernando Boulevard and not
seeing it there. But the inside was dark and felt outdated to her. Victor had upgraded the sound system a few years back,
and rather than playing a Spanish radio station from tiny corner speakers, Victoria had convinced him to invest in quality
classical music, which now softly filled the room. But she knew it wasn’t the music or the intimate lighting or even the location
that made the restaurant a success. It was the food itself, and Victor.

“Those women have nothing better to do than to stick their noses into everyone’s business,” Victor continued. “Who are they to tell you what you should look like or when to get married?”

Her father was in many ways her ally. Not that he didn’t have his own ideas of how she should lead her life. But at least he didn’t nag. He flat out said, “I don’t like that man, he’s not Argentine, get rid of him,” or, in her younger years, “Don’t embarrass your family by dressing like that.” Or Victoria’s personal favorite, “I didn’t sacrifice my goals in life to watch you [fill in the blank].” Anything he hadn’t agreed with—risking her life at a rap concert, throwing money away on self-improvement
gurus, becoming a Protestant—he had squelched before they’d had a chance to grow. And once her father said what needed to be said, that was the end of the discussion. No matter how old she got. Her mother once told her that her father was right even when he was wrong. Who could argue with that?