Everafter (Kissed by an Angel) 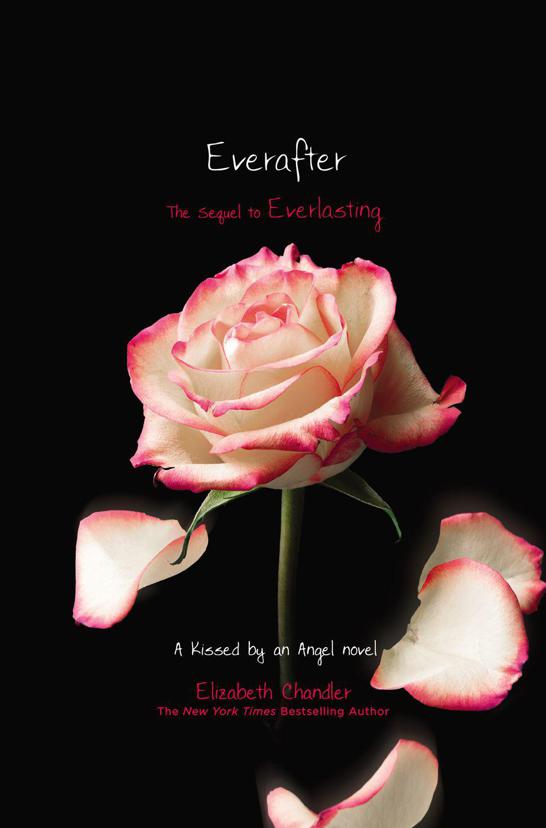 To my husband, Bob, now and everafter

EVEN GREGORY WAS STUNNED BY THE DEADLY
explosion of his hate. If only he had struck
Ivy
—that was Gregory’s first thought.

Emerging from an exhausted darkness, he recalled with pleasure the scene at the beach: a cocky lifeguard scanning the sea for someone to save, suddenly struck down by lightning—
his
lightning. Forced to leave Beth suddenly, Gregory had seethed with anger, and his demonic fury had been glorious, an electric show of deadly might.

Still, the lightning event had ended too quickly.
Hovering over the lifeguard, staring down at the pattern of a metal chain and cross burned into his victim’s chest, Gregory had realized that death itself was rather dull. The dying was the interesting part. The scent of fear in the victim and the horror in those who looked on, these were the kinds of things that could ease his hellish pain.

Despite his power, Gregory longed to have back his human abilities. He needed a reliable servant, someone whose mind wouldn’t fight him the way Beth’s had. Happily, Ivy mixed with all kinds of people, even a guy the police were chasing for murder.

A tantalizing thought took hold of Gregory’s spirit: What if, using Ivy’s new friend, he could deceive her, drive her to despair, and drag her down to hell?

Now. Ever. Ours.
The voices were speaking to him again.

What if he could destroy her hope of ever joining Tristan in heaven?

The power is within you.

The voices were wise, Gregory thought; they knew him better than he knew himself.

WAS HE STILL ALIVE? IVY WONDERED AS SHE STARED
down at the wilting bouquets of funeral flowers. If Tristan had died, would her heart know it?

“Ivy, are you okay?” Dhanya called to her, then opened the gate between the old Harwich church and its cemetery.

Earlier, they had attended the funeral for Michael Steadman and served at the reception that followed. It had been hard for Ivy to look at the faces of the lifeguard’s family and friends, most of them still in shock. The minister had preached on a biblical quote about seeing through a glass
darkly, telling them to trust in God’s inscrutable will. But Ivy feared that the deadly lightning bolt had been an act of Gregory, not God.

Six weeks ago, not long after Ivy, Dhanya, Beth, and Beth’s cousin Kelsey had arrived at the Seabright Inn, the girls had held a séance. They were just fooling around, but looking back now, Ivy knew that was when Gregory’s spirit had reentered the world. Beth, who was psychic and the gentlest, most open person Ivy had ever known, had been the most vulnerable; Gregory had possessed her, forcing her to attack Ivy. It had taken the combined strength of Ivy, Beth, and Will to expel Gregory.

Beth had gone home to Connecticut to recover. In the last four days, Will and Ivy had seen no sign of Gregory on the Cape, but the demon knew how to hide himself. Ivy’s great fear in searching for Tristan was that she would not only reveal to Gregory that Tristan had returned, she would lead the police—and worse, the treacherous Bryan—to “Luke McKenna,” the body which Tristan now occupied.

Yesterday, the Cape Cod police had contacted Ivy, hot on the trail of their suspected murderer. From that, Ivy drew hope that Tristan was still alive. The authorities hadn’t found his—“Luke’s”—body.

Dhanya joined Ivy at the grave of Gregory’s latest victim. “Aunt Cindy said the Steadmans are leaving the Cape.” The Seabright’s owner, Beth and Kelsey’s aunt, was
close friends with Mrs. Steadman. “How will they ever go to the beach again?” Dhanya said sadly. “How will they ever enjoy summer again?”

She and Ivy began to walk. The mid-July sun warmed the silent churchyard, reflecting off the newest and shiniest gravestones. Here and there, a tall tree allowed dappled light to fall on the older memorials, stones splattered with lichen and leaning at odd angles. Ivy paused to run her finger across the top of one of these, marveling that such gentle, slow-growing things as tree roots had the strength to topple granite.

“Cemeteries are lovely places,” Dhanya remarked, watching two butterflies alight on purple phlox, “as long as you don’t know anyone buried there.”

That made Ivy laugh out loud.

“Dhanya! Ivy! Over here,” Kelsey called to them.

They turned, surprised. Their roommate, who was supposed to be working at the inn with Will, was stretched out on a sunny spot near the center of the cemetery. “I’ve got big news. You’re not going to believe it!”

“What I can’t believe is that you’re taking a sunbath on somebody’s grave,” Dhanya replied.

Kelsey laughed and rested her back against the stone, her athletic legs extended straight out in front of her and glistened with tanning oil. She combed her fingers through a mass of wavy auburn hair, then gestured to the markers
on either side. “Have a seat. Rest in peace. You guys have earned it.”

Instead, Dhanya chose a stone bench and sat down gracefully. She had a dancer’s body and a long dark curtain of hair. If she had rested her chin on her hand, Ivy thought, she would have resembled a classic monument to grief.

Ivy sat on a marble curb that marked the border of a family plot.

“Did you hear from Bryan?” Ivy asked.

“He came over before heading to the ice rink.”

Dhanya looked disgusted. “Kelsey, you swore you wouldn’t even glance at Bryan after he stood you up and ignored your texts all weekend.”

“But it turned out he had a good reason,” Kelsey answered, her voice rising with excitement. “Saturday night, he jumped off the train bridge—the one over the Cape Cod Canal.”

“What?!” Ivy exclaimed, sounding shocked, though she had witnessed the incident.

“Dhanya, the bridge was going up,” Kelsey explained. “He leaped fifty feet down to the canal. Think about it—he could have broken his back and drowned if he’d landed the wrong way in the water.”

It was what Ivy feared for Tristan. Standing on the canal bank, she had lost sight of him.

“You’ll never guess why Bryan was up there,” Kelsey went on. “He was chasing Luke.”

“Luke!” Dhanya moved over to sit on the marble curb with Ivy. “Did you know he was still on the Cape?”

“I haven’t seen or heard from Luke since June,” Ivy lied.

“No. Missing in action. Bryan’s been looking for him.”

And if he finds him, he’ll kill him,
Ivy thought. What kind of story had Bryan concocted for the police and Kelsey?

“Why did Bryan chase Luke?” Ivy asked aloud. “I thought they were good friends.”

“Not anymore,” Kelsey replied. “Bryan believes that Luke murdered that girl, the one police said jumped from the bridge a week ago—Alice something or other.”

Alicia Crowley,
Ivy thought. Bryan had already framed Luke for Corinne’s death. Now he was adding Alicia to the list.

“She was close to Luke,” Kelsey added. “Luke sure likes to knock off his girlfriends.”

Dhanya shivered. “That could have been
you
, Ivy.”

Ivy simply shook her head. Her roommates condemned and feared the wrong person. But Bryan had already proven his willingness to kill anyone who learned the dark truth about him. To warn Kelsey and Dhanya—and Beth and Will—would only put them in greater danger.

Tristan, where are you?
Ivy cried silently, though she knew, alive or not, her fallen angel could no longer hear her heart calling to him.

TRISTAN AWOKE IN DARKNESS. FOR A MOMENT HE
had no idea where he was. His clothes were wet; the tarp he was lying on was damp and gritty. The place reeked.

Unable to see a thing, he sat up and stretched out his hands. To his right and left, his fingers brushed against something moist and hard, surfaces that felt like rough plastic, walls that slanted away from him. He realized then that he was rocking slightly, and heard a quiet
lap-lap
. He was entombed in the hull of a boat, at anchor on calm water. He suddenly remembered the old lobster boat he had swum to, recognizing at least three ingredients of the stench: rotted fish, machine oil, and mildew.

He had walked more than forty miles the last two nights, working his way from the Cape Cod Canal to Nauset Harbor, close to where Ivy was staying. There were no private docks or marinas here; the boats were moored in a bay protected from the Atlantic’s fury by a long finger of dunes and small islands at the northern end of Nauset Beach.
Before sunrise Tuesday morning, Tristan had spotted this dilapidated boat among the commercial fishing craft and pleasure boats anchored here. Hidden among the trees, he had watched it all day, as the other boats departed then returned through Nauset Inlet, but no one had claimed it.

After nightfall, overwhelmed by a need to sleep undisturbed, he had swum out to the boat. Its curved, low-slung sides made it easy to board. The lobster traps piled in the stern were tagged with plastic rings that bore expiration dates from the previous December. Checking the vessel from stern to bow, Tristan had figured it was more likely that the boat would sink than its owner suddenly show up.

He’d retreated to the wheelhouse, a three-sided shelter with large square windows. When a party had begun on a boat a hundred yards off, he descended to the snug but smelly quarters below. He figured he had slept for several hours and was glad to emerge now into the fresh air of the open deck.

Looking south, he could barely discern the rise of dark land against the starlit sky, the bluffs on which the Seabright perched. He longed to be with Ivy, but he couldn’t chance it, not yet. It had been three weeks since his picture had made page one of the
Cape Cod Times
, but the stare of a Walmart security guard had been enough to deter him from buying a new cell phone. His old one and the watch Ivy had given him lay at the bottom of the canal. All he had in his pockets
now was a soggy bankroll—from Bryan when he was pretending to be Luke’s friend—and a gold coin with an angel stamped on each side, a gift from Philip.

Baptism of Fire by Christine Harris
Prisoner and Together: All of You series complete set by Silvey, Melissa
Bardisms by Barry Edelstein
Texas fury by Michaels, Fern
Call Me Killer by Linda Barlow
El pozo de la muerte by Lincoln Child Douglas Preston
Jack Templar and the Monster Hunter Academy: The Templar Chronicles: Book 2 by Gunhus, Jeff
One for the Murphys by Lynda Mullaly Hunt
The Third Victim by Collin Wilcox
Blue at Midnight by S D Wile, D R Kaulder