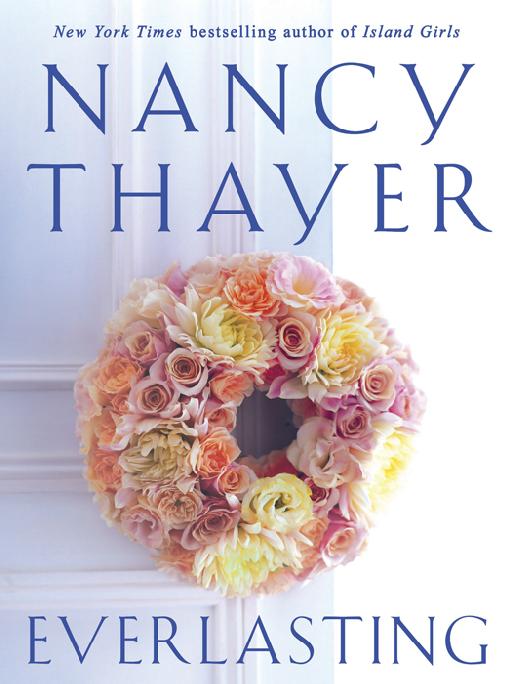 Everlasting
is a work of fiction. Names, characters, places, and incidents are the products of the author’s imagination or are used fictitiously. Any resemblance to actual events, locales, or persons, living or dead, is entirely coincidental.

BALLANTINE and the HOUSE colophon are registered trademarks of Random House LLC.

Originally published in hardcover by Viking Press, an imprint of Penguin Books USA in 1991.

This book contains an excerpt from the forthcoming book
Nantucket Sisters
by Nancy Thayer. This excerpt has been set for this edition only and may not reflect the final content of the forthcoming edition.

Flowers, English country gardens, and opulent family estates are the background for this novel about Catherine Eliot, a rebellious young woman who chooses the work she adores instead of her family’s life, a woman caught between love for a rich Yankee lawyer and a dangerously sensual European.
Everlasting
is my most romantic novel.

Can I tell you how much I loved writing this book? I rented an apartment in New York and rose at 4 a.m. to go down to the flower district to see heavy boxes of delicate blooms packed in ice, just flown in from Amsterdam. I interviewed the florist at the Ritz-Carlton in Boston and a Dutch-born florist who ran a posh Nantucket flower shop. And I worked
revenge
into an arrangement for a dinner table!

I’m delighted that my early novels are being made available to my readers as ebooks. My style has changed slightly, as the world has grown faster, but my subject, family life, remains as mysterious and fascinating to me now as it was in these early books: falling in love, raising children, friendships and betrayals and forgiveness.

I hope you enjoy these early novels and discover some new friends there.

H
ome is where you go for Christmas, Catherine thought, but she wondered what “home” meant. If home was a building, then this expansive old Victorian folly of her grandmother’s stuck out in East Hampton was her home. It certainly wasn’t her parents’ gloomy apartment on Park Avenue. Her brother thought Everly was boring; her sister thought it was creepy; but Catherine had loved this labyrinthine house with its tangled gardens all of her life.

At Miss Brill’s, where she’d been at boarding school for the past five years, there was a girl whose parents were diplomats; they lived in a different country every year. For her, home was her parents; she was at home when she was with them. It wasn’t that way for Catherine. She was her parents’ oldest child, but not their favorite, and in fact the amazing thing was that she seemed to have nothing in common with them at all. The older she grew, the more different she felt. She did love her brother and sister, though; they were younger than she was, still children, and they had no idea of the secrets in her heart. Yet it was when she was with them that she felt truly at home.

Downstairs, they were preparing for the party. Christmas Eve the family exchanged presents, and Christmas morning Santa came, but Christmas night was for the adults. It was 1960, and the routine had remained unchanged since just after the war, when her grandmother first began her now famous Christmas parties. A formal cocktail hour began the evening, followed by a lavish buffet dinner, to which the children were allowed to come if they behaved with impeccable manners.

The third floor of Everly was the nursery floor, with bedrooms for each of the three children, a large playroom, and extra bedrooms for visiting friends. Shelly and his friend George Collier were in Shelly’s room building a complicated structure from electric Tinkertoys. Ann was being dressed by Miss Smith.

She’d been sewing since this morning, when Miss Smith presented the three Eliot children with their Christmas clothes. Catherine and Ann were given dresses made out of rustling taffeta in a bright red, green, black, and gold Christmas plaid, and Shelly was given a matching vest to wear under his camel hair blazer. Catherine and Ann had gone to Catherine’s room together to try on their dresses, which had been cut exactly the same way: a sexless little-girl style, full, long-sleeved, the material falling straight from the shoulders to the floor in a wide A. The collars and cuffs were of intricate white lace. The dresses were beautiful, and ten-year-old Ann, with her blond hair and blue eyes, looked like a Christmas angel, but Catherine felt like Alice in Wonderland once she had eaten too much cake and grown up so fast that she hadn’t had time to change her clothes.

Catherine had stared at herself in the mirror, her mouth tightening in resolve. She’d slipped out of her dress and into a robe.

Catherine had knelt, put her hands on her sister’s arms, and smiled.

“Ann. How old are you? You’ve just turned ten. Shelly’s almost twelve. But I’m almost eighteen. Your dress looks perfect on you. But my dress makes me look like a giant circus baby! You know it does.”

“I think Mother wants us to look like children.”

“Yes. That’s what she wants. But that’s not what she’s going to get. I’m not a child anymore.”

“Oh, Catherine. What are you going to do now?”

Catherine had hugged Ann against her. “Don’t you worry about that. I’ve got a plan. Go on now, find Miss Smith.”

As soon as Ann had headed reluctantly to her own room, Catherine swooped down on the horrid Christmas dress. She turned it inside out, studied it, then with great care began to rip it apart at the seams. All Christmas Day, while the adults slept off their Christmas Eve indulgences and Shelly and his friend George ran screaming through the gardens, falling into the shrubbery with hair-raising shrieks, while Ann played dress-up with her porcelain doll, Catherine had cut and fitted and sewed. She used an old swimming suit top as a pattern. When she was through, she had constructed a dress from the Christmas material that had a full skirt but a tight and strapless bodice. She would wear no jewelry. At seventeen Catherine had the slender, wraithlike waist and hips her mother torturously dieted for and the swelling full bosom that her mother lost whenever she succeeded in her dieting.

Now she clipped the thread that closed the last seam, shook out the dress, and laid it across her bed. Looking down at it, she smiled. “There,” she said, satisfied.

She stretched to relieve the ache in her neck and shoulders, then rose and stretched again. The room was stuffy. She went over to kneel on the cushioned window seat and cranked open the casement window. Cold December air blew in. It was not snowing, but the shrubbery and trees were iced with a frost that glittered like the laughter drifting up the stairs from the party below.

Catherine took a deep breath of the bracing air, then closed the window. It was time to get dressed.

She bathed, then carefully daubed herself with her grandmother’s light perfume. There had been enough taffeta left over to make a wide headband, and now she twisted and tied it around her head so that it held back her abundant curly dark hair. Catherine’s mother despaired of Catherine’s hair. She thought it made her daughter look “ethnic.” Marjorie also thought her daughter’s hazel eyes were “boring.” Only now was Catherine beginning to find another vision of herself, like a person turning from a clouded mirror to a clear one, yet caught between, unsure which reflection was the truth.

How many times had Catherine been summoned to her mother’s room dressed for some occasion, how many times had she stood, head bent obediently as her mother labored over her hair—how many times had her mother, attempting to pull that dark, willful, untamable hair into pigtails or a braid, collapsed, sobbing, head on crossed arms, at her vanity table, knocking perfume bottles sideways, the Wedgwood dish of hairpins upended, scattering its contents across the carpet, as Marjorie cried in frustration?

Catherine was a disappointment to Marjorie, who wore her thick bronze hair in an elegant French twist, who spent every day of her life making herself beautiful. In the early years, this had been the supreme fact of Catherine’s life. When, at twelve, she was sent to Miss Brill’s School for Girls in Fairington, Connecticut, she was shy and frightened. Now she was about to graduate, and it had taken all these years for her to learn that her mother’s criticisms of her had more to do with what her mother thought than with the way Catherine looked. Catherine’s best friend and roommate, Leslie Dunham, one of those easily self-confident bossy girls, was mostly responsible for changing Catherine’s opinion of herself. One spring Leslie had come down to New York with Catherine to stay with her at the Eliots’ Park Avenue apartment. They were attending a graduation party for Kimberly Weyland’s older brother. It was a big, elegant event, and they were almost hyperventilating with nervousness. Marjorie had come into Catherine’s room while the girls were dressing. She was wearing her hair up in its usual French twist, and because this was one of her overweight phases, she was wearing black, which was slimming, and lots of jewelry to distract.

“Lovely dress, Leslie,” Marjorie had said, leaning against the door, a cigarette in one hand, a whisky sour in the other. “Pretty color on you. But Catherine, darling, should you be wearing that shade of green? Don’t you think it’s a bit too Carmen Miranda? I mean, it makes me want to put bananas in your hair.”

Catherine had shrugged. She only wanted her mother to go away and let her dress in peace. Marjorie had sighed and left to freshen her drink.

The moment Marjorie had gone, Leslie said, “What a bitch your mother is! Who talks that way to her daughter? Your mother’s crazy! You never told me. Listen to me, Catherine, you look great in that dress.”

“No, I don’t. I don’t look good in any formals. My bones are too big and my boobs are too big and my coloring is too flagrant.” Catherine was perfectly matter-of-fact. This was the truth as she knew it, as she had heard it stated over and over to dressmakers and saleswomen in department stores when her mother asked for help in making her daughter look presentable.

“Your coloring is too ‘flagrant’? What does that mean? Catherine, you’re sexy. I think your mother’s nuts. I really do.”

“Oh, well, you know how mothers are,” Catherine said tactlessly, because Leslie’s mother was dead, but quickly caught herself: “Sorry.”

Catherine had shrugged again. She was amazed and grateful for this news flash from Leslie, but she was also on guard, protective of her mother, in spite of everything. It was one thing for her to think her mother was horrible, but for anyone else to say so … well, it was confusing, to say the least.