Read Evermore: A Saga of Slavery and Deliverance (The Plantation Series Book 3) Online

Evermore: A Saga of Slavery and Deliverance (The Plantation Series Book 3) 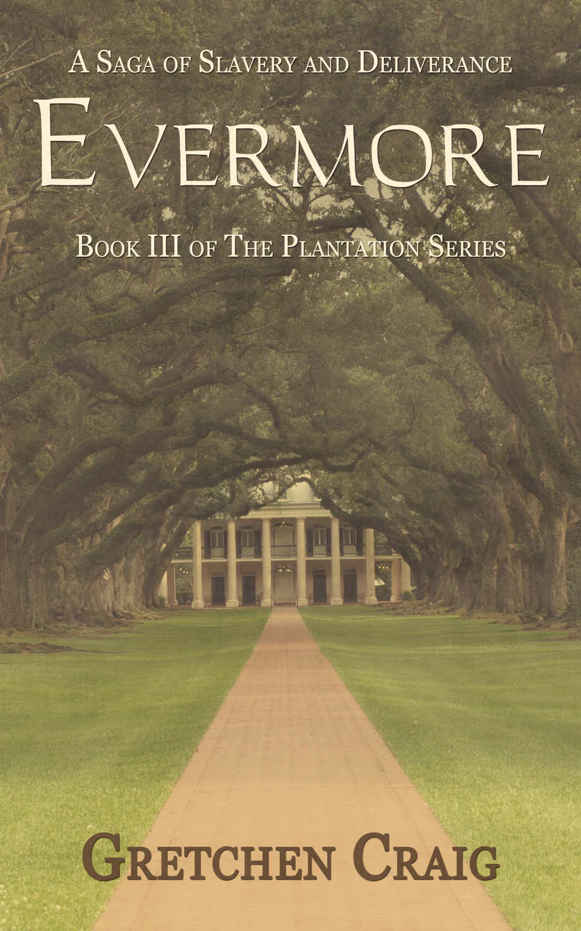 Praise for the first two novels in
The Plantation Series
:

Reviews of
Book I
:
Always & Forever

A testament to the people of New Orleans, yesterday and today.

A family saga in the grand old style, told by a master storyteller.

Rich in compelling characters, beautifully described landscapes and enough drama to keep you reading until the end.

Reminiscent of the great epic novels of early writers such as Mitchell and Steinbeck.

Reviews of
Book II
:
Ever My Love

One of the most exquisite books I have read in a very long time.

The pacing is brisk, the characters multifaceted, and the plot compelling . . . This saga is
another winner.

Doesn’t pull any punches in this ante-bellum romance. I strongly recommend Ever My Love.

A breathtaking novel that is well researched, rich in historical detail, featuring a beautiful passionate and caring heroine. . .

The Color of the Rose
Bayou Stories: Tales of Troubled Souls
Lookin' for Luv: Five Short Stories
Evermore
A Saga of Slavery and Deliverance
The Plantation Series, Book I

Evermore
Discussion Questions
Chapter One
May 1862

The good citizens of New Orleans slung insults and worse at
the Yanks marching up Canal Street, but not Nicolette Chamard. She was elated.
At last, these soldiers were going to free every enslaved soul in the South. In
an unguarded moment, she forgot herself. Her lips curved and she pressed her
hands to her heart.

Without warning, fingers gripped her shoulder, the thumb
digging under her collar bone. A filthy man with a red face and glaring eyes
loomed over her, his mouth twisted in fury.

“You wipe that smirk off your face, missy, you know what’s
good for you.”

Icy fear shot up her spine. If he denounced her as a Yankee
sympathizer, the crowd would stomp her into the ground. She wrenched free and
plunged into the mob.

At the edge of the throng, she gripped a light post and told
herself to breathe, just breathe.

She’d been careless, letting her feelings show. She knew
better. No matter that she was free or that her skin was light, the requisite
tignon she wore on her head identified her as a woman of color. And a colored
woman in New Orleans better know her place.

Her pulse slowing, Nicolette threaded her way through the
fringe of onlookers. Here, where she didn’t have to steel herself against the
dreaded touching and bumping, she relaxed her hands and shoulders.

Across from Presswood Mercantile, she looked to see if
Marcel had come to witness the Yankees claim his city. He leaned against the
balcony railing far above the rabble, his steady gaze on the liberators.
Invaders, her half-brother would call them, overturning the life of ease and
privilege he enjoyed as a rich white planter.

She resisted raising her hand to him. He would not welcome
the familiarity in front of Miss Presswood, his flaxen-haired fiancé. No matter
that they shared a deep affection, and no matter that Nicolette’s gray eyes
were lighter than his brown ones, her brother lived his life on a different
plane. Marcel’s mother had been Bertrand Chamard’s wife. Nicolette’s mother had
been a slave on the neighboring plantation.

On a balcony above the hubbub, Marcel gripped the iron
railing with white knuckles. His nose twitched at the smell of unwashed
soldiers in damp, sweat-soaked wool. He had anticipated the day Union troops
would enter his beloved city, but the impact was no less painful for having
foreseen it.

A Confederate through and through, Marcel Chamard took a
keen interest in the Yankee formations. They were neat enough, though their
uniforms were worn and sometimes more gray than blue. He excused them their
lack of polish. He even excused them the side they’d chosen. At least these men
had rallied to their cause. Too many Southern gentlemen yet lingered in the
comforts of home. Though he had not yet put on the uniform, Marcel was no
malingerer.

Deborah Ann took his arm and murmured, “Marcel.” He glanced
at his fiancé and saw the warning on her face. They were amid their enemies. He
unfisted his hands and unclenched his jaw.

Marcel spied his little sister down below. Though Nicolette
wore an ordinary blue day-dress and a matching tignon, the required cloth
folded and tied in intricate fashion over her black hair, she was a bright blue
bird among the crows and sparrows of the crowd. Marcel had never wondered that
his father fell in love with Nicolette’s beautiful mother. His sister, too, was
beautiful.

But, as she had been petted and adored all her life, she
was naïve in her understanding of slavery in the South. No doubt Nicolette
believed the Yanks would free the slaves before breakfast and turn the South
into some sort of fairy-tale Eden by tomorrow noontime.

He’d done his part in spoiling her, but no one could deny
she was an exceptional girl. Sang like an angel, with just enough of the devil
in her to seduce an entire audience. And with her coloring, he thought for the
hundredth time, Nicolette could pass for white, if she wanted to. But she chose
not to. No, Nicolette knew nothing of politics or the real issues of the war.

When Deborah Ann stepped closer to him and wrapped his arm
in hers, he patted her hand absently. His attention was still on Nicolette as
she made her way through the thinning crowd. So very careful she was not to
brush up against anyone. She thought no one knew how she shrank from being
touched, but he had watched her withdraw after the …incident. He hardly let
himself think of it in more detail than that. It roiled him and threw him into
a rage if he dwelled on what Adam Johnston had done to his baby sister, leaving
her unconscious, bleeding and bruised.

Deborah Ann tugged at his arm. Marcel blinked the image
away. He took one more look over his shoulder, annoyed with Nicolette for being
out again with no protector. What good was the slave he’d given her if she left
him at home?

Three days after the parade marking the Union occupation of
the city, Captain Finnian McKee felt he’d arrived in a paradise of blue sky and
balmy breezes. Boston had nothing like this lush growth of exotic blooms and
fragrant vines. He marched his detachment up Magazine Street, his senses open
to the scents and sounds and sights of New Orleans. Particularly the female
sights. His gaze followed a fetching belle in laces and ribbons.

“You know anything about foundries, Captain?” Lieutenant
Dobbs asked.

“And I was a book seller.” And a poet, but Finn seldom
mentioned that. Back in Boston, he belonged to the number one rowing club on
the Charles River, and he’d found the lads appreciated his stamina far more
than they did his verses.

As a Signal officer, he ought to have been seeing to his
flags and code books, but he’d riled old man Butler. When they’d dined with the
garrison commander in Key West, Finn had unforgivably monopolized and flirted
with the prettiest woman there, who happened to be seated at General Butler’s
left hand. Butler had cast a bilious, cross-eyed stare at Finn that night. This
morning Butler had taken his revenge. Get the foundry going, he’d said.

The responsibility weighed lightly on his shoulders. Though he
was no engineer, he imagined he’d figure it out, and the morning was too fine
to waste on worry.

Then a lass snapped a carpet on
the balcony above, releasing a cascade of dust and ashes on his and Dobbs’
freshly brushed blues. Compounding the affront, the girl trilled a mocking
laugh.

Rubbing at a cinder in his eye, Dobbs raised a fist to her.
“You little wh --”

Finn clapped a hand on his shoulder. “Let it go, Lieutenant.
As you well know, it could have been much worse.”

A couple of blocks back, there had been two ladies who
cursed at him and his men, one who’d even spat at them. The spitter,
before she spat, had been the picture of decorum, gray haired, the scent of
lilacs wafting from her. Finn, who was accustomed to being admired for his
tall, dark looks, had accepted the gentle lady’s smile as his due. Then she’d
hawked at him.

Once the shock wore off, he forgave the old thing. Dressed
in a black gown with black lace gloves, she might be a mother who’d lost her
son at Bull Run. Plus, he thought with a grin, the crone had missed him and his
shiny brass buttons and caught Dobbs instead.

Finn slapped his hat against his thigh to shake off the
ashes and hoped they didn’t come up on any more sullen ladies. Aware it would
take only the smallest spark to inflame the wounded pride and heated resentment
of the population, General Butler had sent down strict orders to ignore all
insults.

He led his men along the railroad tracks till at last they
passed under a wrought iron gateway that read Chamard Foundry. His good spirits
evaporated. What once must have been a well-ordered factory was now a morass of
rusting machinery. Destructive, but clever, Finn admitted.

“They sabotaged the place,” Dobbs said.

The sluice-way from the flanking stream had been directed
into the yard. Finn eyed the tangled mass of rods and vats and tools stewing in
the fetid pond. Well, his small part of the war meant putting this foundry back
to work. He blew out a resigned sigh. “Corporal Peach?”

“Take five men and get that channel back into the stream.
The rest of you, have a look around. See what you can figure out, what’s
broken, what’s not.”

“Captain,” Private Scot squeaked, pointing with a shaky hand
at a slithering shape in the water.

Finn eyed the inky black snake. They didn’t have devils like
this back in Boston, but he’d seen one in Mobile. The lad was white-faced,
scared to death of the thing. Finn, to tell it true, felt a thrum of fear in
his own gut.

“A cottonmouth, I believe, private. Don’t play with it.”

The Gladiator's Mistress (Champions of Rome) by Jennifer D. Bokal
The Proposition 1: The Ferro Family (The Proposition: The Ferro Family) by Ward, H.M.
Necropath by Eric Brown
Hero's Revenge (Keepers of Justice, Book 2) by Stone, Dee J.
Arms of Promise by Crystal Walton
The Eagle and the Rose by Rosemary Altea
Rules of Entanglement by Gina L. Maxwell
Icon by Frederick Forsyth
The Alternative Detective (Hob Draconian) by Robert Sheckley
Love Made Me Do It by Tamekia Nicole