Read Every Man Will Do His Duty Online

Every Man Will Do His Duty

BOOK: Every Man Will Do His Duty
>>DOWNLOAD HERE >>READ ONLINE NOW
ads 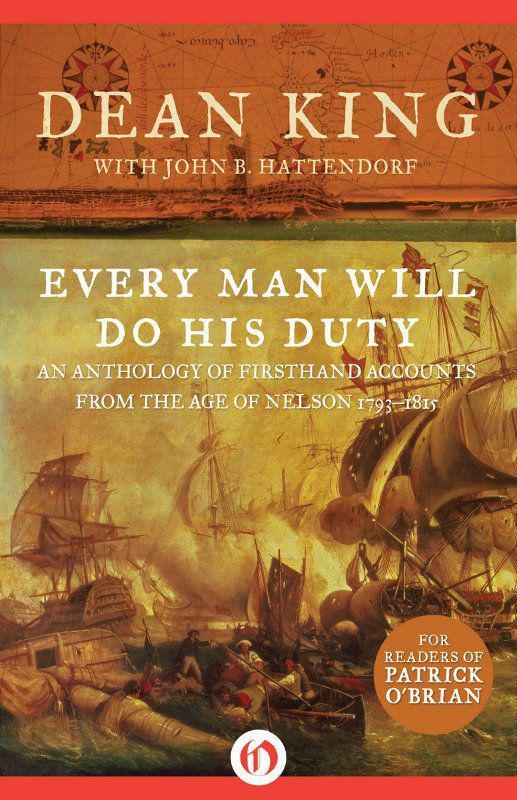 Every Man Will Do His Duty
Dean King and John B. Hattendorf

Foreword by John B. Hattendorf

Part I The War of the French Revolution

With only a silver watch and one rupee to his name, William Richardson is pressed into service while in India. He describes life on board the 48-gun frigate
Minerva
and how a mutiny was avoided; from
A Mariner of England: An Account of William Richardson from Cabin Boy in the Merchant Service to Warrant Officer in the Royal Navy [1780 to 1819] as Told by Himself
edited by Colonel Spencer Childers, C.B., R.E.

2. Commence the Work of Destruction: The Glorious First of June, 1794

On board Gambier’s speedy 74-gun HMS
Defence,
fourteen-year-old William Dillon experiences the heat of the Glorious First of June in the hellish lower deck; from
A
Narrative of My Adventures (1790–1839),
by Sir William Henry Dillon, K.C.H., Vice-Admiral of the Red, edited by Michael A. Lewis, C.B.E., M.A., F.S.A., ER.Hist.S.

3. The Noted Pimp of Lisbon and an Unwanted Promotion in Bull Bay, 1794

Sailing homeward on board the
Gorgon,
44 guns, James Gardner reports on ship life and shore leave in Gibraltar, Cadiz, and Lisbon. Along the way, French prisoners nearly revolt upon hearing the “Marseillese,” American sailors invite a brawl over a beef pie, and a deserter gets an undesirable promotion from a chamber pot; from
Recollections of James Anthony Gardner, Commander R.N. (1775–1814),
edited by Sir R. Vesey Hamilton, G.C.B., Admiral, and John Knox Laughton, M.A., D.Litt.

An itinerant merchant and naval seaman dodges the press gangs in England and describes a brief stay in London before meeting his inevitable fate; from
The Nagle Journal: Diary of the Life of Jacob Nagle, Sailor, from the Year 1775 to 1841,
edited by John C. Dann.

5. They Would as Soon Have Faced the Devil Himself as Nelson, 1796

Nelson and his shipmate Archibald Menzies, better known as the “Scotch Hercules,” oversee the evacuation of Bastia, Corsica, after Spain enters the war against Britain; from “Nelson at Bastia,” by M.C., An Old Agamemnon,
United Service Journal,
February 1841, no. 147.

In an inspired moment, Nelson deviates from the battle plan and produces one of the most unlikely triumphs of the war; from
A Narrative of the Battle of St. Vincent; with Anecdotes of Nelson, Before and After that Battle,
by John Drinkwater Bethune, RS.A.

At last, Jacob Nagle finds his niche in the Royal Navy. On board the sloop
Netley,
he is a very busy prizemaster; from
The Nagle Journal,
edited by John C. Dann.

In the Bay of Bengal, a captive merchant captain experiences a fierce battle between two powerful frigates, the French
La Forte,
50 guns, and HMS
La Sybille,
44 guns; from
A Master Mariner: Being the Life and Adventures of Captain Robert William Eastwick,
edited by Herbert Compton.

Captain Thomas Cochrane, later the tenth earl of Dundonald, and the fifty-four-man crew of the
Speedy,
14 guns, have the gall to engage and board the Spanish xebec frigate
El Gamo,
32 guns, 319 men; from
The Autobiography of a Seaman,
by Thomas, Tenth Earl of Dundonald, G.C.B., Admiral of the Red, Rear-Admiral of the fleet, Marquess of Maranham, etc.

A midshipman recounts the loss of a shipmate during a gale and horseplay in Bermuda during a lull in the action; from
The Midshipman: Being the Autobiographical Sketches of His Own Early Career, from Fragments of Voyages and Travels,
by Captain Basil Hall, R.N., F.R.S.

Dr. Beatty observes Admiral Nelson throughout his ultimate battle and reports here his words with Captain Hardy and others, including his last words; from
The Death of Lord Nelson, 21 Oct 1805,
by William Beatty, M.D., edited by Edward Arber, F.S.A.

Given an unworthy command, Captain William Dillon makes the best of an ugly situation in northern waters. In command of the brig
Childers,
against the much heavier Danish brig
Lügum,
Dillon shows his heart of oak; from
A Narrative of My Adventures (1790–1839),
by Sir William Henry Dillon, K.C.H., Vice-Admiral of the Red, edited by Michael A. Lewis.

Fifteen years after being impressed into the Royal Navy, William Richardson, now a warrant officer, participates in one of the most storied naval actions of the Napoleonic wars; from
A Mariner of England,
edited by Colonel Spencer Childers.

When first heard from in
Every Man Will Do His Duty,
Midshipman Hall was avenging the death of Shakings, a cur, on board the
Leander
in the waters off Bermuda. Five years later, having recently passed for lieutenant, Hall witnesses an awesome sight, the Battle of Corunna, and assists in the embarkation of retreating British troops; from
The Midshipman,
by Captain Basil Hall.

Beset by four French ships, HMS
Junon,
38 guns, fights courageously and her captain is fatally wounded. But for the
Junon
’s Lieutenant Jackson, this is just the beginning of a wild odyssey through the French prisons of Verdun and Bitche and back home again; from
The Perilous Adventures and Vicissitudes of a Naval Officer, 1801–1812; Being Part of the Memoirs of Admiral George Vernon Jackson (1787–1876),
edited by Harold Burrows, C.B.E., F.R.C.S.

A former U.S. Navy seaman, James Durand is impressed by the British, is wounded in battle, and discovers a novel way to ease the burden of service; from
James Durand: An Able Seaman of 1812, His Adventures on “Old Ironsides” and as an Impressed Sailor in the British Navy,
edited by George S. Brooks.

Part IV The Napoleonic War, Continued, and the War of 1812

During the bloody battle between the
Macedonian
and the
United States,
Samuel Leech fights the
Macedonian
’s fifth gun on the main deck and loses some of his mess; from
Thirty Years from Home or A Voice from the Main Deck,
by Samuel Leech,

Down on his luck, George Little, an American seaman, turns to privateering and his luck grows worse. A story of fighting, cannibals, and prison; from
Life on the Ocean; or, Twenty Years at Sea: Being the Personal Adventures of the Author,
by George Little.

Sent to the South Pacific to protect American whalers and to wreak havoc upon British shipping and whaling interests, Captain David Porter runs up the coast of Chile and Peru to the Galapagos Islands in his mighty little frigate
Essex;
from
Journal of a Cruise Made to the Pacific Ocean by Captain David Porter in the United States Frigate Essex, in the Years 1812, 1813, and 1814.

The
Phoebe
’s Captain Hillyar is a friend of Captain Porter’s. In earlier days, Porter spent many pleasant hours with the Hillyar family in Gibraltar. Yet Hillyar’s mission is to destroy Porter’s frigate, the
Essex.
Far from home waters, the tension mounts as the two frigates lie anchored in a neutral port; from
Journal of a Cruise Made to the Pacific Ocean by Captain David Porter.

Lieutenant William Bowers cruises off southwestern England and then takes a land tour on the other side of the Channel; from
Naval Adventures During Thirty-Five Years’ Service,
by Lieutenant W. Bowers, R.N.

Notes on the Texts

T
HE EDITORS WISH TO
express their gratitude to Jessica King for her editorial input, to J. Worth Estes for his suggestions for works to be included, and to Adam Merton Cooper for his excellent maps and battle charts. They would also like to thank John C. Dann for permission to use material from
The Nagle Journal
and the Navy Records Society for permission to reprint selections from
Recollections of James Anthony Gardner
and Dillon’s
Narrative of My Adventures.
The Henry E. Eccles Library of the Naval War College and the library of the New York Yacht Club generously made available the books from which many of the selections in this volume are excerpted. Once again, our sincerest thanks to David Sobel and Jonathan Swain Landreth at the Victualling and Ordnance Board and Jody Rein, our prize agent.

T
HE EDITORS OF THIS VOLUME
started out with a shared interest in the historical novels of Patrick O’Brian, particularly his series of eighteen Aubrey-Maturin books dealing with the Royal Navy in the wars of the French Revolution and Empire, 1793–1815. O’Brian’s work, like all the best historical fiction, both draws strength from and sheds light on its chosen era. It has a well-researched historical framework around which the author develops his characters and builds his plot, slipping seamlessly between fact and fiction. Ideally, the work raises curiosity and deeper interest in the historical period in which the novels are set. With that in mind, we produced
A Sea of Words,
a general guide to the historical background and the technical language used in the novels. Then we went on to produce
Harbors and High Seas,
a geographical companion to the series with new and period maps. Both works were designed to help readers better understand the historical setting and technical references that O’Brian uses in his novels.

Another Time, Another Life by Leif G. W. Persson
Talk of the Town by Anne Marie Rodgers
Story of Us by Susan Wiggs
Various States of Undress by Laura Simcox
The Phantom of Manhattan by Frederick Forsyth
Mr. and Mrs. Monster by Kelly Ethan
La excursión a Tindari by Andrea Camilleri
Sword Play by Emery, Clayton
Kingston Noir by Colin Channer
Rebel of the Sands by Alwyn Hamilton