Read Every Woman for Herself Online

Every Woman for Herself 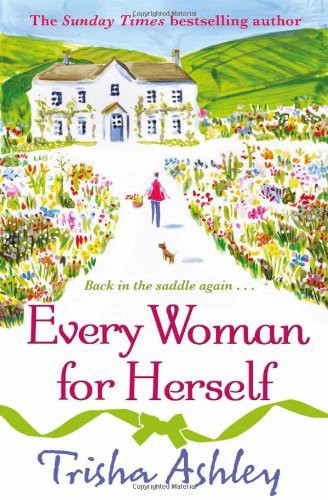 TRISHA ASHLEY
Every Woman For Herself

For my father, Alfred Wilson Long, with love.

Chapter 2: Wrong in the Attic

Chapter 3: All Panned Out

Chapter 6: Pesto in the Kitchen

Chapter 9: Nature in the Raw

I’m delighted that Avon are reprinting
Every Woman for Herself
, because I have to admit it’s still my favourite literary child – and it’s obviously a favourite with readers, too, since not long ago they voted it one of the top three best romantic novels of the last fifty years, a great honour.

I haven’t rewritten it, merely tweaked a couple of errors into shape, brushed its hair and made sure it had a clean handkerchief, so since it was first published by Piatkus in 2002, it’s obviously very much of its time. But then, think how relaxing it will be to visit a remote Yorkshire valley with no phone signal for miles and only a dodgy dial-up internet connection. The Brontë family managed quite well without them and I hope you will too.

Got up at the crack of dawn to kill the Fatted Breakfast before driving Matt to the airport, only to discover that aliens had stolen my husband during the night and substituted something incomprehensibly vile in his place.

I expect their replicator was having a bad day. I distinctly remembered marrying a gentle, long-haired, poetry-spouting Jason King lookalike with a social conscience, but what was facing me over the breakfast table was a truculent middle-aged businessman, paunchy, greying, and flaunting a Frank Zappa moustache seemingly edged with egg yolk: but I knew better. The alien snot was the clincher.

It was not a pretty sight, but fascinating for all that.

I went to peer into the kitchen mirror to see if
I’d
changed as well: but no, I still looked like a miniature Morticia Addams.

‘Charlie,’ the Matt creature said impatiently, ‘did you hear what I said? About wanting a divorce?’

I certainly had; what did he think had ripped the veils of delusion from my eyes? But I was temporarily deprived of speech as almost a quarter of a century of married life flashed before my eyes in Hogarthian vignettes:
Flake’s Progress
.

The inner film came to a jerky halt. ‘Yes,’ I said finally, nodding. I understood.

Unfortunately my memory was not of the selective kind, a cheery sundial remembering only the happy hours, so my recollections were freely punctuated with loss. Lost mother, lost virginity, lost babies, lost husband, Lost in Space.

Charlie Rhymer, this was your life.

For some reason, Matt seemed disconcerted by my reaction. ‘We’ve grown apart since I’ve been taking these foreign contracts, and I’ve come to realise that this will be best for both of us. In fact, we can divorce right away, since we’ve been separated for more than two years.’

‘How can we be separated when you’re here?’ I asked, trying to get my head around this concept.

‘But you’re back for quite long holidays between contracts – and you said it would be better if
I
stayed here.’

‘You would have hated it – you know you don’t even like leaving the house, let alone the country.’

‘But that’s just York – it’s got the wrong sort of outside. I’m fine at home.’

‘I meant Upvale, and Blackdog Moors.’

‘You seemed eager enough to run away from it with me.’

‘That was love, and unplanned pregnancy, and Father.’

Matt said earnestly, ‘Charlie, it isn’t that I’m not still fond of you …’

He ignored that; I’m not sure he even heard it, like most of the things I say.

‘It’s just that I’m not getting anything out of this marriage,’ he continued.

‘You make me sound like a bank. What were you expecting to get out? More than you put in?’

‘At least there are no children to complicate things,’ he said, which was a very low blow. He was starting to make me feel quite sick.

‘I’m sorry it’s come to this, Charlie, but we really can’t go on. I’ve been offered a long contract in Japan, and I can’t afford to continue maintaining two households.’

‘But the house … the mortgage?’ I said, my brain starting to limp onwards a bit, now the first shockwave had broken over my head. ‘What will happen?’

‘The divorce will go through quickly if we’re both in agreement – my solicitor will send you things to sign. Then I’ll pay you maintenance every month, so you won’t have anything to worry about. The solicitor will get in touch with you and explain everything.’

‘Will he? Is that what you’ve been doing this week, organising our divorce? Why didn’t you talk to me about it, instead of suddenly handing me a
fait accompli
on your last morning home? After all, I haven’t done anything, have I?’

‘No, you haven’t done anything,’ he agreed curtly. ‘Perhaps that’s just it. I’ve moved on, and you haven’t. Other women have families and careers and interests. Perhaps now you’ve turned forty, it’s time you got out there in the real world.’

I’d been cocooned for the twenty-three years of my married life, and now suddenly I was to be ripped from my chrysalis and told to make like a butterfly?

He rose from the table. ‘I’ll ring you from Saudi, once you’ve had time to think it over.’

Questions were already beginning to bubble scummily to the surface, like: when did he see this solicitor? How long had he been planning this? What does he mean, he’ll give me maintenance? Was there some other woman behind this? Who on earth would want him?

‘Hurry up and get the car out,’ snapped Alien Nation in a reasonable impersonation of my husband, ‘while I get my bags.’

It certainly was. I went into the conservatory, locking the door carefully behind me. Although it was so tiny, once I was in the middle where my easel and table were, you couldn’t see me for jungle plants.

Palms, bamboo and bananas, and a fig tree in a big pot … Dense foliage and warm, slightly steamy, air.

Matt banged on the glass a few times like a deranged moth, shouting, but I disconnected, picking up a brush and carrying on painting the tiny, naked, cowering figure at the heart of the rampant forest. It looked like Steve, the handsome young gardener at the park, and something threatening was
definitely
lurking in the undergrowth.

Probably me: I often had lustful thoughts about him when I went there to sketch in the greenhouse, but in reality there was not enough cover to drag him behind, even were he willing – and it was one of those ironic facts that as you age you lust after fewer and fewer men, and those are the very ones who wouldn’t look twice at you. When my last birthday date-stamped me forty, I knew the writing was on the wall.

I really should have sown my wild oats before I got married, because I feared it was now too late.

Sometimes, too, I wondered if my body wouldn’t have rejected my pregnancies if they hadn’t been fathered by Matt. Now I knew he was an alien, perhaps, I thought, our genes were incompatible.

Too late for that, as well.

Much later I resurfaced to the sound of a familiar loud thud and yelp as Flossie, my spaniel, attempted to walk through the glass door again. But at least if she’d come out of hiding it meant Matt had finally gone.

Flossie was not big on brains, but she
had
grasped that Matt hated her, and it was safest to keep out of his way. Of course she forgot sometimes, especially when overcome by greed, like the previous morning, when she was drooling over his feet at breakfast, and he kicked her when he thought I wasn’t looking.

Afterwards I went up to the bathroom and gave
all
my big silver rings a vigorous cleaning with his toothbrush and a bit of powdered floor cleaner. The rings came up a treat and I expected his teeth would, too.

Flossie now sat in the dining room outside the conservatory door, looking dazed, though this is not unusual. She wagged her tail happily when she saw me coming.

The breakfast debris still littered the table, and Alien Nation had left a note pinned down by the teapot that said he’d had to call a taxi, and if he missed the connection it was my fault.

There was also the name and address of the solicitor who would explain everything to me.

I wished someone would.

Why did I never seem to grasp anything until a couple of years after it had happened? I never knew where I was going, only where I’d been.

As Joni Mitchell says, you don’t know what you’ve got till it’s gone. I only knew what I had to start with.

Or did I only know what I
thought
I had to start with? Or did I have what I thought I had, but had somehow swapped it for an alien? Could living with me for so long have
turned
him into an alien?

He was right about one thing – he’d changed, but I didn’t think I had very much.

Clearly, that was my mistake.

I took stock of my innermost feelings and discovered there weren’t any: I was a blown egg, all shell and void.

You might have heard the sea if you’d put your ear to me, but that was about it.

Chapter 2: Wrong in the Attic

Lay awake all night with my mind doing hamster-in-wheel impersonations, then came groggily down the following morning to find a letter from Matt’s solicitor.

Wasn’t this indecently fast? The letter said that since Matt and I were in agreement (
were
we?) and there were no children of the marriage, I didn’t need to have my own solicitor: just sign on the dotted line when asked to, and don’t make a fuss.

The only good thing Matt’s sudden bombshell did was to make me realise that he
had
turned into an alien, and an elderly one at that. Otherwise, who knew how long it would have taken for me to realise that I was beginning the slow trek through that long, rocky hinterland before fifty, hand in hand with a grumpy old man? (And as Sherpas go, he’d have been no Tensing.)

A day or two later Matt phoned, his usual bossy self, and basically instructed me just to do as I was told, and he would see me right financially.

That would be a novelty.

And there was definitely an underlying threat there …

I’d finished the painting: miniatures of looming menace, my speciality.

When I lived on the moors among all those vast spaces I painted long, narrow landscapes where tiny figures were set like random jewels. But once transposed to the claustrophobia of a city (even one as beautiful as York), I began painting ever-smaller canvases in which the minute figures cowered under threatening jungle foliage.

Truly Tasteless Jokes One by Blanche Knott
The Secret Circle: The Captive Part II and The Power by L. J. Smith
Betrayal: Whitey Bulger and the FBI Agent Who Fought to Bring Him Down by Fitzpatrick, Robert, Land, Jon
Giving Up the Ghost by Max McCoy
Death on Allhallowe’en by Bruce, Leo
The Portable Door (1987) by Tom Holt
Uncle Janice by Matt Burgess
Lost in a Royal Kiss by Vanessa Kelly
Pachucha tirando a mal by Alfonso Ussia
Waiter Rant by Steve Dublanica