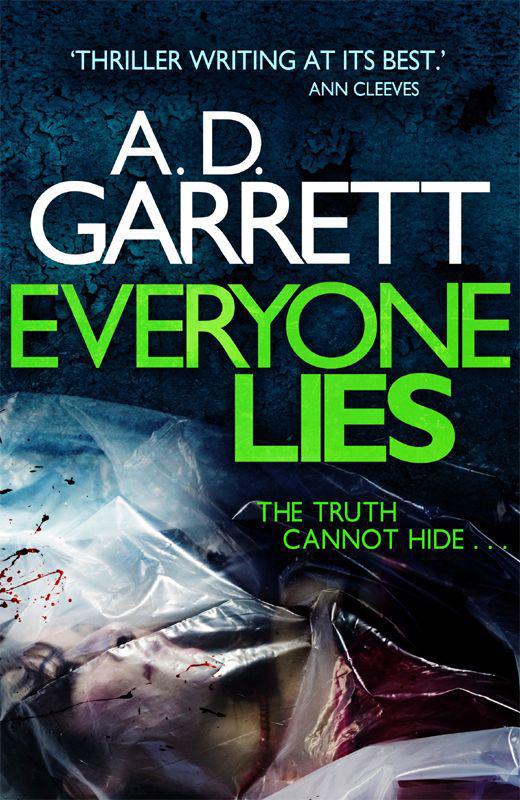 A. D. GARRETT is the pen name of writing partnership Margaret Murphy and Professor Dave Barclay. Murphy, the author of nine internationally acclaimed psychological thrillers and founder of Murder Squad, is a former Chair of the CWA. World-renowned forensics expert Professor Barclay has worked on some of Britain’s highest-profile murder cases and alleged miscarriages of justice including the Millie Dowler and Soham murders.

First published in the UK by C&R Crime,
an imprint of Constable & Robinson, 2013

Published in this paperback edition by C&R Crime, 2013

The right of A. D. Garrett to be identified as the author of this work has been asserted by the author in accordance with the Copyright, Designs and Patents Act 1988.

Every effort has been made to obtain necessary permissions with reference to copyright material. We apologize for any omissions in this respect and will be pleased to make the appropriate acknowledgements in any future editions.

This book is dedicated to forensic scientists and crime analysts.

With sincere thanks to: Rachel Bowman-Sayle for advice on BCUs, FIDOs and The Dark Side; the Latvian Institute for details of Latvian traditions and rituals; Chief Inspector Dave Griffin (retd.), for the bar code quote. Finally, and very importantly, The Royal Literary Fund – a lifeline to writers since 1790.

She calls the man Vilkacis, which he likes, but only because he doesn’t know what it means. Just a few stripes, he said, and she agreed, because all the girls do it, and he gave her a secret word to say if she wanted him to stop. It was nothing, the first time, and the time after that: three quick stripes, which hardly hurt at all. He was kind, and called her beautiful. He gave her twenty extra and some medication that made the little pain go away altogether.

The third time he did hurt her. And she said the secret word, but maybe she didn’t say it right, or maybe he changed it, because he didn’t stop; he went on and on, and even when she screamed the secret word and begged him –
begged him
– he wouldn’t stop. It took a lot of medication to make the pain go away that time.

It seems foolish now, but then, she didn’t know the name for this medication. Later, on the street, she learned to ask for scag, smack, candy, the goods, because on the street it’s all about business. But when it’s on the spoon and you’re cooking it down, you can call it people’s names: Henry, Helen, Brother, Boy – like family. And when you’re fixed up, and everything seems washed in mellow light, she’s Golden Girl. But not for long, because heroin is a Judas, a bad friend who betrays you. It is a cruel lover who goes away and makes you crazy for him. You need it more than you need oxygen, it screams in your head,
Feed me! Feed me!

Her friends call it the monkey on your back. They’re wrong. It is wild, ferocious; a beast that howls and claws and tears your flesh. The pain of the whipping and the need for the drug got tangled up together a long time ago, and now she can hardly tell them apart. Except when the need returns.

She swore he would never hurt her again, but still she lets the man Vilkacis flay her for pleasure, and all she thinks is how good it will be afterwards, when the beast is quiet.

Vilkacis has introduced a new game which he calls chequers, and now she is webbed with cuts and the pain is like fire. Heroin creates the need, but it also makes the pain go away, so when he is finished with her, she crawls off to shoot up in filthy places like this, with no sheets on the bed and stains on the mattress.

Surrounded by dirt and plaster dust and human faeces, she uses antiseptic wipes to clean her hands and the injection site and her spoons. She has two – one to crush the gear fine so it dissolves properly. She brought a bottle of water with her, and expensive citric acid she bought from the pharmacy, because the juice in the plastic lemons gets full of spores and can make you go blind. Even here, in this worst of all places, even as the beast howls and tears at her insides, she takes care. Because somewhere on the way down there’s a place of perfect balance, when the pain is only a gentle warmth radiating from her skin, and the need is quiet. In these brief moments, she thinks about her family, and what she’s lost, and even after the terrible things she has done it seems possible to make everything right.

She flicks her lighter flame under the spoon – not too much – she doesn’t want to burn off any of the precious liquid. The drug dissolves easily; there’s hardly any crap to filter, and she knows the hit will be sweet. She adds a cotton bud, then, crooning softly to steady her nerves, she takes the cap off a clean syringe and draws the liquid through the cotton wool. Injecting is the sweetest part, and even the anticipation begins to calm her. She has looked after her veins, so they look after her. She finds it easily, watching as the needle goes in, welcoming the tiny prick of pain as the sharp point pops through first the skin, and then into the blue snake of vein. She takes a slow breath, pulls back the plunger just a fraction. A tiny jet of blood spurts into the browny-yellow fluid in the barrel. Her mouth floods with saliva as she slowly depresses the plunger, watching the blood-swirl crawl back into the needle, back into her. When it is all inside her, she pulls out more blood and then eases the plunger back in a second time to wash the last traces of the drug into her bloodstream. Thoughtfully, she withdraws the needle and waits for the howling to stop.

‘A trivial example of observation and inference.’

Monday morning, 9 a.m., in A12 lecture theatre, Robert Gordon University, Aberdeen. Small and slightly cramped, certainly not the best lecture theatre on the St Andrews Street campus, but Professor Nick Fennimore liked it, and always asked for it. The walls were clad in ochrestained pine, and the seating, gently raked, ran six to a row either side of the aisle. There were several curious burn marks on the floor near the demo bench – relics of his famous ‘Petrol Makes a Good Fire Extinguisher’ demo.

Today, fifty students were seated or slouched in the tiered seating, chatting, texting, sleeping off the weekend’s hangovers. The fluorescent light reflecting off ochre walls added to the jaundiced pallor of the serious Union Street club-goers. The last few drifted in just before nine and began shedding jackets and hats and scarves. Aberdeen in winter was no place for dressing down.

Nick Fennimore was forty-two, though he could pass for thirty-five. Above average height, but not exceptionally tall, he was lean, with strong, broad hands that were more calloused than you would expect to see in a forensic scientist. He kept his dark brown hair short. Whether teaching, or visiting crime scenes – even working in ditches with the soupy remains of corpses – he wore suit and tie. Not because there was a dress code for staff – Fennimore was one of only two people in the building who regularly turned out in business wear – but after years of working with the police, that was how he felt most comfortable. He cleared his throat, the murmur of voices subsided and, after a last-minute scramble for seats, he had their attention.

‘What’s the most powerful tool available to a forensic scientist?’

These were first-year undergrads, several months into the course, and some of the shine had been rubbed off them. He got a muttered, slightly pained, ‘DNA’ in response.

‘Really?’ he said. ‘The top 10 per cent of Hibernia’s brightest young minds, and that’s the best you can do?’ This was Fennimore’s preferred approach: flattery wrapped up in an insult.

Some of the more combative types sat up a bit straighter, but nobody offered an alternative.

‘A straw-coloured liquid.’ This from a dark-haired lad with a short goatie.

‘Interesting.’ Fennimore frowned at his laptop which stood open on the long demonstration bench. Still frowning, he looked at the contents of the test tube. ‘It
looks
like wee. It’s in a test tube that we use for testing wee. But you’re not willing to hazard a guess that it
is
wee?’

‘Because. It wouldn’t be very scientific.’

‘Not unless they know all the facts.’

Fennimore smiled. ‘Sadly, we rarely know
all
the facts. What I
think
you mean is that you believe I’m not above staging a set-up to catch out some poor alcohol-fuddled first year, and you’re not falling for it.’

The goatie smirked, enjoying the attention.

‘Fair enough.’ Fennimore held the test tube up to the nasty white glare of the low-energy lights. ‘Okay – for the record – this is indeed urine. The problem with DNA and urine is you’d be lucky to get a few epithelial cells from the urethra. So DNA isn’t likely to help you identify the urinator – even if this is an assault case and the assailant peed on the victim – and that particular perversion is not a discussion point in this lecture.’ It wasn’t meant to shock, it was merely a statement of fact.

‘So, coming back to my original question, our most powerful tool is …’

‘Observation.’ Josh Brown – interesting on two counts: that he was here at all; and that Fennimore hadn’t seen him. But Josh Brown had the knack of being in a room without being noticed – until he wanted to be noticed. Now, it seemed, he did.

The subject of this lecture was ‘Observation and Assessment’. The title was listed in their course schedule and it was projected from his laptop onto the screen behind him.

‘Correct,’ Fennimore said, ‘but you don’t get full brownie points on account of the BIG FAT CLUE.’ He glanced over his shoulder at the lecture title, and a few of his audience groaned at their oversight. Fennimore slapped his head and in a fair impersonation of a generic student, said, ‘Mondays. Nightmare!’

They shuffled and grinned, and one or two of the girls even laughed.

He nodded to the AV tech in the glass booth at the rear of the hall. A second screen lit up on the wall to his right, projecting an image of the rack of test tubes, magnified a metre high.

A tawny-haired girl on the third row raised her hand. ‘They’re different colours?’ Only lately arrived from one of the smaller Hebridean Isles, she was good, but not convinced of her worth, yet.

Embarrassed, she said, ‘Well, you can see.’

‘We can all
see
, but can you
observe
?’ he said, paraphrasing Sherlock Holmes.