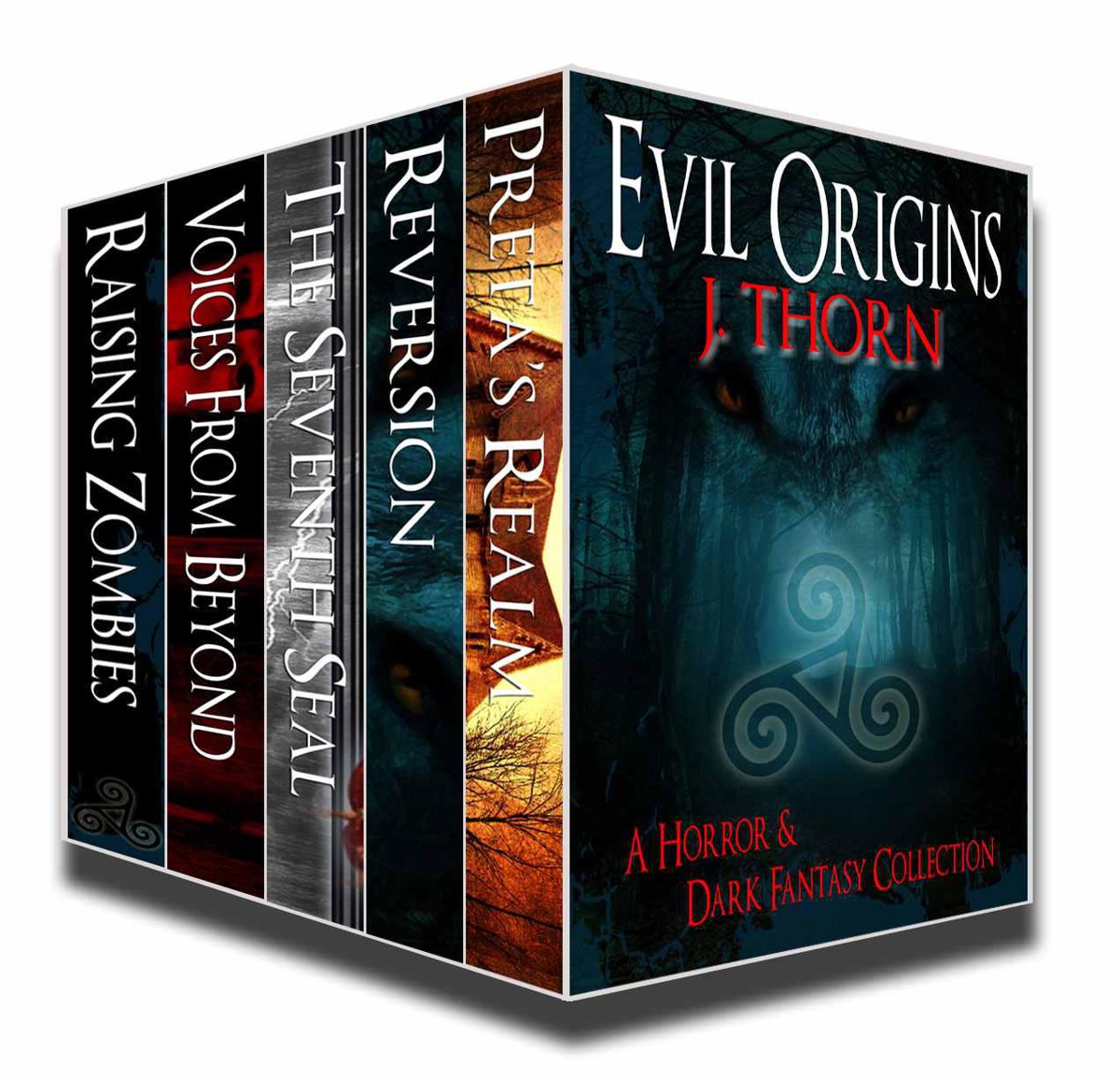 All rights
reserved.  No part of this book may be used or reproduced in any manner
whatsoever without written permission except in the case of brief quotations
embodied in critical articles and reviews.

This
collection is a
work of fiction. The characters, incidents, places, and dialogue are drawn from
the author's imagination or are used fictitiously, and are not to be construed
as real. Any resemblance to actual events, locales, or persons, living or dead,
is entirely coincidental.

Reversion: The Inevitable Horror (The Portal Arcane Series - Book I)

Preta's Realm: The Haunting (Book 1 of The Hidden Evil Trilogy)

Voices from Beyond: Volume
1 (A Horror/Dark Fantasy Short Story Collection)

J. Thorn believes in the imaginative power of the
horror novel and the escape from reality it provides. He knows that embracing
the entire spectrum of human emotion, even its dark realms, makes for a more
meaningful and authentic life.

"This is a great start for what promises to be an engaging, intense series."

"...I was immediately hooked...Atmospheric, excellent writing and a story that draws you in."

Claire Ridgway
Author of
The Fall of Anne Boleyn

"If you're seeking a really good book to curl up with, I highly recommend it! Make sure you have no other plans as once you start reading, you won't be able to put it down."

"...yet again I have been enthralled."

(The Portal Arcane Series - Book I)
By J. Thorn

All rights
reserved.  No part of this book may be used or reproduced in any manner
whatsoever without written permission except in the case of brief quotations
embodied in critical articles and reviews.

This book is a
work of fiction. The characters, incidents, places, and dialogue are drawn from
the author's imagination or are used fictitiously, and are not to be construed
as real. Any resemblance to actual events, locales, or persons, living or dead,
is entirely coincidental.

For those
who seek redemption, may you find it.

The most beautiful thing we can experience is the mysterious. It is the source of all true art and all science. He to whom this emotion is a stranger, who can no longer pause to wonder and stand rapt in awe, is as good as dead: his eyes are closed.

Samuel
pushed the twisted sheet from his shoulder and let the makeshift noose coil on
the ground like a dead snake. He stepped out of the rope and looked up at the
decaying branch overhead. Samuel shook his head, his eyes darting about the
empty forest as his heart raced in his chest.

He
drew a breath, exhaling slowly and wincing at the pain in his throat as his
lungs tried to pull in more oxygen. He smiled from the joy of being alive until
the memory of his prison cell wiped it from his face. Like a leaf at the mercy
of the wind, the image of the bars floated from Samuel’s reach. Worry rushed
back in to fill his mind as he struggled to find a connection, a reason for
being here.

He
stepped over the jagged rocks and closed his eyes. Silence. It could have been
midsummer. It could have been the dead of winter. He could no longer tell, and
even if he could, Samuel struggled to remember what those labels meant. The
wind was still, nothing but a whisper. The creek in the distance murmured like
the whispers at a funeral procession. The insects, the animals; the creatures
of the wood fell silent. Again, Samuel fought to recall hearing any sound. A
leather string holding an amulet lay on the ground at his feet, and Samuel
picked it up. The charm was silver, three triple spirals connected and curling
in on each other. He slid the leather string over his head until the amulet lay
on his chest.

He
walked over branches sprawled on the ground and onto a rough path that wound
itself farther into the forest. The sun hung at an odd angle, tossing a bland
shaft of light ahead, with most of the rays never reaching the ground. Samuel
looked to the right and saw the tattered, yellow tape dangling from the trunks
of ancient oaks.

Profane
and yet sacred, the final resting place of those who could go through with it. He
reached out and tore a shred of tape from the tree.

Samuel
looked up into the canopy of branches, which hovered overhead like a worried
mother. As far as he could see, ropes and nooses hung empty and cold. Humps and
forms lay beneath some.

He
continued down the path, knocking aside a shoe, a sport coat, a backpack.
Eventually he stopped and bent down, the aching in his neck causing him to
wince. The backpack was made of nylon, the zipper long gone and its teeth
forever in a black grin. He reached into it, his fingers brushing against a few
leaves that rustled inside. Nothing. He turned it over to reveal three
characters embroidered on the front: BCD. He rubbed his head and stared at them
until he could recognize them as letters of the alphabet, and a thin smile
spread over his lips. He was not sure if those letters mattered anymore, and he
could not recall why they ever would have.

Samuel
threw the only remaining strap over one shoulder and shuffled farther down the
path. The creek moved closer with each step, and he was happy to hear its
meanderings. The natural noise brought a brief sense of normalcy, a memory from
childhood: long summer days in a valley and a creek cut a ragged line through
the forest. Some days he would spend hours in solitude, overturning rocks in a
search for salamanders. On other days, he would throw stones across the bank
with his brothers in a friendly competition that would end when his mother’s
voice echoed through the trees, calling them home for the evening meal.

He
saw more items strewn across the path and kicked a pair of shoes to the side. So
many shoes. He wondered why the shoes remained and the bodies did not.

The
path curved as it approached the stream, turning right into a grove of high
pines, their needles covering the ground. Samuel drew a deep breath through his
nose, catching the faintest odor of pine, and that made him smile. He savored
the distant aroma for as long as he could. It did not last.

He
sat on the ground next to an abandoned, blue shopping bag and reached inside,
pulled out the contents, and arranged them in a circle over the pine needles. He
remembered the names for most of them. Lighter. Pen. Nickel. A few he could not
recognize, but his brain assured him he would. Samuel picked up the lighter
with his right hand, pinched between a thumb and finger. Muscle memory snapped into
place as his thumb struck down on the flint. The lighter sparked, and Samuel
smiled. He could almost taste the burnt, woody smoke of a hand-rolled
cigarette. He could almost feel the airy buzz with each inhalation of the
tobacco. He struck the lighter again and again, but each time it failed to
ignite, and each time it reminded him of the temporary satisfaction delivered
by the nicotine. Another item returned to his expanding repertoire of old words
becoming new again as he opened a supple, leather wallet.