Read Exiled: Clan of the Claw, Book One Online

Exiled: Clan of the Claw, Book One 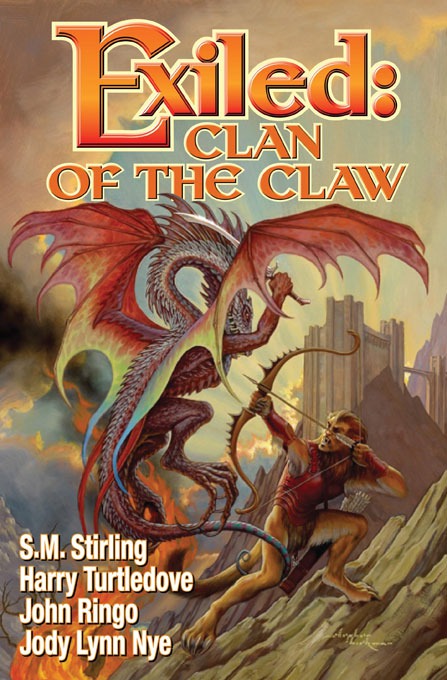 CLAN OF THE CLAW

the war between the provinces series

Down in the Bottomlands
(with L. Sprague de Camp)

The Prince
(with Jerry Pournelle)

The Rising • The Privateer • The Independent Command

the general series (with david drake)

The Hero
(with John Ringo)

There Will Be Dragons • Emerald Sea • Against the Tide • East of the Sun, West of the Moon

into the looking glass

empire of man (with david weber)

View from the Imperium

The Ship Who Saved the World • The Death of Sleep

The Ship Who Won • Planet Pirates
(also with Elizabeth Moon)

Exiled: Clan of the Claw

To Midnight, Lila and Cassandra

T
he Mrem are descended from cats, just as humans share an ancestor with apes. Which brings up the question as to why would any carnivore need intelligence. Squishy, tasty humans needed to evolve brains in order to find dinner and not be it. But with tooth and claw, why be smart too?

The ancestors of the Mrem faced just as great a challenge as we hairless apes did. It occurred simply because there are few asteroids in their solar system. Asteroids? Huh? Going a bit astray here? Actually it is straightforward. With no asteroid hits, there would be no great extinctions and the age of reptiles would never have really ended. Given tens of millions of extra years one of the descendants of the first reptiles would have reacted to their own fierce competitiveness by very slowly developing both their own kind of intelligence and more. Other creatures, even herd animals, would too have needed to develop better defenses and had time to do so. Mammals would have evolved, too, but always under pressure from the cold-blooded, reptilian Liskash.

The Liskash ruled unchallenged for literally millions of years. They developed a basically static society based upon local dominance by the mentally most powerful male. Then came the ice ages. In the colder northern plains, useless and ignored by the Liskash, the Mrem evolved from pack hunters to intelligence. At first the Liskash were slow to react. They saw the furry upstarts mostly as a source of slightly more superior slaves, and occasionally food. The Mrem fought back, as pack hunting cats would, forming fiercely independent clans.

At the end of the current ice age there are hundreds of Mrem clans all competing for the same limited grazing lands. The clans rarely cooperated. The population grew much faster than the glaciers retreated. There came a time when there was not enough land to support all the clan’s herds. Clans who could not keep or take grazing land starved. The battles between clans were fierce. So vicious that some clans chose to face the Liskash, living demons, and move south.

Then the entire world literally changed. A massive valley—picture our Mediterranean Sea as a dry basin—has sat through the now ending ice age as a warm, lush and Liskash controlled jungle. Some of the valley is hundreds of feet below sea level. Mrem tribes, the most aggressive or those driven out, have begun to also live in this valley. Some have even emerged to the cooler steppes south of it. But as the ice melts the seas are rising and in the east the great ocean finds an opening.

Suddenly a wall of water surges as the small width of land that had been holding the rising ocean out quickly erodes away. Within days the jungle becomes a sea. Tens of thousands of Mrem and hundreds of thousands of Liskash die. Those clans trapped south of the new sea find themselves outnumbered by Likash lords that have ruled there since beyond memory. The Clan of the Claw begins what was to be known as the Great Trek. Their only hope for survival as other than brain-dazed slaves is to march around this new sea and return to the Mrem-controlled northern steppes. Forced to cooperate, the other clans join them in the march or wait to join and assist in keeping the way open. The Trek and what the Mrem learn from it change their culture forever, starting them on the road to civilization.

This is the story of the Great Trek.

And the demons held fast to the Lowlands. Brother fought brother. Yet He saw their plight and spoke to Her that was the land.

“Give back to the grasping sea that which you have taken,” Aedonniss asked. “For from that hot land they will enslave the true people.”

“This will lessen me, so you as well,” the goddess of the earth protested.

“So it must then,” the sky god spoke. “Many will be lost, but more will be saved. Better we are less, than every dame and kit a slave.”

And so it was that with a trickle, then torrent, and finally as a great tide Assirra willfully sacrificed much of her domain to the sea.

—The Book of Mrem, verse seven

R
antan Taggah stared north across the arms of the sea—the New Water, the Clan of the Claw called it. His lips narrowed, so that the tips—well, more than the tips—of his fangs showed. Like the rest of his clansmates, the talonmaster called the New Water other things, too: things as foul as he could think of. An angry growl rumbled, down deep in his throat. The New Water was much too likely to mean death, not only for him but for all the Clan of the Claw, which meant for all the Mrem trapped south of it.

A fly landed on the tuft atop one of his upstanding ears. The ear twitched, but the fly didn’t leave. He scratched his ear, shooting just the tips of his claws from their sheaths. The fly buzzed away. His ear twitched again, as if reminding it not to come back.

High above the salt-smelling water, a sea bird circled, hunting. No, not a bird: the long, drooping tail said it was a flying Liskash. The leatherwing folded its wings and plummeted, striking the sea like a spearpoint. A moment later, it flew off again, a fish writhing in its toothy jaws.

Where one hunter had luck, others might hope for more. That was a rule everywhere and for everything and everyone: leatherwings and birds, mammals and meat-eating Liskash, Liskash nobles and Mrem. A second flyer dove at the water, visions of a full belly doubtless dancing in its narrow skull.

Something
reared up out of the sea to greet it—something far bigger, far fiercer, far toothier. That enormous mouth opened and closed. Rantan Taggah stood too far away to hear the crunch of breaking bones with his body’s ears, but it was sickeningly loud in the ears of his mind. A leatherwing was far from enough to sate something that size, but snacks were always welcome.

The sky god didn’t answer. Rantan Taggah hadn’t expected him to. Aedonniss looked for his folk to take care of themselves and not waste his time. He was a hard god…but then, it was a hard world, and getting harder all the time.

Mrem who’d lived by the Old Water spoke of the savage reptilian monsters in the sea when they came inland to trade or to raid. Like any other inlander, Rantan Taggah listened to the tales. Why not? They were an entertaining way to make time lope by. Just because you listened to a story didn’t mean you had to believe it. He’d discounted most of what the seaside Mrem claimed.

Now, though, he’d had the chance to see the ocean monsters for himself. The really alarming thing was how little the talespinners exaggerated.

He snarled. No, the
really
alarming thing was that he’d had the chance to see the ocean monsters for himself. He hadn’t gone traveling. On the contrary—the ocean had come to him.

Some few Mrem priestesses and learned males had always claimed the great depression by whose southern edge the Clan of the Claw dwelt was an ancient seabottom. With a great part of the world’s water tied up in sheets of ice, land advanced while the sea retreated. Now the glaciers were melting, shrinking, as if ensorceled; and, as the world warmed, water in the oceans piled higher and deeper.

Piled higher and deeper…and sometimes spilled. For as long as the Mrem could remember (and, surely, for longer than that), the Quaxo Hills to the east had held against the Old Water, held it out of the Hollow Lands. Rantan Taggah, now a male in his prime, had just been coming out of kithood when the Quaxo Hills held no more.

On My Way to Paradise by David Farland
The Officer Says "I Do" by Jeanette Murray
Dionysus (Greek God Romance Book 1) by Alicia Wolfe
Xeno Sapiens by Victor Allen
The Sea and Civilization: A Maritime History of the World by Lincoln Paine
The Burg and Other Seattle Scenes by Jerome Gold
Gun for Revenge by Steve Hayes
A Fire Within (These Highland Hills, Book 3) by Kathleen Morgan
Tender is the Night by F. Scott Fitzgerald
Spy Games: Birthday Games by Downing, Mia