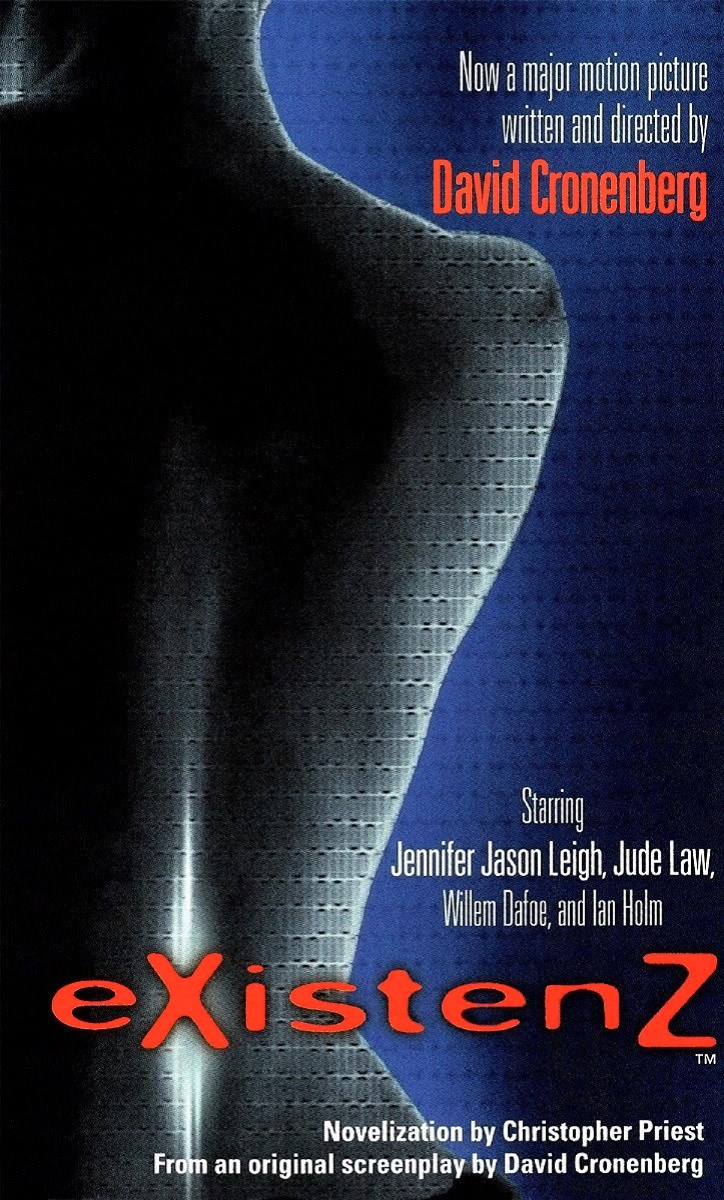 A WORLD WHERE FANTASY IS MORE REAL THAN LIFE ITSELF

You are in a society where game designers are superstars and players can organically enter their favorite games . . . A society where no one is more desired than Allegra Geller, the hip gaming goddess whose latest system,
eXistenZ,
takes a quantum leap beyond anything ever imagined—tapping so deeply into its users’ fears and desires that it blurs the boundaries of reality.

Fleeing an assassination attempt from Anti-eXistenZialists determined to destroy the game and its creator, Allegra finds an ally in Ted Pikul, a young executive turned novice security guard sworn to protect her. Seeking shelter within her creation, Allegra persuades Ted to play the game, and the fugitives find themselves in a phantasmagoric world where existence ends and
eXistenZ
begins, a fantastic place where nothing is as it seems and the villains are all too real—and all too deadly.

A Division of
HarperCollins
Publishers

eXistenZ and EXISTENZ and design are trademarks of Alliance Atlantis Communications Inc.

Used under license. All rights reserved.

First HarperEntertainment printing: May 1999
Printed in the United States of America

Something buzzed and fluttered against Ted Pikul’s chest, feeling like a large winged insect. With his mind on other things, he swiped at it absently, flapping his fingers with an irritated motion across the crisply starched fabric of his shirt. In the dark it was impossible to see if anything flew or dropped away from him, but the insistent drumming of the wings ceased.

Pikul took a deep breath in the warm night air and for the tenth time in as many minutes stared apprehensively around at the vehicles crammed into the weed-overgrown parking lot.

Only a dim overhead lamp illuminated the vehicles, creating a large but pallid pool of light around the ones closest to the entrance to the old church hall. The vehicles were almost all of the sort you’d see in any small country town: most were pickups and trucks streaked with mud or rust, or both, and many had doors or fenders held on with wire. Great rolls of chicken wire, anonymous-looking plastic sacks, or battered agricultural implements were heaped on the flatbeds behind the drivers’ cabs.

One vehicle stood out prominently in this undistinguished company: a gleaming late-model Land Rover Defender 110, which had seven seats, a roof cage, and a winch hanging off the front.

Sitting behind the wheel of this car was another Antenna Research employee, Frances McCarrigan, to whom Ted Pikul had been told to make himself known as soon as he arrived. He had done so. Frances, a retired lady farmer who sometimes picked up a few extra bucks moonlighting as a chauffeur, had acknowledged his arrival with an absent glare.

The thing buzzed once more, in the same place on his shirtfront. Pikul flapped anxiously at it, but this time remembered what he’d put in his pocket.

He reached in and pulled out the pink-fone. It vibrated a third time while he held it. He fumbled it around in his fingers and turned toward the dim light spilling through the doorway that led to the interior of the hall. The design of the pink-fone was so subtle and understated that it was difficult to work out which way it should be held. It was state-of-the-art palm-sized bioware, fashioned from the latest in modular thermoplastics and programmed with genetically enhanced enzyme circuitry. The plastic was soft, and felt warm to the touch.

He squeezed the sides, as he’d been shown by his boss, Alex Kindred, head of PR at Antenna Research. They squelched silently in his grip and a diffuse pink light swelled up from deep within it.

“Er—hello?” he said, into what he believed was the receiver.

“Pickle?” said a sharp voice against his ear. “Is that Theodore Pickle?”

“Put Pickle on. The security guard. Why the hell isn’t he there?”

“It’s the Antenna security office here. You were supposed to call in at ten minute intervals. What the devil’s going on out there?”

“Has Allegra Geller shown up?”

“Yes, sir,” Pikul said, with a glance at the Land Rover. “She’s taking part in the software presentation right now. With . . . with all the other representatives from Antenna. Sir.”

“Don’t call it software, Mr. Pikul. How long have you been with us?”

“Long enough to know the song,” Pikul recited from the company manual. “I’m sorry, sir. I meant that she’s presenting the game system.”

“Okay, we always pay attention to detail at Antenna. Now, why aren’t you with her, Pikul? She’s the one you’re supposed to be protecting. You want me to send replacement security staff down there if you can’t handle it?”

“No, sir. I can handle it okay. I’ve been following instructions, but I thought I should run one of my periodic checks on the outside of the location. I’ve surveyed the area, and confirmed that all our security expectations are in place. I was about to rejoin Ms. Geller when you called.”

“Right. Check back in here in ten minutes. You got that, Pikul?”

The pink light faded from within the fone and Pikul carefully slipped the plastic instrument into his shirt pocket, trying to remember which way was up. The next time it buzzed he didn’t want to have to fumble with it.

He pulled the electronic security wand from his belt, then stepped quickly across to the highway beyond the parking lot. He looked in both directions. To the right, leading south, the road ran off into indeterminate landscape; you couldn’t see much in the light from the half-moon. To the north, a line of mountains ran jaggedly against the star-filled night sky.

It was a hot night, the warm winds blowing in from the hundreds of square miles of farmland that lay all around. Pikul looked wistfully at the shape of the distant mountains, thinking of cool air and crystal-clear mountain streams.

With one more inhalation of the fragrant country air, and another pensive glance in the direction of the mountains, Pikul walked swiftly back to the building and made his way inside.

It had once been a simple country church, but was deconsecrated years ago. In recent times it had been used for dances, community meetings, elections, and the occasional political rally.

Pikul had been told the hall was typical of those where Antenna tested their product for market evaluation: it was in a remote country area with a high percentile of known Antenna users, the hall was familiar with everyone in the locality and was cheap to rent, and in addition it was an unobtrusive place for Antenna’s top VR people to gather. You couldn’t be too careful these days.

The whole interior was well-lit, but large mobile lights had been wheeled to the front to illuminate the platform at the far end.

Pikul spotted Allegra Geller standing at the back of the crowd. She was dressed to blend. Her clothes were modest and conservative—a dark blue jacket over an Antenna Research T-shirt; slim jeans on her shapely legs; her hair was long and fair—but there was no disguising the sheer intelligence and beauty that radiated from her no matter how she stood, or spoke, or looked.

When he’d been briefly introduced to her, half an hour earlier as the Antenna people began arriving, Pikul could hardly believe his luck at being assigned to her on his first security commission. This was a first not only for him, but also something of a first for her too. Although Allegra Geller was famous, it was mostly through rumor and hearsay. She had rarely been allowed into public by Antenna, and apart from a few small photographs accompanying magazine articles carefully leaked over the last two years, her face was all but unknown. For both these reasons Pikul was in awe of her, even though the few words she’d uttered to him when they met had been friendly enough. So far. Pikul never doubted his unfortunate ability to say exactly the wrong thing at the wrong time.

He went and sat down in the chair that had been placed next to the main entrance. He laid his security wand across his lap.

The temperature had risen in the hall while he’d been outside: it was not only several degrees warmer, but the emotional atmosphere being pumped out by the crowd was noticeably more frenetic. Their responses had been deliberately whipped up from the platform by some rousing speeches and corporate displays; now they were ready for the product pitch.

One of the Antenna operatives, Wittold Levi, a man in his early forties, was standing to one side of the platform, facing the crowd. He held a short piece of white chalk. Next to him, a large chalkboard rested on a tripod.