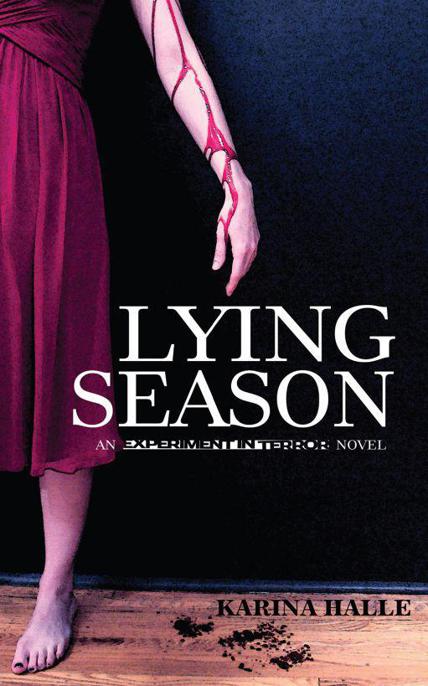 BOOK #4 IN
THE EXPERIMENT IN TERROR SERIES

Smashwords Edition License Notes:
This ebook is licensed for your personal enjoyment only. This ebook may not be re-sold or given away to other people. If you would like to share this book with another person, please purchase an additional copy for each recipient. If you’re reading this book and did not purchase it, or it was not purchased for your use only, then please return to Smashwords.com and purchase your own copy. Thank you for respecting the hard work of this author.

This is a work of fiction. Names, characters, places, and incidents either are the product of the author’s imagination or are used fictitiously. Any resemblance to actual events, locales, or persons, living or dead, is entirely coincidental.

For more information about the series and author visit:
www.experimentinterror.com

PRAISE FOR THE EXPERIMENT IN TERROR SERIES

“
Perry and Dex are two charismatic and slightly crazy characters that carry you in kicking and screaming along for the ride.” – Naughty Between the Stacks

“
I don’t think, short of being completely ridiculous, I can encourage you more strongly to read this series. It has quickly moved to the top of my favorites list.” – The Bookish Babes

“
A ghost hunting adventure with original characters guaranteed to please!” – Romancing the Darkside

“
Seductively entertaining…I’m convinced that it has some secret ingredient (like the sauce on a Big Mac or the coffee beans at Starbucks) that makes it immediately addictive.” – Bitsy Bling Books

For the dogs of my life: Duke, Ellie and Muffin

“
Tell me about the accident, Perry.”

I barely heard what the doctor said. I was busy staring out the window of his office, watching the leaves of the oak tree outside waver in the spring breeze. It wasn’t quite five o’ clock but the sun was already setting, creating a harsh orange glow behind the buildings of downtown Portland. It caught the edges of the tiny symmetrical leaves, making each one look like they were tinged with flames, that slow burn towards the middle.

But they weren’t on fire, were they? No, they only looked like it.

I tore my eyes away from the window and gave Dr. Freedman the nastiest look I could muster. His skinny, narrow face was aglow with the fiery light, but like usual, I couldn’t tell what he was thinking. He had that stupid noncommittal look of a psychiatrist; that patient, patronizing stare that never gave anything away. All of that was scribbled away on his notepad.

“
Where the fuck do you think I am?” I sneered at him.

He merely nodded and looked down at his precious notepad. “Just checking, Perry.”

“
You’re always saying my name,” I said, and looked back at the window. The sunset’s flames had turned each new, green leaf into a burst of crimson. I could figure out why he was always saying my name; I guess shrinks thought they had to constantly remind their patients who they were. Well, I knew who I was. What I didn’t understand was why I was there. Why I was
really
there. No pretenses.

“
So, tell me about the accident,” he said, careful to leave out my name this time.

A strand of my neon blue hair fell down in front of my face and I examined it carefully. It looked dry and brittle; the bleach job I did a few months ago had done nothing but damage the core. That was the first thing my mom had said, “Not only do you look like a punk, but you’ve ruined your gorgeous hair forever.” I was glad it hurt her more than it hurt me. It was her fault that I was here. Not some accident.

I looked through my hair; it created a gauzy blue curtain and I liked the fact that I couldn’t see Dr. Freedman clearly through it. It made it easier to deal with him.

“
You tell me about the accident, doctor.”

He nodded again to himself. I wished he was the one on fire, not the leaves outside.

I flinched. I didn’t know why.

“
Why is he no longer your friend?”

“
You know why. He turned creepy. After the party…”

“
After the party? Last time you said he got ‘creepy’ before the party.”

“
How did you first meet?” he continued.

The last time I was here, he asked me the same question. I don’t know why I always had to repeat myself and I didn’t understand his fascination with Jacob. It really wasn’t that interesting.

I took in a deep breath, letting him know how annoyed I was with my sharp exhale and told him the story. Again.

Jacob was a skid. Jacob was 18-years old. Jacob failed the 12
th
grade probably a million times. Jacob had a really tall black Mohawk that was held together by numerous packages of Knox Gelatine. Jacob always wore a studded denim vest with a black D.O.A patch on the back. Jacob was kind of always D.O.A himself. He was always in trouble with the police, with his parents, with his schoolmates or with his friends. And he thrived on this trouble. He’d wear black lipstick to school and try to kiss the jocks. Jacob was always asking to get beat up. He was a martyr to the skids and I’m pretty sure he thought he was a martyr to humankind. But the truth is, even though there were parts of me that admired him, that respected his nature to piss off authority, to be true to himself, and be fearless (there were even parts that found the black lipstick to be sexy), Jacob was just kind of an idiot.

“
Were you in love with him?” Dr. Freedman asked, so casually, as if the topic of love was as important as whether I preferred chocolate ice cream or vanilla.

“
No,” I said adamantly. That was the truth. I barely knew Jacob. Like I said, I admired him a bit and when he talked to me, at first anyway, I would get giddy about it. But I got giddy when any guy looked my way. It was so easy to overlook the fat girl.

“
But you liked him enough.”

I was walking home from the bus stop one day. Normally I would have taken my car to school but my parents had confiscated it from me. Something to do with drugs, I don’t know.

Anyway, I was walking home, listening to my MP3 player, when a tall, spiky shadow appeared beside me. It was long because the nights were longer then and it was just getting dark enough to put me on my guard.

I could tell the person was speaking to me but I couldn’t hear them above the music. I don’t know why people have to talk to you when you’ve got headphones on; I mean, come on.

Finally I looked over and saw it was Jacob. I stopped, surprised and pulled out my earphones.

He was dressed as he always was. A true skid.

“
What are you listening to?” he asked.

“
Alice in Chains.
Music Box
,” I replied, rather proudly, thinking he might approve.

“
They’re all right. I mean, they were all right. Kind of a shame about Lane though. That fucker is irreplaceable. But he was too smart for the band anyway.”

I wasn’t sure what was so smart about Lane considering he died because of drugs, but I hadn’t been too smart either. Then I noticed Jacob’s wrists. They were wrapped in thick bandages.

“
You said Jacob had tried to kill himself?” the shrink asked me, his words cutting through my memory.

“
That’s what they said. Everyone at school,” I told him. “Earlier that week, there were rumors that Jacob had killed himself. Killed himself over some girl. Some even say he burned himself in a car. Lit the fucking car on fire. And I never saw Jacob at all that week, so I believed it. But then there was no news of a funeral or anything, no news anywhere really, so I started to think it was just a rumor. One probably started by himself, another martyr cry or something. He’d often disappear from school for even weeks at a time.”

“
But the wrists told you otherwise.”

The Real Watergate Scandal: Collusion, Conspiracy, and the Plot That Brought Nixon Down by Geoff Shepard
Taking the Knife by Linsey, Tam
The Admirals' Game by David Donachie
The New York Stories of Elizbeth Hardwick by Elizabeth Hardwick
Girl Heart Boy: No Such Thing as Forever (Book 1) by Ali Cronin
Absolution (The Protectors, Book 1) by Sloane Kennedy
Catch Your Death by Voss, Louise, Edwards, Mark
Curse of the Egyptian Goddess by Rayns, Lisa
Death of A High Maintenance Blonde (Jubilant Falls Series Book 5) by Debra Gaskill
Reluctantly Alice by Phyllis Reynolds Naylor