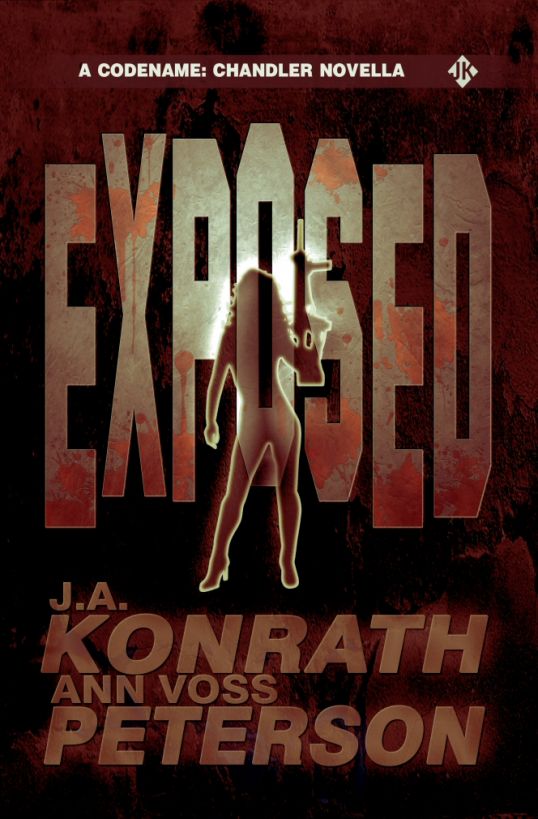 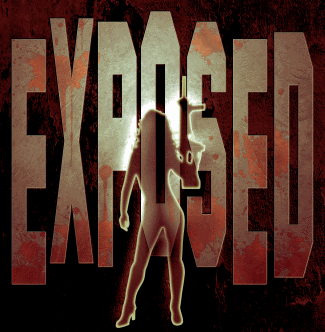 She’s an elite spy, working for an agency so
secret only three people know it exists. Trained by the best of the
best, she has honed her body, her instincts, and her intellect to
become the perfect weapon.

Before special operative Chandler was forced
to
FLEE
, she
executd the most difficult missions—and most dangerous people—for
the government. So when she’s tasked with saving a VIP’s daughter
from human traffickers, Chandler expects the operation to be by the
numbers…until she uncovers a secret that will endanger the entire
population of New York City, and possibly the world.

About EXPOSED and CODENAME: CHANDLER

Also by the Authors

PARIS IS A BITCH, by Barry Eisler

Don’t blame her. It’s in her blood.

Her eyes open to the steady
beep … beep …
beep
of a heart monitor machine.

She’s in a hospital bed. Alone. Wearing one
of those flimsy gowns.

She has no idea how she got here.

An overdose? Did she take too many downs?

She concentrates, tries to remember.

Her last memory is of …

Walking somewhere. To the dealer?

No. To the free clinic. Ashamed, hoping her
STD was something that could be treated with a pill.

She talked to three different doctors. They
took her blood. Made her wait a long time.

A shot. They gave her a shot. She touches the
spot on her arm, then notices the IV tube snaking from the back of
her hand, the sensor pads stuck to her chest.

They gave her a shot, and now she’s in the
hospital?

She glances around the room. White walls, no
window, not even a television. This place doesn’t smell like a
hospital. It smells like a garage.

She looks for a call button, can’t find one,
and then begins to yell for the nurse.

Was anyone there at all?

She sits up, feeling absolutely normal. No
pain beyond the tug of the needle in her hand. No dizziness. So why
is she here?

She’s thirsty. She has to pee. She needs to
know what’s going on.

Using her fingernails, she picks the edge of
the tape on her hand, then peels it back and tugs out the IV,
wincing as the blood beads up. Then she reaches under her gown and
tears the sticky pads from her skin.

The machine by her bed stops beeping, giving
way to a sustained tone. Like someone just died.

Still no one comes.

There’s a drawer next to the bed, but her
clothes aren’t in it.

She stands, the white tile cold under her
bare feet, and pads over to the door.

This isn’t a hospital.

It’s a warehouse. A big warehouse, with
concrete floors, steel walls, forty-foot ceilings. There are pieces
of medical equipment on carts, several tables and chairs, some
cages along the far wall, and …

Lots and lots of dead people.

Many are in white lab coats, stained with
blood. Others are in what look like military fatigues, equally
soaked in red.

A dozen. Maybe more. Lying on the ground.
Propped against a chair. Sprawled out on a table. Two crimson
figures, arms around one another, bruised faces forever frozen in
agony.

Then the smell hits her.

She chokes back a sob and begins to run, past
the cages, which are filled with—dead monkeys?—heading for a door
at the other side of the building, praying it isn’t locked,
skidding to a stop when it suddenly opens wide and an army guy
stands there with a big rifle pointed her way.

“There’s been an attack,” he says. His eyes
quickly scan her, stopping on her hand. “You’re bleeding.”

She glances down at her hand, where the IV
needle had been. A slow trickle of blood snakes down her index
finger.

“Hold still,” he orders. Then he pulls
something off of his belt, and before she can react he’s spraying
her hand with some sort of foam. It dries almost instantly, forming
a hard crust.

“A liquid bandage. Quickly, come with
me.”

He has an accent she can’t place, but she
doesn’t care where he’s from. He’s there for her, there to help
her. She takes his gloved hand, and he leads her outside, into the
blinding sunlight.

Water laps a shoreline to the left and to the
right.

She smells salt riding the air, the scent
familiar. The Atlantic Ocean.

There’s a sound, too, beating in her ears, a
helicopter on a landing pad, its blades whirling. The soldier nods
at the two army guys standing guard and then takes her to it.

She’s scared, confused. But she wants to get
out of here, to get away from all the dead people. As they buckle
their seatbelts, she’s very close to crying. Then the soldier
smiles at her.

His words surprise her. She thinks she must
look terrible. That tacky gown. No make-up. Her hair all messed to
hell. But she knows she’s pretty. She’s been getting by on her
looks since she was twelve.

“I want to be a model,” she says. It’s a
weird thing to say, but she doesn’t want to talk about the dead
people.

He nods, appears to think it over. Then he
says, “You know, I have a friend, works for a modeling agency. I
bet he could help you.”

“Really?” This has to be the most surreal
moment in her entire life, and she almost wonders if it’s all a
dream.

“Do you have family? Someone who would be
worried about you?”

She hesitates, then shakes her head.

“I’ll call my friend. You can stay with him.
He’s very famous. Did covers for
Vogue
and
Elle
. He
rescues models all the time.”

The chopper lifts off and zooms over water. A
larger island unfolds beneath them, Long Island, the vague haze of
New York City barely visible in the distance.

Despite not wanting to think, she wonders
what’s going on. Why she’s here. Why all those people are dead.

She wonders if they cured her STD.

But all of that pales in comparison to what
the army guy said.

She came to New York to get discovered.

Now, maybe, she finally would be.

Several years ago … before I had to FLEE
…

“
To a special operative like yourself,”
The Instructor said, “it can be tempting to rely on your physical
training and strength. But some missions will call for more than
that. Many times, knowing how to fit into your surroundings,
understanding human behavior, and plain old acting skills will be
more effective than brute force. Learn to be a chameleon, and you
have a better chance of being successful.”

I have always preferred formulating my own
explosive with household chemicals to creating a smoky eye in the
makeup mirror. So when I pulled the barely-there dress and
four-inch Jimmy Choos out of the FedEx package the bellman had
brought up to my hotel room, my stomach gave a nervous flutter.

Not a good sign in a spy who had been trained
to control her emotions.

I returned the cell phone to my ear and
frowned, hoping my new handler could sense my attitude as it
bounced off New York City’s cell towers.

“So where does this op take place, Jacob? A
strip club?”

He laughed, the sound a slightly robotic,
electronically disguised version of his real voice.

Not that I’d ever heard his real voice.

“If you want, I can call around, see if any
of the area clubs have an amateur night.”

I couldn’t help but smile, at least a little.
Jacob and I hadn’t worked together long—this was only our third
operation together—and I was still trying to figure out if I
trusted him. On the positive side, I was a sucker for humor.

But that didn’t mean I appreciated his
fashion sense.

“I can’t conceal a weapon in this outfit. You
realize that, right?”

Pushing my dark hair over one shoulder, I
held the dress against my body with my free hand and peered into
the Manhattan hotel room’s mirrored closet door.

Okay, so it was hot. Damn hot.

Maybe I could make due with a knife strapped
to the inside of my thigh.

It would have to be a very short knife.

“You can’t be carrying. They’ll search you
before they let you inside.”

“And my cell phone? Where am I supposed to
stash that?” Jacob had just sent me a new encrypted cell, and I was
under strict orders to keep it with me at all times, no exceptions.
It was even waterproof, so I could take it into the shower.

“Did you notice the bag? Check the lining.
Like the dress, it’s been prepared for you.”

I took another look in the box. A small,
cross-body purse lay at the bottom, black sequins and tassels. I
opened it, running my fingertips over the interior and feeling the
familiar shapes of two rolled bills and two small wires. I had
emergency cash and lock picks sewn into the hems of all my
clothing. Being prepared wasn’t only for Boy Scouts.

Miss Match by Erynn Mangum
Safe in His Arms by Renee Rose
The Accidental Duchess by Madeline Hunter
The Autumn Diaries by Maxxwell, Lexi
The Killer's Tears by Anne-Laure Bondoux
Scarface by Andre Norton
Over the High Side by Nicolas Freeling
Fourmile by Watt Key
The Supernaturalist by Eoin Colfer
Venom and the River by Marsha Qualey