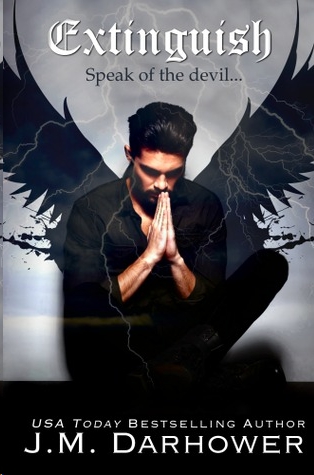 Extinguish
is a work of fiction. Names, characters, places and incidents are the products of the author's imagination or are used fictitiously. Any resemblance to actual events, locals, or persons, living or dead, is entirely coincidental.

Published in the United States

Except as permitted under the US Copyright Act of 1976, no part of this publication may be reproduced, distributed or transmitted in any form or by any means, or stored in a database or retrieval system, without the prior written permission of the author.

To my mama, who shines brightly above, a twinkling star in the vibrant night sky. I miss you more than words can say.

"Whatever is done for love always occurs beyond good and evil."
-Friedrich Nietzsche

Cold air crept through the small school playground, stirring the abandoned swings on either side of Serah. Once alive with children's carefree laughter, all that could be heard now were the sounds of desolation: the metal chains creaking and clanking as the crisp, earth-toned leaves on the trees crinkled in the thrashing wind, mixing with the menacing, high-pitched noises streaking through the atmosphere, the hisses and clangs only she could hear.

The skin of Serah's arms and legs prickled as she trembled, pushing her brown hair from her face when it flew into her eyes. Her long summer dress flapped in the wind, darkened with filth, obscuring the pretty peach it used to be. Once proper and polished, she'd been ripped apart, tainted with sin and covered in dishonor.

How had it gotten that far? How had she fallen so fast, so hard?

The answer to her question appeared right in front of her face.

She sensed him before she saw him, felt his presence like the bitter breeze. He smelled like lit matches, crackling fire with a hint of peppermint. The electricity in the air intensified, the sky stirring, a red and black swirl of clouds blocking the much-needed sunlight. A storm was coming on fast, and that storm had a name.

Serah gazed across the playground as he stepped out from behind the worn metal slide. Although he was yards away, she knew he'd heard her when she whispered his name. Tall, dark, and handsome, while overtly cliché, was the only way she could begin to describe him. His short, dark hair was a wild mess of thick curls, his long-sleeved button-down shirt exposing hints of a solid chest. With broad shoulders and tanned skin, Lucifer appeared sturdy yet harmless, his dimpled half-smirk almost friendly. With just one look, one measured curl of his lips, he invited you in to stay forever. And there was no denying this charismatic creature. While maybe not Heaven, he was certainly
home
.

But his eyes told another story, a far different one, more angry and sinister, just stealthily disguised by charm. Once as
bright blue as a summer afternoon, now they burned black and red like the fiery evening sky, a small glimpse of the festering monster beneath the pretty skin.

"Stop this," she said, her voice a soft breath. "Please."

He stepped forward, moving closer. Serah shuddered violently as the air around her grew frigid, like he’d claimed every speck of warmth for himself. Her heart frantically raced in her chest, so fast and hard it hurt, a jackhammer brutalizing her ribcage.
Thump, thump, thump
. It was a sensation she hadn’t felt until recently—not until him, not until
this
.

He stood there, stoic, statuesque as he gazed at her. The sky continued to churn, sporadic fat raindrops starting to fall. One splattered his skin and sizzled as it evaporated into a puff of steam.

The sky was crying acid tears.

"Lucifer, they're going to—"

"Then why?" she asked, pleaded, begged for an answer she’d understand. "Why are you doing this?"

He hesitated, taking one more step toward her, his hands clasping the chains of her swing. Leaning down, he pressed his feverish forehead against hers and stared into her eyes, searching for something, as she equally sought out the truth in his.

After a moment, he let out a deep sigh. Pressing his lips to hers, he kissed her softly, sweetly, an innocent gesture for a creature they called "The Devil."

A pocket full of posies;

We all fall down."

The two little girls collapsed into the lush green grass. The blonde one, seven-year-old Emily Ann Dryer, kicked her feet with joy, while her brunette best friend, Nicki Marie Lauer, laughed gleefully alongside her. Their classmates ran around them, playing and shouting, enjoying every second left of midday recess.

"Isn’t that about the plague?" Hannah asked, cocking her curly blonde head to the side as she studied the kids. "The Black Death?"

"Maybe," Serah replied, swinging gently back and forth on the center swing. "Or maybe it’s just a nursery rhyme."

"Either way, it’s absurd," Hannah said. "It makes no sense."

"That’s the point." Serah watched as the girls stood back up and grasped hands, spinning around in circles again. "It’s supposed to be silly."

Serah glanced at the swing beside her as Hannah’s attention shifted away from the kids. She gazed into the cloudless afternoon sky, her eyes focused directly on the sun. Her red dress glowed under the sun's strong rays, her wings nearly see-through as they shimmered, a shield of gold glitter in the air surrounding her.

Just then, a little boy ran by—Johnny Lee Smith, age eight—and grabbed ahold of Nicki's long ponytail. He yanked it hard, pulling her away from her best friend and throwing her to the ground before running away again.

Sighing, Serah snapped her fingers. Johnny skated to a stop and whirled around, pausing for a fraction of a second before racing to help Nicki back to her feet.

It's the basic things—love, respect, and compassion—that make the biggest difference sometimes. The little boy and girl shared a smile before going their separate ways again.

"You should be sainted," Hannah said. "I couldn't deal with these tiny, fickle creatures every day."

"There are worse things out there," Serah reminded her. "Besides, kids are the easiest. They still have consciences."

"Is that why you wanted this job?"

The girls rejoined hands and returned to their game as if nothing had happened.
Resilient creatures, kids. Serah had been elated to take on the task of watching over them—a task most of her kind didn't understand or appreciate. "They give me hope. Reminds me why we all do what we do every day."

"I could say the same about the grass and the trees, but you don't see me volunteering for gardening duty, do you?"

Serah laughed. "I don't see you
volunteering
for anything."

A bell rang in the distance. The children all bolted for the school building, rushing right past them, a few even knocking into their swings. No one looked their way or suspected their presence, oblivious to the angels lingering in the schoolyard.

They were only seen when they wanted to be seen.

As the children obediently lined up to go to their classrooms, something stirred in the air. The vibrant sun disappeared behind a sudden dense cloud covering, the blue sky darkening to the shade of midnight.

"Are you doing that?" Serah asked, looking above.

Hannah slowly shook her head. "It's not supposed to storm today."

They jolted in harmony as thunder roared, deadly lightning flashing across the sky. The kids shrieked, startled by the shift in weather, before rushing indoors to beat the oncoming rain.

Somewhere out there, an angel had fallen today.

The two teleported home the same time as countless others, a vast expanse of glowing land on a different plane, far out of human reach. Frantic whispers coursed through the pure white air as they took personal roll call, making sure their friends were all there, Grace still intact.

Hannah flowed through the group, trying to find answers, while Serah took up residence along the outskirts, her eyes scanning the crowd for her brothers and sisters. It was impossible to keep up with everyone as thousands upon thousands of their kind descended. It was rare they gathered together like this—only during times of immeasurable desperation.

And desperation, at that moment, was a severe understatement.

An angel falling, to them, was the greatest tragedy. They were supposed to be unshakable, their faith unwavering, their strength unparalleled, but when one of their own tumbled from their proverbial pedestal, lost to earthly transgressions, it served as a stark reminder that even the invincible weren’t immune to the temptations of sin.

Hannah reappeared. Serah stared at her, wide-eyed. Few things affected them—they felt no hunger, no cold, no physical pain—but even angels weren't ignorant to fear. They were trained to sense it, to detect the smallest hints of danger surrounding them. "Who was it? Who fell?"

Reaching over, Hannah grabbed Serah's hand and squeezed reassuringly. The two of them had been side by side since the beginning. They'd watched in awe together as God made the universe, watched in fascination as He created man,
and watched in sorrow as that creation persecuted His son.

And together, they
'd watched in horror as one of their own turned against their Father, bringing down many of their kind along the way.

"I can sense all of the Virtues," Hannah said, visibly relaxing. "It wasn't one of us that fell. We're all okay."

Serah stood frozen, wishing she felt the same relief. Something deep inside of her churned, an expanding void, a connection missing. It was as if a limb had been severed, a part of her slowly but surely ripping away.

A gasp tore from her chest as the link in the chain brutally snapped. "I think it's—"

The chorus of whispers ceased as the strong, male voice interrupted. It reached far and wide, detached and stoic, but the sound of it carried devastating heartache through the crowd. Serah especially felt it, confirming her emptiness.

Slowly, she turned and came face-to-face with Michael behind her, his massive iridescent wings twice the size of everyone else's. The
appearance of an Archangel sent most of the others apparating back out of there within seconds, but Serah didn't move. She couldn't. Not yet.

It couldn't be Samuel. It had to be a mistake.

Michael's gaze trailed over what remained of the crowd before settling intently on her. Sympathy shined from his blue eyes, his handsomely chiseled face burdened. "I'm sorry."

If Serah were capable of crying, tears would've streaked her ashen face then. Samuel—her brother, her best friend—had fallen.

Heather Graham by Arabian Nights
Everything is Changed by Nova Weetman
The Fold: A Novel by Peter Clines
Taking The Heat by S.D. Hildreth
Next World Novella by Politycki, Matthias
Trainstop by Barbara Lehman
The Story of the Greeks (Yesterday's Classics) by Guerber, H. A.
Obsessed by Jo Gibson
Wild Thing by Robin Kaye
The Last Boleyn by Karen Harper