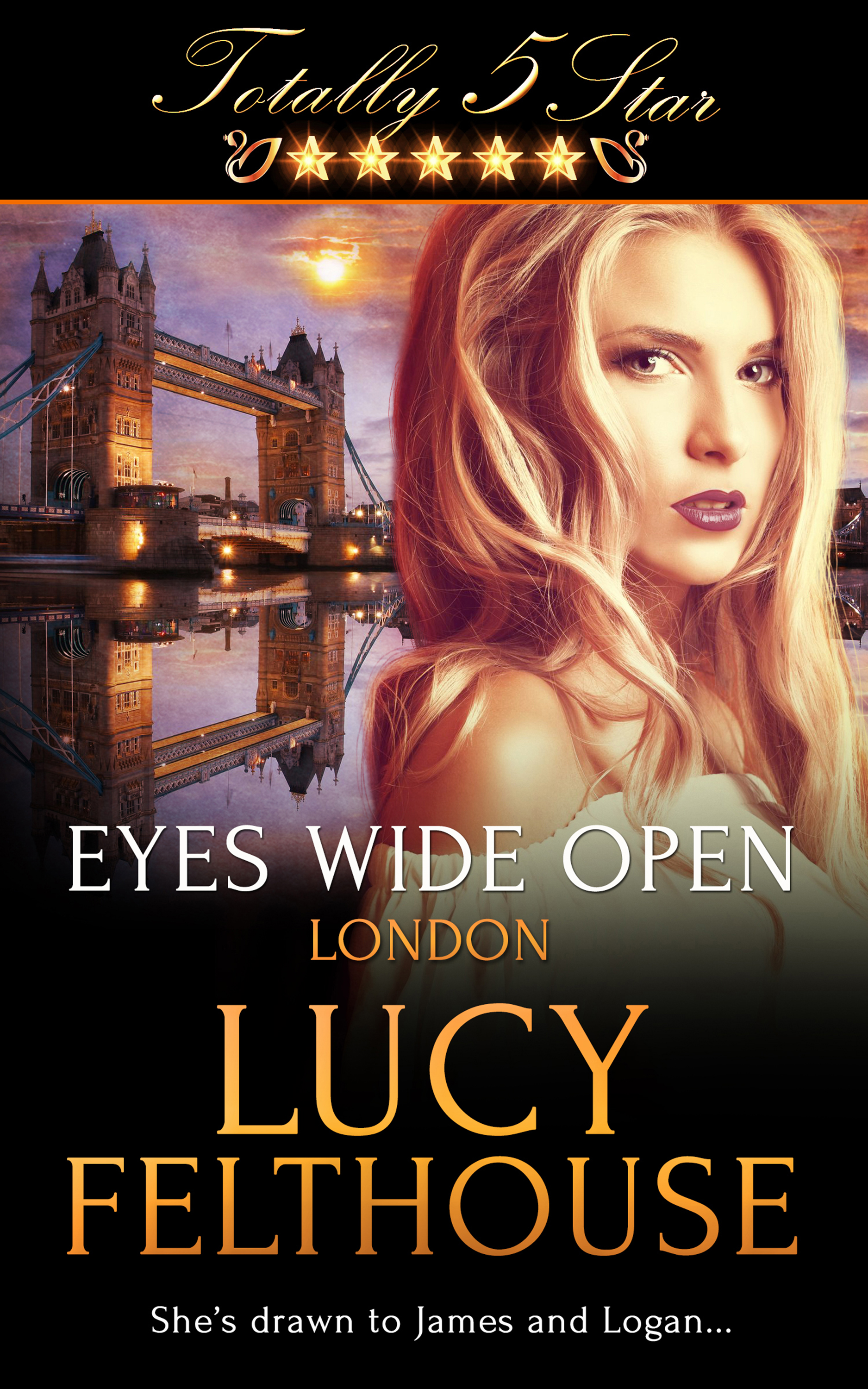 An ordinary girl catapulted into an extraordinary world meets two even more extraordinary men—but what will she do when she discovers their sexy secret?

Fiona Gillespie moved to London shortly after graduating to take advantage of the opportunities the capital could offer. However, months later, she’s still living in a horrid flat and working in a grimy East End pub. The problem is, she doesn’t really know what she wants to do, career-wise. So when she happens upon an advertisement for a job at a plush Mayfair hotel, she jumps at the chance. A great deal of determination and a spot of luck land Fiona her dream role.

But working at the Totally Five Star London is just the beginning. She adores the role and flourishes, impressing her bosses and making her increasingly determined to climb the career ladder.

While her career is flying, though, her love life is non-existent. She hasn’t even thought about men, never mind met or dated one for months, so when she bumps into two gorgeous businessmen in the hotel, she’s surprised to find her head has been well and truly turned. Even more surprisingly, they flirt with her—both of them! She’s drawn to James and Logan, despite feeling that they’re way out of her league.

When a misunderstanding leads Fiona to James and Logan’s sumptuous top-floor suite, she has no idea what she’s about to uncover. Scenes of people-trafficking, drug-pushing and wild sex parties all appear in her active imagination. Yet what she actually sees is something she’d never even considered before, something that piques her interest.

After discovering their sexy secret, what will she do with this new-found knowledge?

To my fellow Brit Babes—thank you for being an endless source of support, advice, encouragement and fun.

To the Brit Babes Street Team—thank you for everything you do. You make me smile every day, and you push me to keep going and writing books for you to (hopefully!) enjoy.

To Ian—thank you for pounding London pavements with me on the research trip for this book.

Last, but certainly not least, to you, the reader—I wouldn’t be doing this without you. So thank you from the bottom of my heart. I hope you enjoy Eyes Wide Open.

‘Look at what you could have won’:
Bullseye
, ITV Studios

Fiona Gillespie wiped a damp cloth half-heartedly over the surface of the bar. It was a pointless exercise. The pub’s fittings and fixtures were so old that no amount of scrubbing would remove the grime that had been ingrained in the wood over the decades. That and the next time she served one of the old drunks that frequented the place, it’d just get beer spilled on it again.

Glancing at her surroundings in distaste, Fiona stifled a derisive snort when she caught sight of the swinging pub sign through the window. It had never really registered before, but
The Royal Oak?
There was nothing remotely royal about the pub in London’s East End where she worked. If an actual royal so much as stepped foot across the threshold, they’d run screaming in the other direction. A shame, really, as a chance to try to woo Prince Harry would not go amiss. She was sure those mischievous eyes and smile hid a multitude of sexy sins. His grandmother would
not
approve.

Abandoning her cloth with a sigh, she reached for a newspaper one of the patrons had left behind. There was hardly anyone in, as usual, so no glasses to collect, tables to wipe, or bowls of nuts to refill. A flick through the paper was her only source of entertainment. Or at least the only thing to stop her going completely out of her mind with boredom.

It wasn’t quite where she’d seen herself when she’d decided to take a chance and move to London for work after graduating from university. But while she figured out her next career move—or
any
career move—this would have to do. It served a purpose—paying her a paltry wage, just enough to cover the rent and bills on her scummy flat, and food. There really wasn’t much left after that, so her social life mainly consisted of vegging in front of the TV with her flatmates.

They’d club together their miniscule amount of disposable income to buy some cheap, supermarket own brand lager and swap stories, either about their pasts or about how their current situation was just temporary—just a stepping stone on their way to success, to high-flying, ridiculously well-paid jobs in the banking world, the publishing industry, in PR, advertising, acting, production, tourism… The list went on.

Fiona was just as determined to get a foot on the career ladder, if not more so. She’d rather scurry back home to her parents in Birmingham with her tail between her legs than stay in this dump for much longer. The only trouble was, the others at least knew what they were aiming for, which particular ladder they were trying to grab hold of. She’d graduated with a first-class honors in creative writing and didn’t have a clue what to do with the damn degree now she had it.

Nobody was approached just for having a degree in creative writing, given a ton of money and told to sit down and write a book. It simply didn’t work like that, more’s the pity. Even the world’s most famous and successful writers had had to start somewhere. And she wasn’t necessarily sure that fiction writing was the way to go, anyway.

A cough, accompanied by a whiff of stale smoke and booze, alerted her to the presence of a customer.

Fixing a smile on her face, she turned to him and said politely, “What can I get you?”

A white-haired, grizzled old guy with yellowing teeth—the teeth he still had, anyway—squinted at her. “Pint, if you’re not too busy reading the bleeding newspaper.”

Holding the smile so firmly in place it hurt her now-gritted teeth, she took the proffered glass and filled it. Placing it back on the bar, she then picked up the money that had been left there. The exact right amount. This guy bought enough pints to know. She murmured her thanks, but she needn’t have bothered. The grumpy old sod was already halfway back to his table, precious beer in hand.

Double checking that there was nothing to be done, she shifted her attention back to the newspaper, figuring it was better than wondering about a career she couldn’t even imagine.

As it happened, the paper wasn’t all that engaging. It was several days out of date, so she knew about all the big news pieces already, and the weather and TV listings were now obsolete. But her interest was piqued when she reached the jobs section. She’d never looked in this particular publication for jobs before, thinking that the online searches she did on various websites were more targeted, more relevant. But then, how could you target a role you didn’t even know you wanted?

Skimming through the ads, she immediately dismissed many of them. She had no wish—or the qualifications—to drive an HGV, look after sick or old people, cold call, sell advertising, work in retail or become a model. But amongst all that was something interesting. Something that maybe, just maybe she could do.

She wasn’t entirely sure what being a PR assistant entailed, but it sounded like a very posh job title, and she could sure as hell tick the box of the phrase in the ad that had caught her eye in the first place.
We’re looking for someone with creative writing skills.

As she read through the information again, excitement bubbled in her stomach. The role was at a top London hotel—in Mayfair, no less—offered live-in accommodation, a generous starting salary, access to all the hotel’s amenities and, best of all, career progression. It was clear they wouldn’t employ just anybody and, if Fiona was honest with herself, they were probably looking for someone with more experience than her—which wasn’t difficult—but she had to give it a go. She had nothing to lose. If she didn’t get it, then she’d have gained some valuable interview experience, and if she did, well, then she’d have well and truly grabbed the bottom rung of the career ladder she’d been striving for.