Face the Music: A Life Exposed 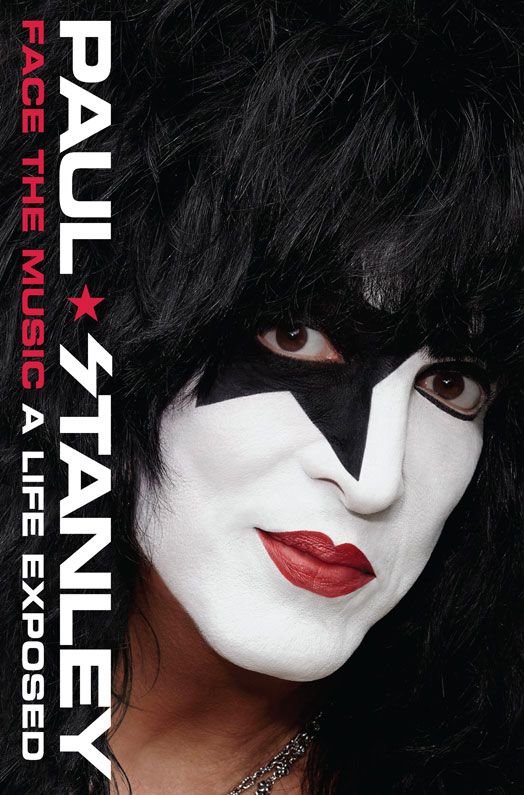 Part I: No place for hiding, baby, no place to run

Part II: Out on the street for a living

Part III: I’ve been up and down, I’ve been all around

Part IV: Under the gun

Part V: The highway to heartache

I
sit down and look in the mirror, staring for a moment into the eyes peering out at me. The mirror is surrounded by high-watt theater-style bulbs, and on the table in front of the brightly lit mirror is a small black makeup case. We hit the stage in about three hours, which means it’s time for the ritual that has defined my professional life for forty years.

First, I wipe my face with an astringent, to close the pores. Then I grab a container of “clown white,” a thick, cream-based makeup. I dip my fingers into the tub of white goo and start applying it all over my face, leaving some space open around my right eye, where the rough outline of the star will be.

There was a time when this makeup was a mask—hiding the face of a kid whose life up to then had been lonely and miserable. I was born with no right ear—I’m deaf on that side, too—and the most searing early memories I have are of other kids calling me “Stanley the one-eared monster.” It was often kids I didn’t even know. But they knew me: the kid with a stump for an ear. When I was out among people I felt naked. I was painfully aware of being constantly scrutinized. And when I came home, my family was too dysfunctional to provide any kind of support.

Once the white is on, I take the pointed end of a beautician’s comb, one with a metal point, and sketch the outline of the star, freehand, around my right eye. It leaves a line through the white makeup. Then with a Q-tip I clean up the inside of the star. I also clean up the shape of my lips.

The character taking shape on my face originally came about as a defense mechanism to cover up who I really was. For many years when I first put this makeup on, I had a sense of another person coming out. The insecure, incomplete kid with all the doubts and all the internal conflicts suddenly got painted away, and that other guy came out, the guy I had created to show everybody that they should have been nicer to me, that they should have been my friend, that I was someone special. I created a guy who
would
get the girl. People I’d known earlier in life were astonished by my success with KISS. And I understand why. They never knew what was going on inside me. They never knew why I was the way I was, what my aspirations were. They never knew any of that. To them I was just a fuck-up or a freak. Or a monster.

Next, I get up and go into another room—there’s usually a bathroom adjoining the dressing rooms. I hold my breath and powder my entire face with white powder. This fixes the white to my face and allows me to sweat through it during the show. At this point I can touch the white and it doesn’t come off on my finger. I learned this part of the process by trial and error—early on I would be blinded by the makeup running into my eyes.

I reveled in being
that guy
.

But sooner or later, I had to go back down the stairs. I had to come off stage. When you come down those steps you are confronted with the totality of your life. For many years, all I could think when I left the stage was,
Now what?
Back then, home was a sort of purgatory. During the short periods when KISS was not on the road I would sit on the sofa in my New York City apartment and think,
Nobody would believe that I’m home and have no fucking place to go.
The band was my life-support system, but it was also a way to stave off establishing the types of relationships that constitute a real life. At home, all I felt was a hunger: an important need wasn’t being addressed, wasn’t being filled by anything else. In one sense, I was always on my own—remote and inaccessible; but in another sense, I couldn’t stand to be on my own.

With time, the line between the character and the man blurred. I began to take part of that guy offstage with me. Girls wanted that guy. People just assumed I
was
that guy. Still, I knew I really wasn’t that guy. I could suspend reality onstage, but I couldn’t sustain it; getting through a whole day as the Starchild was difficult. Because I didn’t believe it. I knew the truth. I knew who I really was.

I was also very defensive. When people around me poked fun at each other, I could dish it out but I couldn’t take it. I knew it must be much nicer to be able to laugh at yourself, to laugh about your own quirks and shortcomings, but I still couldn’t get myself to that place. I couldn’t let go—it was an instinctive reaction to having been constantly scrutinized and ridiculed as a child. I was still too insecure, too self-conscious. Though I didn’t fully understand it myself (and nobody around me did either, since I never revealed anything about my ear), I was still fueled by the bitterness of my past. I imbued my jokes with undertones of maliciousness at other people’s expense.

Hit me once and I’ll hit you twice.

It’s easy to live your life with your hand closed. But you get nothing with a fist that you can’t get in multitudes with your hand open. Unfortunately, that message was lost on me for a long, long time. And throughout that time, I felt a sense of struggle within, a sense of dissatisfaction, inadequacy, and profound loneliness.

After the white makeup is fixed with powder, I go back into the dressing room, sit down at the mirror again, and brush away any powder inside the shape of the star around my eye. Next, I trace the outline of the star with a black eyebrow pencil. Then I take black grease paint, which is a little waxier than the clown white, and use a brush to paint in the star. I go into the other room again and fix the black makeup with talcum-based baby powder, which is less opaque than the white theatrical powder on the rest of my face. I return to the dressing room and line my left eye and eyebrow with black waterproof eyeliner. As it dries, I look in the mirror.

In earlier periods of my life, I didn’t necessarily like the person I saw when I looked in the mirror. But I was trying—trying to become the person I wanted to be as opposed to remaining complacent. The problem was, no matter what I tried, nothing seemed to get me where I wanted to go. As KISS endured its ups and downs, I realized at various turns that many of the assumptions I held about what would satisfy me—or perhaps just make me comfortable with myself—had been wrong. I thought the fix was being famous. I thought the fix was being rich. I thought the fix was being desirable. By 1976, with the success of the
KISS Alive!
album, we became famous. But I found that rubbing my fame in people’s faces didn’t make me feel any better. By the end of the 1970s, we had made millions of dollars. But I found that the money—and the clothes, and the cars, and the collectible guitars I bought with it—didn’t make me happy either. And as far as being desirable, from the moment of the release of our first album, sex was available any time and all the time. But I found I could be with somebody and still feel alone. I once heard someone say that you’re never more alone than when you’re sleeping with the wrong person. That’s true. And while there are worse ways to suffer than bedding
Penthouse
Pets and
Playboy
Playmates, the happiness of those experiences proved transient. Exhilarating, yes, but momentary. I learned that none of it—while enjoyable—could take the place of whatever I felt was missing inside of me.

When KISS eventually took off the makeup in 1983, I occupied the Starchild character even more—or rather, the character occupied me. My own face became the face of the Starchild. I had banished to some extent the shy, defensive, unpopular kid inside, but I hadn’t replaced or rebuilt him. I was something of a shell, an empty vessel. I was still searching for the person I might become, and the Starchild—now without the visible star—remained very much the mask I wore to interact with the world. But I still found—or at least, I
believed
—that keeping people at arm’s length was easier than dealing with them in a more personal and intimate way. After all, in order to be comfortable with other people, you have to be comfortable with yourself. And I still wasn’t. As a result, my life wasn’t adding up correctly. Where was the family? Where were the friends? Where was the place to call home?

There was simply no getting away from the fundamental truth that I still wasn’t comfortable in my own skin. When you can’t get away from the truth, you either numb yourself or fix yourself. It’s that simple. And it’s in my makeup—no pun intended—to fix myself, not numb myself. Even at the most painful moments of my life—when my band seemed to be falling apart, when people around me fell by the wayside because of drugs, when I lay crumpled on the floor in despair after I got divorced from my first wife—a sense of self-preservation and an urge to improve myself always overrode any other impulses.