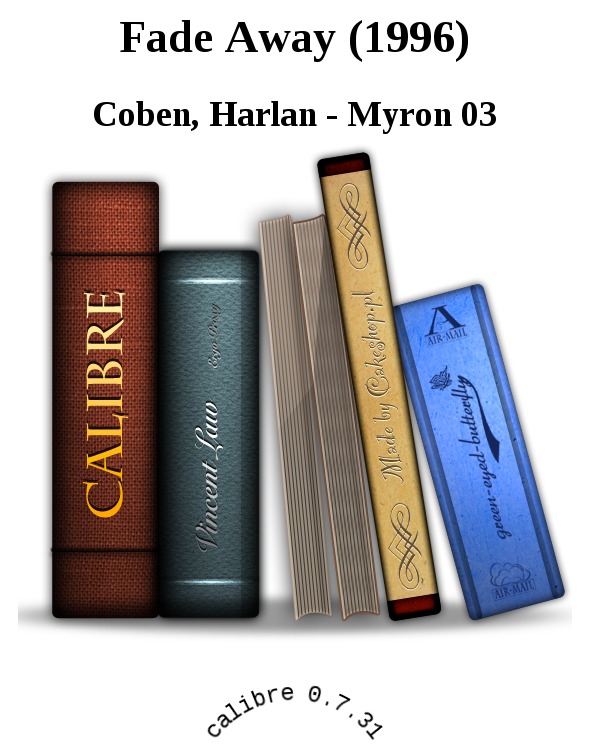 Myron Bolitar was being led through the corridor of the darkened Meadowlands Arena by Calvin Johnson, the New Jersey Dragons new general manager. Their dress shoes clacked sharply against the tile and echoed through empty Harry M. Stevens food stands, Carvel Ice Cream carts, pretzel vendors, souvenir booths. The smell of sporting-event hot dogs - that sort of rubbery, chemically, yet nostalgically delicious aroma wafted from the walls. The stillness of the place consumed them; there is nothing more hollow and lifeless than an empty sports arena.

Calvin Johnson stopped in front of a door leading to a luxury box. 'This may all seem a bit strange,' he said. 'Just go with the flow, okay?'

Calvin reached for the knob and took a deep breath. 'Clip Arnstein, the owner of the Dragons, is in there waiting for us.'

'And yet I'm not trembling,' Myron said.

Calvin Johnson shook his head. 'Just don't be an ass.'

Myron pointed to his chest. I wore a tie and everything.'

Calvin Johnson opened the door. The luxury box faced midcourt. Several workers were putting down the basketball floor over the hockey ice. The Devils had played the night before. Tonight was the Dragons' turn. The box was cosy. Twenty-four cushioned seats. Two television monitors. To the right was a wood-paneled counter for the food - usually fried chicken, hot dogs, potato knishes, sausage and pepper sandwiches, that sort of stuff. To the left was a brass cart with a nicely stocked bar and minifridge. The box also had its own bathroom - this so the corporate high rollers would not have to urinate with the great unwashed.

Clip Arnstein faced them, standing. He wore a dark blue suit with a red tie. He was bald with patches of gray over both ears. He was burly, his chest still a barrel after seventy-some-odd years. His large hands had brown spots and fat blue veins like garden hoses. No one spoke. No one moved. Clip glared hard at Myron for several seconds, examining him from head to toe.

The old man made no movement toward them. 'How old are you now, Myron?'

'You playing any ball?'

'You keep in good shape?'

'No, that won't be necessary.'

No one offered Myron a seat and no one took one. Of course the only chairs in here were the spectator seats, but it still felt weird to stand in a business setting where you're supposed to sit. Standing suddenly became difficult. Myron felt antsy. He didn't know what to do with his hands. He took out a pen and held it, but that didn't feel right. Too Bob Dole. He stuck his hands in his pockets and stood at a weird angle, like the casual guy in the Sears circular.

'Myron, we have an interesting proposition for you,' Clip Arnstein said.

'Yes. I was the one who drafted you, you know.'

'Ten, eleven years ago. When I was with the Celtics.'

'I know all this, Mr Arnstein.'

'You were a hell of a prospect, Myron. You were smart. You had an unbelievable touch. You were loaded with talent.'

'I coulda been a contenda,' Myron said.

Arnstein scowled. It was a famous scowl, developed over some fifty-plus years in professional basketball. The scowl had made its first appearance when Clip played for the now-defunct Rochester Royals in the forties. It grew more famous when he coached the Boston Celtics to numerous championships. It became a legendary trademark when he made all the famous trades ('clipping' the competition, ergo the nickname) as team president. Three years ago Clip had become majority owner of the New Jersey Dragons and the scowl now resided in East Rutherford, right off Exit 16 of the New Jersey Turnpike. His voice was gruff. 'Was that supposed to be Brando?'

'Eerie, isn't it? Like Marlon's actually in the room.'

'Is there something I can do for you, Mr Arnstein?'

'You never played in a single professional game, did you, Myron?'

'You know very well I didn't.'

Clip nodded. 'Your first preseason game. Third quarter. You already had eighteen points that game. Not bad for a rookie in his first scrimmage. That was when fate took over.'

Fate took the form of big Burt Wesson of the Washington Bullets. There had been a collision, a searing pain, and then nothing.

'I always felt bad about what happened to you. Such a waste.'

'That's why I'd like to give you another chance.'

Neither one was laughing. 'Where is it?' Myron asked.

'The camera. This is one of those hidden camera shows, right? Is this the one with Ed McMahon? I'm a big fan of his work.'

'It must be, Mr Arnstein. I haven't played competitive ball in ten years. I shattered my knee, remember?'

'All too well. But as you said, it was ten years ago. I know you went through rehabilitation to rebuild it.'

'And you also know I tried a comeback. Seven years ago. The knee wouldn't hold up.'

'It was still too early,' Clip said. 'You just told me you're playing again.'

'Pick-up games on weekends. It's a tad different than the NBA.'

Clip dismissed the argument with a wave of his hand. 'You're in shape.

You even volunteered to flex.'

Myron's eyes narrowed, swerving from Clip to Calvin Johnson, back to Clip. Their expressions were neutral. 'Why do I have the feeling,' Myron asked, 'that I'm missing something here?'

'Perhaps I should be less' - Clip paused, searched for the word 'opaque.'

Myron waited again. When no one continued, he said, 'It's still a bit opaque.'

Clip let loose a long breath. He walked over to the bar, opened a small hotel-style fridge, and removed a can of Yoo-hoo. Stocking Yoohoos.

Hmm. Clip had been prepared. 'You still drink this sludge?'

He tossed Myron the can and poured something from a decanter into two glasses. He handed one to Calvin Johnson. He signaled to the seats by the glass window. Exactly midcourt. Very nice. Nice leg room too. Even Calvin, who was six-eight, was able to stretch a bit. The three men sat next to one another, all facing the same way, which again felt weird in a business setting. You were supposed to sit across from one another, preferably at a table or desk. Instead they sat shoulder to shoulder, watching the work crew pound the floor into place.

He sipped his whiskey. Calvin Johnson just held his. Myron, obeying the instructions on the can, shook his Yoohoo.

'If I'm not mistaken,' Clip continued, 'you're a lawyer now.'

'You're a sports agent.'

'For the most part, they're bloodsucking leeches.'

Clip Arnstein leaned forward, his eyes zeroing in on Myron's. 'How do I know I can trust you?'

Myron pointed at himself. 'My face,' he said. 'It screams trustworthiness.'

Clip did not smile. He leaned a little closer. 'What I'm about to tell you must remain confidential.'

'Do you give me your word it won't go any farther than this room?'

Clip hesitated, glanced at Calvin Johnson, shifted in his seat. 'You know, of course, Greg Downing.'

Of course. Myron had grown up with Greg Downing. From the time they had first competed as sixth graders in a town league less than twenty miles from where Myron now sat, they were instant rivals. When they reached high school, Greg's family moved to the neighboring town of Essex Fells because Greg's father did not want his son sharing the basketball spotlight with Myron. The personal rivalry then began to take serious flight. They played against each other eight times in high school, each winning four games. Myron and Greg became New Jersey's hottest recruits and both matriculated at big-time basketball colleges with a storied rivalry of their own - Myron to Duke, Greg to North Carolina.

During their college careers, they had shared two Sports Illustrated covers.

Both teams won the ACC twice, but Myron picked up a national championship. Both Myron and Greg were picked first-team Ail-American, both at the guard spots. By the time they both graduated, Duke and North Carolina had played each other twelve times. The Myron-led Duke had won eight of them. When the NBA draft came, both men went in the first round.

The personal rivalry crashed and burned.

Myron's career ended when he collided with big Burt Wesson. Greg Downing sidestepped fate and went on to become one of the NBA premier guards. During his ten-year career with the New Jersey Dragons Downing had been named to the All-Star team eight times. He led the league twice in three-point shooting. Four times he led the league in free-throw percentage and once in assists. He'd been on three Sports Illustrated covers and had won an NBA championship.

'Do you talk to him much?' Clip Arnstein asked.

'When was the last time you spoke?'

'Within the last few days?'

'Oh,' Clip said. He took another sip. Calvin had still not touched his drink. 'Well, I'm sure you heard about his injury.'

'Something with his ankle,' Myron said. 'It's day to day. He's in seclusion working on it.'

Clip nodded. 'That's the story we gave the media anyway. It's not exactly the truth.'

'Yes.' Clip took another sip. Myron sipped back, not an easy task with Yoohoo.

'Since when?' Myron asked.

Myron looked at Calvin. Calvin remained placid but he had that kind of face. During his playing days, his nickname had been Frosty because he never displayed emotion. He was living up to his name now.

Myron tried again. 'When you say Greg is missing--

'Gone,' Clip snapped. 'Disappeared. Into thin air. Without a trace.

Whatever you want to call it.'

'Have you called the police?'

Clip gave him the wave-off again. 'You know Greg. He's not a conventional guy.'

The understatement of the millennium.

'He never does the expected,' Clip said. 'He hates the fame. He likes to be on his own. He's even disappeared before, though never during a playoff drive.'