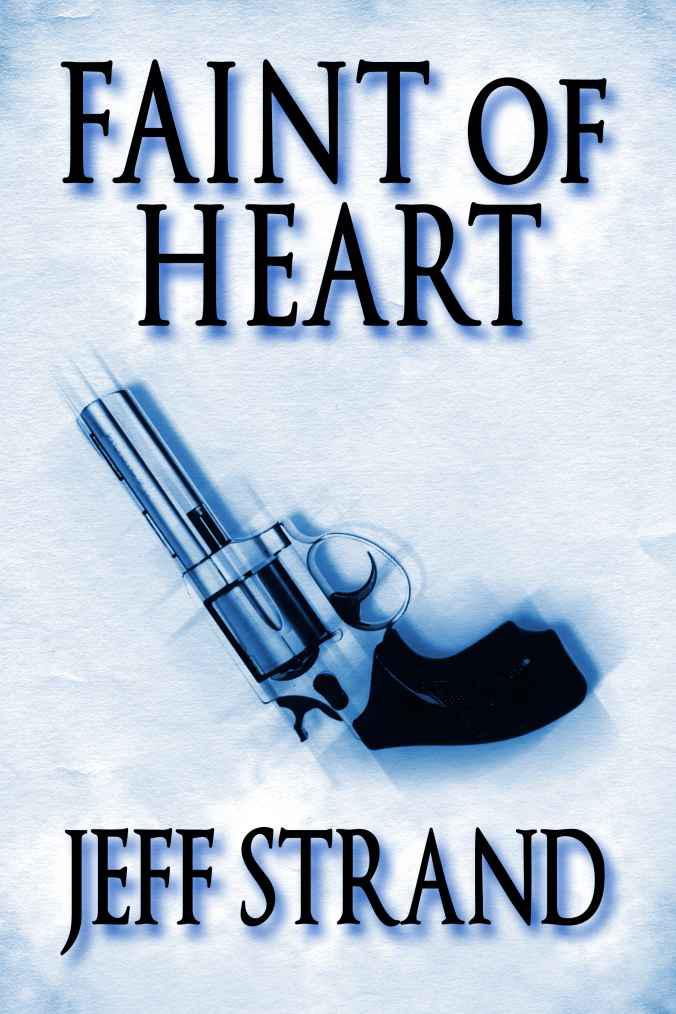 This book is a work of fiction. Names, characters, places, and incidents are either products of the author's imagination or are used fictitiously. Any resemblance to actual events, locales, or persons, living or dead, is entirely coincidental. No part of this publication may be reproduced or transmitted in any form or by any means, electronic or mechanical, without written permission from the author.

For more information about the author, visit
http://www.JeffStrand.com

"Wake up, you lazy bastards! Get your lard-filled asses out of bed and greet the sunny new day! Except that it's not sunny, because the freakin' sun hasn't even risen yet! Get the [
bleep
] up anyway! I don't give a flying [
bleep
] if it's Saturday! If I have to be up, so do you! And call us and request a song so that we know what you lazy bastards want to listen to! Come on, pick up the [
bleep
]ing phone!"

Rebecca decided that she didn't much care for this weekend deejay, any more than she liked the way Gary left the alarm clock on the other side of the bedroom. His rationale was that actually having to get up to shut it off would keep him from endlessly hitting the snooze button every morning, while Rebecca believed that snooze alarms were a God-given right to everyone foolish enough to have a job that required getting out of bed.

Gary got up, tiptoed across the floor to make as little foot contact with the cold wood as possible, and shut off the alarm. His briefs had ridden up during the night and transformed themselves into a makeshift thong. She whistled appreciatively.

"Don't look at me like I'm some piece of meat," Gary said, in mock annoyance. "I have a personality too, somewhere."

"You can't bite into a personality."

He tiptoed over to the closet. "Why do we keep this house so cold?"

"Because the sane members of this household stay in bed on weekends. You should join them."

"If I could cancel, I probably would." He took a towel down from the upper shelf. "Do I need to save you any hot water?"

She snorted. "Do I look like I'm getting up any time soon?"

"I thought maybe you might make me breakfast, pick out my clothes, pack the car for me..."

He grinned and tiptoed into the bathroom. Rebecca snuggled deeper into the covers. She loved cold autumn mornings when she didn't have to get up. She particularly loved cold autumn mornings when neither of them had to get up, but for some deranged reason Gary wanted to spend the weekend camping with a couple of his buddies. She couldn't even call it temporary insanity, since they'd been planning it for over a month.

She lay in bed, listening to the shower. She was briefly tempted to sneak in there with him, but unfortunately an extremely cold floor stood between her and the man to whom she'd pledged her eternal love. It might as well have been the Grand Canyon. She wasn't going anywhere.

About ten minutes later, Gary stepped out of the bathroom, hair combed and a towel around his waist. He hadn't shaved (probably going for the rugged outdoorsman look already) but he still looked damn good. Though he was on the thin side, playing racquetball three times a week was certainly keeping him in shape.

"Stop right there. That's an unauthorized towel," she informed him in a stern voice. "Drop it immediately."

"No way. It's freezing out here. I thought you were going to fix breakfast and get my clothes and pack the car and all that stuff?"

"The blankets overpowered me."

Gary walked over to the dresser and took a pair of socks and clean underwear out of the top drawer. Then he dropped the towel.

Rebecca sucked in an exaggerated breath. "Oh, gracious, what is this heavenly sight before my eyes?" she asked, adopting a Southern belle accent. "It would appear to be my darling husband's ass! Glory be!"

Gary stepped into his briefs. "So what are your plans this weekend?"

"Well, first I thought I might sleep in another ten, fifteen hours. Then I figured I'd get up and daydream about going back to bed. Then I'd make my dream come true."

"You know," said Gary, sitting on the edge of the bed, "if you ever tried camping, you'd probably love it."

"Yes. You'd hate its guts." He began to put on his socks.

"Anyway, you wouldn't want me out there interfering with you and your buddies getting in touch with your masculine sides. All that belching and scratching and spitting and tugging. No place for a woman."

Gary patted her foot, or at least the three layers of blanket on top of her foot. "Are you going to be okay by yourself?"

Damn. Why had he brought that up?

Of course, it was a perfectly legitimate question, but not something she wanted to think about while she was all warm and comfy in bed. She didn't want to think about spending the weekend alone.

"I'm twenty-eight, I think I can handle staying by myself for a couple of days." She tried to keep the edge out of her voice, but didn't completely succeed.

He frowned. "Are you
sure
there's nobody you can stay with?"

"Gary, I'll be fine, really. I've stayed by myself before."
And jumped at every noise, and didn't sleep for a second, and nearly died of a heart attack every time the phone rang
.

"But not for an entire weekend."

"Again: Twenty-eight. Not six. Don't worry about me. I want you to have fun." She grinned. "Now hurry up and get dressed!"

"I'll try to give you a call tonight. In case we have reception problems don't worry if I'm not able to, but hopefully the cell phone should work fine."

He crawled over her, gave her a quick kiss, then got off the bed and went to get his clothes out of the closet. Rebecca was going to have a good time this weekend. She was going to sleep, watch television, read a book or two, and contribute nothing of any productive value whatsoever to society. She was a mature adult, she didn't believe in the Boogey Man, and she'd be perfectly fine staying at home by herself for two short little days.

While Gary threw his camping gear into the back of the car, leaving barely enough room for the unfortunate guy who got stuck sitting in the back, Rebecca hurriedly got out of bed, scampered into the cold kitchen, and went to work preparing a bagel with grape jelly. Let it never be said that Rebecca Harpster was a woman who didn't know the meaning of sacrifice.

She peeked through the window at the outside thermometer. Thirty-two degrees. A typical October morning in interior Alaska, which meant that you'd have to be completely nuts to want to go camping. She and Gary had already been through one Alaskan winter, so she knew that
much
colder temperatures were on their way, but she was still a thin-blooded Florida girl at heart. At least there wasn't any snow yet.

She handed Gary the bagel as he walked back inside. "Wow, thanks!" he said. "I knew you loved me."

"Yes, I do." She gave him a kiss. Followed by another, longer one, with a bit of tongue.

He pulled away. "You're making it really difficult to go out wandering through the woods with a couple of ugly guys."

She kissed him again. "Is that so?"

"Then ditch them. Tell them your wife was so alluring that you couldn't help yourself. They'll forgive you."

"That does sound fun. Maybe just a quickie..."

She gently shoved him away. "Go. You don't want to keep your friends waiting. Tell Scott and Doug that I said hi."

Gary gave her another kiss, a quick slap on the rear with his Hands of Ice, and left the house. She watched through the window as he got in the car and drove off.

In fact, she'd be fantastic. How often did she have weekends with nothing to do? No errands to run, no papers to grade, no social obligations to fulfill...this weekend was going to be absolute paradise.

And when it got dark outside, well, she'd turn on all the lights, pop in a Marx Brothers movie, and enjoy herself. She'd been married to Gary for five years, and if she couldn't handle him leaving for a weekend every half-decade, then she had serious problems.

She went into the bathroom and looked in the mirror. Now, see, if there was anything to
truly
be scared of during Gary's absence, it was her reflection. Her brown hair looked like somebody had taken an electric mixer to it. She also had a bit of dried drool on the right side of her mouth, and she could stand to lose a good ten pounds (taking her to a place where the health experts said she could stand to lose another ten pounds, which was fine with her).

Well, she'd get rid of the drool, but the freaky hair was staying all weekend. And if she did start to get scared, she'd confront her fears by adding a couple of pounds to the amount she could stand to lose.

She didn't have any childhood traumas to work through, no scars to the psyche--she was just your standard-issue chickenshit, and she wasn't going to let that ruin her weekend.