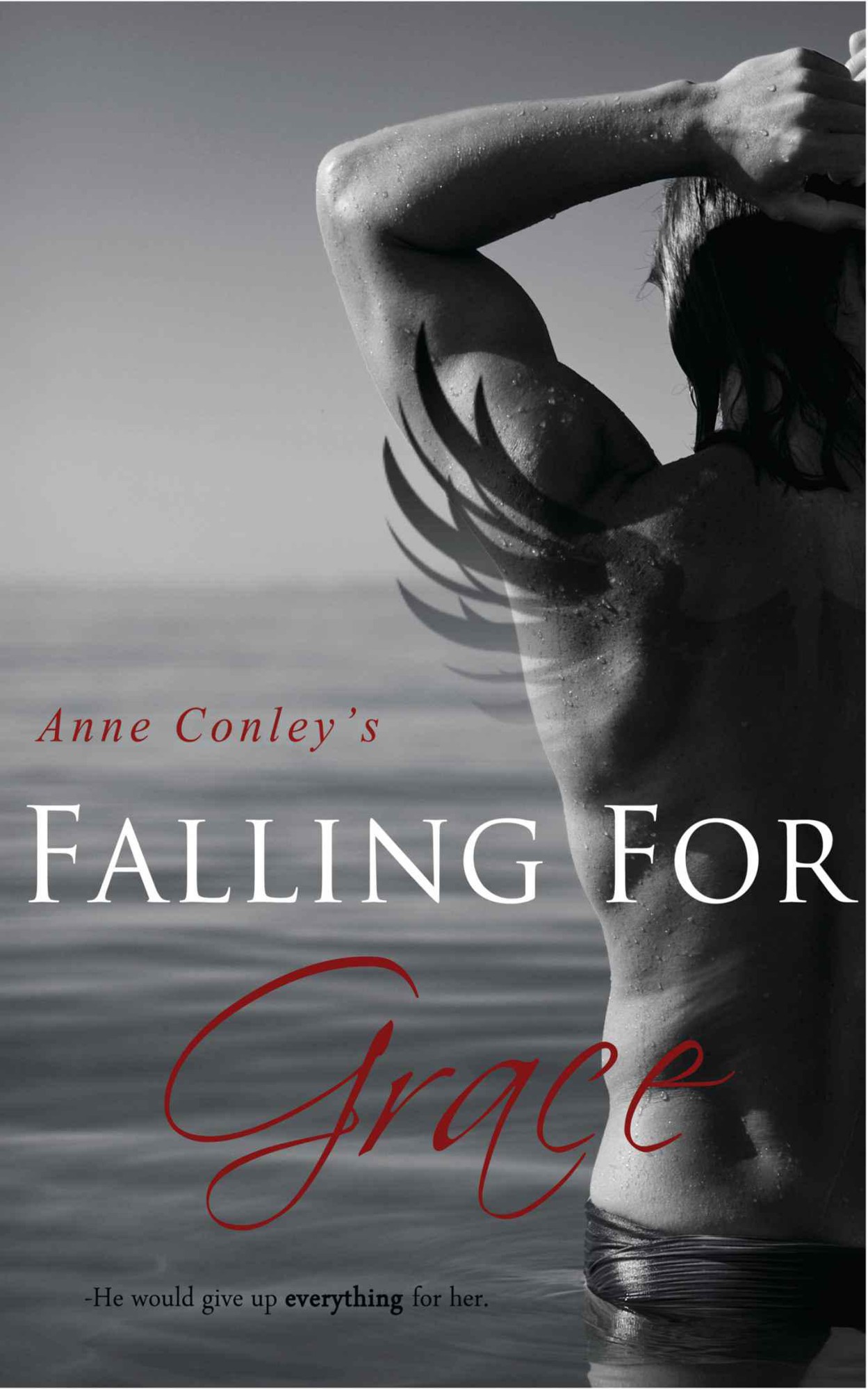 Falling for Grace
Book #2 in the Four Winds Series

Discover other titles by Anne Conley at
Amazon.com

This ebook is licensed for your personal enjoyment only.  This ebook may not be re-sold or given away to other people.  If you would like to share this book with another person, please purchase an additional copy for each recipient.  If you're reading this book and did not purchase it, or it was not purchased for your use only, then please return to Amazon.com and purchase your own copy. Thank you for respecting the hard work of this author.

The characters and events portrayed in this book are fictitious.  Any similarities to real persons, living or dead are purely coincidental and not intended by the author.

He used to be one of the favorites.  He thought back to the time, eons ago, when he was a chosen one.  Sure, he’d screwed up, but who hadn’t?  Was it really worth everything he’d gone through?  He’d suffered enough.  Now was his time.
He
was choosing mates for his Four Winds, and Damien wanted in on the action.  He deserved it, too.  He’d been with Him just as long as the others, even if he had fallen out of favor.

He’d given in too soon to Uri, but this time he would do things differently.  This time, he would get the girl.  He deserved some goodness in his pitiful existence, didn’t he?

The whitecaps crashed onto shore as the hot wind whipped his hair around his face, the sun beating down on his skin.  He swigged from his water bottle as he wrinkled his nose at the smell of refuse from the trash can behind him mixed with the odor of sunscreen and sea salt.

Rafe's eyes wandered the beach, taking in all the people.  The Boss certainly did know what he was doing when he made humans.  They were truly unique, in Rafe's opinion.  The human form was breath-taking.  Rafe looked down at himself.  His body wasn't so bad, either.

His gaze travelled to the lifeguard on the stand in front of him, his reason for being here.  The August heat was oppressive, cooking everything in its ozone, but she seemed impervious to it.  She struck a lazy pose, twirling her whistle to her side while she watched the water.  Rafe knew she was counting swimmers in her zone, constantly counting, alert for signs of distress.

If the human form was a work of art, hers was a masterpiece.  Her long, sun-bleached hair was pulled back into a plait at the base of her neck, and her limbs were toned and tanned.  She held herself with a graceful assurance that contradicted the alertness that laid underneath.  He knew she took her job seriously.  That’s what had drawn her to him in the first place.  Rafe knew that she was a beautiful person inside.

He’d been seeing that for years, but he hadn’t realized how physically attractive she was.

His own corporeal form took a sideline to that of others.  He’d seen himself.  Not often, but he’d been around awhile, and he was familiar with his own musculature, his longish hair, his green eyes that some found arresting.  He knew he was in better physical shape than most, but that was to be expected.

His physical form wasn't one he took very often, but The Boss had given him leave to grant his request.  His plea, really.  Rafe wasn't sure how long he would have to do this, but he knew he only had as much time as a human's life span would allow.  And life was short, wasn't it?  How many lifetimes had he lived through?  Countless.

The sight of a man falling off the jetty in the distance distracted Rafe from his thoughts, and he saw her as she checked through her binoculars while trilling sharp tweets from her whistle.  He watched as she leapt from the stand, backboard over her head, and began running into the water for her save.  He laid back in the sand and closed his eyes.

Grace was half-way through her hour-long morning shift on the stand, scanning her zone, when a man fell of the concrete jetty that jutted out into the bay about two hundred feet.  When he didn't immediately climb out of the water, she blew her whistle, two short, sharp tweets signaling she needed a partner, grabbed the backboard, and ran into the water.

She launched herself toward her target, without thinking about anything besides the save.  She knew that the next lifeguard down the beach would have heard her whistle, seen her run, and called in to headquarters to report it before coming to her aid.  Her supervisor would be out in less than ten minutes to help her and get her report.  All she needed to focus on was getting this man out of the water.

As she swam, being careful to keep the backboard close to her body to reduce the drag it created, her mind played over the steps to getting a victim on it while in the water.  It was something she'd done in training countless times, but in real situations, only a few.

Pumping her arms and legs, she was on autopilot.  She could swim in these waters in a hurricane, with ease.  Today was calm, though. Looking up to check her progress, Grace noticed that the man had floated off a little, but thankfully was wearing a life vest.  She tucked her head in and kept swimming.

As her thoughts were automatically going through the steps of the save, a soft green light permeated the haze of her brain, bringing her a comforting peace.

"It's alright, Grace.  You're doing perfectly."  The words vaguely floated through her subconscious and Grace barely noticed them.  She felt them, but they didn't quite register.  Not paying attention to the voice in her head, only her progress, she made her way to the man, who was bobbing in the waves perilously close to the jetty.

"Sir!  Are you alright?"  She called out to him, as she swam up, gauging his response.  There was none, as his eyes were closed.  She turned to see her backup swimming out to her swiftly. Relieved to see it was Trissa, a girl that she'd worked with before and a good partner, Grace turned back to the man and sprang into action, checking for vitals and responses.

When the other lifeguard got to her, they went to work, attaching the man to the backboard in the water.  Grace attached the straps, while Trissa kept the man's neck stabilized.  Her instincts told her what to do through the green haze.  Automatically, she strapped him onto the board, while Trissa held it down.  Since he'd fallen from the jetty, he could have a concussion, or worse, and she didn't want to potentially aggravate spinal injuries by dragging him through the waves to the shore.

She was vaguely aware of a round of cheers that came after they'd finished buckling the man onto the backboard and started towing him to shore.  She ignored it, as she began her swim back to where she could see Mark standing there, at the ready, to come assist if she gave the signal.

Hauling the man to shore, Grace took a moment to congratulate herself.  This could have been a bad save, and she was glad that the man had been wearing a life preserver.  He was at least breathing with a pulse, although she wouldn't know the extent of his injuries until the ambulance personnel looked him over.  She looked up again, and saw the flashing lights of the ambulance parked on the Sea Wall, as the EMTs traveled down the steps.  They would carry the man up the steps on the backboard before strapping him onto a stretcher and taking him to the hospital.

Grace breathed a relieved sigh, as she and Trissa, with Mark's help dragged the man onto shore to another round of applause, which she ignored.  She was just doing her job.

Her replacement was already on the stand, and Mark gave her and Trissa the nod to go back to headquarters.

"I'll meet you guys over there in a little while.  Just hang out a bit, okay?"  She nodded to him and started the climb up to her truck.  The green haze had left as soon as the man got onto shore, leaving Grace feeling a sense of loss that she couldn't explain.

Headquarters was on the Sea Wall, centrally located close to the middle of the city-run beach.  It contained boats and wave runners, also used for rescues.  Grace grabbed the papers she needed, went to the back office, and started filling them out.  Grace would fill out the sequence of events, and Mark would go back in and fill in the names and contact information she hadn’t gotten.

About halfway through the packet of papers, Brad breezed in, kissing the top of her head.

"No.  Just a fisherman who fell off the jetty."

"You wanna go out tonight?"  He walked around behind her and squeezed her shoulders.

"Nah, not tonight."  She shrugged.

He gave her shoulder one last squeeze.  "Can I come over, then?"

"Yeah."  She leaned back into his fingers, relishing the comfort he was trying to give.  His shoulder massages were awful, but the intent was there, and Grace appreciated it.

Jo Beverley by Forbidden Magic
Cinderella Has Cellulite by Donna Arp Weitzman
Lawful Escort by Tina Folsom
Cast Love Aside by Speer, Flora
Surviving Scotland by Kristin Vayden
Why Do Men Fall Asleep After Sex? by Mark Leyner
Only an Earl Will Do by Tamara Gill
Flirtation by Samantha Hunter
Joan Hess - Arly Hanks 07 by O Little Town of Maggody
Children of Ash: A Meridian Six Novella by Jaye Wells