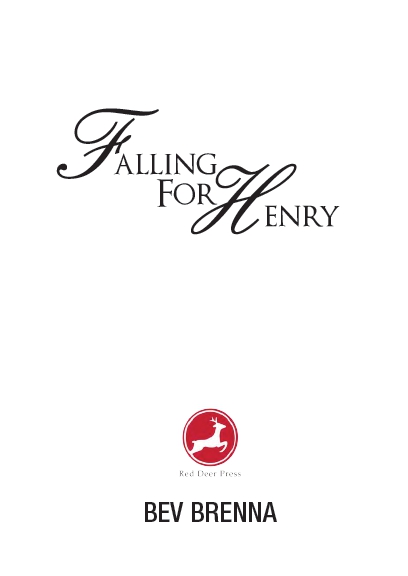 Published in the United States by Red Deer Press, A Fitzhenry & Whiteside Company

All rights reserved. No part of this publication may be reproduced, stored in a retrieval system or transmitted, in any form or by any means (electronic, mechanical, photocopying, recording or otherwise), without the prior written permission of Red Deer Press or, in case of photocopying or other reprographic copying, a licence from Access Copyright (Canadian Copyright Licensing Agency), 1 Yonge Street, Suite 1900, Toronto, ON M5E 1E5, fax (416) 868-1621.

By purchasing this e-book you have been granted the non-exclusive, non-transferable right to access and read the text of this e-book on screen. No part of this text may be reproduced, transmitted, downloaded, decompiled, reverse engineered, or stored in or introduced into any unauthorized information storage and retrieval system, in any form or by any means, whether electronic or mechanical, now known or hereinafter invented, without the express written permission of Red Deer Press.

Edited for the Press by Peter Carver

Summary: A 15-year old girl, lonely after the sudden death of her father, finds herself transported back to the days of Henry VIII's teenage years where she inhabits the body of Katherine of Aragon and has to deal with the increasingly fervent attentions of the young prince.

KATE ALLEN PLODDED down the grassy hill at Greenwich Park. She and twenty other students were bound for the museum, descending through gray drizzle toward the white stone arches that marked the front entrance of London's Royal Naval College. In Fenwick's history class, they'd learned that the Naval College, built on the site of a former Tudor palace, housed a number of sixteenth-century relics. Useless, thought Kate. All useless.

“This whole trip is a waste of time,” she muttered, pushing the hair away from her damp neck. She contemplated the rest of the day, how the teacher would herd them all into some kind of old-fashioned elevator and then lead the final trek home through the walking tunnel under the Thames River. Her heart thudded uncomfortably. Elevators and tunnels were on her list of things to avoid. The thought of small enclosed spaces caused a tight feeling in Kate's chest, and she fought against the old claustrophobic fear, struggling to catch her breath.

How will I ever make myself go through that tunnel?
she thought, miserably.
I'll have a panic attack and everyone will think I'm a loser.
“Or â¦ more of a loser,” she muttered, honest with herself about her profile here at this new school. Then she made a snap decision. She wouldn't go into the museum with the rest of the class. She'd go off and have a look at the walking tunnel by herself. She could try out the elevator and then gradually get used to the tunnel, so that when she had to go there with the group, she wouldn't embarrass herself. She tilted her face skyward, noticing that the rain had stopped. A good omen, she thought, as the sun came out and the tightness in her chest melted away.

As Kate bent down, pretending to tie her shoe, her auburn hair fell forward over her face. Shiny and shoulder-length, this hair was one of the few things she was proud of. She knew she wasn't beautiful, although she wished she were. She made a point of never looking at fashion magazines where all those skinny models inspired an unsettling self-consciousness about what Willow called “a full figure.” Her heightâonly five foot twoâmade it hard to carry the few extra pounds she'd added since summer. How she could be gaining weight was a mystery, as her sister's cooking was terrible, and the meals they had in their tiny student apartment were nothing like what Dad used to make. Gran, whom they saw in Brighton every week or two, was a fabulous cook. Perhaps it was at Gran's where she was gaining the extra pounds. All that clotted cream and jam. Instantly, Kate felt hungry, but she pushed away thoughts of food, concentrating instead on the task at hand.

Kate finished with one shoe and began on the other. Anything to buy some time so that the other students would be well ahead when she took her little detour. She stood up carefully, trying to look nonchalant, and then smoothed down the uniform: navy jacket, navy sweater, white blouse, gray wool skirt. In all these layers she felt egg-shaped.

“Girl Humpty Dumpty rests on the hill,” she muttered, warily eyeing her classmates as they passed. “Avoids walls. Stays as close to the ground as possible.”

Of course, Willow would have looked gorgeous in the uniform. Her sister looked good in anything. Born to be an actress, Kate often thought jealously, knowing that she herself would never dare to think about a future with RADA, the Royal Academy of Dramatic Arts. Not that Kate cared about acting. Willow sometimes demanded that she help her with lines, and reading those scripts aloud was boring, boring, boring. This new playâShakespeare's
Henry VIII
âwas the most tedious of all, and Willow's speeches were long and difficult.

Kate's passion was numbers, mathematical problems where, once you derived the formula, everything fell into place. She wished life was that way, an equation that could be balanced, but in life there were always problemsâvariables you couldn't control. And life these days seemed especially off balance, making her feel as if something inside, the very shell of her being, had been cracked beyond repair.

Humpty Dumpty sat on the wall, Humpty Dumpty had a great fall
, she chanted inside her head as she rested one shoe on the low iron railing that bordered the lawn at the bottom of the hill. With satisfaction, she saw Fenwick walking into the building. “Miss Fenwick,” they were supposed to call her, although behind her back, the “Miss” was easily dropped. It didn't suit her. “Fenwick” was much more representative of the history teacher's pale cropped hair and the long, swift strides that reminded Kate of a greyhound. Relief washed over her that this time she had escaped notice. As she awkwardly clambered over the railing and away from the rest of the group, she darted a look behind to make sure none of her classmates was following. One of the other students, who had separated back from the others, a girl with the unfortunate name of Amandella Hingenbottom, was gazing in her direction.

“Do you 'ave a tissue?” Amandella called in the plummy accent favored by most of the kids at school. Her nose sounded plugged, Kate noted with irritation. People were always sick in London. It must be the dirty air. She shook her head firmly in response to Amandella's question, then turned away. A few moments later, she saw Amandella charging toward their disappearing classmates, becoming the last of the group to enter the large white archways of the College. The last of the group, thought Kate, except for me.

Kate hurried along the walk, ducked around the corner of the building, then leaned against its shadowed wall, panting a little and itchy in her bulky clothes. The sun was out again and the air was like a sauna. She took a deep breath. If she timed it right, she could finish her task and then catch up with the class before the teacher realized she had disappeared.

What would it be like to really disappear?
she wondered.
To vanish without a trace, and never come back â¦
Perhaps no one would notice that, either. It wasn't as if she had any particular friends in London. Or anywhere, she thought, pulling the watch out of her jacket pocket and estimating the time she'd need to get to the footpath and back.

She returned the watch to her pocket. Against her bare skin, watches never kept the correct hour. She'd learned this from experience. Her father had always teased her about being magnetic, but with a twinkle in his eye, she knew he'd meant charming.
Her father
. She felt heavy, missing him, somehow in slow motion, released from the laws of time and space. Lost for a few minutes, she pressed her cheek into the coolness of the shadowed wall and wished again that she could just disappear.
Without a single trace
, she mused.

Then a bell rang out at the top of the hill, marking one o'clock, and Kate came sharply back to reality, hot in the stodgy school uniform. Her father was dead and it wouldn't help to dwell on the accident. Quickly, she removed the jacket and threw it on the grass. Relieved at the resulting change in body temperature, she glanced at the scar on her handâan odd habit that was somehow reassuringâand decided to carry on.

Later, she'd retrieve her jacket. Glancing around to make sure she was not observed, she hurried along the side of the building and then started down toward the waterfront. This, she thought, remembering the teacher's instructions, was the way to the footpath under the Thames River.

AS KATE TRAMPED across the lawn of Greenwich Park, her feet left prints on the damp grass, its limp blades flattened under her oxford shoes. She could have asked Amandella to join her; the other girl never looked very comfortable in the group, and likely she, too, would have enjoyed escape. But who needed company? Not Kate; she was hard as a boiled egg, and better off alone. Would it have been any different if she were still in New York? She thought not. Kicking repeatedly at a lump of turf, she fleetingly wished she'd had friends in New York with whom she'd kept in touch, but somehow it hadn't worked out that way. What was the point? She'd never see any of them again. Since Dad died last spring, she could vanish from the face of the earth and probably no one would care.
I could try harder
, she thought, sending the grass clump flying. Then, just as quickly, she muttered, “Why bother?”